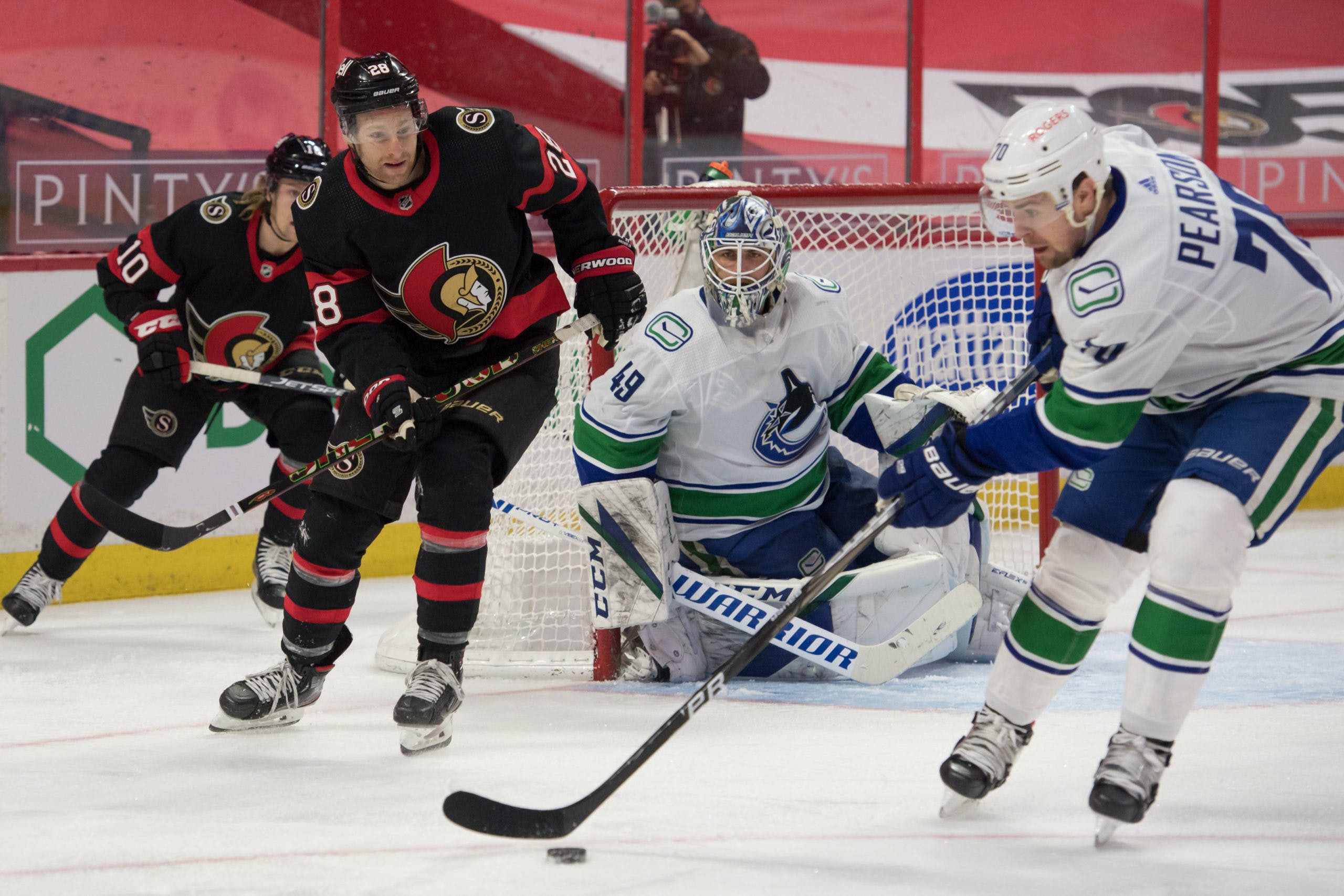 Photo credit: © Marc DesRosiers-USA TODAY Sports
By Faber
1 year ago
Comments
After splitting the Vancouver set, the Canucks travelled to Ottawa to play the first of two road games against the Senators.
They were only able to get 22 shots on the Sens’ young goalie, Marcus Högberg, and went on to lose 2-1.
The big pregame story was: is it Silovs or Silvos?
2001 born Arturs Silovs was forced into action after Thatcher Demko suffered an injury in the morning skate that would keep him out “day-to-day”.
The only issue was, Silovs’ jersey nameplate said “Silvos”, and his name was also written as “Silvos” on the Canucks’ social media post of the lineup.
Our David Quadrelli was on the case as he checked in to see if his son’s name was misspelt.

Confirmed by the #Canucks: The spelling of Arturs Silovs as “Silvos” on his jersey and on the pre game graphic is indeed a mistake that will be corrected. As you were, everyone.

Projected lineup for the #Canucks vs. #GoSensGo

Braden Holtby — or Holbty — got the start between the pipes for the Canucks while the lesser Hög, Marcus Högberg started in the crease for the Sens.
An early affair from Ottawa on a beautiful Monday in Vancouver.
Let’s just get right into it, it’s time for puck drop. Let’s go!

The game began with three quick whistles because that’s hockey baby! After the slow start, the Canucks came out with constant pressure as they were outplaying the Sens in the early portion of the first period.
Advertisement
Ad
Advertisement
Ad
Jimmy Vesey had a good start to the game with an early scoring chance and some good defensive play in the opening five minutes of action. It really makes you wonder if he has done enough to warrant a contract extension with the Canucks as a bottom-six contributor who kills penalties and can bring a sprinkle of offence.
The Sens got the first puck past a goaltender but it was waved off for interference on said goaltender. The disallowed goal still shifted the momentum as the Sens were able to mount their best pressure of the first period for a few shifts after the non-goal.
The Sens hit the post on two scoring chances after Jake Virtanen iced the puck and the Canucks needed to give a push back.
Instead, the Sens scored first, as Brady Tkachuk and Josh Norris came in on a two-on-one after a bad pass from Nate Schmidt. Norris ripped a wrist shot that caught a piece of Holtby and trickled through. 1-0 Sens.
Advertisement
Ad
Advertisement
Ad
Virtanen attempted to fire up the team by dropping the gloves with Ryan Dzingel on the centre ice faceoff after the goal and Virtanen landed a couple of good shots in the scrap.
The Canucks fought back with a pair of strong shifts in the offensive zone that resulted in a seeing-eye shot from Olli Juolevi that found an opening on Högberg. 1-1 after the Juolevi goal.

Olli Juolevi throws the puck at the net and ties the game at 1 late in the first! #Canucks #GoSensGo pic.twitter.com/vQFIsjOXUH

The game stayed tied through 20 minutes. The Canucks led in shots by a count of 11-8.
Quinn Hughes and Travis Hamonic were the leading ice time getters as they each played over eight minutes in the first period.
Advertisement
Ad
Advertisement
Ad
After a deadlocked first period it was time for the middle frame in Ottawa.

The second period began with a couple of good two-on-one chances for Nils Höglander and Bo Horvat. Höglander took the shot on both odd-man rushes. He hit the post on the first one and missed the net on the second.

The next few minutes were pretty quiet and we went through half of the game without a penalty called on either side.
After a long shift, Holtby had a second to cover the puck but he ended up slapping it into the corner and the Canucks were unable to clear the puck. The Sens capitalized on the tired group of Canucks skaters and Drake Batherson ripped a wrist shot from the slot that found twine. 2-1 Sens.
Advertisement
Ad
Advertisement
Ad
Tyler Myers broke his stick in a battle around the crease and then was wandering around the crease without a stick and took a roughing penalty with 5:15 remaining in the period to give the Sens the first power play of the game.
The Canucks were easily able to kill off the penalty to get back to even-strength.
With just over a minute remaining in the period, Dzingel took a holding penalty that gave the Canucks their first power play of the game.
Horvat fired a last-second wrist shot that went through Högberg and rolled to the goal line before Högberg reached back to save it.
The Sens took their 2-1 lead into the third period.
Shots were 13-6 in favour of the Sens in the second period.

The Sens killed off the remainder of the penalty and the Canucks had an uphill battle to go through in the third period.
Advertisement
Ad
Advertisement
Ad
The Canucks were struggling to mount much offence as the period went on. through 50 minutes of play they were only able to get 18 shots on net. That included just one shot in the first 11 minutes of the third period.
This shot total obviously wasn’t ideal against the young and unproven Sens goalie.
The Canucks began to take a few more shots in the latter parts of the period but both teams seemed out of sync in what was a non-eventful third period through 15 minutes.
There was a lot of zone time for the Canucks but they just couldn’t create any dangerous chances. Holtby made a huge save with two minutes remaining to keep it a one-goal game and seconds later he was pulled for the extra man.
Advertisement
Ad
Advertisement
Ad
The Canucks got set up with six attackers on the ice and 90 seconds to try and tie this game.
A few shots were thrown at Högberg but nothing of substance and the Sens held on for a 2-1 win.

This one is obvious to me.

Two years since we lost our friend.

Thinking of @botchford and his loved ones, today and every day.

Tyler Motte: He was moved around the lineup and saw some time in the top-six. Motte led the Canucks in Corsi for percentage with 57.69%. He appears to be back to his normal hustling self and that is a very good thing for the Canucks.

The Canucks are chasing the Montreal Canadiens for the final playoff spot and Monday was a great opportunity to gain ground with a matchup against the bottom-dwelling Senators as their opponents. Unfortunately, the Canadiens won on Monday and the Canucks obviously lost. This now means that the Canucks are 10 points back with five games in hand.
Unlike the rest of us, Braden Holtby says the Canucks aren’t worried about what Montreal is doing.
Advertisement
Ad
Advertisement
Ad
“If we’re going to have any chance of getting into the playoffs, we can’t worry about what Montreal does or any other team,” said the Canucks netminder. “We need to believe we can win every game, and hopefully, that’s enough.”
The Canucks will need to go on a tear through the remainder of the season and that needs to start sooner rather than later. They have back-to-back games this Wednesday and Thursday. Those two games should be must-wins if the Canucks want to get themselves into the playoff picture with less than a month to go in the season.