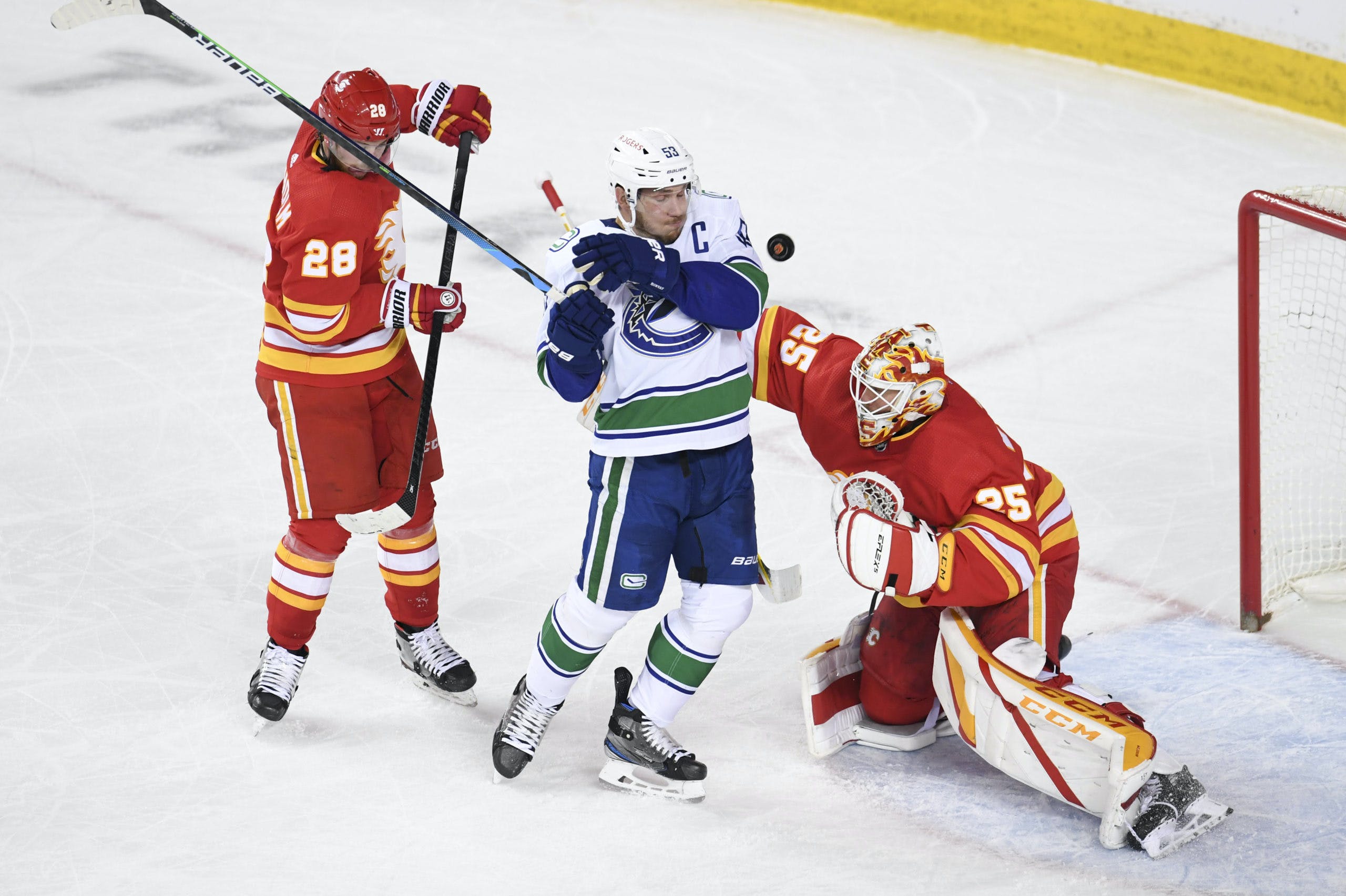 Photo credit: © Candice Ward-USA TODAY Sports
By Faber
1 year ago
Comments
After a rare day off for the Canucks in the month of May, they were back in action tonight to face the Calgary Flames.
It wasn’t an exciting game and the Flames went on to win 4-1. The lone Canuck goal came from Matthew Highmore, that’s the highlight.
After a tremendous start to his NHL career, Jack Rathbone was given the night off in place of Olli Juolevi.
Juolevi drew back into the lineup for the first time since May 3rd.
There were a lot of questions surrounding Travis Green’s comments about him being unable to play Jonah Gadjovich in tonight’s game and he clarified his comments to Brendan Batchelor of Sportsnet 650.

Here's Travis Green's full answer from this morning on the situation with Gadjovich, Lockwood and the lack of recalls. #Canucks @Sportsnet650 pic.twitter.com/UP9i0eclsR

Looks like we will have to wait for next week to see Gadjovich or Will Lockwood play in games. Both are deserving of a chance to show their stuff and will surely get more eyes on them at next year’s training camp.
Advertisement
Ad
Advertisement
Ad
As for the goalies in this game, Thatcher Demko was up against Jacob Markstrom for the Thursday night special.

Projected lines for the #Canucks vs. #CofRed

In a game that meant nothing except where the teams would land for the draft lottery, it’s time to get into it. I’m just hoping for a fun one to cover.
Let’s go!

We had another quick goal to report on when Matthew Highmore scored his first goal as a Canuck on a tip from a Travis Hamonic point shot. 1-0 Canucks.

Matthew Highmore gets his first goal with the #Canucks as he deflects the shot past Jacob Markstrom! pic.twitter.com/D04DmN0qZK

It was the Canucks’ first shot of the game and a good start against Markstrom. It gave Highmore three points in his last five games. The secondary assist went to Brock Boeser.
Just two minutes later, the Flames bounced back to pull even with a goal from Rasmussen Andersson. 1-1 after the Flames goal.
Advertisement
Ad
Advertisement
Ad
I am beginning to get the feeling that my fingers will be tired after this one. The Flames scored another goal just two minutes after their first. Andrew Mangiapane was wide open in front of Demko as Juolevi lost him and he made no mistake burying a tip past Demko. 2-1 Flames.
It was a quick start for both teams as they combined for three goals on five total shots. The game kept up a high pace through the first half of the period with the Flames holding an early lead in scoring chances.
The period took a deep breath in the middle parts, there were some icings and some offsides that derailed the pace of the game. A lot of broken-up passes through the neutral zone and limited extended possessions made for an uneventful dozen minutes after the early excitement.
Advertisement
Ad
Advertisement
Ad
The Canucks were getting some shots late in the period in an attempt to even put the shot share. The Flames were dominant through a strong majority of the period but the Canucks made a late push and finished the period with eight shots compared to the Flames’ nine.
Hamonic and Hughes were the high-men for ice time with each of them being over seven minutes through 20 minutes. We didn’t see a power play in the first period.

The Canucks came out firing in the middle frame. They attempted 10 shots before the Flames even attempted one of their own.
They were able to get eight shots on net before the Flames hit Demko with a puck.
The first 10 minutes just flew by and the Canucks were firing a ton of low-danger shots on Markstrom.
Advertisement
Ad
Advertisement
Ad
The Flames came with some pressure of their own after the halfway point and had some scoring chances on Demko but he was up to the task.
Juolevi took the first penalty of the game late in the period when he hooked Derek Ryan as he went to the net.
The Flames weren’t able to get a shot on Demko during the power play and the penalty expired without much worry to Canucks fans.
Demko was good in the period, he made some big save when his team needed him to get them a cover with the long change. His biggest save came when he sprawled across the crease to make a strong glove save.

J.T. Miller took a hooking penalty with 18.5 second remaining in the period. That gave the Flames their second power play of the game.
Advertisement
Ad
Advertisement
Ad
The Canucks killed off the second period part of the said penalty and went to the third period trailing by one goal.
The Canucks had 14 shots in the period compared to the Flames’ 10. It was a busy period for shots and the Canucks looked much better. They had 13 scoring chances in the period compared to only two in the opening 20 minutes.

The Canucks killed off the remaining time on the Miller penalty and went to work towards erasing the Flames’ one-goal lead.
The Canucks earned themselves their first power play of the game when Johnny Gaudreau took a slashing penalty with 13:19 remaining.
They were looking to bump a 0-18 slump over the past two weeks.
The power play group was strange as it was a half-and-half mix that included Nils Höglander and Nate Schmidt but no Brock Boeser.
Advertisement
Ad
Advertisement
Ad
The second unit featured Alex Edler and had some good scoring chances but Markstrom was there to make the needed saves to maintain a one-goal lead for the Flames.
Things weren’t looking good through 10 minutes.

The Canucks have one (1) shot attempt at even strength in the third.

They were able to get a few shot attempts later in the period but struggled to get real scoring chances. Speaking of real scoring chances, the Flames got one when Elias Lindholm got a partial breakaway with just under five minutes remaining.
Lindholm came in on his forehand side and roofed a wrist shot over Demko’s glove to make it 3-1 Flames.
Jimmy Vesey took an elbowing penalty that was doubled with an unsportsmanlike penalty to give him a four-minute penalty with 4:01 remaining in the game.
It sure felt like the final nail in the coffin for Vesey’s time with the Canucks.
Advertisement
Ad
Advertisement
Ad
Lindholm or Matthew Tkachuk scored a quick power play goal and this game was unofficially over. 4-1 Flames.
For the record, Chris Tanev was getting power play time for the Flames. Good for you, Tanev. Twitter isn’t really engaged with the team right now but one tweet had over 500 replies within 30 minutes of posting:

Thatcher Demko: He kept the team in it up until late in the game.

We are just another step closer to this season being over so that we can all focus on next season.
This loss is a good thing for those who want the Canucks to have the highest position possible in the upcoming draft lottery.
The Canucks next game is Saturday. You can follow their 12:30 PM regular-season game up with game one of the Stanley Cup Playoffs between the Boston Bruins and Washington Capitals.
Advertisement
Ad
Advertisement
Ad