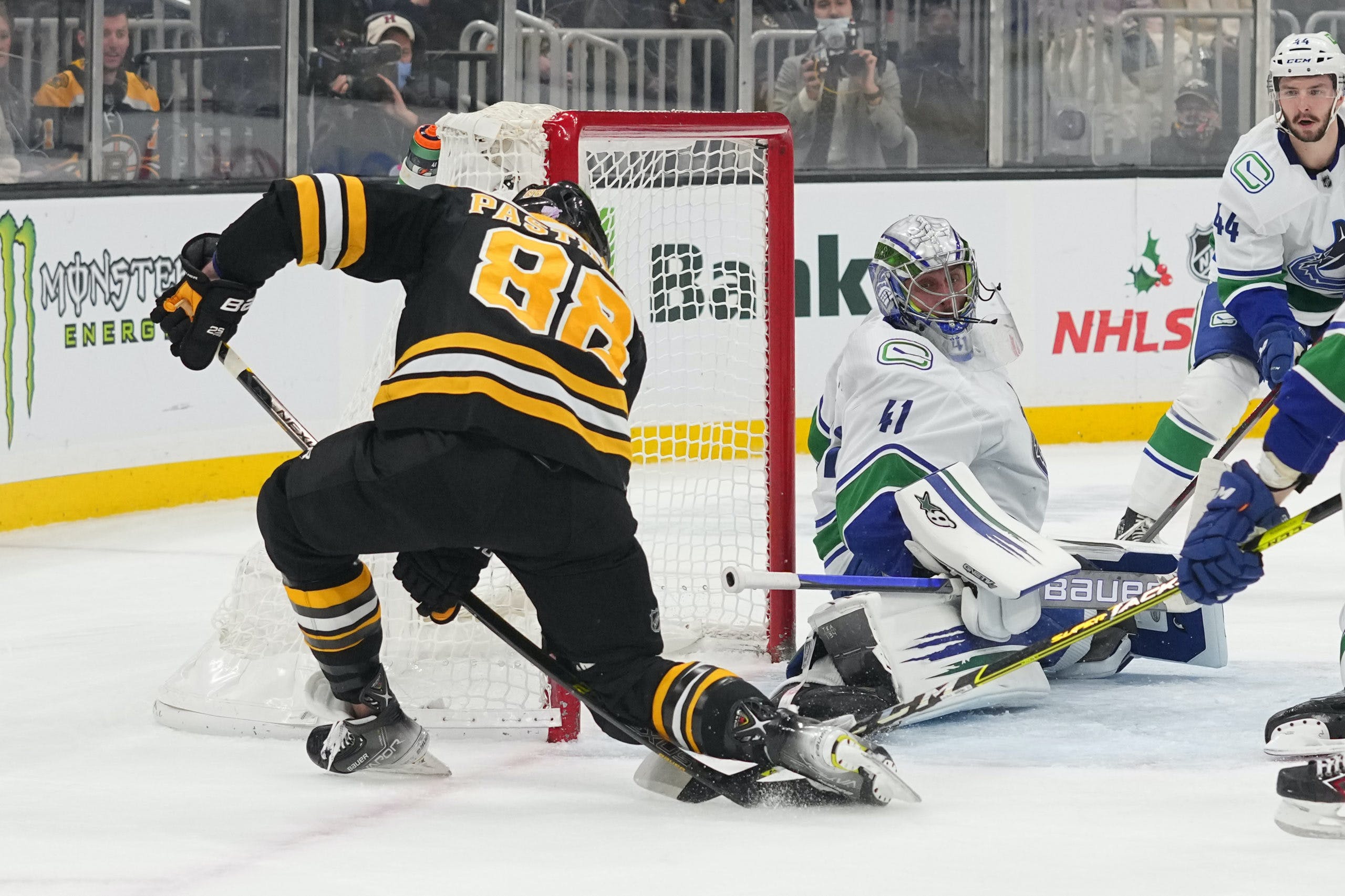 Photo credit: © Gregory Fisher-USA TODAY Sports
By Faber
1 year ago
Comments
Here we go again!
The Vancouver Canucks came into another game with a coach that is uncertain about his job status, a general manager past his due date and a fan base that is tiptoeing away from giving a damn.
They entered game three of a five-game road trip where they lost the prior two games. Sunday night’s match was in Boston as the Canucks faced off against the Bruins.
The Bruins have a pretty good record at home this season. They are 6-3-0 on the year and have an overall record of 10-7-0. No team has played less games than the Bruins, so they are well rested.
Linus Ullmark got the call to the crease for the Bruins while Jaroslav Halak was given the starting spot from Travis Green.

Warmup lines for the #Canucks vs. @NHLBruins

It was the same lineup that we saw on Friday aside from Halak heading in between the pipes.
Advertisement
Ad
Advertisement
Ad
It’s time for the puck to drop as we patiently wait for change.
Let’s go!

The Canucks earned the game’s first power play when Tyler Motte drew an interference penalty. On the ensuing power play, Elias Pettersson ripped a quick one-timer off the post. Then the second unit went to work and scored a strange one where Tanner Pearson redirected a Nils Höglander pass that trickled across the goal line. 1-0 Canucks.

The Bruins immediately bounced back when Halak let in a easy unscreened wrist shot from the blue line. The shot came off the stick of Anton Blidh. Sniper, Anton Blidh. 1-1 after the Bruins goal.
Conor Garland took a holding the stick penalty with 9:46 remaining in the period. That sent the Bruins to their first power play of the game.
Advertisement
Ad
Advertisement
Ad
The Canucks were able to kill off the penalty against the 8th best power play in the league. Halak made a couple of good saves after the power play expired.
Motte drew another penalty on the Bruins and gave the Canucks their second power play of the game.
The Bruins reviewed the goal and it was taken back for offside. 1-1 after the goal was ruled offside.
The period came to an end with both teams having double digit shots in what was a close period.

Aside from the bad goal that he allowed, Halak looked pretty sturdy for the most part. He held his own to deal with the Bruins’ pressure that came immediately after the Pearson goal.
Advertisement
Ad
Advertisement
Ad
This was one of the Canucks’ best first periods of the season. They got shots but more importantly, the shots felt like they had some danger behind them. The Canucks were sending extra bodies towards the net and it felt like they could build on their momentum. We’ll see what happens in the second, though.

The Bruins came out and scored a disallowed goal of their own when Tomas Nosek double kicked the puck past Halak. The score remained tied.
Bo Horvat was showing some grit as he was involving himself in many post-whistle scrums. It was nice to see the captain give a damn and show some frustration about where his team is at.
Garland walked in with a wrist shot from the right side and was slashed to give the Canucks another power play with just under 14 minutes remaining in the period.
Advertisement
Ad
Advertisement
Ad
The Canucks were able to amount much pressure on their power play. The Bruins killed off the penalty.
We went back to even-strength and the Canucks had a quality scoring chance on the rush that led to Kyle Burroughs sliding the puck through Ullmark and right into the post. Garland and Horvat scrambled around the loose puck but were unable to get a handle on the buttery biscuit.
Pressure continued to develop from the Canucks’ offensive zone time. It came to a boiling point when Garland dipped and doodled his way down the left side and ripped a shot past Ullmark with Dickinson in front of the net. 2-1 Canucks.

Conor Garland will take this goal, thank you very much! 😉

Nick Foligno had a scoring chance on Halak’a short side at the end of the period. The Canucks were able to feel good about their first 40 minutes as they went to the locker room with a 2-1 lead.
Advertisement
Ad
Advertisement
Ad

The Canucks had another strong period in which they controlled a good portion of the play but passed the eye test for actually having some dangerous chances. They controlled the analytics as well, with a control of even strength scoring chances.
Garland had a good period as he was up to his usual spinning and cutting in the offensive zone.
Brad Marchand began to run around and throw big hits on players like Oliver Ekman-Larson, Tucker Poolman, and Conor Garland.

Boston came out of the gate firing. They had a long possession in the Canucks’ zone to begin the period. Once the Canucks were able to make their way out of their own zone, they drew a penalty and went to work on another power play.
The Bruins killed off the penalty and we were in a tight one with 13 minutes to go. Höglander took a tripping penalty with 12:39 remaining and the Bruins were gifted a big opportunity to get back even on their power play opportunity.
Advertisement
Ad
Advertisement
Ad
Motte forced a turnover at the blue line and flew down the ice for a wide-open breakaway. He went with a move to the forehand and fired a shot off of Ullmark’s right pad.
The Bruins then set up their offence once again. David Pastrnak fired a shot off the bar and Marchand found the loose puck amongst a wild scramble in front of the net. Marchand fired home the loose puck into a yawning cage and tied the game up. 2-2 after Marchand’s goal.
Both teams were content with simply gaining the zone and firing a shot on the opposing goaltender for a large bulk of the period.
Ekman-Larsson hit Anton Blidh from behind in the corner and that sent the Bruins to the power play with five minutes remaining in the period.
Advertisement
Ad
Advertisement
Ad
The Bruins went to work and scored their second power play goal of the game. Marchand sent the puck across to Pastrnak to give the Bruins the lead. 3-2 Bruins.
Green called a timeout with 46 seconds remaining. Elias Pettersson was not on the ice when the Canucks pulled their goalie and went to attack with an empty net.
There was a disallowed empty net goal as Patrice Bergeron was offside on the play. That gave the Canucks 12 seconds and a faceoff at their own blue line to make a comeback.
They were unable to.
Canucks lose 3-2.

Conor Garland scored a goal, had six shots on net and five individual scoring chances during 17:04 of ice time.

The Canucks played a strong 40 minutes and then everything fell apart on the third period. They were outshot 13-5 at five-on-five and threw away a 2-1 lead as the Bruins scored two goals in the third period.
Advertisement
Ad
Advertisement
Ad
A couple of costly penalties and the inability to execute a penalty kill cost the Canucks a loss on Sunday night.
It sucks, we played well,” said Garland. “We say that a lot but yeah, it stinks. To lose like that sucks.”
It sure does suck. It’s been a tough road for the Canucks and now are 1-8-0 in their last nine games. Garland said that there is still 60 games and if you don’t believe, there’s no point in showing up. Though there was a good effort in Sunday’s game, there have been too many players who look like they don’t believe.
Once again, Pettersson was a ghost. He was the low man when it came to five-on-five ice time for the whole team. He had two shots on net while winning two faceoffs and losing five.
Advertisement
Ad
Advertisement
Ad
No player needs a shakeup more than Pettersson. It might be time for him to be a healthy scratch.
The Canucks are back in action on Monday against the Montreal Canadiens.