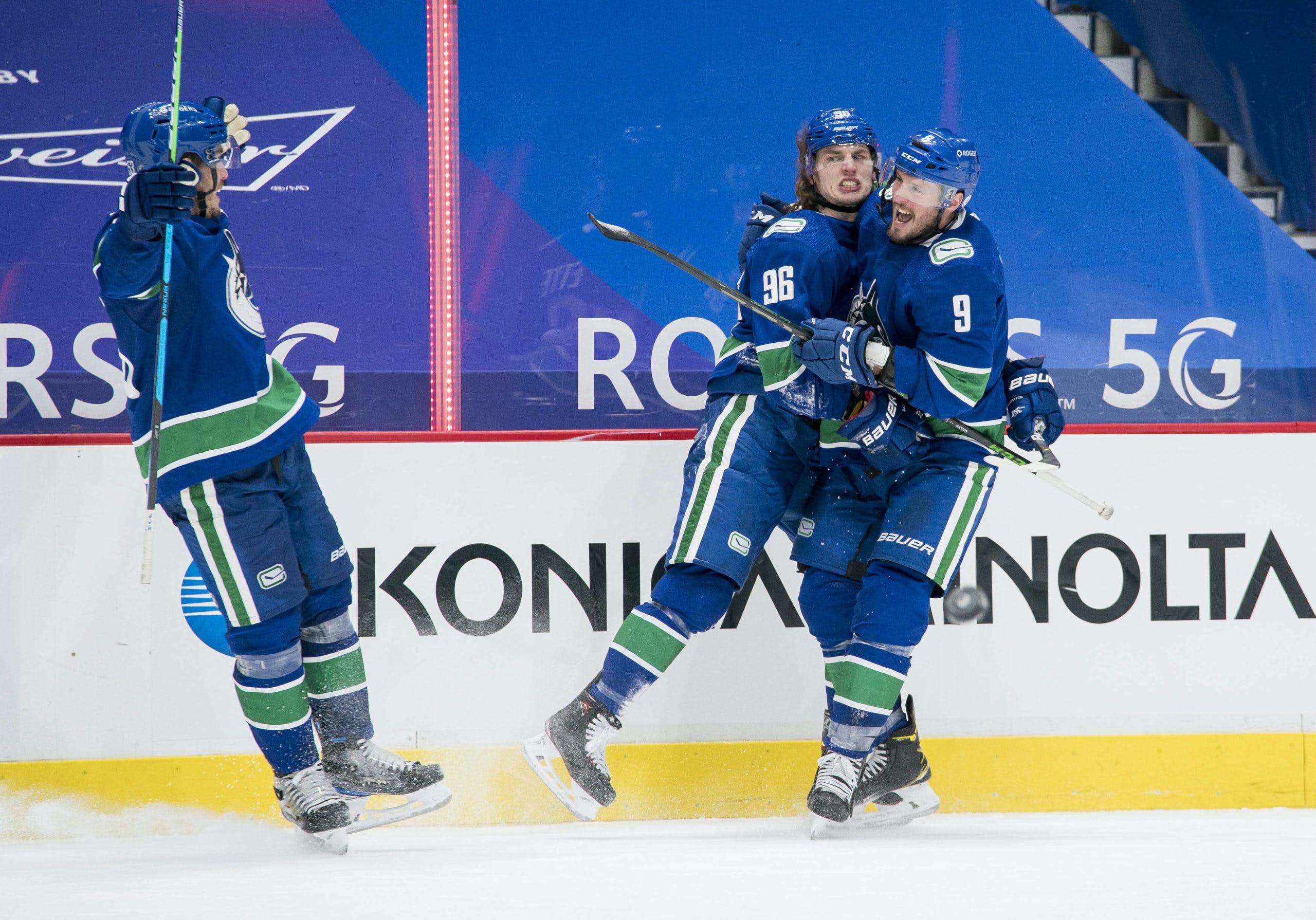 Photo credit: © Bob Frid-USA TODAY Sports
By Faber
1 year ago
Comments
The Vancouver Canucks were back in action on Monday night as they hosted their arch-rivals: Tyler Toffoli and the Montreal Canadiens.
It was a low-scoring, long game in which the Canucks eked out a 2-1 shootout win.
The Canucks were riding high after taking two games from the division-leading Toronto Maple Leafs. On Monday night, they went with the same lineup as their past two games. That included the absence of Elias Pettersson, who is still considered day-to-day.
Jake Virtanen continued to play alongside Bo Horvat and Tanner Pearson, while J.T. Miller centred a top line that was flanked by Nils Höglander and Brock Boeser. The bottom-six had a mix of new faces and penalty killers. Here’s what the lines looked like:

Advertisement
Ad
Advertisement
Ad
There was another lineup change as Sportsnet 650’s Caroline Frolic was in the public announcer’s booth alongside Al Murdoch to make goal announcements, penalty calls, and announce the starting lineup for the Canucks. It is great to see a childhood dream come true today on International Women’s Day.

Thatcher Demko was the goalie of choice for the Canucks while Carey Price stood in the blue paint opposite Demko.
The Canucks came into this game with a 1-4-0 record against the Canadiens this season and have allowed at least five goals in each of their five games.
It’s time for puck drop, let’s go!

Just three minutes into the game, Jake Virtanen jumped on the ice early and played the puck as Jayce Hawryluk was beginning to change, it resulted in a too many men penalty and the Canadiens received the first power play of the game.
Advertisement
Ad
Advertisement
Ad
Jeff Petry fired a wrist shot from the right side over Demko’s blocker side and the Canadiens led early on in the game. 1-0 Canadiens after the power play goal.
The Horvat line had some jump once again, and although Virtanen made a mistake early on, he looked engaged at 5-on-5 as his line controlled possession in the offensive zone and generated a couple of scoring chances in the first period.
It was a slow period as both teams struggled to get many even-strength scoring chances in the first half of the period.
It felt like the Canucks were controlling the pace of play as there was a lot of open ice in the neutral zone and they were able to slice passes through to continually bring pressure on Montreal. Their pressure was not resulting in many scoring chances, but they did have possession for the majority of the first 15 minutes of play.
Advertisement
Ad
Advertisement
Ad
With 3:24 remaining in the period, Alex Edler drew a tripping penalty and the Canucks went to their first power play of the game. Just 35 seconds into the Canucks’ power play, Paul Byron drove in on Demko and took a penalty for goaltender interference. That sent the Canucks on a 5-on-3 power play for 1:25.
The Canucks weren’t able to get a shot on net during the 5-on-3 and then the Canadiens killed off the remainder of the second penalty and we were back to even strength hockey with under a minute to play.
The Canucks outshot the Canadiens 10-7 and led in scoring chances by a count of 11-7. It was another good period of hockey for the Canucks where they were on the wrong side of the stat that matters: goals.
Advertisement
Ad
Advertisement
Ad

The period began with the Canadiens controlling possession for the first five minutes. They were able to take control of the shot share and had a puck roll through the crease and just wide of the net. Three weeks ago, that puck is behind Demko but it looked as though the Canucks’ luck was beginning to turn.
It took the Canucks eight minutes to register their first shot of the period and at one point the Canadiens had 13 shot attempts compared to the Canucks’ one. It’s safe to say that it wasn’t the start of the period that Travis Green wanted. Yet, at the halfway point of the second period, the Canucks were still trailing by just one goal.
Demko was having himself another good half of a game and he would need to continue to be good if the Canucks wanted to find a way to scrape their way into the win column.
Advertisement
Ad
Advertisement
Ad
There was a shakeup to the lines as Adam Gaudette moved up to play with Miller and Höglander on the first scoring line which meant Boeser went down to play with Brandon Sutter and Marc Michaelis.
With 4:25 remaining, Höglander took an interference penalty that sent the Canadiens on their second power play of the game. It was a back-breaking moment as the Canucks were just starting to give some pushback in the second period. Looking at it from a positive side, it gave the chance for them to create some momentum to close the period if they could find a way to kill off the two-minute minor.
I don’t think that taking a penalty is ever positive, but I’m trying to be more optimistic about this team.
The Canucks killed off the Hoglander penalty and with a few minutes left in the game they had given themselves some momentum. The Gaudette-Miller-Hoglander trio was skating with a ton of pace and created a couple of scoring chances late in the period.
Advertisement
Ad
Advertisement
Ad
It was an uneventful period and we went to the second intermission with the Canucks trailing by one goal.
The Canadiens outshot the Canucks 12-6 in the second period and out-chanced the Canucks 17-8.
Demko was once again very solid. His feet looked busier than usual in the crease but through 40 minutes, he had only allowed one goal on 20 shots. He was once again dialled in. The Canucks needed to solve another goalie that was dialled in with Carey Price at the other end.

The lines were in a complete mash to begin the period. Green was throwing out trio after trio, hoping that something would stick and the Canucks could get a goal out of it.
It was a quiet first half of the period. The teams traded shots through the first 10 minutes but the game felt like it was beginning to slip into quicksand. Just as the game began to hit a lull, Virtanen drew a penalty and the Canucks were back on the power play with a chance to tie things up at one.
Advertisement
Ad
Advertisement
Ad
They were unable to score and with five minutes left in the game, the Canucks still trailed 1-0.
What a fun game to write about…
The Canucks pulled their goalie with 90 seconds to go in the period. They set up for an offensive zone faceoff with 79 seconds to go in the period.
Just as I was dozing off, Adam Gaudette found space on the right wing and blasted a slap shot off the bar and in. 1-1 after the Gaudette goal.
It was Gaudette’s first goal since February 1st and it could not have come at a better time.
The Canucks had 11 shots in the third period while the Canadiens finished with nine.
We were off to overtime.

The Canadiens went with three forwards for a majority of the overtime frame. There were no whistles in the period and it went by in the blink of an eye.
Advertisement
Ad
Advertisement
Ad
It was time for the shootout.

Brock Boeser shot first for the Canucks and he was denied.
Nick Suzuki shot first for the Canadiens and he was unsuccessful.
J.T. Miller shot second for the Canucks. He came in with no pace and dragged the puck into the slot before firing a shot that was stopped by Price.
Jonathan Drouin lost control of the puck and was denied.
Bo Horvat walked in and made a move to the forehand to score the first goal of the shootout.
It was all up to Tomas Tatar, who went through his legs and was denied by Demko.
Canucks win 2-1 in a shootout.

The Canucks’ two-man advantage in the first period looked like they were afraid of scoring a goal.

Demko in the lockeroom after seeing that #Canucks 5 on 3 PP effort pic.twitter.com/zFUHRPuLM5

Thatcher Demko: So basically, this is Demko’s part of the post game now. He was solid once again, making 28 saves on 29 shots and holding a one-goal lead through the second, third and overtime periods.

It was a long one, and honestly, a boring one… But the Canucks have now put together a little winning streak and on the back of Thatcher Demko, they are making the push to try and be in the conversation for a playoff push. Three wins aren’t going to do it, but this is the right way to get back into the playoff conversation.
Advertisement
Ad
Advertisement
Ad
It seems like Demko should be starting every game until he falters and the way he is playing right now, the only way he should come out of the net is potentially during a back-to-back situation.