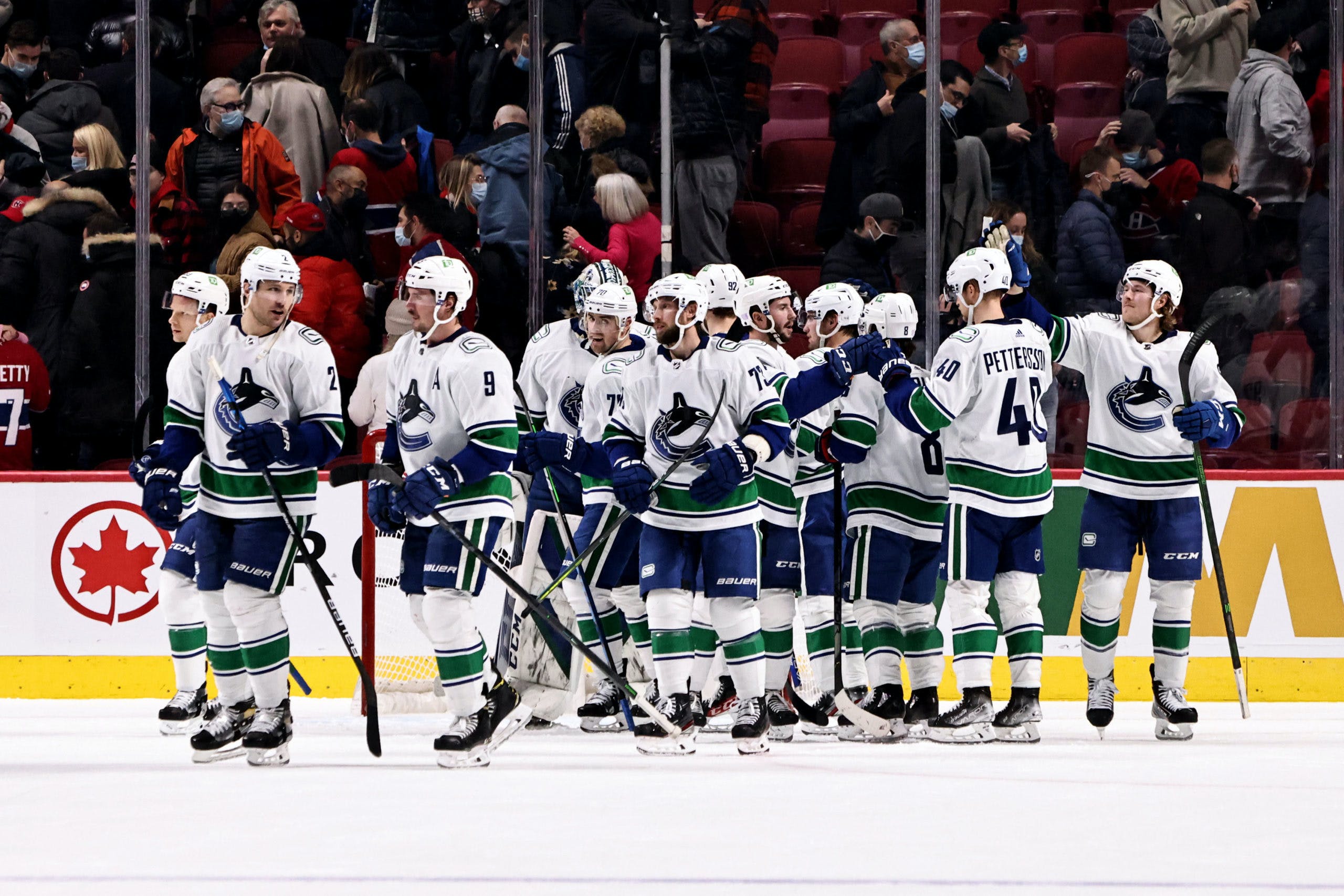 Photo credit: © Jean-Yves Ahern-USA TODAY Sports
By Faber
1 year ago
Comments
The Vancouver Canucks limped along on their road trip right into a team that just cleaned house on their management group.
Just months after making it to the Stanley Cup final, the Montreal Canadiens made massive changes to their front office as their 2021-22 season has been a massive disappointment.
Sound familiar?
Well, the disappointment part does. The Canucks still have Jim Benning at the helm with Travis Green behind the bench as the team landed in Montreal for their second game in as many nights.
Thatcher Demko was back in the crease for the Canucks while Jake Allen had the task of wearing the mask for the Canadiens.

Warmup lines for the #Canucks vs. @CanadiensMTL

It’s the same lineup for the Canucks as Travis Hamonic is nowhere to be found even with the team returning to Canada. Green told the media that Hamonic wasn’t feeling well enough to play. Monday’s game was the battle of the basement — like a pair of mice fighting for a piece of mouldy bread.
Advertisement
Ad
Advertisement
Ad
The Montreal Canadiens are one of three teams in the NHL with a worse winning percentage than the Canucks.
It was finally time to get a win, right?
Let’s go!

It was a good start for the Canucks as they had early control of possession and pressured Allen with multiple shots in the opening minutes.
There was a lot of space available for the Canucks as the Canadiens looked surprised by the Canucks’ jump in the first half of the period. The Canucks had 11 shots in the first seven minutes of the game and their pressure on the offensive zone resulted in an early power play.
Elias Pettersson was brought down in the offensive zone and that put a Canadien in the box and put the Canucks on the man-advantage.
Advertisement
Ad
Advertisement
Ad
The Canucks went to work on the power play and we saw a glimpse of Pettersson’s old one-timer. He ripped a slap shot past Allen and it had to feel good for the young forward because it looked great. 1-0 Canucks.

The Canadiens began to pour it on after the goal. They had scoring chances and a couple of scrambles around Demko’s crease. The Canadiens battled back in the shot department. They were taking over the game as the second half of the period went on.
After a long stretch of pressure, Jonathan Drouin found Ryan Poehling in tight for a tip-in that beat Demko. 1-1 after the Poehling goal.
That brought the game into the first intermission with a tie game.

The Canucks came out with a lot of jump and eventually got a goal for their efforts. After the goal, the effort went down the drain. The Canadians held the Canucks without a shot for the final 12 minutes of the period. Both teams had a stretch where they controlled the game and both teams were rewarded with a goal for their effort. It was a choppy period that left the door open for either squad to take control as we went to the second period.
Advertisement
Ad
Advertisement
Ad

The period began with some exciting back-and-forth action that saw the Canucks control most of the possession. There was some good play from Pettersson and Nils Höglander that generated scoring chances.
Tanner Pearson’s pressure on a forecheck created a turnover that landed on Bo Horvat’s stick and he fired the puck in front right to Conor Garland. Garland one touched the puck up and over Allen to give the Canucks another lead. 2-1 Canucks.

Horvat plucks the puck to set Garland up! 😏👉

The Canucks had a very strong opening half of the period. Much of the time was spent in the Canadiens’ zone and they were rewarded with a lead at the halfway point.
I’m fumigation fashion to the first period, the Canadiens took over the pressure at the halfway point. Waves of red jerseys came towards Demko for a handful of minutes.
Advertisement
Ad
Advertisement
Ad
Demko made a big gloves save on a cross-ice one-timer off the stick of Drouin with 2:46 remaining in the period.
That was all she wrote for the second period. The Canucks took a one-goal lead into the intermission.

It was a full 20 minutes of five-on-five for the period. The Canucks controlled almost all of the play in the period aside from a stretch around the halfway point of the period where the Canadiens had some scoring chances on Demko.
It was a great period for the Canucks. It looked a lot like the first period but instead of the momentum swinging in the Canadiens’ direction at the halfway point, the Canucks were able to battle back and show well in the final seven or eight minutes of the period. The Canucks finished the period with 20 shots on net and 12 scoring chances in the middle frame.
Advertisement
Ad
Advertisement
Ad

It would have helped if the Canucks were able to stay out of the box in the third period. That wasn’t the case early on as Höglander took a high-sticking penalty just 38 seconds into the stanza.
Motte and Pearson had some good clears and the Canucks were able to kill off the penalty with ease.
Pettersson began a rush through the neutral zone and was tripped up as he approached the opposing blue line. That resulted in the Canucks heading to the power play for the second time of the game with 14:37 remaining in the period.
The best chance came on a Quinn Hughes one-timer with Alex Chiasson in front of the net but the Canadiens were able to kill off the penalty and keep it as a one-goal game.
Advertisement
Ad
Advertisement
Ad
With 11:40 remaining, Kyle Burroughs took a bad interference penalty that sent the Canadiens to the power play.
The Canucks looked tired, flat-footed and struggled to clear the puck while shorthanded. Luckily for them, Demko made a couple of big saves and Luke Schenn cleared the puck at the end of the penalty and the Canucks killed off the power play.
The pace cranked up for the final five minutes as the Canadiens pushed hard for the tie. Demko made a massive save as he stacked the pads to maintain the Canucks’ one-goal lead with just under three minutes remaining.

Thanks for coming, Chiarot – Demko, probably. 🤩

Thatcher Demko once again finds himself as the Canucks’ top performer. He made 33 saves on 34 shots, none of which were better than his pad stack late in the third period to maintain the one-goal lead. The Canadiens had 27 scoring chances and had an expected goals number of 2.21. Demko was excellent for the Canucks and helped keep momentum on the Canucks’ side throughout the game.

In a game that saw 52 minutes of five-on-five, it was a back and forth affair between two teams who sit at the bottom of the NHL standings. The Canucks were able to control the pace of play throughout the game. It felt like the Canucks had control of the game aside from the final 12 minutes of the second period.
Advertisement
Ad
Advertisement
Ad
To cap off the night, we got to see a smiling, happy Elias Pettersson in the post-game media availability.
“I feel everything is confidence,” said Pettersson. “It’s been a slow start for me personally. I have been having a tendency to overthink and have been kind of going away from hard work.”
It was a much better night for Pettersson. It all started with a vintage Pettersson one-timer goal in the first period and he rode that confidence throughout the game. He was more engaged in the neutral zone and skated with pace on the forecheck.
The Canucks will look to build on this slump-buster as they head into Ottawa to face the worst team in the NHL.
Puck drop is at 4:30 PST on Wednesday.