Advertisement
Ad
CanucksArmy post game: Some how, some way, the Canucks beat the Leafs with a storybook finish 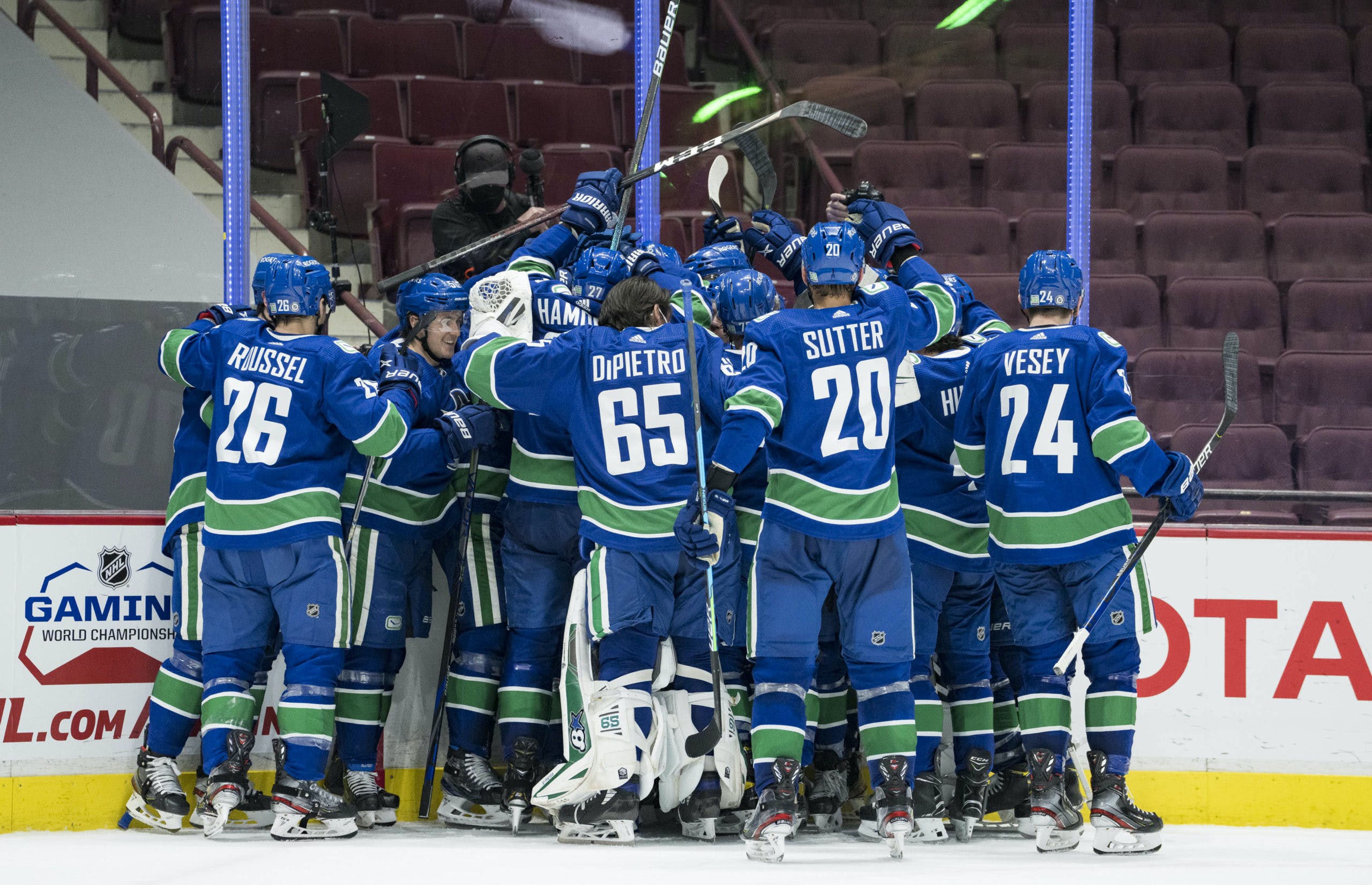 Photo credit: © Bob Frid-USA TODAY Sports
By David Quadrelli
1 year ago
Comments
It felt weird to walk into Rogers Arena this afternoon.
The lights were all the same. The goal horn test happened at the same time as it always does. PA announcer Al Murdoch’s familiar voice was just as enthusiastic as it always has been. The musical medley that plays while the Canucks warm up was the same as it has been all season.
But for reasons that can likely be chalked up to simply knowing what the Canucks’ players, staff, and family members have gone through over the past two weeks, it felt strange walking into Rogers Arena this afternoon.
That being said, there was a heartwarming tribute to Canucks trainer Pat O’Neill, who joined the 3,000 games club. Three thousand! The tribute had messages from former Canuck players including Pavel Bure, Trevor Linden, Henrik and Daniel Sedin, Markus Naslund, and more.
Advertisement
Ad
Advertisement
Ad
Congrats to Pat on 3,000!

Lines for the #Canucks against @MapleLeafs:

The Canucks managed to get the first shot on goal of the game, so that was a nice little moral victory right off the hop.
In all seriousness, the Canucks looked like the better team through the first three or four minutes of play. Head coach Travis Green talked earlier about how his team would need to make short, crisp passes, and handle the puck with care in order to find success against Toronto.
And they were doing just that, at least early on.
Then they didn’t.
An untimely turnover took place after a hot pass from Jimmy Vesey in the neutral zone failed to connect with Brock Boeser. This allowed William Nylander to walk in on Holtby’s right and snipe far side. 1-0 Leafs with 56 minutes and 15 seconds to go.
Advertisement
Ad
Advertisement
Ad
The Leafs continued to pour on the pressure, and nearly struck again just minutes after the game’s opening tally. Some more fortuitous bounces and better puck management allowed the Canucks to come out unscathed from a flurry of Leafs’ chances.
Then Alex Edler took a slashing penalty.
Antoine Roussel found himself with a bit of an offensive break to begin the penalty kill, and certainly did his part in making sure the Leafs couldn’t get set up.
Jason Spezza had the best chance of the power play, as the Leafs successfully found him for the back door tap in, just how Manny Malhotra drew it up.
Somehow, the puck stayed out:

Advertisement
Ad
Advertisement
Ad
The hockey gods kind of owed the Canucks one, didn’t they?
After the Canucks killed off the penalty, it was surprisingly a lot more back and forth between the two teams.
If the Canucks didn’t register another shot on goal for the rest of the game, no one would have given them flack for it. But credit where it’s due, they bent but refused to break through the first 20 minutes of this one.

Bo Horvat had a good opportunity early on in the second but put it high and wide over the Leafs’ net.
Looking like David Ayres in the prime of his career, Braden Holtby looked stellar in this game. The Leafs were generating a ton of offensive chances early in the second and really seemed like they wanted to take over the game after a mediocre first period.
Advertisement
Ad
Advertisement
Ad
Holtby — with a little help from Edler, who swatted away a puck that was trickling to the goal line — was up to the challenge when the Leafs pressed early.
Bend but don’t break.
J.T. Miller took a penalty with 12 minutes to go in the second frame, and was NOT a fan of the call. The broadcast cut to a TV timeout, but Miller had a lengthy discussion with both officials outside of the box for the entirety of the 90-second stoppage.
After the penalty, the Leafs continued to press with offensive zone time with some extremely tired Canuck bodies stranded on the ice.
Brandon Sutter failed to clear the zone not once but twice, and the Canucks were only able to push the Leafs to the neutral zone. On a bit of a sloppy change where not all of the Canucks’ tired personnel could vacate the ice, Alex Edler stuck out his leg and took out Zach Hyman’s knee in what was an incredibly dangerous play:
Advertisement
Ad
Advertisement
Ad

The bench was irate after the hit. Edler given a five-minute major #LeafsForever pic.twitter.com/sNXja2bS3B

The Leafs bench was irate, and rightfully so. That’s a dangerous play, no matter how tired you are.
During the TV timeout, the officials threw on the headsets and decided to hand out a 5-minute major and a game misconduct to Edler for the infraction.
On the ensuing five-minute power play, Braden Holtby came up big.
Like, really big:

WHAT A SAVE BY HOLTBY! #Canucks
🎥 @Sportsnet pic.twitter.com/gEa2wU0np5

Then in the dying moments of the five-minute man-advantage, the Canucks got a little bit ahead of themselves at the other end of the ice and left Holtby out to dry:
Advertisement
Ad
Advertisement
Ad

The broadcast didn’t pick it up, but Holtby was hollering at his teammates to get back before this opportunity even developed. 2-0 Leafs.
Holtby was extremely vocal in this one, especially when the pairing of Jalen Chatfield and Guillaume Brisebois was on the ice.
Shortly after time expired on the five-minute major, Bo Horvat found the back of the net after a nice feed from Nils Höglander. 2-1 Leafs.
Just like that, the Canucks were down by just a single goal, and really didn’t look as bad as most assumed they would through 40 minutes of play.

Look, nobody would have batted an eye if the Cnaucks came out and got absolutely blown out by the Leafs tonight. And if you take Edler out of the equation? Forget about it.
Advertisement
Ad
Advertisement
Ad
The Canucks should have had no business hanging around in this game.
But they did.
They looked like a team ready to give it their all. Perhaps it was due to the strong play of Holtby, but the Canucks truly did look like they had some real energy in this one — certainly far more energy than anyone expected of them.
After some back and forth action, Justin Holl took a cross-checking penalty, sending the Canucks to their first power play of the night.
Still without Elias Pettersson, the Canucks relied heavily on feeding the puck to Miller on the wall, and managed to generate some quality chances as a result.
Unfortunately for them, they couldn’t manage to put the puck past Jack Campbell.
At the other end, Braden Holtby continued to dazzle in what can only be considered his greatest performance as a Canuck.
Advertisement
Ad
Advertisement
Ad
Michael DiPietro — who still hasn’t played a game in over 365 days by the way — was Holtby’s biggest fan on multiple occasions. This save from Holtby caused DiPietro to rise to his feet and give a round of applause from the bench for the veteran netminder:

“It just kind of popped up, and luckily I was able to keep my eyes on it and keep it out,” said Holtby. “Those ones are fun to make sometimes.”
“He does that sometimes in practice, but to see him do it in a game was kind of hilarious,” said Bo Horvat of the save. “We’re always bugging him to do it… I think it gave us some energy for sure.”
Advertisement
Ad
Advertisement
Ad
That save truly was the biggest momentum shift of the game for the Canucks.
As he so often does, Nils Höglander went hard to the net and was rewarded for it, putting the puck past Campbell. 2-2 with 7:40 remaining.
“I tried to show my blade and Chatty made a good pass,” said Höglander.

Nils Hoglander ties it up at 2 for the Canucks mid-way through the third period!#Canucks pic.twitter.com/Z9A1MGOHjm

These were two teams who wanted to win very badly. It was a better hockey game than anybody could have imagined.
Jayce Hawryluk nearly broke the 2-2 tie with four minutes remaining but hit the crossbar. He hung his head in frustration — and likely exhaustion — when he got back to the Canucks’ bench.
Advertisement
Ad
Advertisement
Ad
Now missing Alex Edler, the Canucks relied heavily on the rest of their already depleted defence corps. Tyler Myers logged over 30 minutes of total ice time, and Quinn Hughes played 12 minutes of the third period.
With 19 seconds remaining, the Leafs had their best chance of the game to put the Canucks to bed once and for all, but the hockey gods once again had other ideas:

Somehow, this one would need overtime.

The Canucks sent out Brock Boeser with J.T. Miller and Quinn Hughes, and the trio controlled play every second they were on the ice.
The Leafs iced the puck, but thanks to a smart decision by Miller to yell at Holtby to come out and play the puck, the Canucks managed to keep possession of the puck while getting fresh bodies on the ice.
Advertisement
Ad
Advertisement
Ad
One of those fresh bodies was Bo Horvat, who managed to find some space streaking down the ice. He made no mistake and capped off the storybook ending for his team:

Toronto Maple Leafs (TOR) have been placed on waivers

Folks, this is an all-timer from an actual media member:

For Canucks organization, congrats. What an impressive effort. For those VAN fans gloating and talking smack, your team only trails Leafs by 24 points now. Congrats.

WHAT. A. GAME.
Just look at the excitement on these #Canucks faces. 💙💚
🎥 @Sportsnet pic.twitter.com/GYooLmFvhc

“We really wanted to win, and the guys are really excited,” said Quinn Hughes post game. “We played hard, nothing came easy, and guys still aren’t 100%… It almost felt like we won a playoff game. We know we’ve got a good team. The next month will be gruelling but we’ve got to just take it one step at a time.”
The Canucks will indeed need to take it one game at a time, and will hope to have Nate Schmidt back in time for Tuesday night’s tilt.
This was a gutsy win by the Canucks.
Advertisement
Ad
Advertisement
Ad
For Horvat, knowing that people weren’t expecting much from his club only “fuels the fire.”
“I couldn’t be prouder of the guys in that room,” said the Canucks’ captain. “This is a group that wants to win and we showed it again tonight.”
The Canucks’ performance tonight was incredibly admirable, and anybody who says otherwise is likely a Leafs fan.
The Canucks will be back in action on Tuesday night, and will once again face the Toronto Maple Leafs at home.