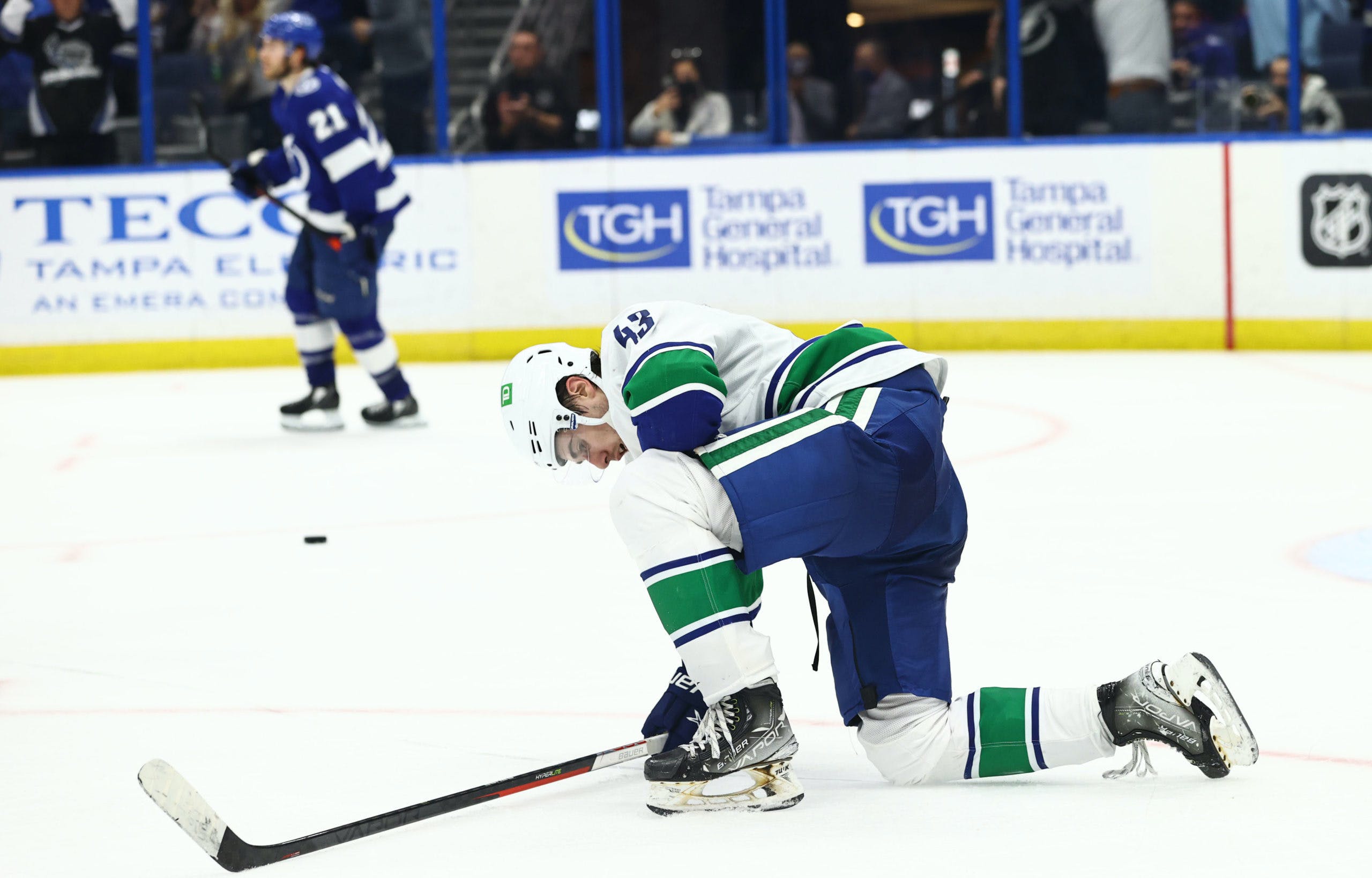 Photo credit: © Kim Klement-USA TODAY Sports
By Faber
1 year ago
Comments
The Canucks continued on their difficult road trip with a matchup against the two-time defending Stanley Cup champion Tampa Bay Lightning.
After a tough 5-2 loss to the Florida Panthers, the Canucks looked to get back into the win column on Thursday night.
It was a decent showing for the Canucks in the first game of the road trip even though the scoreboard would say otherwise. They were once again tested in a tough matchup that would show where they rank next to the league’s top team.
It was the exact same group of skaters for the Canucks but we did see a shift down the middle.

Elias Pettersson moved onto Bo Horvat’s wing and skated with Conor Garland on a second line. Jason Dickinson went back to centre as he was surrounded by the youngsters in Nils Höglander and Vasily Podkolzin.
Thatcher Demko was named an all-star just minutes before the game and he got the crease for the Canucks as he matched up with fellow all-star Andrei Vasilevskiy, who started for the Lightning.
Advertisement
Ad
Advertisement
Ad
It’s time for the Canucks to get back into the swing of things and it’s time for puck drop.
Let’s go!

The Lightning came out firing early in the game and Steven Stamkos had an early partial breakaway in the opening two minutes but Quinn Hughes caught up to him and gave some pressure as Stamkos fired high over the net.
Vasily Podkolzin took a hooking penalty in the offensive zone just 2:37 into the game and the Lightning went to work with their strong power play unit.
It didn’t take long for the power play to strike and for Stamkos to make up for his miss earlier in the game. Victor Herman passed it across to Stamkos and he wired a one-timer past Demko to give the Lightning a lead just three minutes into the game. 1-0 Lightning.
Advertisement
Ad
Advertisement
Ad
The Canucks’ fourth line had a strong start to the game and they were rewarded when Matthew Highmore ripped a shot into the top corner as Juho Lammikko screened Vasilevskiy. 1-1 after Highmore’s first of the year.

Highmore beats Vasilevskiy with his first goal of the season! 👏

The Canucks took control of the period after the Stamkos goal and were consistent with having dangerous shots for the ensuing 10 minutes after the Lightning goal. They had scoring chances from Conor Garland and a pair of good opportunities for Oliver Ekman-Larsson on some screened shots.
The Canucks’ fourth line got in trouble late in the period as the Lightning were able to do what the Canucks weren’t and capitalized on their chances. Anthony Cirelli scored a goal with 21 seconds remaining and gave the lightning another lead. 2-1 Lightning.
There was a hit from Garland with just a few seconds in the period. It led to some extra punches thrown after the whistle and set the Canucks up for a power play to end the period and carry over for 115 seconds in the second period.
Advertisement
Ad
Advertisement
Ad

It once again felt like the Canucks were the better team in the period. Vasilevskiy was good when he had to be and outplayed his fellow all-star goalie in the first 20 minutes. Demko saw 8 shots in the period compared to Vasilevskiy seeing 12. The Canucks had more chances but similar to the Panthers on Tuesday night, the Lightning were better at capitalizing.
Another takeaway was that Pettersson on the wing seemed to work great in the first period. The line of Pettersson, Horvat and Garland was excellent in the opening period and spent nearly the entirety of their ice time in the Lightning’s zone.

A Pettersson-Horvat-Garland line sounded like it would be good, and through 20 minutes… it is!

There were some positives to build off of, but in the end, the Canucks trailed by one goal heading into the second period.

The Canucks were able to gain the zone but couldn’t generate any scoring chances on their power play attempt.
Advertisement
Ad
Advertisement
Ad
Demko was tested a few times early in the period including one from Nikita Kucherov that just about resulted in a goal as he almost picked the top corner.
The next handful of minutes didn’t see much action as it was filled with whistles all the way up to the halfway point of the period.
Horvat had a grade-A scoring chance just past the halfway point as Pettersson sent a pass out to Horvat who was wide open in the slot. He fired a shot that caught the blocker side of Vasilevskiy and bounced into the corner.
Tyler Myers took a high-sticking penalty with 6:46 remaining after the Canucks had a long offensive possession that ended with Myers beating Vasilevskiy but not the post. The Canucks killed off the penalty and immediately after, Pettersson had a partial breakaway where he ripped a backhand attempt over the net.
Advertisement
Ad
Advertisement
Ad
Brayden Point took a penalty with just over four minutes remaining and gave the Canucks their second power play opportunity of the game. It wasn’t a good power play for the Canucks, who struggled to get much offence going and didn’t get a shot on goal in the two minutes of man-advantage time.
Podkolzin was taken into the corner in a dangerous position and Erik Cernak went to the box with 2.7 seconds remaining in the period. The Canucks’ power play would carry over into the third period and Podkolzin skated off the ice fine after staying down for an extra second or two.

The power play was unable to set up and the Lightning killed off the penalty without a shot against.
Horvat took a holding call with 16:09 remaining in the period to give the Lightning another chance on the power play. The Canucks killed off the penalty and had a three-on-one right after as Dickinson fired a shot into Vasilevskiy.
After the Canucks had some chances in the Lightning’s zone, the Lightning came down on a two-man breakaway and Boris Katchouk was the final man to touch the puck and redirect it past Demko. 3-1 Lightning.
The Lightning took a too many men on the ice penalty and the Canucks were given another timely opportunity to get back in this game.
The power play came out firing and had their best opportunities with the man-advantage. They were still unable to get a goal on the power play as they went to 0-for-4 on the night.
Advertisement
Ad
Advertisement
Ad
Point came in on a breakaway and was stopped by Demko with quite the uncalled Myers hook to help. Then the Canucks came down with their fourth line and Tyler Motte scored the prettiest goal of his career as he went through his legs down on the end line and roofed the puck off of Vasilevskiy and into the back of the net. 3-2 Lightning after Motte’s highlight-reel goal.

The Canucks pulled their goalie with over two minutes remaining.
Brayden Point was able to carry the puck up ice and danced with Quinn Hughes a bit before firing a shot past him and into the open net. 4-2 Lightning.
That was all she wrote as the Canucks fell to the Lightning by a score of four to two.

The fourth line as a whole was strong on Thursday night. Both of the Canucks’ goals came from the fourth line at five-on-five. Matthew Highmore scored the first Canucks’ goal of the game and spoke about his line contributing to the team.
Advertisement
Ad
Advertisement
Ad
“I think we’re just reading and reacting off each other,” said Highmore. “[We’re just] trying to play well defensively and working hard, trying to stay above guys in the offensive zone trying to turn pucks over. I just think it’s been a simple game but we’re working hard, really just reading and reacting.”

It felt like the Canucks were the better team in the game, and at five-on-five, they were. The Canucks controlled 60% of the scoring chances at five-on-five and outshot the two-time defending Stanley Cup champions by a count of 25-17 at five-on-five. The problems came on the special teams as the Canucks were unable to score on any of their four power play opportunities on the night.
Quinn Hughes spoke on the power play, which he believed was pretty good at moving the puck, but also added that ultimately, not scoring was the difference in the game.
Advertisement
Ad
Advertisement
Ad
“I don’t think there’s anything too specific,” said Hughes. “I thought we had chances. I felt like I had a couple of shots that could have went in. So it is what it is. I think we’re going to have chances, we just need to stick with it, and keep it simple. It obviously sucks that we didn’t score and went 0-for-4 today. It was the difference in the game.”
Head coach Bruce Boudreau also spoke on the power play and took the blame for the struggle of the units.
“That’s my fault for putting the same guys back out there all the time,” said Boudreau. “But you know, I think that’s got to get better. I mean, I think we’re 0-for-six or 0-for-seven in the last couple of games and we’re a team that needs success on the power play and [tonight] we didn’t get it. I’ve always been in favour of a shooting power play and looking at this team, we don’t have the guy with the bomb from the point but at the same time, if you shoot and you get inside on the powerplay, you’re going to score goals. We’ve got to get pucks through, I think sometimes we’re trying to be too cute, and that has to change.”
Advertisement
Ad
Advertisement
Ad
Boudreau is bang-on with what let the Canucks down in that game. The Lightning won the special teams battle but the Canucks won the even-strength battle. It almost felt like the Canucks’ power plays were momentum killers at certain points in the game and that cannot happen. The Canucks only had one shot on net in eight minutes of power play time. That is simply not good enough. The Canucks had eight shot attempts but they either missed the net or were blocked. The power play needs to be worked on before the weekend games and Boudreau will have a Friday full of practice to prepare his special teams units for the early Saturday game.
The Canucks are in action on Saturday at 10 am and Sunday at 10 am. Get your coffee ready, we will see you on the weekend!
Advertisement
Ad
Advertisement
Ad