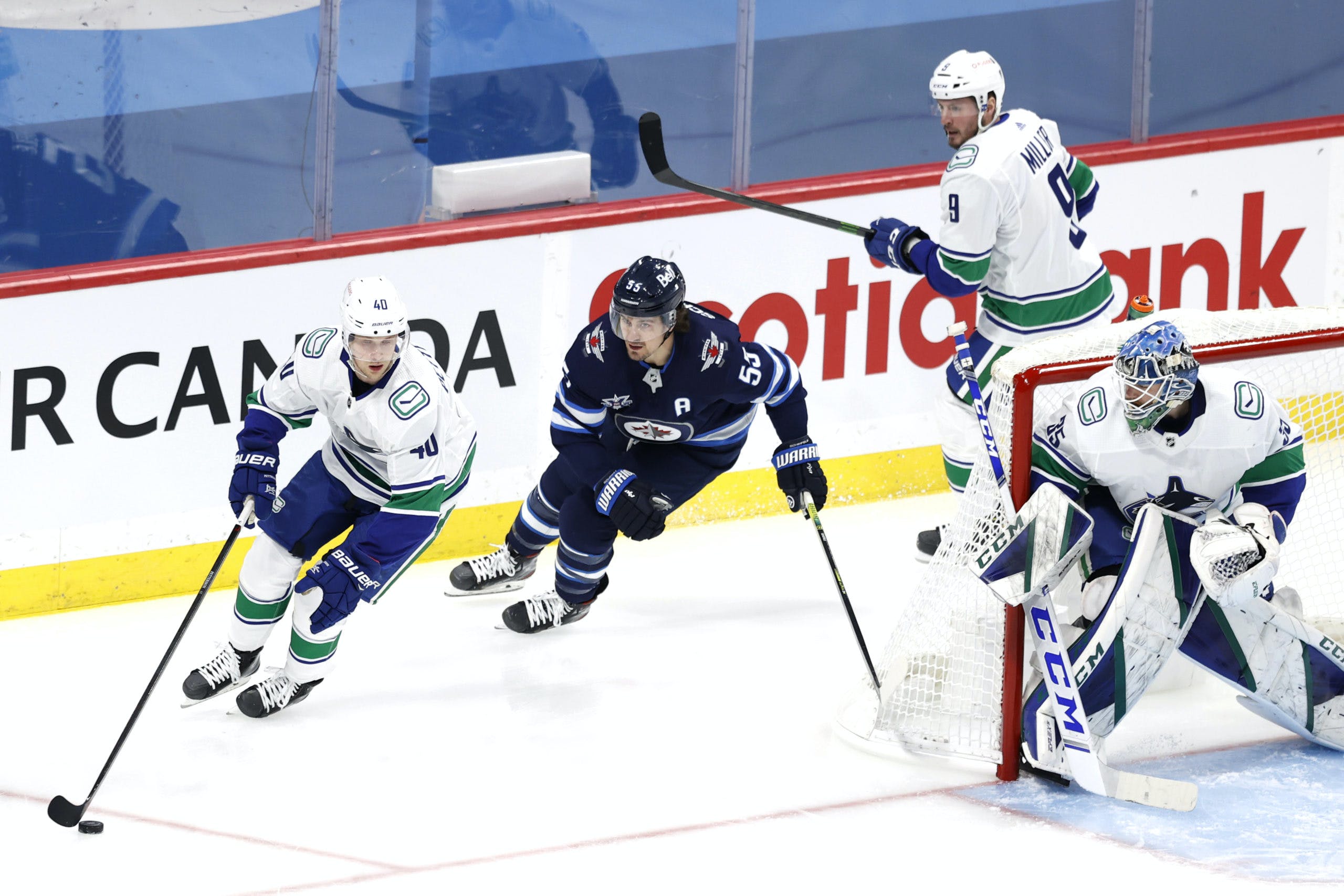 Photo credit: © James Carey Lauder-USA TODAY Sports
By Shu Lei Wu
1 year ago
Comments
The Canucks came into Tuesday evening looking to build on their win against the Winnipeg Jets the previous night and finish the road trip with a perfect record. The Jets, however, had yet to lose in regulation in two consecutive games this season, and you can bet they were extra motivated after having been shut out the night before. This time, the Jets made up for their lack of offence the previous night by defeating the Canucks 5-2 to split the mini-series 1-1.

Warmup lines for the #Canucks vs. @NHLJets:

Given the Canucks’ performance Monday night, head coach Travis Green saw no need to make any changes to the lineup other than a swap in goal from Thatcher Demko to Braden Holtby.
Advertisement
Ad
Advertisement
Ad
The Jets, as expected, made a few notable changes coming off of a 4-0 shutout loss. Paul Stastny moved up to center the first line in between Blake Wheeler and Mark Scheifele, while Tucker Poolman drew into the lineup in place of Sami Niku on the back end. Laurent Brossoit — also know as the Canucks’ kryptonite — got the nod in goal. Game on!

The Canucks opened the game with an early chance through Tanner Pearson off a feed from Bo Horvat, but the shot was stymied by a sharp Brossoit sliding to his right.

The Jets broke the early deadlock soon after courtesy of Mason Appleton, who finished a rebound opportunity after Adam Lowry tipped the puck on the net during a 3-on-2 rush.
Advertisement
Ad
Advertisement
Ad

Jets open the scoring after Holtby makes the initial save off Lowry but Appleton drives the net and is able to chip the puck in on the rebound. #Canucks pic.twitter.com/z2E4xMo2Eh

By the time Lowry redirected the puck on the net, the chance had already turned into a 3-on-3 situation, but J.T. Miller inexplicably decided to stop moving his feet and let Appleton beat him to the rebound.
Next, vintage Alex Edler caught Scheifele with his head down and levelled him with a huge hit.

The Jets’ lead wasn’t to last, however, as the Canucks finally solved Brossoit through a sweet combination between Boeser and Pettersson before the latter ripped it high and past Brossoit for the equalizer.
Advertisement
Ad
Advertisement
Ad

A lot has been made of Pettersson’s uncanny ability to draw iron this season, so it was nice to see one of the rare instances where his shot hits the post and actually goes in. Apparently, when it rains puck luck, it pours!
The Canucks got a power play opportunity about halfway through the period through a Pierre-Luc Dubios penalty but weren’t able to cash in before Tyler Myers nullified the advantage with an interference penalty.
After killing off the penalty, the Canucks seemed well on their way to closing out the period with a string of consecutive strong shifts in the offensive zone, but all that hard work was unfoiled after a Brandon Sutter turnover in the slot led to Matthieu Perreault putting a rolling puck past Holtby on the backhand with three seconds left in the period to give the Jets a 2-1 lead. One might be led to believe that Sutter took the assisting memo a bit too far…
Advertisement
Ad
Advertisement
Ad

3 seconds left in the 1st period and Mathieu Perreault beats Holtby off the turnover by Sutter and the Jets take a 2-1 lead into the intermission #Canucks pic.twitter.com/htsW1Xs4YQ

The Canucks opened the second period by giving up a grade-A chance for Wheeler in the slot, but soon answered back with their own through Pettersson, who was sprung on a partial breakaway by Nate Schmidt. Soon after, Boeser had a clean look off of a cross-ice feed by Miller that rang off the post on Brossoit’s stick side.

Early 2nd period and the #Canucks get some good chances as Brossoit just fights off Pettersson's chance and right after Boeser wires one off the post pic.twitter.com/fxFaL6sbDR

Advertisement
Ad
Advertisement
Ad
The Canucks continued to give up odd-man rushes, however, and gave up a penalty after Jordie Benn tripped up Appleton. The Jets made the Canucks pay on the power play through Kyle Connor, who snuck a shot through Holtby’s five-hole to give the Jets a 3-1 lead. The Jets’ power play is dangerous, but this was a weak goal to give up and it’s safe to assume Holtby would like to have that one back.

Jets work it around on the PP and Kyle Connor sneaks it under Holtby to make it a 3-1 lead over the #Canucks in the 2nd pic.twitter.com/cAthZ43DcA

#Canucks on the PP and JT Miller beats Brossoit with a rocket one-timer with under 5 seconds left in the middle frame pic.twitter.com/NvtwA0VKTb

Green opened the third period with his line mixer which saw Jake Virtanen skate alongside Miller and Pettersson, among other permutations of the forward group. Pettersson did, however, find an opportunity to put Josh Morrissey’s glove into the back of the net.

Despite Green’s best efforts to switch up the lines, the Jets were able to extend their lead to 4-2 following a goalmouth scramble at the Canucks’ net, where Stastny was able to capitalize on a disorganized Canucks defence that left him wide open.

Holtby stops Stastny in the slot once but on the second chance, Stastny scores and the Jets go up 4-2 on the #Canucks pic.twitter.com/SHnuqOH26O

Advertisement
Ad
Advertisement
Ad
Now chasing a 2 goal deficit, the Canucks pulled Holtby with about 4 minutes left in the third, but Blake Wheeler put on the finishing touches into the empty net for a 5-2 Jets lead.

Brock Boeser
Brock Boeser has been one of the Canucks’ most consistent forwards this season and continued that into Tuesday night’s game against the Jets. He set up both of the Canucks’ goals and won a number of puck battles in the offensive zone. He has looked like a quicker, stronger version of himself all season and has been one of the few bright spots on the team.

Even when he scores, Elias Pettersson hits the post. And the cross bar. #Canucks

Can’t believe Pettersson still remembers how to shoot after spending his entire offseason on Instagram and Twitch. Weird

what is canucks hockey if not pain persevering

Interesting Stat of the Day

Not so much interesting as it is discouraging, but the Canucks are now 0-13-0 when giving up the first goal of the game. Since that’s a bit of a depressing stat, here’s a bonus one from Satiar Shah:

Taylor Hall has scored 17 goals since the start of last season.

Tuesday night’s loss was a tough one to swallow for a Canucks team that was trying to get on a roll following a promising 4-0 win the previous night.
Advertisement
Ad
Advertisement
Ad
However, this game should solidify — if it wasn’t already obvious before — that Demko should be the starter moving forward. Granted, the Canucks didn’t play well enough to win the game even with average goaltending, but lacklustre goaltending makes games like these almost impossible to win and makes Jacob Markstrom’s departure all the more painful, even if it was probably the right decision. According to Natural Stat Trick, the Canucks posted an xG of 1.52 compared to the Jets’ 2.73 xG, so while there is merit to Holtby’s detractors, the team as a whole was outplayed by the Jets as well.

The Canucks will look to rebound on Thursday night when they return home to face the Toronto Maple Leafs at 7 pm PT for the first of a two-game mini series as they kick off a five-game homestand.
Advertisement
Ad
Advertisement
Ad