Advertisement
Ad
CanucksArmy post game: Nils Höglander’s on another level but the Canucks fall 3-2 in a shootout against the Oilers 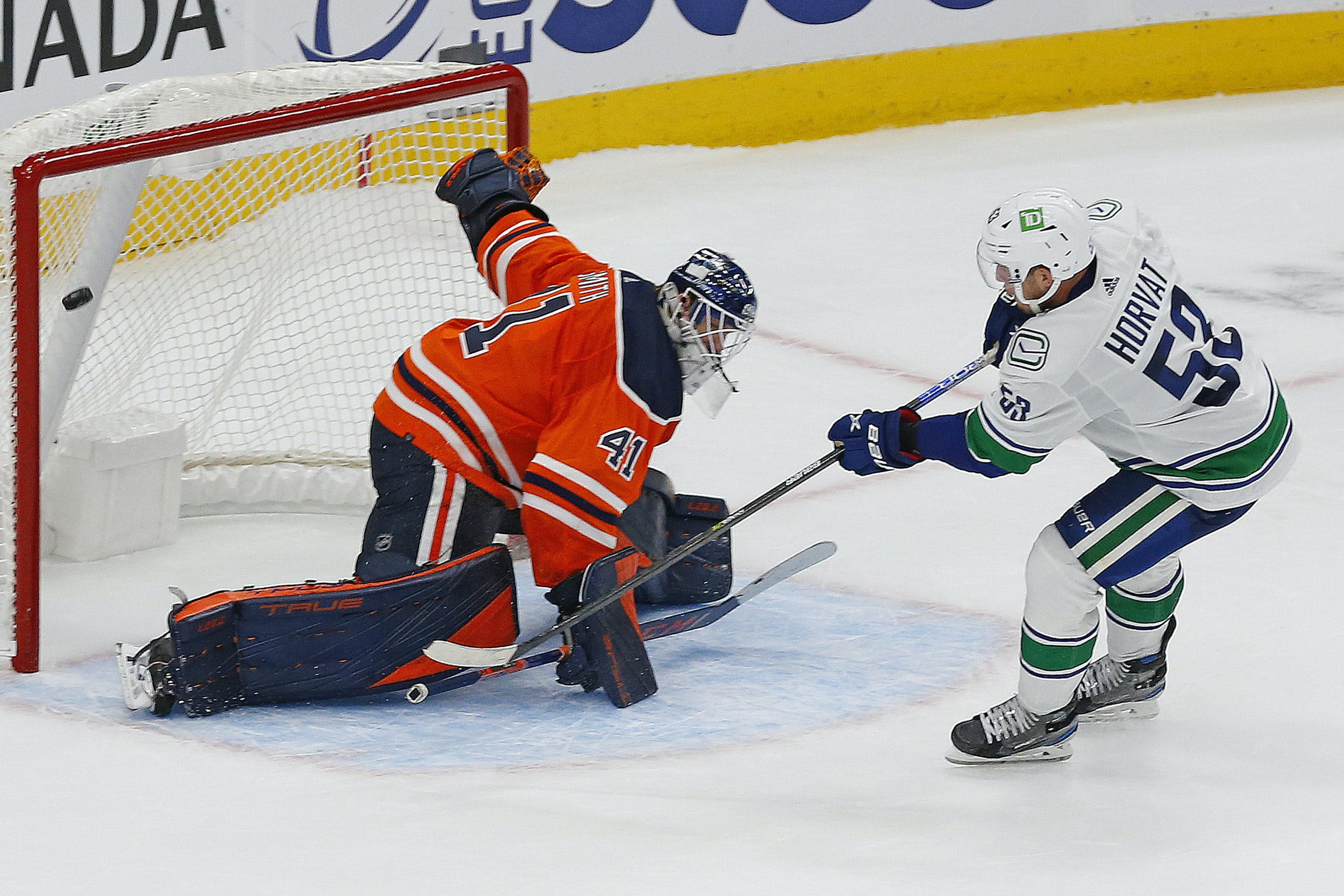 Photo credit: © Perry Nelson-USA TODAY Sports
By Faber
1 year ago
Comments
Ladies and gentlemen, welcome to the 2021-22 NHL season. A season where the Canucks are still good at pushing late goals across the line but ultimately their first 50 minutes were not enough to score two points and they lose to the Oilers 3-2 in a shootout.
With a new year, comes a new team and with a new team comes high expectations.
The Vancouver Canucks made some recent changes to their lineup as they shipped out Olli Juolevi for a pair of depth players from the Florida Panthers.
One of those players is Juho Lammikko, who jumped right into the Canucks’ lineup as the fourth line centre. Another surprise was the third pairing. Travis Green decided to go with Jack Rathbone and Kyle Burroughs instead of veterans Brad Hunt and Luke Schenn.
Advertisement
Ad
Advertisement
Ad

Lines for the #Canucks in warmup vs. @EdmontonOilers

It was a great spot for Alex Chiasson to start the season as he skated alongside Elias Pettersson and J.T. Miller in Brock Boeser’s absence.
Though Nils Höglander looked amazing when lined up with Bo Horvat and Tanner Pearson, Travis Green went with Conor Garland with that duo instead of Höglander.
Vasily Podkolzin made his NHL debut and began on a fourth line.
Thatcher Demko got the call in the crease for the Canucks. He was set to battle against Mike Smith, who patrolled the crease for the Edmonton Oilers.
The Canucks needed to keep the dynamic duo of Connor McDavid and Leon Draisaitl under control if they wanted to have a chance in this game.
Advertisement
Ad
Advertisement
Ad
The Canucks have high hopes for this season. With a healthy Pettersson, a substantial boost to the top-nine forward group, and the addition of two top-four defencemen, the Canucks are hoping to prove a lot of people wrong.
So without further ado, let’s go!

The Canucks came out with a lot of energy as fans hoped they would. They had the first few shots in the game as they clogged up the neutral zone to limit the Oilers’ chances of driving into their zone.
The first half of the period saw some strong play from Höglander as he was stick-handling well through the offensive zone and setting up scoring chances. Pettersson sent Horvat in on a partial breakaway after a quick line change. Horvat fired a wrist shot that Smith got his right pad on.
Advertisement
Ad
Advertisement
Ad
As it was in the preseason, the pairing of Quinn Hughes and Tucker Poolman drew the McDavid-Draisaitl line as their matchup. Hughes claims he worked on his defensive game a lot this offseason and this game was the first big test on his word.
Late in the period, the Oilers’ top line found the back of the net after a long shift. McDavid drew attention before passing the puck across to an open Darnell Nurse. Nurse fired a shot from the left side and the rebound went right to Jesse Puljujarvi, who stickhandled the puck so that he could just lift it over a sprawling Demko’s pad and in. 1-0 Oilers.
The third line had a great shift to swing momentum back in their favour. Once again, it was led by the great play of Höglander. The Oilers had a huge swing of momentum after the halfway point of the period and the Canucks needed to regroup after the conclusion of the period.
Advertisement
Ad
Advertisement
Ad

Oliver Ekman-Larsson looked good in his first period of play. He had an early scoring chance in the period and was playing physically in the neutral zone and in the corners. There were some shaky moments from his partner Tyler Myers but the pairing held up fine in the first 20 minutes of the season.
As he was for a lot of the preseason, Höglander was the best skater for the Canucks. He looks like he has found another gear in his sophomore season and it’s been impressive to watch early on in the year.

It took over 23 minutes of play but we got our first power play of the game when Tucker Poolman drew a slashing penalty that sent the Canucks to the power play.
The power play saw Chiasson as the net-front presence with Boeser being out of the lineup. Neither unit was able to amount any pressure as the Oilers put on a clinic with a few big clears throughout the two minutes.
Advertisement
Ad
Advertisement
Ad
The Canucks’ penalty kill was going to be tested next as Ekman-Larson took a cross-checking penalty with 13:13 remaining in the period.
Poolman, Dickinson and Justin Dowling made some good plays throughout the penalty kill and the Canucks were able to escape the 120 seconds without allowing a goal against.
Demko came up big at the mid-point of the period as he made a breakaway glove save on Kailer Yamamoto.
After the breakaway, the Canucks began to push the pace of the game and make a run on the shot chart total. Burroughs had a good scoring chance as Höglander found him streaking down the right side of the zone.

Höglander with a lightning-fast deke to set up Kyle Burroughs, who wades in from the blue line. Höglander then catches the rebound for a dangerous chance of his own on the follow-up#Canucks
20/ pic.twitter.com/hwFqoziGYE

We no longer have any right to complain about him.

It’s clear that Myers has been spending a lot of time with Daniel Sedin ever since he joined the Canucks’ front office.
The Canucks went to the power play as a result of the fight that followed Myers’ big hit.
They were able to set up and get some decent shots on Smith during this power play but still couldn’t solve the veteran keeper.
Just after the penalty expired, the Canucks took a too many men on the ice penalty, as they do. The dangerous Oily-boys power play went to work with 3:43 remaining in the period.
Advertisement
Ad
Advertisement
Ad
Zach Hyman took a holding penalty at the end of a McDavid-Draisaitl tic-tac-toe. It looked like Draisaitl was about to get his one-timer off from the McDavid cross-ice pass but instead, he fired a strong pass to Hyman in tight who tapped it in to make it 2-0 Oilers.
Time was ticking away but the Canucks were given a late opportunity to get back into this game. Hyman took a holding penalty with 42 seconds remaining and the Canucks’ power play went back out for their third attempt.

The Canucks pushed back in the second period but were unable to get anything on the board. They outshot the Oilers in the period and that came during some line shuffling from Green. Höglander and Podkolzin each got some time with the Miller-Pettersson duo.
Advertisement
Ad
Advertisement
Ad
The surprise third pairing of Rathbone and Burroughs was good in the second period. Rathbone was dynamic at moving the puck around in the offensive zone while Burroughs was solid defensively and made a couple of good pinches that led to scoring chances in the period.

It was a quick beginning to the period with a lot of back-and-forth action until Tanner Pearson drew a penalty and gave the Canucks another power play opportunity. This one came with 13:46 remaining in regulation and saw OEL take Hughes’ spot on the first power play unit.
Once again, the power play was unable to amount much and that brought them to 0/4 on the night.
The hockey gods were hoping for a comeback as another penalty was called on the Oilers at the halfway point of the period. The Canucks received their fifth power play opportunity of the game.
Advertisement
Ad
Advertisement
Ad
The power play finally struck gold and it came from the second unit. After some quick passing, Ekman-Larson fired a shot through a screen that found the back of the net for his first goal as a Canuck. 2-1 Oilers.

Höglander and Garland drew the assists on the OEL goal and the Canucks had just over seven minutes remaining to tie the game up.
Miller made a great play when gaining the zone and then Höglander thread the needle on a pass over to Hughes who snuck a quick shot past Smith on his short side. 2-2 after the Hughes goal.

Höglander finally rewarded for his efforts as he picks up the assist on Hughes' game-tying goal. #Canucks
40/ pic.twitter.com/6nVX6Se8E2

Pearson had a very dangerous scoring chance as Horvat made a beautiful pass to send him in point-blank on Smith. Pearson made a move to the backhand with speed but was robbed by a great save from Smith.
It was a frantic overtime as both teams were getting good chances but nobody could find the back of the net in the first three minutes of continuous play.
Pettersson made a heck of a move with one minute remaining and almost scored what would have certainly been a goal of the year candidate. He couldn’t quite get control of the puck at the end of the deke with a defender draped all over him.
Advertisement
Ad
Advertisement
Ad
Neither team scored in the overtime period and we were off to a shootout.

Nils Höglander had two points on the night. He was electric with the puck and made great passing plays all night. He had four shots on net and four individual scoring chances of his own.
Advertisement
Ad
Advertisement
Ad
An honourable mention has to be Juho Lammikko. He was strong in the possession numbers and really dominated the control of the puck in a fourth line battle. It was a strong first showing for the newcomer. He’s big and defensively responsible. The fourth line as a whole was good tonight before the lines began to get shaken up.

It was a pretty good game for the Canucks at five-on-five. They were able to control a lot of the pace of play and got rewarded late with a couple of goals from their top offensive defencemen.
”I thought we did a lot of good things in that game,” said Oliver Ekman-Larsson. “We battled back from two down in the third period. We’ve been talking about committing to defence and I thought we did a good job tonight. Getting sticks on pucks and those details.”
Advertisement
Ad
Advertisement
Ad
The Canucks were pretty strong defensively but the first 50 minutes of the game looked like a struggle offensively. The Canucks were not good on their first three power plays but found some momentum in their fourth attempt before scoring on their fifth go at the man-advantage.
”To fight back and get a point today was encouraging,” said Hughes when asked about the vibe around the room after game one of the season.
The Canucks will now travel to Philadelphia to truly kickstart the six-game road trip against Zack MacEwen and the Flyers. Note the 4 pm start time for Friday. Then, they will be back-to-back with a Saturday tilt against the Detroit Red Wings for another 4 pm.