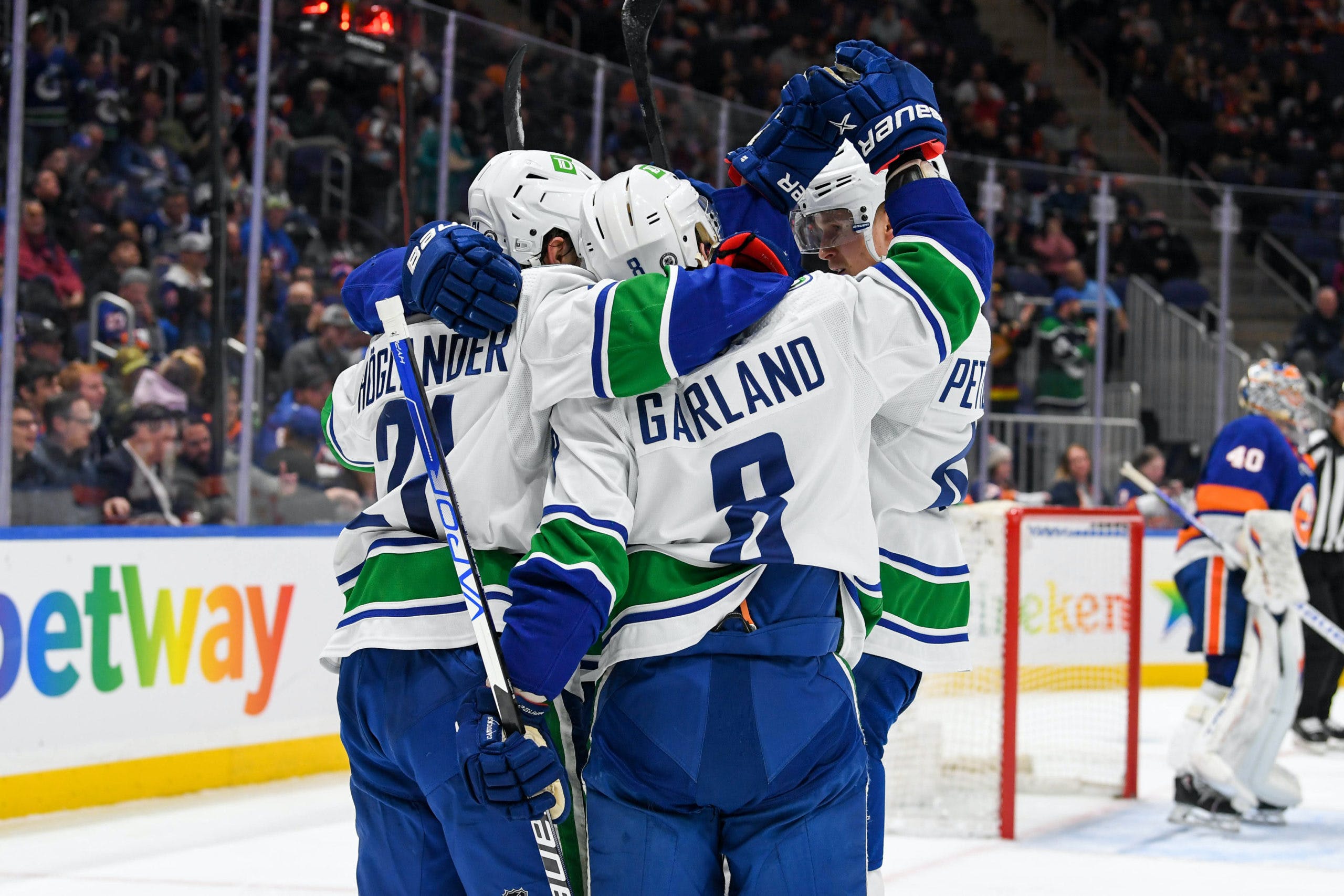 Photo credit: © Dennis Schneidler-USA TODAY Sports
By Faber
9 months ago
Comments
The road trip continues on as the Vancouver Canucks travelled to Long Island for a matchup against the New York Islanders.
The last time these two teams played each other, it was a horrible start for the Canucks as Jaroslav Halak had a bad night in net. It was the Canucks’ first visit to UBS Arena at Belmont Park and they were looking to leave with a pair of points.
There were some changes to the shape of the lineup as Conor Garland moved around to play with Elias Pettersson and Nils Höglander.

It was believed that Phil Di Giuseppe might get a chance to play his first NHL game of the season. That did not happen as Alex Chiasson and Höglander stayed in the lineup.
Advertisement
Ad
Advertisement
Ad
One day we will see PDG but Thursday against the Islanders is not that day. I’d really like to see Di Giuseppe get a chance, as he’s looked great in Abbotsford this year and sticks out as a player who’s too good for the AHL. Bruce Boudreau knows more than me though, I’m sure he’s got a plan.
As for the netminders, Thatcher Demko took the crease for the Canucks while Semyon Varlamov was called to protect the net for the Islanders.
With a 4:30 pm start time, it was another early one for Canucks fans. Puck drop is just around the corner.
Grab a bevy and let’s go!

The Canucks had a couple of shots hit the mask of Varlamov as it looked like their book was telling them to shoot high. After that, the Islanders had a bouncing puck hit off the top of the net and bounce into Demko’s crease. Demko was able to slide to the bouncing puck and kept the game scoreless. It was a busy couple of minutes filled with action at both ends.
Advertisement
Ad
Advertisement
Ad
Sebastian Aho took a holding call on Elias Pettersson with 13:35 remaining, and that sent the Canucks to the man-advantage.
Brock Boeser had a couple of whacks at a rebound from a Quinn Hughes shot on net. It was a better look for the first unit as they got shots on net but were unable to beat Varlamov.
It got quiet at UBS Arena for the middle part of the period as neither team was able to get consistent scoring chances and the second ticked away to the final stretch of the period. The Canucks were controlling a lot of the possession and seemed to spend a lot of time in the Islanders’ zone, they were just unable to mount much of a sustained attack in the first 15 minutes.
Anders Lee tripped Hughes with 1:57 remaining and the Canucks earned themselves another power play opportunity.
Advertisement
Ad
Advertisement
Ad
They were unable to get a goal on the power play but did win the shot battle by a count of 13-8.

It was a boring period and that’s great news if you’ve been keeping track of the Canucks’ losses since Boudreau took over. The Canucks seemed to have the momentum throughout the period and that was fuelled further by having two power plays. Most of the time was spent in the Islanders’ zone and it was an easy period for Demko.

The Canucks were unable to clear the zone for an extended amount of time and there was a bad giveaway from Tyler Myers. Noah Dobson collected the puck at the point and fired a shot past a screened Demko and into the back of the net. 1-0 Islanders.
The Canucks were able to fight back with a goal of their own after Travis Hamonic looked as though he tackled an Islanders defenceman, which forced a turnover. Brad Hunt jumped on the puck and fired him his first goal of the year. 1-1 after Hunt goal.
Advertisement
Ad
Advertisement
Ad

Brad Hunt scores his first goal as a Canuck and of the season! 🚨

The pace was cranking up at the halfway point of the period. The Canucks had a long offensive possession that ended with Hughes pinching in to give Boeser space at the point. Boeser then fired a shot-pass to the stick of J.T. Miller and he redirected it into the back of the net. 2-1 Canucks.

After scoring two back-to-back goals, the Canucks were pushing hard and led in shots by a count of 26-15 with a handful of minutes left in the second period.
The Islanders pushed back late in the period off of a faceoff play. Kyle Palmieri slid from right to left and found himself with a ton of space on the left side of the ice. He received a pass and wired a one-timer past Demko to tie the game. 2-2 after Palmieri’s goal.
Advertisement
Ad
Advertisement
Ad

It felt like the Canucks took control of the game in the second period but the scoreboard said otherwise. The Islanders ended the period with two goals surrounding the Canucks’ two goals in the middle of the frame.
The heatmap showed that the Canucks were getting good scoring chances off against the Islanders while strongly defending their own net and keeping the Islanders to the outside. The Canucks outshot the Islanders by a 14-9 count in the second period. It was all square after 40 minutes and we were off to the third period to decide on a winner.

The first two minutes were all about the Islanders’ attack. They were all over the Canucks and capitalized quickly after a giveaway by Brock Boeser. Anthony Beauvillier scored the unassisted goal off of the giveaway to give the Islanders another lead in the game. 3-2 Islanders.
Advertisement
Ad
Advertisement
Ad
The Canucks pushed back on the early rush of offence from the Islanders. They had some good shifts from their top-six lines. The Höglander-Pettersson-Garland line had a long shift in the offensive zone and had a pair of scoring chances and ended with the Islander icing the puck. The Canucks showed pushback early in the period after giving up a goal within the first two minutes.
The Pettersson line went back to work in the offensive zone and it resulted in the Canucks evening the score. Höglander was last to touch the puck after some strong work on the boards from the whole line. Höglander flew through the slot and fired a shot into the open net to tie the game. 3-3 after Höglander goal.

Höglander takes the 🐒 off his back!

Advertisement
Ad
Advertisement
Ad
It didn’t stay tied up for long as Vasily Podkolzin got his hands on a puck in the slot and ripped home a wrist shot to give the Canucks their second lead of the game. 4-3 Canucks.

The young wingers came through for the Canucks and you had to feel good for Höglander. He finally scored a goal after such a long cold streak. That goal being followed up by Podkolzin’s 10th of the season was great for the Canucks’ two young wingers’ confidence.
With five minutes remaining, the Canucks went with very quick changes as Boudreau loaded up to make the three most defensive lines. The Canucks stayed fresh and pushed the puck up ice when they forced turnovers.
Advertisement
Ad
Advertisement
Ad
The Islanders pulled their goalie with 1:45 remaining in the period. Demko made a big save on J.G. Pageau with 1:21 remaining. The Islanders took their timeout after Demko covered up the puck.
The Canucks came out with Miller, Pettersson, and Bo Horvat as the forwards to defend against an open net.
The three centres were able to hold it down and the Canucks skated off with a 4-3 victory.

I’m going to give tonight’s top performers to the Höglander-Pettersson-Garland line. The trio had some great shifts in the offensive zone and the Garland-Höglander combination did a great jump of being ferocious on loose pucks. They controlled 90.9% of expected goals when they were on the ice together.

The Canucks continue to bounce back after a loss and the fact that they are not losing consecutive games keeps them in the playoff race. It’s obvious that they need to string together some wins to gain more pace towards a playoff spot.
Advertisement
Ad
Advertisement
Ad
The biggest goal of the night may have been the Höglander goal. It was the goal that tied the game up and was Höglander’s first goal since January 1st. Head coach Bruce Boudreau commented to seeing Höglander finally break his cold streak.
“That’s going to do wonders for him, I hope. Getting the monkey off his back”
The Canucks pushed instead of falling back in Thursday’s game. Boudreau commented on the team’s fight on Thursday night.
“There was never any ‘woe is me’ feeling,” said Boudreau. “It was like, okay, boys, let’s keep pushing because we knew in the first two [periods] that we had opportunities.”
Boudreau also spoke on knowing that the opponent had a rough road trip and that his team needed to push on the tired Islanders, “we knew that their travel has been terrible,” said Boudreau. “[The Islanders] played five games on the road and they came home and they didn’t practice so they’ve kept going out and they might tire.”
Advertisement
Ad
Advertisement
Ad
The Canucks are in the spotlight on Saturday as they travel to Toronto to face the Leafs. This upcoming game may be the decision-maker on if the Canucks are going to be sellers or not at the deadline. A big win against the Leafs sends a message to the league and you’d have to imagine the players are well-aware of what is on the line for Saturday’s game.