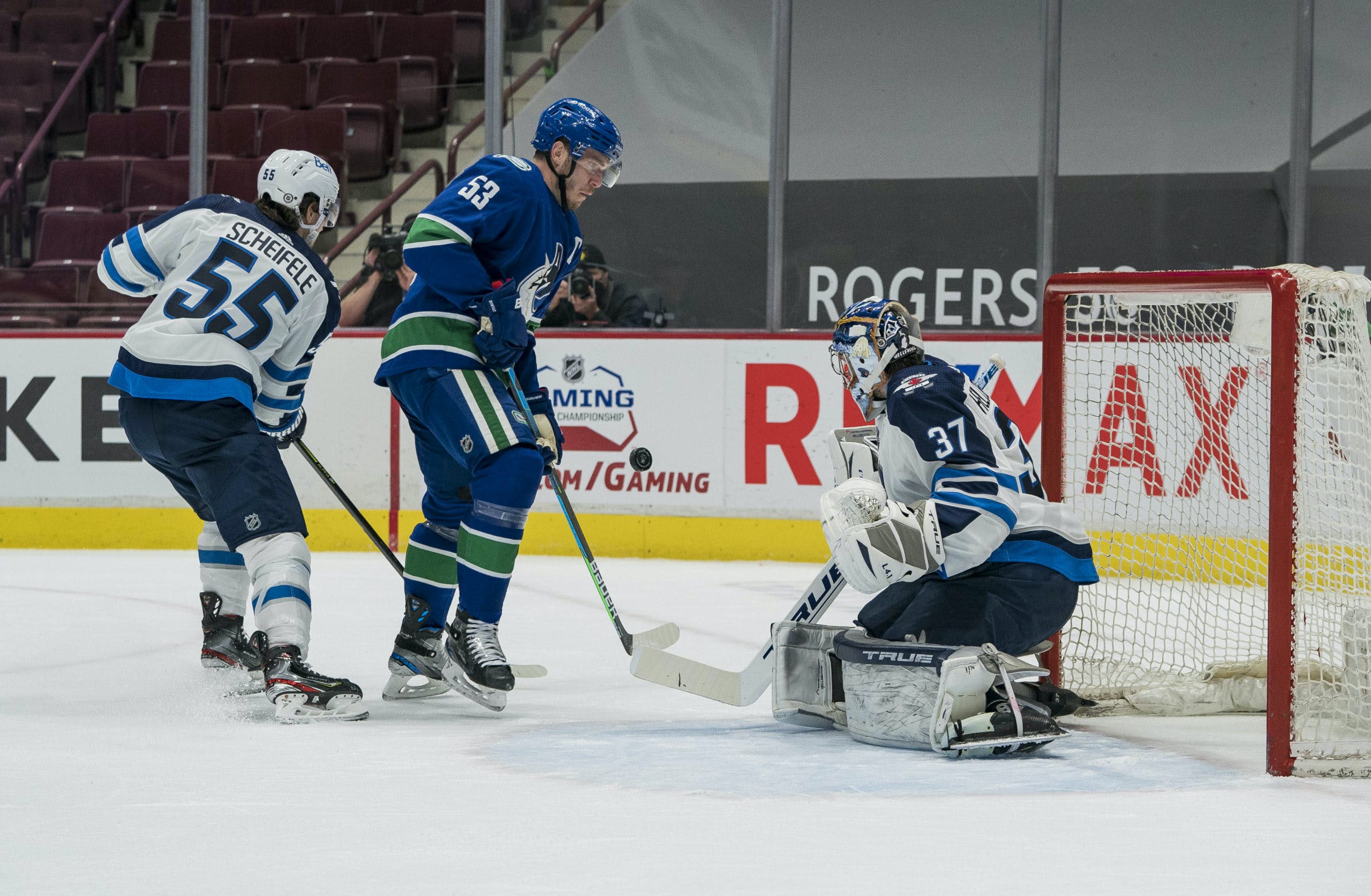 Photo credit: © Bob Frid-USA TODAY Sports
By Faber
1 year ago
Comments
After working very hard on a road trip, the Vancouver Canucks returned home for the first of two games against the Winnipeg Jets.
It was not a pretty game as the Canucks went on to lose 4-0 with the Jets pulling away in the third period of the contest.
Brandon Sutter was out for this game and that meant Tyler Graovac slid into the lineup for Travis Green’s squad.

Lines for the #Canucks in warmup vs. @NHLJets:

Without Sutter and Jay Beagle, the bottom-six looked very different and early on was boxed in their own zone.
Thatcher Demko was back between the pipes for the Canucks and Connor Hellebuyck patrolled the crease for the Jets.
Advertisement
Ad
Advertisement
Ad
It was a matchup between two of the league’s best and busiest goaltenders.
Let’s not waste any more words, it’s time for puck drop.
Let’s go!

Early on, both of the Canucks’ top six lines looked good. The line of J.T. Miller, Jimmy Vesey and Jake Virtanen was busy in the opening minutes and attempted a ton of shots on Hellebuyck.
That line and the Horvat line were doing a good job controlling the puck early on but were unable to get a goal on the board.
The Horvat line did end up giving up a goal at five-on-five when Blake Wheeler came down on a two-on-one and ripped a wrist shot through Demko. 1-0 Jets.
Wheeler had another scoring chance late in the period but Demko made a huge pad save.
Advertisement
Ad
Advertisement
Ad

Zack MacEwen took a penalty three minutes into the period and the Canucks went to work on the penalty kill. Vesey and Miller were the first forward duo out killing penalties.
Advertisement
Ad
Advertisement
Ad
It was nice to see Vesey out on the PK as that is something that he added to his game a few years ago after being a power play specialist in his first two NHL seasons.
MacEwen came out of the box and made a nice move on a two-on-one to get a shot off in tight on Hellebuyck, who made a big save to maintain the Jets’ one-goal lead.
The Canucks had an extended shift in the offensive zone as Vesey made some great plays to keep the puck in the offensive zone and did a great job keeping the cycle going.
After the long shift in the Jets’ zone, the Canucks earned their first power play of the game when Alex Edler took a stick to the face.
The first unit was unable to get set up and the best scoring chance came on a pass from behind the net to Nils Höglander.
Advertisement
Ad
Advertisement
Ad
It was another period that was flying by and with five minutes remaining, the Jets held onto their 1-0 lead.
Demko continued to lock it in as he usually does, the Jets were controlling a lot more possession than the Canucks. Aside from a 90-second shift in the Jets’ zone and a pair of MacEwen chances, there weren’t many positives for the Canucks in the period.
The Jets outshot them again in this period, this time by a count of 11-6.
The Canucks needed to battle back into this game, so let’s get to the third period!

Early on in the third, Horvat took a hard Edler slap shot off the foot and immediately went down the hallway to the dressing room after struggling to get to the bench.
Later, the Jets came in on a two-on-one and scored a weird one as Adam Lowry attempted a pass but the puck hit Travis Hamonic’s stick and fluttered over Demko and into the net. 2-0 Jets.
Advertisement
Ad
Advertisement
Ad
Lowry scored his second goal of the period when he jumped on a loose puck in the crease and buried it. The goal came after the Jets were able to maintain possession for at least a full minute, they made a full line change while maintaining possession and eventually got the goal they desired. 3-0 Jets.
We learned that Bo Horvat would not return to this game. That’s a major loss for a team that is now missing all four of their opening night centres.
The play was relatively quiet for the remainder of the period. The Jets had their lead and played cautiously after getting their three-goal lead.
The Canucks pulled their goalie with three minutes remaining but Demko had to scramble back and was beat by Paul Statsny to make it 4-0 Jets.
Advertisement
Ad
Advertisement
Ad
It was a tough finish for the Canucks as they finished the game without a shot on goal in the final nine minutes.
Jets win 4-0.

Today’s word of the day is, injuries!

The Canucks are now without all their opening night centres after Horvat went down.

Is this the first season where Jim can credibly play the injuries card? Down all 4 centres from opening night is tough

We will skip this tonight…

It was a tough game to watch that felt like it flew by. Hellebuyck was good but not good enough to say that he stole this game from the Canucks. The Jets broke it open in the third period and the Canucks just came out flat in the third period. Having their captain go down with an injury definitely didn’t help the team. If Horvat is to miss some time, it will be a huge loss for a Canucks team that is beginning to fall apart due to injuries.
They will have to wait and see which centre Kyle Dubas throws on waiver wire next.