Advertisement
Ad
CanucksArmy post game: Demko gets hot as Canucks break their cold streak with a 4-1 win over the Blackhawks 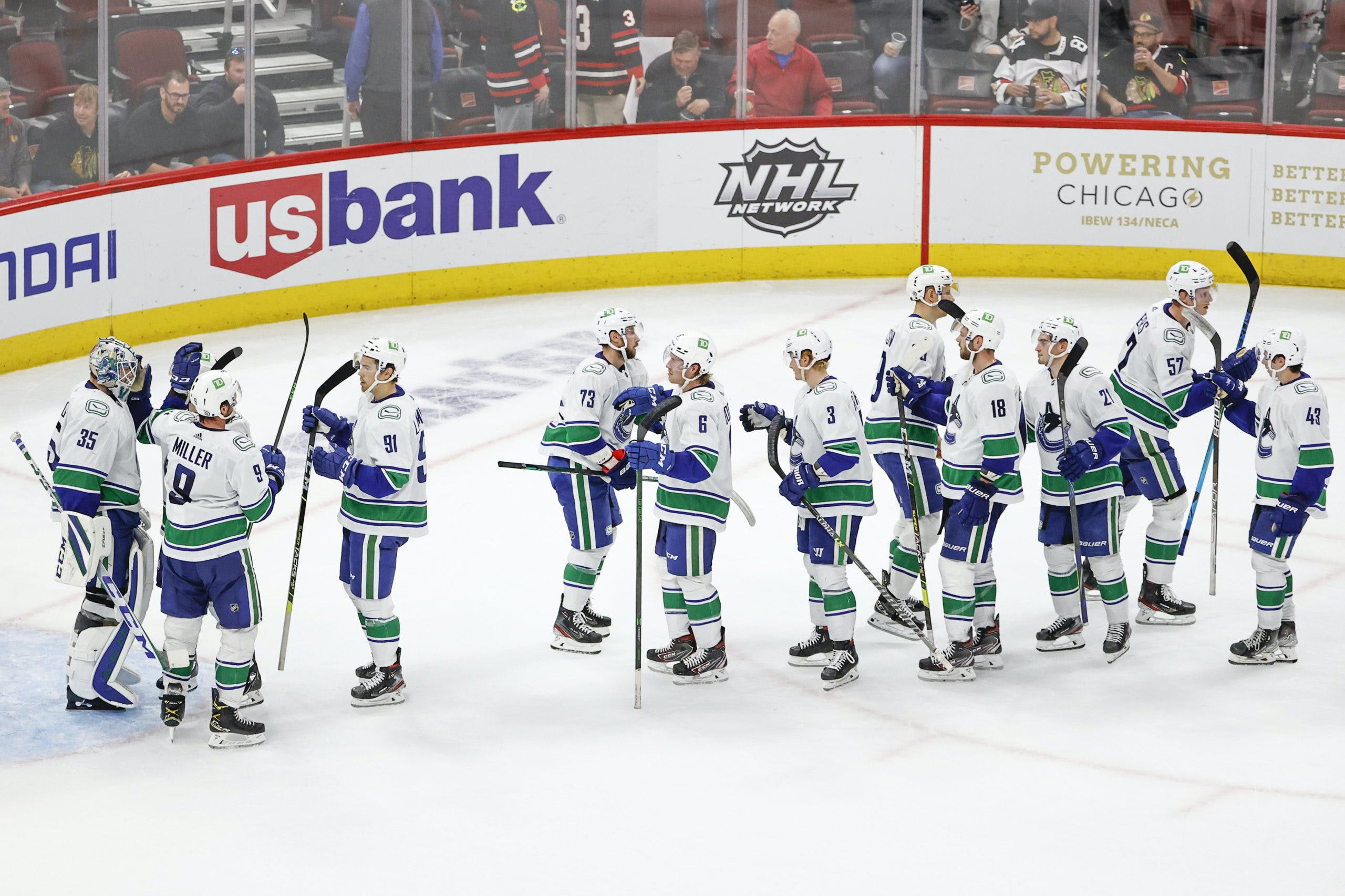 Photo credit: © Kamil Krzaczynski-USA TODAY Sports
By Faber
1 year ago
Comments
As the Vancouver Canucks continued on their road trip, they needed to have a bounce-back game in Chicago against the Blackhawks.
Travis Green has been receiving some heat on social media and the comments section here at CanucksArmy isn’t holding back either.
Green made some changes to the lineup as Vasily Podkolzin was scratched and Alex Chiasson drew back in.

Warmup lines for the #Canucks vs. @NHLBlackhawks

The biggest addition to the lineup came from the return of Quinn Hughes. He was back alongside Tucker Poolman as well as Oliver Ekman-Larsson getting back together with Tyler Myers.
Kyle Burroughs was another defenceman who came back into the lineup and was saddled up with Jack Rathbone once again.
Advertisement
Ad
Advertisement
Ad
Having Podkolzin out of the lineup was a head-scratcher but the lineup needed a shake-up after a couple of tough games against the Detroit Red Wings and Buffalo Sabres.
Thatcher Demko was right back in the crease for the Canucks and his counterpart was Kevin Lankinen for Chicago.
There was a 12-minute pregame ceremony for Patrick Kane playing his 1000th game and after that, we were all set for some hockey.
It’s game time.
Let’s go!

Chicago began by getting some quick shots on Demko as they took control of the shot share by a count of four to nothing before Jonathan Toews took a tripping penalty four minutes into the game to give the Canucks their first power play of the game.
Brock Boeser was moved down to the second unit as Alex Chiasson not only jumped back into the lineup but also went to the first unit.
Advertisement
Ad
Advertisement
Ad
The Canucks were unable to get any dangerous shots off and Chicago killed off the first man-advantage of the game.
The third line went to work after the power play. Nils Höglander gained the zone and fed the puck to Matthew Highmore who found Jason Dickinson in the slot who buried it with a great shot into the top corner. 1-0 Canucks.

Jason Dickinson goes post and in for his first goal and it gives the #Canucks the early lead in Chicago! pic.twitter.com/gRdOWJWtHr

Right after the goal, Burroughs took a penalty to give the Blackhawks their first power play of the game.
Demko made some great saves in the first bit of the power play but Kane found Alex DeBrincat on a cross-ice pass and he ripped it over Demko’s glove and into the top corner. 1-1 after DeBrincat goal.
Advertisement
Ad
Advertisement
Ad
Highmore took a tripping penalty and sent the Hawks back to another power play.
Myers took a very hard shot off his right knee as he turned to block a DeBrincat one-timer. He stayed down on the ice until forcing the refs to blow the whistle but Myers stayed on the bench and did not leave the game. The Canucks ended up killing the penalty off.
Höglander took a couple of hard hits late in the period and Burroughs stepped up for the sophomore to fight Riley Stillman. The fight was likely a draw but it was great to see Burroughs immediately step up for his teammate.
The period came to a conclusion and the teams skated off with the game tied at one goal apiece.

Demko was strong in the period. He was a little bit too deep in the crease on the DeBrincat power play goal but the Canucks needed to do a better job at defending the cross-ice pass. Demko saw a lot of quality shots in the period but looked steady throughout.
Advertisement
Ad
Advertisement
Ad
Höglander’s addition to the third line with Dickinson and Highmore looked to be working well. Green has said that Höglander can bring a boost to any line and he was doing exactly that in the first period. Höglander was moved up to play with Bo Horvat and Tanner Pearson for a shift late in the period to try and find some of their chemistry from last season.

Dickinson received a boarding penalty when he hit DeBrincat from behind just 2:10 into the period. This gave the Hawks their third power play of the game.
J.T. Miller and Juho Lammikko each had scoring chances while shorthanded and the Canucks were able to kill off the Dickinson penalty.
The Canucks maintained a longer possession and Pearson went to work in front of the net. Seconds after knocking over the goaltender while battling, he tipped in a Hughes shot to give the Canucks their second lead of the game. 2-1 Canucks.
Advertisement
Ad
Advertisement
Ad

100 career points for Quinn Hughes as his shot gets tipped in front by Tanner Pearson! #Canucks pic.twitter.com/xDHe6NlBKT

Hughes’ assist on the goal was his 100th career point.
The Canucks went back to the power play when Dylan Strome took a hooking call with 2:23 remaining in the period.
The Hawks took another penalty just 12 seconds into the man advantage. That meant 1:48 of five-on-three action for the Canucks.
Boeser jumped back onto the unit and scored on a second attempt in close after the Canucks brought a ton of quick pressure. 3-1 Canucks.

Brock Boeser at the side of the net pots his own rebound on the 5-on-3 #Canucks PP pic.twitter.com/gP8fT6vVQV

The Canucks were playing defence in the period as they made less egregious giveaways as well. They used the boards to get the puck out instead of risky passes through the middle of the ice.
The Lotto Line was getting outplayed hard in the second period. They were pinned in their own zone on multiple occasions and were unable to generate consistent pressure in the offensive zone.
It was another excellent period for Demko. He was facing much more scoring chances than the Canucks were able to produce at the other end. Demko held strong in the second and was a big reason why they were able to escape with a lead.
Advertisement
Ad
Advertisement
Ad

The Canucks went into a strong defensive formation to defend the Blackhawks in the third period. They earned a power play with 12 minutes remaining in the period but were unable to get much going. The best chance came after the penalty expired when the Blackhawks came down on a two-on-one, but Myers made a good defensive play to disrupt the attempted pass.
The first half of the period flew by as the Canucks simply sent one forechecker in and were content gaining possession, crossing the centre line and dumping the puck in before heading to the bench for a change.
The Hawks pulled their goalie with just over three minutes remaining and drew a penalty on Conor Garland with 3:10 remaining.
Demko continued to have a good game as he made some big saves early on in the six-on-four advantage.
Advertisement
Ad
Advertisement
Ad
Garland flew out of the box and received a pass from Poolman to score the Canucks’ first empty-net goal of the season. 4-1 Canucks.
Final.

Thatcher Demko was excellent on the night. He made 28 saves on 29 shots. He saves 1.32 goals above expected and saw 29 scoring chances against. Though the Canucks were able to clean up with a tidy 4-1 win, Demko was a big reason why. He faced a ton of high-danger shots throughout the game

The Canucks were definitely better in this game but still had to lean on their goaltender to be their best player and secure them the victory. The Hawks had more shots, more scoring chances and controlled the majority of the Corsi as well. The Canucks were definitely better than they were in the previous two games but they still have a long way to go.
Advertisement
Ad
Advertisement
Ad
“We’re not trying to prove anything to anyone outside of our group,” said Demko. “Last year wasn’t good enough for our group and we need to make sure that we’re not falling into those patterns again. Tonight was a great job to make sure that we weren’t doing that.”
As for Green, he benched Podkolzin for the first time this season and his team ended up coming out with a win. Chiasson played under eight minutes and Lammikko played just over six. Green has obviously been shortening his bench in third periods and it has shown in each of the five games this season.
Green was “very pleased” with his group on Thursday night. “I thought we managed the puck well,” said Green. “We played a smart game, but a hard game. There are always certain things you have to do in the game, there’s always a price to pay to win and I thought our team did that tonight.”
Advertisement
Ad
Advertisement
Ad
The Canucks head to Seattle to wrap up their six-game road trip at the Kraken’s home opener. Saturday is set to be a fun one as this Pacific Northwest rivalry cranks up.