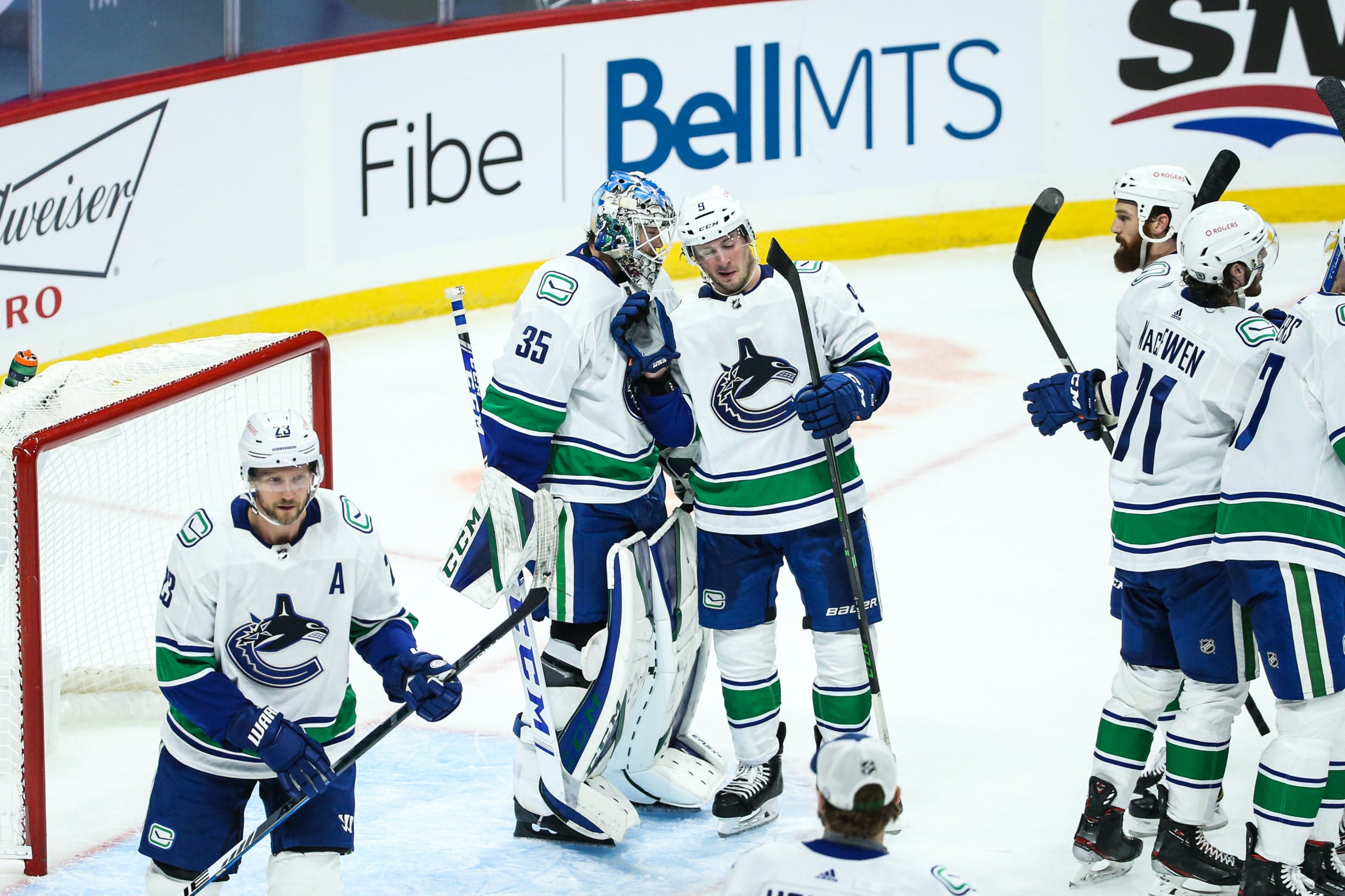 Photo credit: © Terrence Lee-USA TODAY Sports
By Noah Strang
1 year ago
Comments
The Canucks entered this game against the Winnipeg Jets fresh off a three-game winning streak. Granted, they were all against the lowly Ottawa Senators. The Canucks had lost ten straight against the Jets but that wouldn’t be the case tonight as they put together one of their finest performances of the season.
From start to finish they managed to play much better defence than they have previously this season and they received scoring from both the bottom-six as well as the top-six. When everything is clicking as it was tonight, the Canucks are a scary sight and a team that looks like they could challenge for the North Divison title.

Advertisement
Ad
Advertisement
Ad
The Canucks stuck with the same lineup that they used in the previous game against the Ottawa Senators. This was the first game where head coach Travis Green really had to make a decision on which goalie would get the starting nod and he chose to roll with Demko who had two strong games against Ottawa.

For those that were worried about Brock Boeser’s low goal totals last season, worry no more as he has been absolutely electric to start the season. He scored another one early in this game, dangling around an outstretched Hellebuyck after receiving a great pass from Edler right in front of the net. 1-0 Canucks.

Advertisement
Ad
Advertisement
Ad
The lead wouldn’t last long as the Jets struck back less than two minutes later on a shot from Mason Appleton right off an offensive zone face-off. Demko was forced to make a few saves before that, but the shot from Appleton was placed perfectly and beat the goaltender clean. 1-1.
The Canucks’ second power play unit got a chance to take the ice but neither them nor the first unit who finished the shift was successful, generating only one shot. Höglander continues to amaze and every game as his confidence and comfort-level continue to rise. Check out this slick spin-move to enter the zone.

He was rewarded for his effort as he batted a puck out of mid-air into the back of the net later on that shift. 2-1 Canucks. This was the second goal on just four shots for the Canucks against former-Vezina winner Connor Hellebuyck.
Advertisement
Ad
Advertisement
Ad
The Perreault – Lowry – Appleton line for the Jets continued to press, using their physical play style to separate Canucks’ defenders from the puck and create chaos, but Demko was up to the test as he made some big saves. The Jets continued to pressure to end the period but couldn’t solve the former-Boston College goaltender.

Boeser losing his helmet is a candidate for best moment of the period. #Canucks #CanucksTwitter

Near the end of the period, Brock Boeser’s helmet came off, showing off his wonderful hair. For those that were worried, don’t. #TheFlow is still magnificent as ever.

The second period began with captain Bo Horvat getting called for a penalty which he strongly disagreed with, so strongly in fact that you could hear his displeasure over the broadcast. The Canucks killed the penalty — even getting a chance going the other way in the process — and shortly after, the Lotto Line went to work and got back to their usual work of lengthy cycles.
Advertisement
Ad
Advertisement
Ad
Later in the period, it was the big fella, Zack MacEwen, who parked himself in front of the net and tipped in a point shot. 3-1 Canucks.

Miller makes some moves and feeds to Benn who has hit shot tipped in by #TheBigFella, Zack MacEwen parked in front of the net! #Canucks take a 3-1 lead on MacEwen's first of the year pic.twitter.com/mhVG7ZtNgg

It was Jordie Benn’s point shot that was tipped in as the veteran continues his strong play next to Quinn Hughes.

It’s 12:19 am in PEI and you know they are going wild after they MacEwen goal!

Despite the fact that he will only receive a secondary assist on the scoresheet, JT Miller was crucial to making the play happen as he used his slick hands to evade some Jets’ defenders and get the puck to Benn.
Advertisement
Ad
Advertisement
Ad
Brock Boeser continued his great play and drew a slashing penalty later in the period, giving the team a chance to add to their lead. The second unit started the power play but they struggled to get set up. The first unit got their chance after a Pearson shot was deflected out of play, but the best chance ended up being a Jets breakaway which Adam Lowry flubbed.
A board battle would result in Höglander throwing an elbow — something Canucks fans have heard about but haven’t had much of a chance to see — and the resulting 4-on-4 would feature a Pettersson chance but not much more than that.

Advertisement
Ad
Advertisement
Ad
After getting dominated at 5-on-5 to the tune of a 27.28 xG% and only five scoring chances to the Jets’ fifteen in the first period, the second offered a reversal of the roles. Overall, it was one of the Canucks’ best periods of the season so far.

The Canucks entered the third period looking to put this one away and the early goings featured plenty of good play for Vancouver. Both the Lotto Line and the Horvat Line had extended offensive zone time, though the closest the puck came to going in the net was an Alex Edler point shot that rang off the post.
When Blake Wheeler went to the box for holding, it was the first time that the Canucks’ top power play unit started the man-advantage. However, it was the second unit that had the better chance, as Sutter was denied on the classic Canucks one-timer from the slot.
Advertisement
Ad
Advertisement
Ad

PP2 with a great look as *checks notes* Brandon Sutter rips a one-timer into Helle's pads off of a smooth tic-tac-toe play from Höglander and Pearson #Canucks #Hogwatch #HotGirlSutter
33/ pic.twitter.com/STfg656gwO

Thankfully for the Canucks, Andrew Copp took a penalty with just under half the period remaining and the Canucks’ delayed penalty nullified the possible Jets’ powerplay. Instead, we got some 4-on-4 hockey, where the extra space on the ice is perfect for Elias Pettersson and Quinn Hughes to put the pressure on Hellebuyck.

Hellebuyck the only reason Winnipeg still in this.

Off a few strong Hellebuyck saves, the Jets were sprung the other way, and had a 2-on-1 which Nate Schmidt broke up with some beautiful stick work on a Tyler Myers-esque slide.
Advertisement
Ad
Advertisement
Ad
From there it was all about defence and goaltending and the Canucks proved that they know how to hold onto a lead. Demko made a couple of big saves and it was Boeser who would collect a puck that got caught on a broken stick and fire it into the empty net. 4-2 Canucks

Natural stat trick was down tonight, no fancies tonight.

Brock Boeser scored both the first goal and the last goal for the Canucks and was dangerous all night. He drew a penalty and his two-goal night launched him into first place for goals in the NHL, ahead of Connor McDavid who scored two of his own tonight.
Boeser has shown an ability to score in multiple ways this season — scoring in tight tonight as well as last game — and seems to be on pace to match last season’s goal total in way fewer games. His natural chemistry with Pettersson is evident and on nights like tonight, everyone is reminded of how exciting the Canucks’ young core is.
Advertisement
Ad
Advertisement
Ad

What more can you ask for? The Canucks played a great all-round game and dominated in all facets. The score would have been much more lopsided if it were not for the great goaltending of Hellebuyck and it got the road trip started off on the right note.
The Lotto Line dominated for long stretches — cycling the puck deep in the Winnipeg zone — and they look as if they have refound their mojo. Thatcher Demko could have easily been the selection for player of the game as he made several spectacular saves, even if the Canucks did play better defence in front of him.
Overall, perhaps the best top-to-bottom performance by the team this year and one that inspires hope moving forward.

Next up the Canucks travel to Montreal where they will try to take revenge on the Canadiens after a tough set of three games in Vancouver. To climb the standings the Canucks are going to need to continue to perform like they did tonight and steal some points back from Montreal.
Advertisement
Ad
Advertisement
Ad