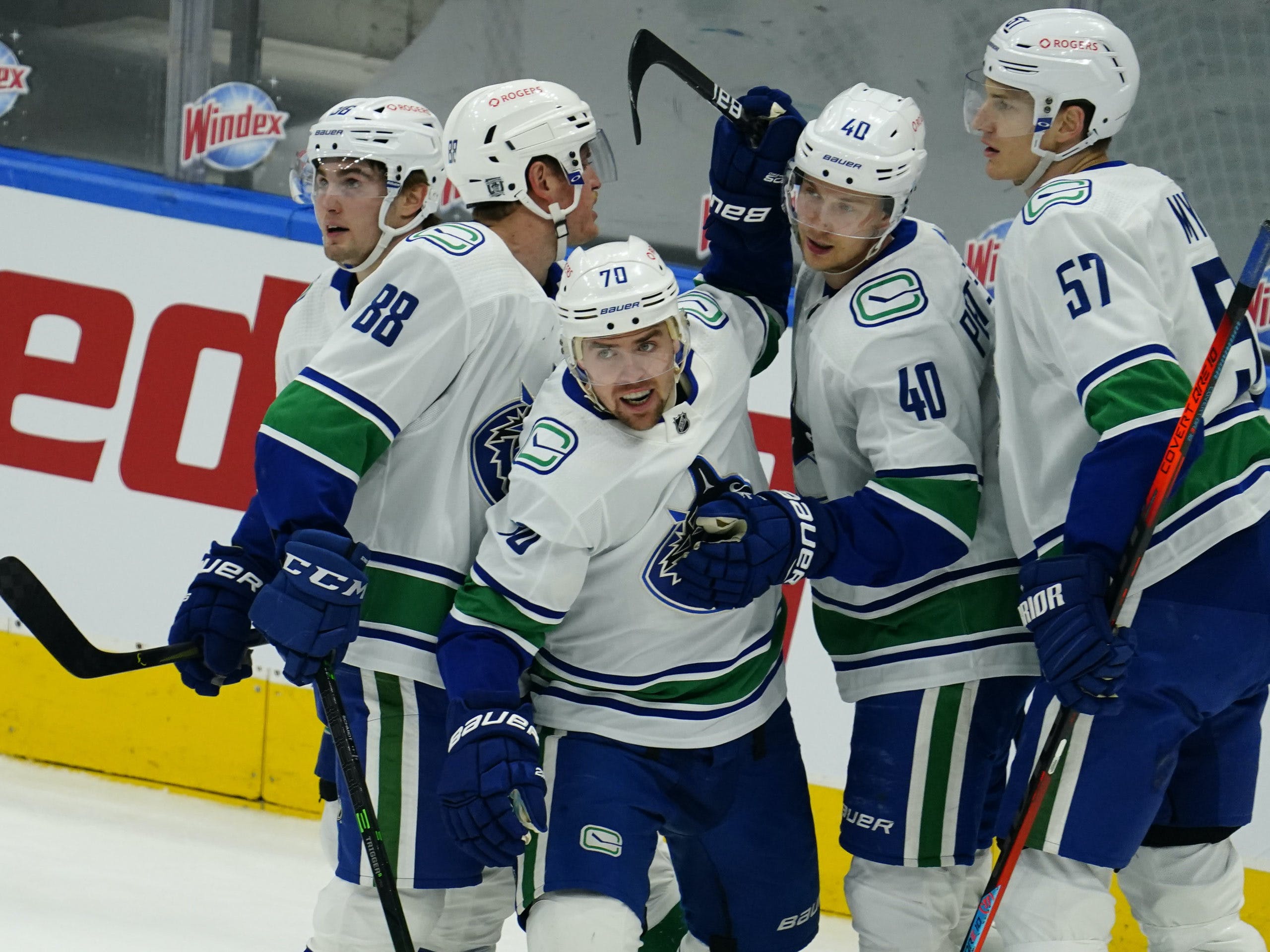 Photo credit: © John E. Sokolowski-USA TODAY Sports
By Faber
1 year ago
Comments
The Vancouver Canucks were coming off of two losses to the Montreal Canadiens heading into the fourth game of their six-game road trip.
They continued to struggle as the Toronto Maple Leafs gave them all they had and dominated in a 7-3 pumping of the Canucks.
Travis Green confirmed in the morning media availability that Thatcher Demko would be in the crease while Jake Virtanen drew back into the lineup with Zack MacEwen being the casualty. Green once again went away from the Lotto Line and re-introduced Virtanen to the fourth line.

**FIXED** Lines for the #Canucks vs. @MapleLeafs

The Leafs started Frederik Andersen between the pipes.
It was time for Canada to tune in as the Canucks took on the Leafs for the first of nine times this season. The Leafs were coming off of a four-day break and would be well-rested and all practiced up for Thursday’s tilt.
Advertisement
Ad
Advertisement
Ad
Let’s not dilly-dally anymore, it’s time.
Let’s go!

Thatcher Demko was tested early and often as the Leafs brought their “A-game” in the opening few minutes. The pressure resulted in Auston Matthews coming down the left wing and leaning on J.T. Miller as he drove the net and fired the puck through Demko’s legs. 1-0 Leafs.
The Pearson-Pettersson-Hoglander line was able to get things back to even. Hoglander brought the puck out from behind the net and a blade battle ensued. It resulted in Tanner Pearson getting his stick on the puck and past Andersen. 1-1 after the Pearson goal.
The Pettersson line generated a couple of scoring chances after the goal. The Canucks were just starting to build a bit of momentum when Quinn Hughes took the first penalty of the game to send the Leafs and their first ranked power play to work.
Advertisement
Ad
Advertisement
Ad
The Leafs’ power play was 13/30 coming into the game and they didn’t waste much time on their first attempt. Jason Spezza ripped a shot from the right side and into the far side past Demko. 2-1 Leafs.
Tyler Myers took a penalty with 7:04 remaining to give the Leafs their second man advantage of the game. The Canucks were able to kill off this power play attempt and continued on in the period trailing by one.
Jalen Chatfield delivered a big hit on Alex Kerfoot. It appeared to be from behind but the turning motion of Kerfoot may have made it unavoidable. Either way, it looked pretty bad for Kerfoot but he was fine.
The Leafs controlled a lot of the zone time through the first 20 minutes. They were able to establish a cycle and have longer possessions in the offensive zone. The combination of that and two power plays had them outshooting the Canucks 12-6.
Advertisement
Ad
Advertisement
Ad

Leafs defenceman Travis Dermott was injured in the first period and did not return for the second stanza. That meant that the Leafs were down to five defencemen for the remainder of the game.
The teams traded chances in the first two minutes of the period. Demko made a big save on Matthews and the Leafs were able to scramble and clear a loose puck away from their crease.
Just over three minutes into the period,  Matthews struck again. Demko got twisted up as Mitch Marner twirled around behind the net and Demko looked over the wrong shoulder. Matthews fired a wrist shot into the open net with Demko out of position. 3-1 Leafs.
Before the announcer could say Matthews’ name, Bo Horvat scored his sixth of the season and first in eight games to cut the Leafs’ lead back down to one. 3-2 Leafs after Horvat goal.
Advertisement
Ad
Advertisement
Ad

The Pettersson line continued to have success in this game as they followed up the Horvat goal with another offensive zone shift that resulted in multiple scoring chances.
The 5-on-5 play was starting to crank up and Spezza took the momentum to the bank. He scored his second goal of the game when he came in on a 3-on-2 and launched a wrist shot past Demko’s glove side. 4-2 Leafs.
The Canucks weren’t making horrendous turnovers at the rate they were against the Montreal Canadiens, but the Leafs were just quicker onto every loose puck. Canucks players were caught watching the puck while the Leafs’ forwards worked to gain possession on every shift. Once again, Myers and Miller looked out of place or disengaged in the defensive zone.
Advertisement
Ad
Advertisement
Ad
With the pressure came another crack as John Tavares scored the 350th goal of his career with just over two minutes remaining in the period. 5-2 Leafs.
The Canucks got their first power play with 1:21 remaining in the period when Pettersson took a slash as he moved through the neutral zone.
The Leafs outshot the Canucks 11-8 in the middle period. After 40 minutes, the Leafs had 21 scoring chances compared to the Canucks’ 10.
This team once again simply looked outmatched.

The Leafs killed off the remainder of the power play to begin the period. They had a scoring chance shorthanded when Marner picked off a Pettersson pass.
The Leafs earned another power play attempt just two minutes into the period. They had a few scoring chances but the Canucks held them off the scoresheet this time. The Leafs held possession for the entirety of the power play and looked dangerous.
Advertisement
Ad
Advertisement
Ad
Everything began to snowball when Spezza scored his third goal of the game as he walked around Edler and Demko before burying it on the forehand. 6-2 Leafs.
Brock Boeser took a hooking call with 13:23 remaining in the period and I was off to find some Tweets for our “Best of Twitter” segment because this game was over.
Kerfoot took a penalty for holding the stick and it was time for some 4-on-4 hockey. Tavares took an interference penalty when he kicked out Hughes’ skate. Hughes took a few seconds to get up as he fell hard on his tailbone.
The Canucks went to work on a 4-on-3 power play. Miller walked in and fired a wrist shot from the left side to make things almost interesting. 6-3 Leafs after the Miller goal.
Advertisement
Ad
Advertisement
Ad
With 10 minutes remaining, the penalties all expired and we were back to 5-on-5 hockey.
Mitch Marner scored with 8:23 remaining. 7-3 Leafs.
Wayne Simmonds landed a big hit on Hughes in the corner and Jordie Benn stepped in to fight Simmonds. There were three minutes left in the game that felt like it would never end.
It finally ended. The Leafs outshot the Canucks 14-5 in the third period. 7-3 Final score.

The #Canucks totally could have won this game but they ran out of time.

I hear that’s a valid excuse these days.

our daughter’s reaction to seeing her dad on tv cc: @risingaction 🤦🏼‍♀️ pic.twitter.com/0UWSkhYAe0

Podkolzin’s nickname will be the Moscow Mule. This is my greatest accomplishment. @QuadreIli @CanucksArmy

I think the General is a better nickname for Podkolzin, just watch the way he plays.

The Pearson-Pettersson-Hoglander line was really the only bright spot. They played together for 8:19, had five shots for and three against while having four scoring chances for and only one against. They weren’t very good but the team as a whole was horrible so this is the best we got.

Change is not just wanted anymore, it’s needed.
This game was another demoralizing loss for the Canucks in a season where it looks like half the games could go that way. The team was outplayed in every area of the ice. They were slower than the Leafs, had a lower effort level and couldn’t execute their gameplan.
Advertisement
Ad
Advertisement
Ad
Bo Horvat said that “we need to get back to playing Canucks hockey” and he’s right. The problem is that we don’t really know what Canucks hockey is anymore. The team has been trying to rebuild and win now for years. Things could get really ugly if they have another showing like this on Saturday night.
The Canucks will play the Leafs for game two of the three-game series Saturday at 4 pm.