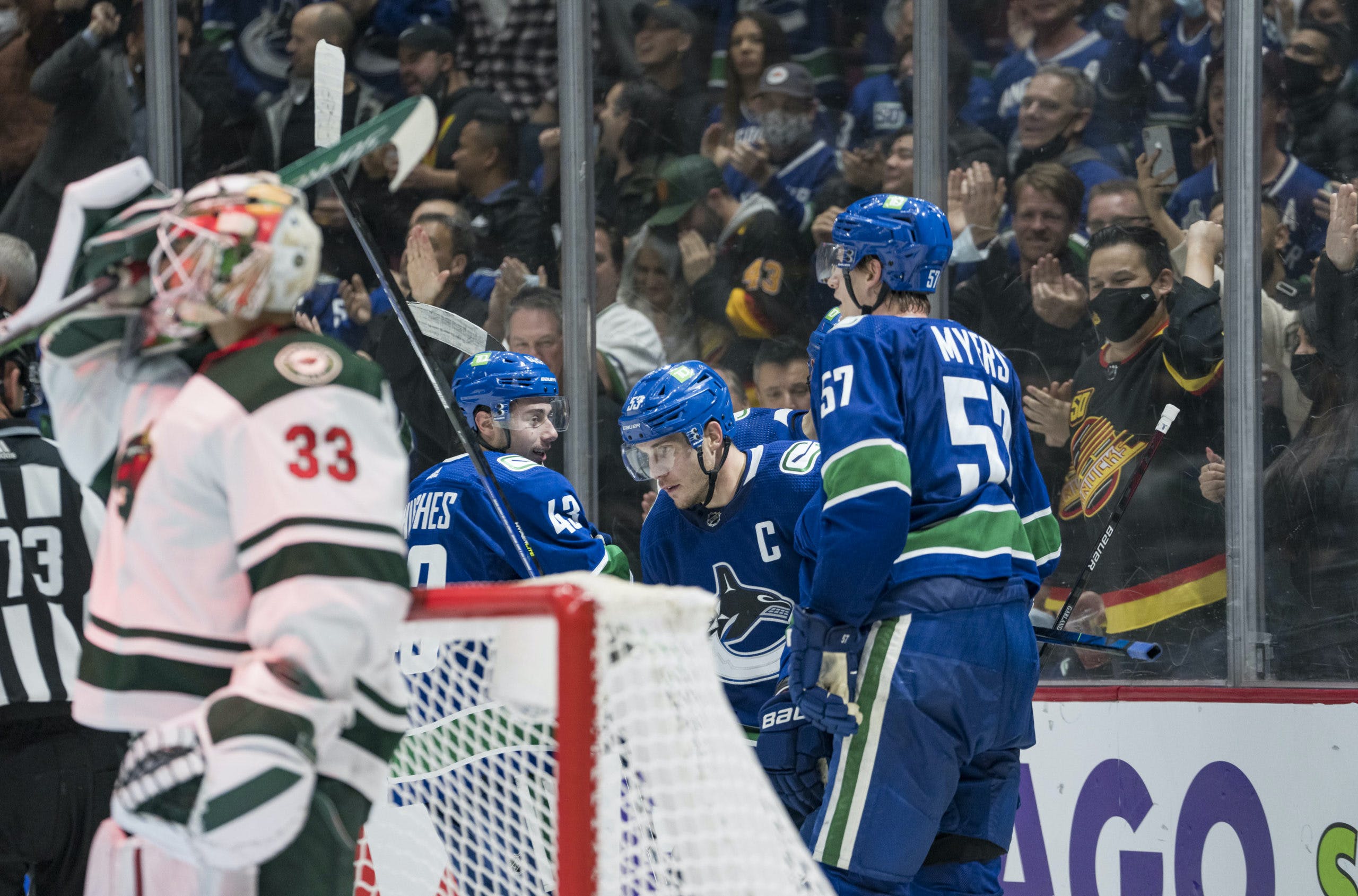 Photo credit: © Bob Frid-USA TODAY Sports
By David Quadrelli
1 year ago
Comments
It’s been 595 days.
595 days since Canucks fans watched Bo Horvat rip twine in a packed Rogers Arena.
595 days since fans saw Elias Pettersson dance his way through traffic, with ooo’s and ah’s pouring down from the seats.
When the familiar voice of public address announcer Al Murdoch boomed over the loudspeakers to introduce the Canucks for warmup, the fans who had arrived early rose to their feet and let out a thunderous cheer.
But that cheer paled in comparison to the one let out when the Canucks were re-introduced for the start of the actual game.
The intro video featuring a speech from head coach Travis Green had the fans loud right from the get go, and it was bedlam at Rogers Arena for the first time in a long time before the puck had even dropped.
Advertisement
Ad
Advertisement
Ad

With Justin Dowling and Jason Dickinson unable to play, the Canucks went with the same lineup they used at morning skate.

#Canucks project lineup for their home opener vs. #MNWild based on line rushes in warmups:

Thatcher Demko started in goal for the Canucks while Cam Talbot suited up for the Wild.
Without further ado, let’s do this!

The game began with a quality chance for the Canucks right off the hop, as Brock Boeser moved in on a two-on-one with Vasily Podkolzin making a mad-dash for the net. Unfortuantely for the Canucks and the fans who have waited a long time to celebrate a goal inside a packed Rogers Arena, Podkolzin couldn’t handle the pass.
It was one of those chances that, had he converted on it, the roof would have likely blown off of the place.
Side note: There was a “Petey” chant early in the game, for no particular reason. He didn’t have the puck, in fact, he didn’t even come close to it. He just took his first shift in a while and fans showed their appreciation.
Advertisement
Ad
Advertisement
Ad
Hey, who are we to judge? This city loves them some Pettersson, and for good reason.
Vancouver native Kyle Burroughs took a cross-checking penalty 4:57 into the period and the fans absolutely let the refs hear what they thought about the call.
With the artificial crowd noise that played last season, there wasn’t one “refs you suck!” chant, or a simple bull — er — poop chant.
Tonight though?
It may have been a while, but the fans haven’t forgotten the classics.
Justin Bailey, who was recalled from Abbotsford this morning, was on the first penalty kill unit tonight and had perhaps the strongest first period of any Canucks forward.
He showed off his trademark speed, and showed good attention to detail on the PK and in the defensive zone. He had a huge blocked shot that garnered a loud cheer from the crowd.
Advertisement
Ad
Advertisement
Ad
“You know what I liked his game tonight,” said head coach Travis Green of Bailey’s game. “I liked it. It gives us a bigger body. It gives us some speed, too and I thought he used it well. We told him to go down and kill some penalties down there [in Abbotsford] and he did and we put him right into the fire tonight. I thought he had a good game tonight.”
After the penalty expired, there were a whole bunch of sloppy plays and failed breakouts from the Canucks’ end.
Then Mats Zuccarello opened the scoring after getting in behind the Canucks’ defence. 1-0 Wild.

Mats Zuccarello gets a stretch pass in behind the #Canucks D and opens the scoring pic.twitter.com/LByCO87UPl

Minnesota then took a penalty with 2:43 remaining after Matt Dumba hauled down Justin Bailey and was penalized with a tripping penalty.
It was the perfect way for Bailey to cap off an extremely positive first period in his 2020-21 season debut.
Advertisement
Ad
Advertisement
Ad
The power play got to work. They were good last game, but were not good in this instance.
They failed to get set up, and the penalty expired with the first period following suit shortly thereafter.

Right off the bat, Tucker Poolman forced Thatcher Demko to make a big save on Kirill Kaprizov after fumbling the puck.
Minnesota controlled the zone shortly after that, and a shot rang off the stick of Kyle Burroughs, breaking the Canucks’ defenceman’s stick in the process.
This left a loose puck right in the slot and Burroughs with no means to clear it.
Jonas Brodin pounced and 2:27 into the second period, it was 2-0 Wild.
Not too long after, Oliver Ekman-Larsson went off for a line change and and the Wild quickly snapped the puck up the ice to set a partial breakaway. Rathbone hustled back to try to break up the play, but the Canucks had to be bailed out by Demko.
Advertisement
Ad
Advertisement
Ad

The Canucks got another power play opportunity after Nick Bjugstad took a hooking penalty. The power play was generating some good looks and needed to take advantage after Marcus Foligno broke his stick while stranded out killing a penalty with all the Canucks’ top gunners out.
A slick tic-tac-toe pass from Elias Pettersson to Alex Chiasson parked in front cut down the Wild lead to make it 2-1 Wild.

“That was a good read by Petey there,” said Chiasson post game.
Much like they did all game long, the Wild’s strong forecheck was causing all sorts of problems for the Canucks in the second period. The Canucks struggled to generate much of anything at 5 on 5 tonight, but luckily, were given another power play late in the second as Rem Pitlick hooked Nils Höglander to send the Canucks back to the man advantage.
Advertisement
Ad
Advertisement
Ad
The Wild killed off the penalty and sprung Pitlick with a breakaway pass as soon as he stepped out of the penalty box.
The Wild forward pulled off a slick move and had Demko sliding to his left, but couldn’t beat the post.
This one remained 2-1 heading into the third and final frame.

Tucker Poolman played just three shifts in the second period and left with an upper body injury. “Not sure exactly what it is,” said Green.
In his absence, the Canucks relied heavily on Tyler Myers and Kyle Burroughs.
Roughly three minutes into the third, Boeser created a good opportunity but rifled a wrist shot wide of the goal. The Wild quickly transitioned the other way, and Dumba was able to convert to make it 3-1 Wild.
The two sides went back and forth for most of the third, but the real story started when with less than five minutes in the third and their team down by two, Canucks fans started to get loud during a stoppage in play.
Advertisement
Ad
Advertisement
Ad
And I mean, really loud. And they didn’t really stop, either.
Seemingly channelling the energy radiating throughout the building, Bo Horvat scored a beautiful backhand goal to bring the Canucks within one with a little more than four minutes remaining. 3-2 Wild.

Bo Horvat powers it to the net and gets the #Canucks within 1! pic.twitter.com/8k5cXJwghD

“It was just really refreshing to see everybody in the building,” said captain Bo Horvat. “It was a really exciting night. It was really fun having fans back in the building again. It was awesome to see and when we gave them something to cheer about, they were cheering loud and unfortunately we couldn’t get them the win, which they deserved. But now we’re gonna get them the next one.”
Unfortunately, the Canucks failed to get set up in the Minnesota end to try to tie this one up, and lost by a final score of 3-2.
Advertisement
Ad
Advertisement
Ad

Justin Bailey had about as good of an audition as anybody could have hoped for. He was showing off his trademark speed and showed astute attention to detail that didn’t go unnoticed from the coaching staff.
Thatcher Demko was good again. I’ll just leave this tweet from the Canucks’ owner tonight as the recap of Demko’s performance:

Somebody better buy Demko dinner after this one.

It was a disappointing home opener for the Canucks against a very solid Minnesota Wild team. The third pairing of Kyle Burroughs and Jack Rathbone struggled tonight, and the Canucks are certainly hoping that Poolman’s injury isn’t serious.
All in all, the Canucks need Elias Pettersson and others to get going at five on five soon. Winning the special teams battle is great, but you need to get the job done at five on five if you want to win in this league.
Advertisement
Ad
Advertisement
Ad
The Canucks are back at it on Thursday night when they will welcome the Philadelphia Flyers into town.