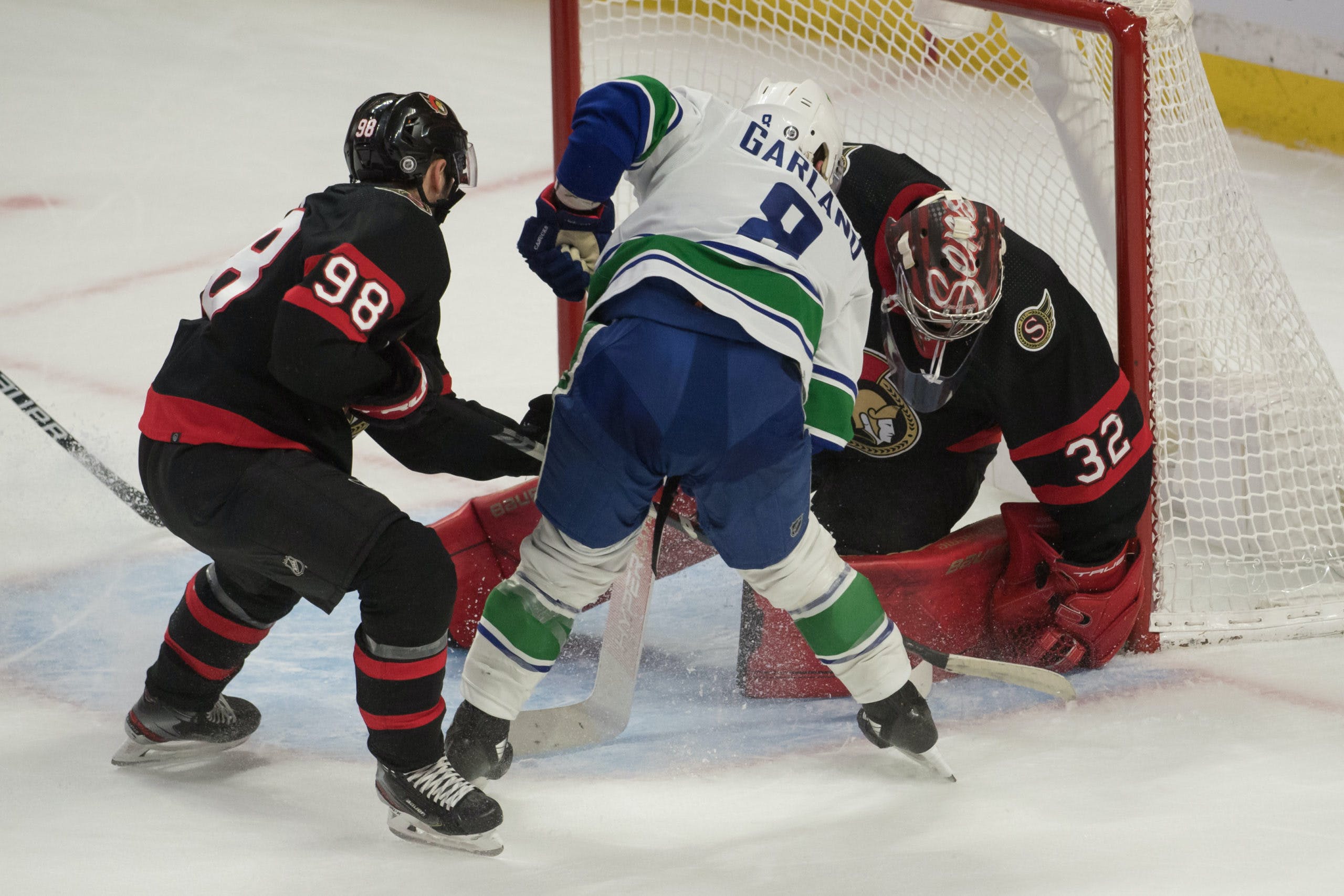 The Vancouver Canucks were in Ottawa tonight to close out their road trip and had a chance to string together back-to-back wins for the first time in a long time.

The last time the Canucks won two games in succession was when they beat the Chicago Blackhawks and Seattle Kraken on October 21st and 23rd.

Here’s how the Canucks lined up in the nation’s capital.

Warmup lines for the #Canucks vs. @Senators

The game started with a bang with the Canucks coming on strong and scoring just over a minute into the game.

Tanner Pearson benefited from an incredibly strong play from Conor Garland, who has without much doubt been the Canucks’ best forward this season.

Garland with the moves and the vision 👓 pic.twitter.com/Se86FFoZEX

Brady Tkachuk took an interference penalty on Quinn Hughes and the Canucks’ power play hopped over the boards for their first chance of the night.

The Canucks didn’t generate any shots on goal, and the Senators killed off the penalty.

The two teams went back and forth, not generating much, and then Alex Chiasson took a hooking penalty, and the Sens went to the power play.

Ottawa managed to convert after the Sens passed a puck right through Tucker Poolman — with former Canuck Adam Gaudette burying the opportunity.

Adam Gaudette scored a power-play goal in his Senators debut tonight. Lovely. #Blackhawks gave him away for free🤬pic.twitter.com/fNnmttGfwt

1-1 after the Gaudette goal.

Tyler Myers took a tripping penalty with roughly five minutes remaining, but thankfully, the Canucks were able to kill it off.

These two teams were tied at one apiece heading into the second.

Garland picked up his second assist of the night early in the second after pouncing on an Adam Gaudette turnover and centring the puck to Tyler Motte who made no mistake in burying the puck to give the Canucks a 2-1 lead.

Garland was buzzing all game long, and was by far the Canucks’ best forward and perhaps their best overall player tonight.

Bo Horvat took a penalty at the 6:30 mark of the second.

One minute into the penalty, Tanner Pearson took a cross-checking penalty that head coach Travis Green and Pearson vehemently disagreed with.

The Canucks killed off the Horvat penalty thanks to a massive save from Thatcher Demko, and once at 5 on 4, the Sens struggled to get set up in the offensive zone.

Garland continued his strong play, as he forced Nikita Zaitsev to take an interference penalty simply by keeping his feet moving and keeping his motor higher than anybody on the ice.

On the ensuing power play, the Canucks managed to get a solid look for Elias Pettersson to let go of a one-timer, but unfortunately, the puck whistled past the net high and wide.

The Sens managed to kill off the Zaitsev penalty and we were back to even strength with eight minutes left in the second.

The two teams went back and forth without much structure or quality chances — as can be expected by two bottom feeder teams.

Oliver Ekman-Larsson took an interference penalty with 1:57 left in the second, but almost immediately after, the Sens took a penalty to negate their power play.

We had some 4-on-4 hockey to finish the second period.

Luke Schenn scored one of the nicest goals of the Canucks’ season up to the point when he protected the puck, drove the net hard, and made Canucks fans feel better, if even just for a second.

Just a drive-by from Luke Schenn to end the second period. 🚙

3-1 Canucks heading into the third.

Justin Dowling had the best chance of the first three minutes of the period when he came in on the rush and ripped a puck off of Gustavsson’s shoulder.

Tim Stützle and Nils Höglander got tangled up in front of the Senators’ bench and were given offsetting roughing penalties.

During the ensuing 4 on 4 play, the Senators defended the way you’d expect a team with four wins on the season to and allowed Bo Horvat to walk in and rip home the Canucks fourth goal of the game.

Bo Horvat with a RIP! 🏹 pic.twitter.com/dLjwEUI1fu

Time to put him at the net front on the power play? My column, coming soon.

Artem Zub took an interference penalty and sent the Canucks back to the power play.

Once again, the Canucks managed to convert, taking a 5-1 lead after Alex Chiasson found the back of the net for his third goal of the season.

Quinn Hughes picked up his third assist of the game on Chiasson’s goal, while Miller recorded his second.

Roughly five minutes later, Brady Tkachuk scored a goal on his backhand to make it 5-2 Canucks.

Then, with four minutes to go, Zach Sanford bowled over Conor Garland after the whistle and got the only penalty on the play to send the Canucks back on the power play late.

J.T. Miller scored a beautiful goal on the ensuing power play, with the assists going to Pettersson and Hughes. 6-2 Canucks.

Mete took a slashing penalty on the play, so the Canucks’ power play personnel came right back out. They didn’t score, but it didn’t matter, because the Canucks came out with their first back-to-back win since October with a 6-2 final over the Senators.

Conor Garland was dynamite once again. His give-a-bleep meter is perhaps higher than anyone on the Canucks every single night, and tonight was yet another example of him dragging his team into the fight with him.

Quinn Hughes recorded the first four-assist night of his career, and was fantastic once again. He’s had a great bounce-back season defensively, and his offensive game hasn’t wavered in the process.

The Canucks need to play at an incredibly high pace in order to qualify for the postseason, and as Quinn Hughes told us this morning, they just have to take it one game at a time, because that’s all they can do at this point.

Nonetheless, winning this game did a lot for the Canucks’ confidence, even if it was the weakest opponent they could have asked for.

“I think they know that they’re right there, that they’ve been there,” said Green post game. “We’ve lost so many one-goal games. It’s not like they’ve just been losing and being outplayed. They’ve done a good job keeping their belief and confidence level high. To finish the trip with two wins was important for our group.”

The Canucks finished their road trip on the right note against two weak teams, and now head home for a six-game homestand. They’ll face off against the Pittsburgh Penguins on Saturday.