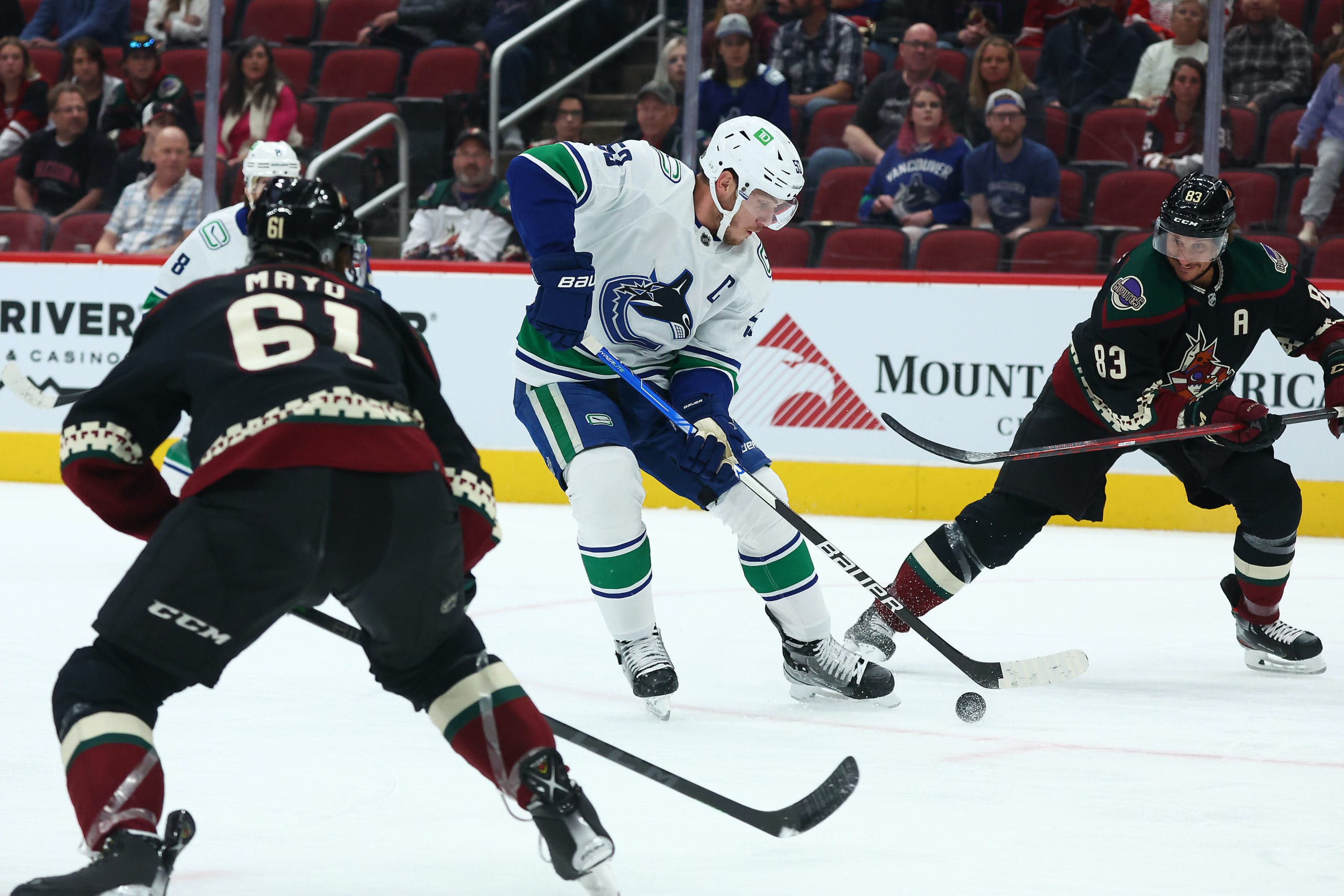 Photo credit: © Mark J. Rebilas-USA TODAY Sports
By David Quadrelli
9 months ago
Comments
Less than 24 hours after a commanding 5-1 victory over the Vegas Golden Knights in which Elias Pettersson exploded for four points, the Vancouver Canucks were back in action, this time against the Arizona Coyotes.
It was the return of Conor Garland and Oliver Ekman-Larsson to the desert, as both players were drafted by and had spent the entirety of their NHL careers with the Coyotes up until they were traded to the Canucks in the offseason.
Here’s how the Canucks lined up:

Warmup lines for the #Canucks vs. @ArizonaCoyotes

Jaroslav Halak started in goal for the Canucks with Harri Sateri opposite him.

The Canucks were given an early power play opportunity after Shayne Gostisbehere interfered with Bo Horvat.
Elias Pettersson quickly scanned the ice and snapped a can’t-miss pass to Alex Chiasson, who made no mistake beating Sateri to open the scoring. 1-0 Canucks.

Pettersson ➡️ Chiasson for a tap-in! 🤝

Chiasson then took a penalty of his own just minutes later that despite facing sustained pressure from the Coyotes, the Canucks were able to kill off.
Once the penalty expired, the Coyotes kept up the pressure, and Jaroslav Halak had to be sharp early.
Advertisement
Ad
Advertisement
Ad
And sharp he was as the Canucks gave up quality chances and made defensive gaffes early on for yet another game.
As expected, there was a tribute for Oliver Ekman-Larsson during the TV timeout:

The end of OEL’s video tribute and standing ovation during the first TV timeout #Canucks pic.twitter.com/Mtc1zzLXpT

Michael Carcone (remember him?) threw a dangerous hit on Conor Garland along the boards in the Canucks’ end, and after staying down for a few seconds, Garland was able to get back to his feet and get to the Canucks’ bench and appeared no worse for wear.
Tanner Pearson went down awkwardly and left after the first period and did not return.
The Canucks entered the second period up by a goal.

Horvat with the wrap-around 😏

And with that, Captain Horvat's on hatty watch… 👀

After giving the Coyotes all sorts of chances to stay in this game during the first period, the Canucks came out, and on the back of their captain, played the exact way they should against the league’s worst team.
“I definitely think I have a little bit more confidence,” said Horvat post game. “I think just being more confident with the puck and trusting my abilities to make plays. I mean, I’m fortunate to play with some good players out there but just trusting my skill set and definitely having confidence with the puck has definitely helped my game for sure.”
Nick Schmaltz benefited from a neutral zone turnover from Travis Dermott and a flat-footed Tyler Myers, to make it 3-1.
Then just seconds later — in Horvatian fashion, as the great Don Taylor might say — Nick Ritchie banked in a loose puck in front of Halak to make it 3-2.
Advertisement
Ad
Advertisement
Ad
The Canucks challenged the play, and it was determined that the play was offside, and just like that, it was 3-1 Canucks once again!
Travis Dermott made an exceptional stretch pass to spring Elias Pettersson on a 2-on-0 with Alex Chiasson, and the unlikely duo combined for yet another goal to make it 4-1 Canucks.

Chiasson returns the favour, setting Pettersson up during a bad Yotes line change. 😎

The Canucks headed for the final 20 minutes of play up by three.

The Canucks got an early power play attempt, and made good on it.
Oliver Ekman-Larsson got a shot through traffic that was deflected by Alex Chiasson, who recorded his second of the game to make it 5-1 Canucks.

Chiasson tips OEL's shot from the point to make it 5-1 VAN. 🥳

Without a doubt, Bo Horvat is deserving of top performer honours tonight.
Not only did he score two goals and add a helper, but the Canucks captain also went 17-for-17 in the faceoff dot, breaking his own Canucks record for most consecutive faceoff wins.
“No, I don’t think so actually,” said Horvat when asked if he’s ever had a night even close to as good as tonight in the faceoff dot. “Bruce sent me out there for the last one at the end and I didn’t want to ruin it. I figured I was around there at the end — close to perfect — and I’m happy I won that last one because Beags [Jay Beagle] is a tough opponent out there, battling with him in practice in the past…I definitely don’t think I’ve ever had 100% in the dot before so it was cool to get that.”
Advertisement
Ad
Advertisement
Ad
Horvat has also been in some elite company as of late:

The hope of playoffs among the fanbase are pretty much dead — they have been for a while now, depending on who you talk to — but tonight was a commanding win for the Canucks in which they put their foot on the gas pedal and picked up two points.
The Canucks picked up four of a possible four points on this short two-game road trip, and fans have mixed feelings.
The Canucks aren’t technically out of it yet — just ask any player or Bruce Boudreau — but it would take nothing short of a miracle — AKA teams that haven’t lost much lately losing — for the Canucks to actually squeak into the playoffs.
What’s more likely, is something that fans know all too well.
Advertisement
Ad
Advertisement
Ad
The team wins games down the stretch with playoffs out of the question and give themselves a lower first-round draft position as a result.
While that’s most likely what’s going to happen here, we’re not going to tell you how to be a fan, and we’re certainly not going to tell you not to root for Canucks victories.
The Canucks now head home for a five-game homestand that kicks off Saturday against San Jose when the Sharks will be in town.