Advertisement
Ad
CanucksArmy post game: We all need a six day break after this one 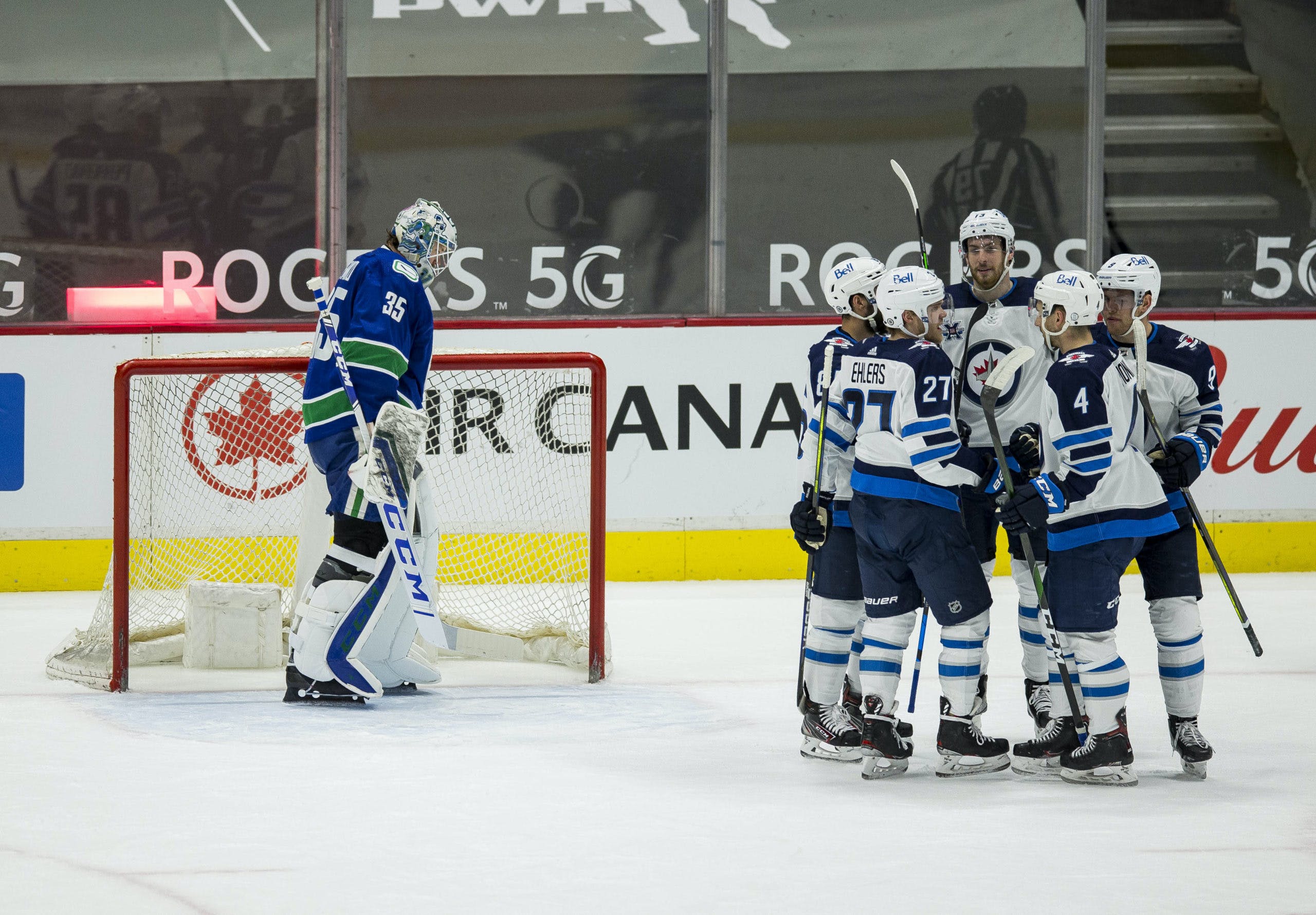 Photo credit: © Bob Frid-USA TODAY Sports
By Faber
1 year ago
Comments
You knew he’d play.
After taking a hard shot to the ankle on Monday night, Bo Horvat was back in the lineup for the Canucks on Wednesday night as they took on the Winnipeg Jets.
The Jets beat up on the Canucks in this one, putting up five goals and only allowing one in a 5-1 shellacking of the Canucks.
With Horvat in the lineup, it gave the team much better depth at centre after finishing Monday night’s game with none of their four centres from opening night. The Canucks are still without three of their centres in Elias Pettersson, Jay Beagle, and Brandon Sutter. That meant that Tyler Graovac and Adam Gaudette were the bottom-six centres for the Canucks on Wednesday night.
Here’s how the team would line up.

Advertisement
Ad
Advertisement
Ad
Thatcher Demko started in net for the Canucks while Connor Hellebuyck was between the pipes for the Jets.
Quinn Hughes continued to play with Travis Hamonic and I’ve liked what I’ve seen from Hamonic of late. The numbers in March when it comes to on-ice shooting percentage of the Hughes-Hamonic pairing are unbelievably low, currently sitting at 2.47%. Luck is bound to come this pairing’s way soon, you just can’t be this unlucky for this long.
Enough beating around the bush, it’s 7:30 and I’m more than ready to get into it.
Because I didn’t realize it was a 7:30 start…
Who cares, let’s go!

The Canucks came out with the intention of throwing as many shots on Hellebuyck as possible. Miller made some great decisions and plays in the first period to extend offensive zone time and the Canucks were having a lot of it in the opening few minutes.
Advertisement
Ad
Advertisement
Ad
The defencemen were getting plenty of shots off with the bottom-six lines on the ice. It seemed to be a crash-the-net type of game for Vancouver’s bottom-six and that is exactly what the lineup demands.
Boeser took a weak tripping call 6:42 into the period and the Jets went to work on their first power play of the game. The Canucks defencemen did an excellent job killing off the penalty as they cleared the zone with ease and limited the Jets to just one scoring chance when Kyle Connor ripped a one-timer off the crossbar.
Antoine Roussel made some great passes at even strength while playing alongside Gaudette. Roussel has proven that he can be an effective playmaker when suited up with linemates who can shoot the puck. His presence and skillset lend themselves nicely to the play of Gaudette. This could be a fourth-line option for the Canucks when Sutter returns from injury.
Advertisement
Ad
Advertisement
Ad
The Jets soared past the Canucks in the shot totals through the midway part of the period but the Canucks settled in after the penalty kill and were able to get some good shots off on Hellebuyck. They were finding space to enter the Jets’ zone and were working hard on the boards to set up good opportunities for shots from the defencemen.
With 6:52 remaining in the period, the Canucks got their first power play opportunity after the Jets took a too-many-men on the ice penalty. The Canucks were busy with the man-advantage. They looked dangerous for most of the two minutes but were unable to get a puck past Hellebuyck.

MacEwen dropped the gloves with the larger Logan Stanley and they had a spirited bout between two true heavyweights.
Advertisement
Ad
Advertisement
Ad
The fight brought us to the end of the first period. The Jets lead the Canucks in shots by a count of 12-11 but the game remained scoreless through the first 20 minutes of action.

The Canucks were pressing early on in the second period. They opened up with the first seven shots of the period in only three minutes and almost got on the board with some loose pucks hanging around the crease that they couldn’t quite get a stick on to bury.
As the play continued, the Canucks took a too-many-men on the ice penalty just 4:35 into the period. Vesey made a great play to save a goal but just seconds later, the Jets ripped a shot from the point that Andrew Copp got his stick on and redirected past Demko. 1-0 Jets.
Advertisement
Ad
Advertisement
Ad
With 11:01 remaining in the middle frame, the Canucks took another too-many-men on the ice penalty and the Jets went back to the power play, now looking to extend their lead. The Jets ended up getting another power play goal from their second unit and it came off the stick of Copp once again. 2-0 Jets.
Late in the period, we saw some shifts of the Vesey-Miller-Gaudette trio. It had been a very good game for Miller up to this point in the game. He was winning puck battles, making good decisions to set himself up to defend, and was skating with authority in the offensive zone. It could have come from his guest spot on John Scott’s podcast.
As the period was beginning to close out, Logan Stanley took a high-sticking penalty with 5:42 remaining and the Canucks went back to the power play. The Canucks had their chances. Boeser had Hellebuyck down and out but couldn’t find the open net, Höglander came close on a loose puck but the Canucks still trailed 2-0 with a few minutes remaining after the Jets killed off the penalty.
Advertisement
Ad
Advertisement
Ad
The Jets took that momentum and scored another goal to add to their lead. There was a wide-open shot from the right wing and the rebound sat outside the crease for Mark Scheifele to roof over a sprawling Demko. 3-0 Jets.
It was a busy period for shots, as each team had 17 shots but the Jets were the only squad to actually hit the scoresheet, putting up three goals in the period.

The first five minutes were tough to stay awake for and I’d bet that a majority of fans were beginning to get ready for bed with the way this game was going.
The next five minutes weren’t any better. Miller had a great chance around the crease but couldn’t get the best shot off and Hellebuyck had enough of the net covered to keep the puck out.
Advertisement
Ad
Advertisement
Ad
This game felt like it was being played on molasses instead of ice. Both teams were tired and you could see that the Canucks were ready for their six-day break that only has two practices in it:

These players deserve some time away from the rink and with the way they have played over these past two games, they look like they need it too.
Travis Green pulled his goalie with over five minutes remaining in the period and the Jets scored to make it 4-0 with 4:10 left in this lulla-pa-snooza.
They scored again, 5-0 Jets.
Nils Höglander scored with a minute left to make it 5-1. It was good for him as he battled with Josh Morrissey for a long time throughout this game and got the goal with Morrissey on the ice. The Jets defenceman was noticeably pissed off about the goal going in and let out a loud NSFW word or two that echoed throughout Rogers Arena.
Advertisement
Ad
Advertisement
Ad
The game ended even though it felt like it was over since the second period.
The final shot totals were 39 for Vancouver and 36 for Winnipeg.

I don’t know much about eyebrows but they do seem “on fleek”.

@ zack mac don't be shy drop the brow place you go to… i need to know for myself thanks pic.twitter.com/9kHup9qH6T

I just don't know how you go from having the puck like this, with the other team on a line change, to giving up a goal seconds later. pic.twitter.com/XoDFreoRkM

When in doubt, throw up a dog pic.

I don’t get the sense that #Canucks fans are having fun tonight, but on the bright side my puppy went to the groomer for the first time today and he’s a wee beastie: pic.twitter.com/NrxmiNjOT9

The upcoming six-day break: This team just needs it after being plastered in back-to-back games.

The Canucks now walk into their longest break of the season. There’s not much to add to this. They need a break.
The team will have two off days, then practice for one day and have two days off followed by one more practice day before they return to action on the 31st against the Calgary Flames.
Heck, after doing the post-game reports for the past two games, I am going to take some time off too.
See you all in a few days.