Advertisement
Ad
CanucksArmy post game: 0-for-0 is 100% as Canucks allow no goals while shorthanded and win 3-2 over Jets 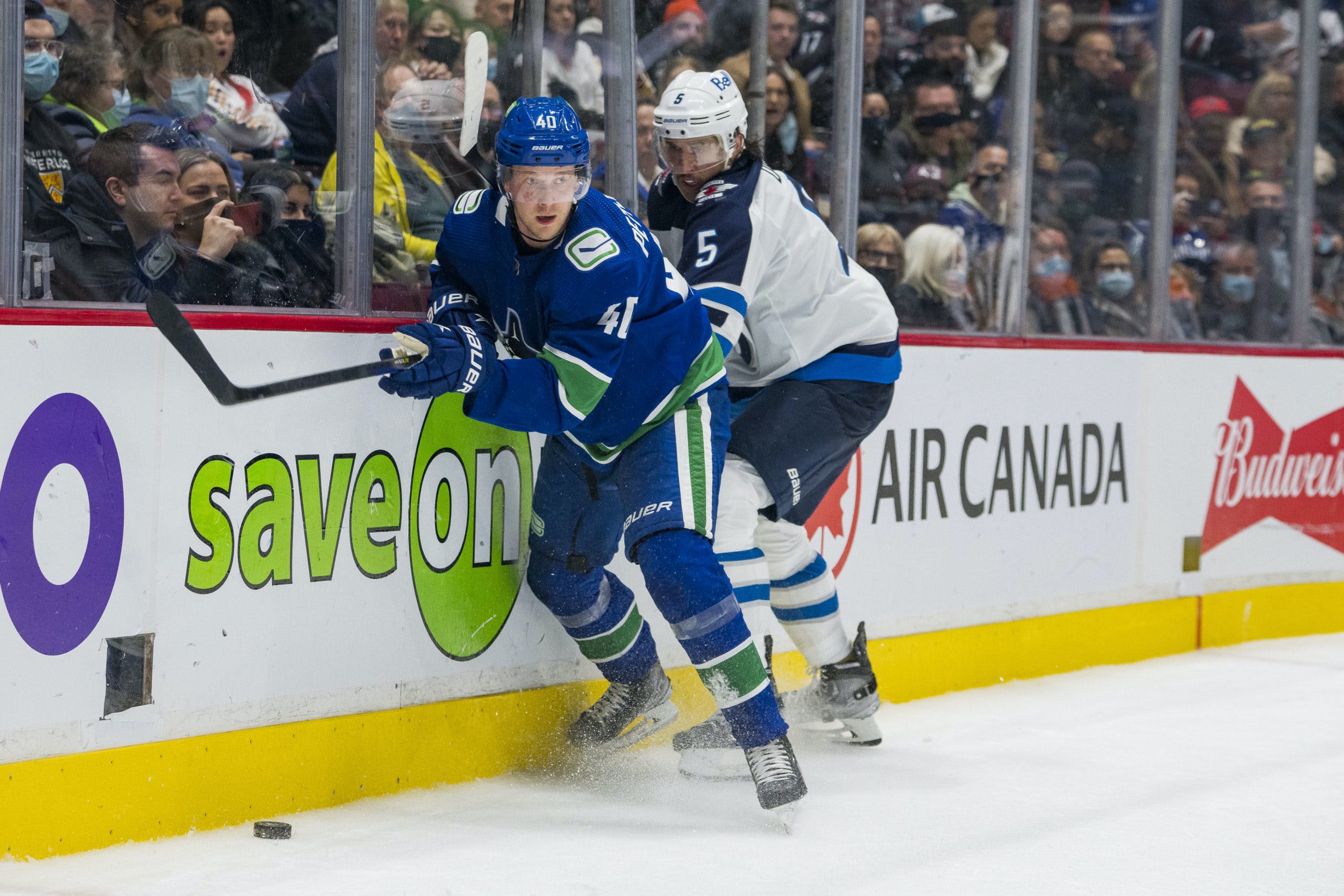 Photo credit: © Bob Frid-USA TODAY Sports
By Faber
1 year ago
Comments
The Vancouver Canucks were in for some Friday night action as the Winnipeg Jets came to town. The Jets were on the second of back-to-back games as they played in Edmonton on Thursday night. The Canucks have two wins in their last 11 games and needed to come out of this match with a win. The market wants blood and the team needed to calm them down with a win against a tired Jets team.
The lineup saw no changes from Wednesday night’s affair. There were changes to the power play unit, however. Morning skate indicated that Alex Chiasson was back on the first power play unit. Elias Pettersson, Brock Boeser, and Nils Höglander were the horizontal line through the second unit as Travis Green looked to switch things up to develop some consistent scoring on his power play units.

Warmup lines for the #Canucks vs. @NHLJets

Thatcher Demko got the start for the Canucks while Eric Comrie stood in the blue paint for the Jets after their starter Connor Hellebuyck started on Thursday night.
Everything was lining up for the Canucks to cruise to a victory with a tired team in town on the second of back-to-backs, a back-up goalie, and a team on the final game of their road trip.
Advertisement
Ad
Advertisement
Ad
That being said, there’s always a game to play. Let’s not waste any more time.
It’s time for puck drop, let’s go!

The early stages of the game saw a little bit of pressure from the Jets and a big hit on Nils Höglander by local kid Brendan Dillon that caused Höglander to reach for his face before the play was whistled down. There was no reaction from the Canucks after the hard hit on their 20-year-old.
The Canucks had a stretch of offence where Bo Horvat drove a couple of scoring chances which resulted in the Canucks taking an early lead in the shot department. The Jets battled back to take control of the shots as Demko made two big saves with 13 minutes left in the period.
Nikolaj Ehlers was left wide open in front of the net as the Canucks defended a cycle and thankfully for the Canucks, fanned on a forehand shot after struggling to handle the puck in tight.
Advertisement
Ad
Advertisement
Ad
The Canucks took another one of their famous point shots that was covered up by Comrie and a scuffle ensued after Höglander took a hit that rode up into his face. Tanner Pearson responded by getting into a scrum with Pierre-Luc Dubois. It quickly became a big shoving match and Pearson was brought down to the ice by Dubois.
The result of the skirmish was a two-minute Canucks power play.
The Canucks threw the puck around for 80 seconds, and then the second unit eventually got set up. Oliver Ekman-Larsson fired one past Comrie after some catch between him, Pettersson, and Boeser. The arena was screaming for the unit to shoot and when it happened, it gave the Canucks a one-goal lead. 1-0 Canucks with 6:09 to go.

Ekman-Larsson, with the flick of his wrist, opens scoring! 👌

Vasily Podkolzin and Pettersson drew assists on the OEL power play goal.
Advertisement
Ad
Advertisement
Ad
After the goal, the Jets began to pour on the pressure but Demko stood tall as he had made 16 saves in the opening period.
Juho Lammikko ran Comrie as he drove the net and two Jets players rushed to the defence of their sprawled goaltender. No penalties were assessed on the play as we found ourselves in the final minute of the period.

The Canucks’ power play had a balanced look for personnel and it paid off for them as the second unit controlled the puck for a long time before getting a point shot off from OEL that beat Comrie. Podkolzin jumped on the second unit in place of Pearson, who was in the penalty box at the time. Podkolzin did a good job retrieving the puck and continuing the passing plays as the net-front presence. He drew an assist on the goal as he screened the goaltender for it as well.
Advertisement
Ad
Advertisement
Ad
The Jets controlled the pace of play at five-on-five throughout the period. The Canucks had only five scoring chances at five-on-five compared to the Jets’ 12. Demko was a big reason why the game was not tied or worse, but the Canucks clutched up on their power play attempts and that was good enough to skate off the ice with a one-goal lead after 20 minutes.

The Canucks came out of the intermission with some pep in their step. They had a long possession in the offensive zone that saw them forecheck hard behind the net and win a pair of 50-50 board battles to maintain control of the puck. They had bodies in front of Comrie when Kyle “slay the dragon” Burroughs fired a point shot right through the Jets’ backstop to give the Canucks a two-goal lead. 2-0 on Burroughs’ first career NHL goal.
Advertisement
Ad
Advertisement
Ad

Kyle Burroughs snags goal #1️⃣ in the NHL as a Vancouver Canuck! 💙💚

The Jets came right back with a goal of their own. Ehlers fired a wrist shot that beat Demko with Quinn Hughes draped all over him in the slot. The goal cut the Canucks’ lead to one. 2-1 Canucks after the Ehlers goal.
Right after the goal, OEL took a stick to the face and sent the Canucks to another power play. The second unit began the man-advantage and wasn’t able to amount much pressure aside from a strong Pettersson wrist-shot. The first unit came out and Alex Chiasson made a no-look pass that went directly to Conor Garland who took two steps in and hammered a slap shot past Comrie. 3-1 Canucks.

Horvat and Pearson had a two-on-one with Horvat making the pass from right to left, where Pearson couldn’t hit the net on his quick release from a tough angle.
Advertisement
Ad
Advertisement
Ad
The Canucks had a strong pushback at five-on-five in the first half of the second period. They had a few scoring chances of their own but were still out-chanced by the Jets through 11 minutes of play in the period.
The Canucks generated some quality chances as the period drew on, and held onto their lead heading into the third period.

The power play converting was certainly a sight for sore eyes. The Canucks simply need their power play to be potent in order to stay in games, and that was certainly true tonight.
The 5-on-5 play was better, but Thatcher Demko had to be sharp in order to keep the Canucks in this period after Winnipeg came on strong.
Overall, it was a solid second period for the Canucks, who entered the third with a 3-1 lead.
Advertisement
Ad
Advertisement
Ad

The Canucks created a quality scoring chance early from the trio of J.T. Miller, Garland, and Podkolzin. Podkolzin found Garland with a perfect saucer pass into the slot and Garland ripped it into Comrie early in the period.
When the game became a bit slow, the crowd got into it with a wave that lasted a while and multiple chants to fire up the Canucks. It was a very different vibe from Wednesday night as the Canucks held tight on their two-goal lead.
Pettersson drew a penalty when Logan Stanley stepped up and threw a questionable hit on Petterson as he came down the wing in chase of the puck. It gave the Canucks a power play with 11:16 remaining in the period.
The Jets killed off the penalty and looked to make a push as they trailed by two with 8:51 remaining in the third period.
Advertisement
Ad
Advertisement
Ad
Each of Lammikko, Chiasson, and Höglander were stapled to the bench in the period as Motte went up to play with Horvat and Pearson. Chiasson ran the bench door for the entirety of the period.
The period just saw seconds fade into minutes that rolled into commercial breaks as the Canucks were content playing number munchers with the 1,200 seconds of the period.
The Jets didn’t feel like playing the 1990’s mathematics game. Instead, they pulled their goalie and got themselves within one goal when Dubois received a pass on the doorstep and got it past Demko to bring the Jets within one. 3-2 Canucks after the Dubois goal.
Though the Jets made a late push and had a mad scramble with some scoring chances, they were unable to get the tieing goal past Demko and the Canucks walked away with the win. 3-2 Final.
Advertisement
Ad
Advertisement
Ad

It is another easy decision to make Thatcher Demko the top performer of the game. He was tested for 38 shots on Friday night and held strong throughout, only allowing two goals on the night. He stopped all 28 of the mid and low danger shots that he faced on the night. Demko’s dominance began early, he made some big saves to keep the game close in the first period and rode the wave through to the final horn. Demko added to his goals saved above-average numbers for the season as he saved 0.54 more goals than expected on the night.
A couple of honourable mentions for top performers will be J.T. Miller and Bo Horvat’s faceoff excellence. The duo combined to win 29 of the 37 faceoffs that they took and both played crucial roles late in the game when the team was looking to put a cherry on top of a clean win.
Advertisement
Ad
Advertisement
Ad

The Canucks proved that when their special teams’ units can come out on top, they can win games even if they are outplayed at even strength. The Canucks didn’t give up a power play goal against on Friday night, they also didn’t give the Jets a single power play opportunity.
It seems like they have fixed the penalty kill.

“Penalty kill was 100%, so that was good,” says #Canucks goaltender Thatcher Demko with a laugh when asked what he liked from the guys in front of him tonight.

Jokes aside, the Canucks did what they had to do to win the game. The Jets outplayed them at five-on-five but the Canucks came through on the power play. The way that the Canucks won this game is my three-step plan of how they can win games throughout the season.
Step 1: Get a goal or two on the power play.
Step 2: Don’t get buried at five-on-five or give up two power play goals against.
Advertisement
Ad
Advertisement
Ad
Step 3: Thatcher Demko does Thatcher Demko things.
In 53 minutes of five-on-five action, the Jets had 65% of the scoring chances. They had 28 scoring chances on Demko compared to the Canucks putting up 15 on Comrie. Demko was once again a difference-maker in this game and took another step towards hopefully becoming USA’s goaltender for the Olympics.
The Canucks will need to clean up a lot of their five-on-five play to get on a run but the first step of a winning streak is getting the first win. After going 2-8-1 in their past 11 games, the Canucks needed this one.
They will look to build on Friday night’s win when the Chicago Blackhawks come to town on Sunday to wrap up the homestand before hitting the road for a five-game trip.
Advertisement
Ad
Advertisement
Ad
Note the 5 PM start for Sunday’s game. You can also catch David Quadrelli and me on Sportsnet 650 for the pregame show from 1-4 PM!