Advertisement
Ad
Canucks: Justin Bailey’s shoulder was bothering him for years. Now it’s healed, and he’s got his eyes on the NHL 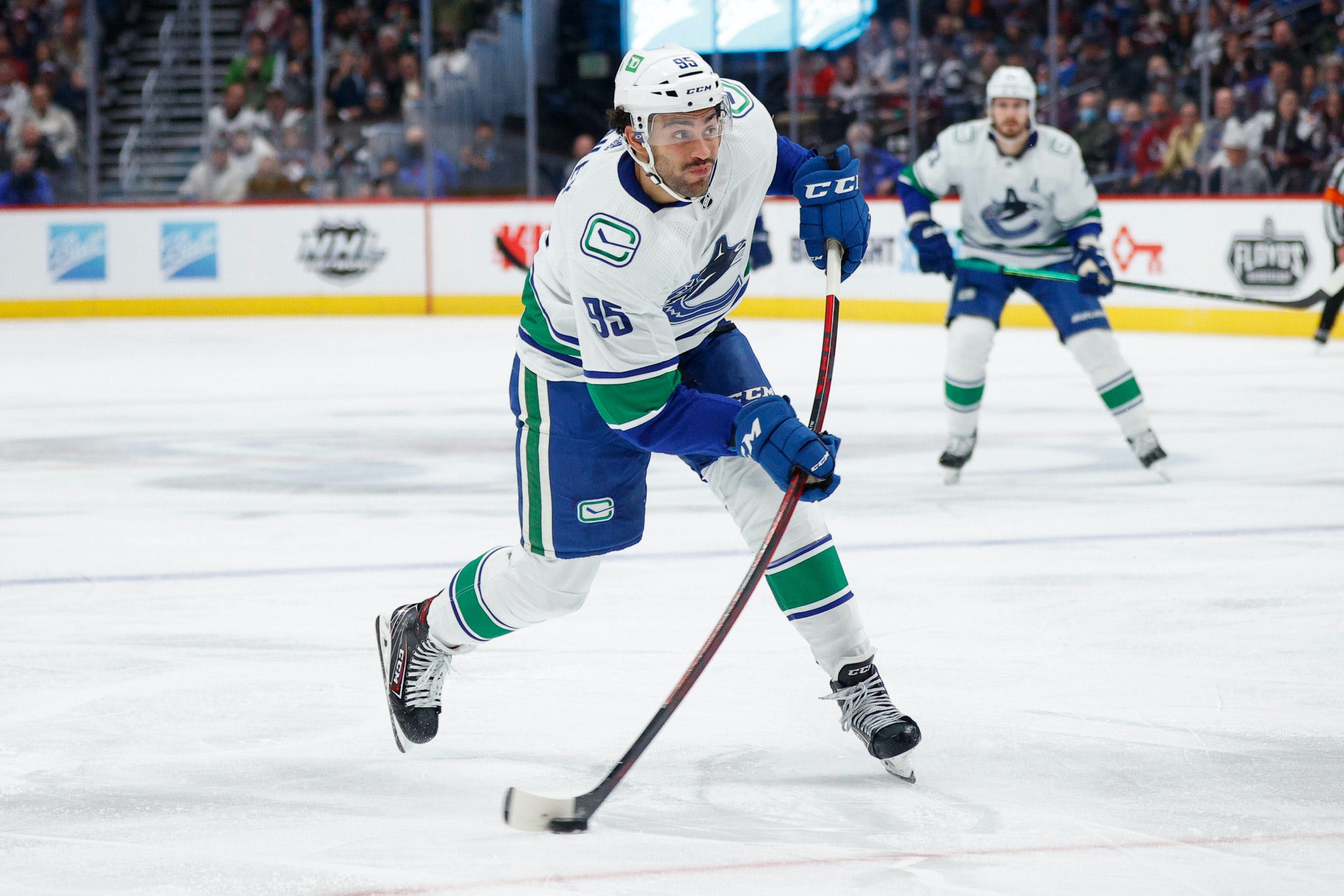 Photo credit: Isaiah J. Downing-USA TODAY Sports
By Faber
1 year ago
Comments
Speed is as good as gold in the NHL.
With every second that passes, the sport of hockey gets faster.
That’s good news for Abbotsford Canucks’ winger Justin Bailey — as he is currently one of the fastest players in the AHL.
Now in his third season with the Vancouver Canucks’ organization, Bailey is learning what he needs to do to carve out a spot as a regular NHL player with the Canucks. Bailey is an elite AHL winger. He is faster than anyone on the ice in the AHL but needed to add more to his game than just being fast to stick in the NHL.
The conversations between Bailey and the NHL club have been clear.
He needs to become a penalty killer.
It’s something that Bailey is working on because he has not done it consistently before. As a 26-year-old with NHL talent, he knows that his game needs to adjust because what he’s been doing so far hasn’t given him a consistent spot in the NHL through his six-year pro career.
Advertisement
Ad
Advertisement
Ad
“Travis [Green] told me that he liked my style of play,” said Bailey. “Greener told me they need penalty killers up there and he told me that he knows I don’t kill penalties. So he told me to go down to Abbotsford and work on it. I came to Abbotsford and for four or five games, I thought I penalty killed well. Then I got the call up to them and it was funny, my first shift in NHL this season came on the penalty kill.”
Though it is a new tool on his hockey player belt, Bailey is all in on what becoming a penalty killer can do for his chances of being an everyday NHL player.
“When you get to my age (26), people have an opinion of where you fit in on their team,” said Bailey. “With Vancouver, I seem to fit in in that third or fourth line role, and with that comes penalty killing time. It’s something that I didn’t do a lot early in my pro career but now I’m just trying to find a niche so that I can stick in Vancouver as long as I can.”
Advertisement
Ad
Advertisement
Ad
It’s a long road to become a penalty killer but Bailey’s speed and tenacity on pucks show potential to become a quality penalty killer if he puts in the work on and off the ice.

Justin Bailey intercepts and gets strung by Porter for the short-handed goal and his first mark of the playoff year. #Sabres pic.twitter.com/f9JiuL7jSv

“Right now, it’s something that I’m still working on,” said Bailey when asked about his confidence in his penalty-killing ability. “There’s always stuff to work on, like from an in-zone standpoint, there’s stick placement, routes to zones, routes to pucks — just where to be and where to go. The part I feel good about is the up-ice pressure. When I get to use my speed, my size, and my reach. I understand what’s annoying from penalty killers — I’ve always been a power play guy down in the AHL. It is so annoying when a guy comes out at you hard on the PK and that’s something that I’ve been trying to do more of when I’m penalty killing.”
Advertisement
Ad
Advertisement
Ad
Earlier this season, Bailey was given a 10-game run with the Vancouver Canucks in the NHL. He was unable to put a point up in his stint but felt good about some of the other things he was doing on the ice.
“When you’re in a fourth-line role, it’s a little bit more black and white,” said Bailey. “You have got to make sure you’re doing the little things right. You need to guarantee the coach that you will work hard on the wall, back-check hard, forecheck hard — all those little things. For me, giving effort like that comes easy. I love to forecheck and work hard. I thought I did some good things up there. I’m hoping that I get back there sooner rather than later.”
Aside from adding penalty killing to his game, Bailey looks to be more physical this season. He is throwing more big hits and using his speed and size to engage with force when heading towards a board battle. Bailey is 6’4″ and over 210 pounds and he is beginning to play like it. His season was ended early last season after sustaining a shoulder injury that led to surgery.
Advertisement
Ad
Advertisement
Ad

Great job by the official to watch Lucic board Justin Bailey mere feet away and not call a penalty. Now Bailey is injured and won't return https://t.co/ZhZadpxNQ4 pic.twitter.com/9ZWkxQE11R

This shoulder was bugging him for a long time in the early stages of his pro career. The surgery that he had done in New York last year was needed and he finally went for it after his shoulder popped out in a February game against the Calgary Flames. Bailey had a problem with his shoulder for two or three years where it popped out and he would have to deal with severe pain just to get back in the lineup after taking time off to recover. After his shoulder came out in February of 2021, he was advised to get the surgery done and he would not have to worry about this same injury sidelining his career.
Advertisement
Ad
Advertisement
Ad
“The last few years I had a shoulder that was unstable but I still tried to add physicality when I could,” said Bailey. “Now, for the first time in years, my shoulder is starting to feel 100%. It’s been eight months since the surgery and now, being more physical is definitely something I’m confident I can do more of.”
The last shoulder injury came as a blessing in disguise for Bailey. He was able to take an ample amount of time to rehab and recover for this season. He was confident about coming into training camp and making a serious case to make the NHL team out of camp. This was unfortunately derailed due to the COVID situation that he had when attempting to cross the border.
“I had that shoulder problem for like two to three years,” said Bailey. “I was told that I needed surgery the next time it came out. Last year was bad timing because I felt like could have played a lot of games for the Vancouver Canucks but it was also good timing in the sense that, I was able to get rehabbing in June and then be 100% for this season. My shoulder is great now, it’s not going anywhere. It’s a complete afterthought at this point.”
Advertisement
Ad
Advertisement
Ad

Justin Bailey's 100th career AHL goal and the first home goal in the history of the #AbbotsfordCanucks.@JamesCybulski on the call 🎙️ pic.twitter.com/DPtCUjSAdB

Bailey has so many NHL quality skills but has been unable to put them all together in the first six years of his career. This season, he is finally fully healthy, committed to becoming a penalty killer, and is on the coach’s radar.
After signing with the Canucks organization in 2019, Bailey had hopes of becoming an everyday NHLer. He is now just one step away and knows what he needs to do to make it happen.
For now, he will continue to work on his penalty killing in the AHL, while blowing by minor league defencemen with ease thanks to his NHL-calibre wheels.
Advertisement
Ad
Advertisement
Ad