Advertisement
Ad
Canucks game day: Boudreau on what Höglander needs to do to improve, and Horvat on the black skate jersey game vs. Flames 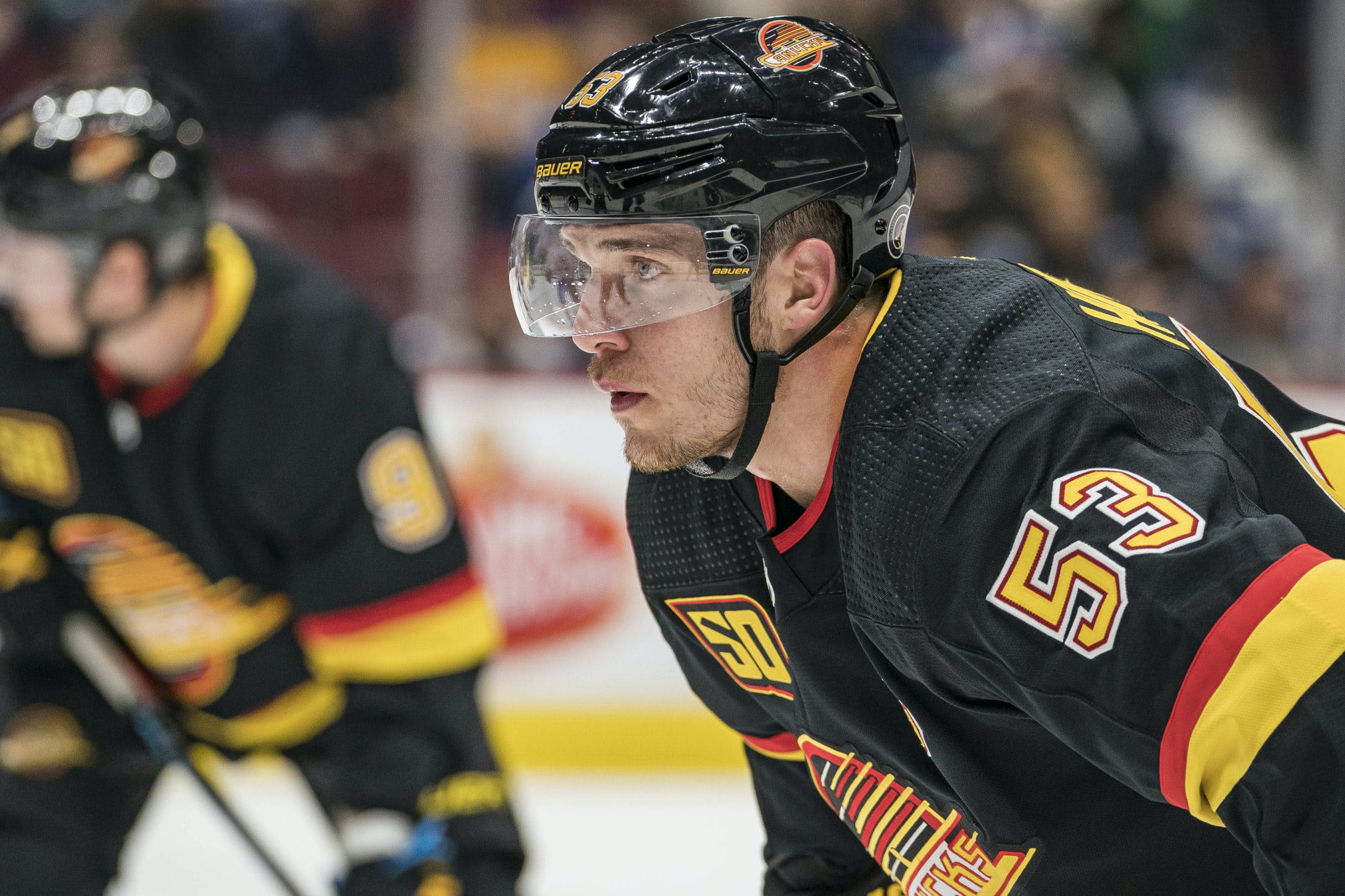 Photo credit: Bob Frid-USA TODAY Sports
By David Quadrelli
11 months ago
Comments
The day is finally here. By now, you’ve already seen the photo of Kirk McLean posing with Thatcher Demko in his iconic McLean-inspired CCM setup.
If you haven’t yet, stop what you’re doing and click here (be sure to come back for the rest of our gameday preview, of course).
The Calgary Flames are in town, there’s snow on the ground, and the black skate jerseys are making their much anticipated — and only — appearance of the season tonight.
The Flames have won ten straight and are the hottest team in the NHL right now. They’ve got three lines that can make opposing teams pay at any given time.
Tonight will be a big test for the Canucks, who really can’t afford to lose many more games this season if they want to stay in the playoff hunt.

Today was an optional skate at Rogers Arena, with 16 skaters on the ice, and no Bruce Boudreau.
Advertisement
Ad
Advertisement
Ad
As far as we know, the Canucks will go with the same lineup that they used in line rushes when they practiced yesterday, which looked like this:

First time through line rushes at #Canucks practice on Wednesday, Vancouver lined up as follows:

Thatcher Demko starts in goal, with Jacob Markstrom opposite him in his first start in front of fans at Rogers Arena since he signed with the Flames.
On the topic of lineups… check out what the Flames are going to send out tonight:

That forward group is deep, folks.

Bo Horvat loves the black skate jersey, and certainly isn’t worried about getting penalized more because of the colour of the jersey he’s wearing.
“Apparently, my last couple games here, I can’t seem to stay out of the box for some reason, I don’t know what’s going on,” said Horvat with a laugh when told that studies have shown teams that wear black get penalized more. “I haven’t looked into that too much. Clearly, I’m taking penalties in my blue jersey too, so it doesn’t matter.”
Advertisement
Ad
Advertisement
Ad
In all seriousness, Horvat knows tonight will be a tight-checking game with some familiar faces in the lineup.
“We know what kind of defensive team these guys are and I think they’ve probably allowed the least amount of goals the NHL. For us, I think it’s playing kind of similar to them, playing well defensively, trying to crack them instead of them cracking us, so I think that’ll be a huge part of tonight’s game.”
Horvat added that he thinks Tanev and Markstrom deserve a warm welcome and maybe even a standing ovation from the Rogers Arena faithful tonight.
Bruce Boudreau knows all about Daryl Sutter-coached teams and what they’re capable of.
“I’ve known Daryl for a long time and played against him and coached against him for a long time. So I mean, any team he has, I’m very aware of how hard they’re going to play and how structured they’re going to play — how they’re going to come out in the first period. And so it doesn’t surprise me that they’ve won a lot of games in a row, whether it’s 10, or whatever number it ends up at — hopefully it ends at 10.”
Advertisement
Ad
Advertisement
Ad
Boudreau also spoke at length about what Nils Höglander needs to improve on in order to find continued success at the NHL level.

“I just think he has to play the 200-foot game,” said Boudreau. “It’s not all about goal scoring in the NHL. Young guys come in and they have a little bit of success, and unless he becomes a 40 goal scorer where he can sit around the red line and try to make fancy plays… But here’s a guy that, you know, he got 13 goals last year, but in the bubble league [Canadian Division games only], I think it’s a lot different now that everybody’s playing 82 games, and I don’t think he’s catching people by surprise. He’s had opportunities to score a lot of goals — probably a scoring chance every game — he’s just not putting them in. I think once he starts putting them in, his confidence will grow in that area. Again, you saw it when Podkolzin scored the other day. His reaction was like, ‘Oh my goodness I finally scored the world is okay again’, and I think Hoggy would be the same way. I think he’s pressing a little bit too hard right now, but I’m always telling him it’s not about the goalscoring, that they will come because you’re a skilled player, worry about the other parts of your game, and when the goalscoring comes and you have the other parts of your game, then you’ll be an awful lot better player.”

Puck drop is at 7 PM tonight from Rogers Arena.