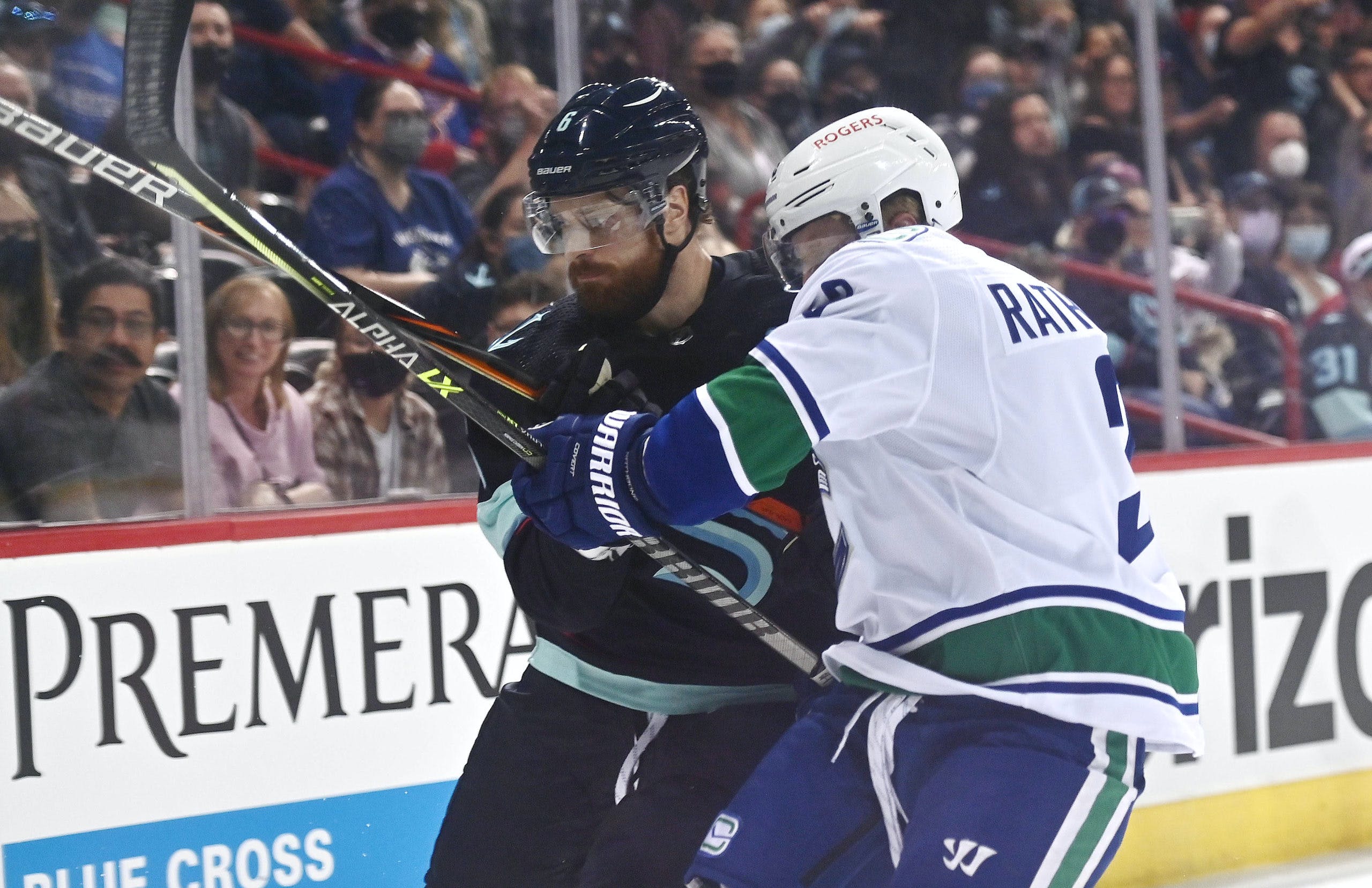 Photo credit: © James Snook-USA TODAY Sports
By David Quadrelli
1 year ago
Comments
It’s been far too long, but we finally had a Canucks game to watch tonight.
The only issue was, not everyone was able to watch it. Regardless of if you watched the game or not, we’ve got you covered.
Let’s do this.

Lines for the #Canucks against #SeaKraken tonight in Spokane

The Canucks’ lineup suggests a couple of things about tomorrow night’s game in Abbotsford.
For starters, the Conor Garland – J.T. Miller – Vasily Podkolzin line will likely form Vancouver’s top line with Bo Horvat’s line featuring Zack MacEwen and Tanner Pearson on the wings forming the other top six line.
We’ll also likely see Oliver Ekman-Larsson and Tucker Poolman paired together as the Canucks’ first defence pairing.
Advertisement
Ad
Advertisement
Ad
It’s safe to assume we’ll see at least Thatcher Demko, Jaroslav Halak, and/or Michael DiPietro see some time in the crease tomorrow.
But that’s tomorrow. There was an NHL game tonight, and it was the first game in the history of the Seattle Kraken.
The first installment of the Battle of the Border took place tonight! Here’s what went down.

The game began with a barrage of Kraken chances on 20-year-old goaltender Arturs Silovs. If you recall, we wrote an article in August titled “Why you should be higher on Arturs Silovs”.
Those that either didn’t believe it or needed to see it with their own eyes got to see a glimpse of why the Canucks are so high on the young Latvian netminder.
Early on, Silovs was up to the task, showing exceptional athleticism and showing off his strong ability to seal off the bottom of the net with ease.
Advertisement
Ad
Advertisement
Ad
The low saves are his bread and butter, and although there was one that squeaked through and nearly found the back of the net early on, Silovs’ was as good as advertised tonight, if not better.
The Kraken got the first man advantage of the game after an errant pass from Luke Schenn put Jack Rathbone in all kinds of trouble in the defensive zone. Rathbone took a tripping penalty and the Canucks’ penalty killers hopped over the boards.
Phil Di Giuseppe, who looked solid at training camp in Abbotsford, continued his strong play and was one of the Canucks’ most used penalty-killing forwards tonight.
The Canucks killed off the Rathbone penalty and luckily for them — and for Rathbone — the puck found its way to the neutral zone just as Rathbone was exiting the penalty box.
Advertisement
Ad
Advertisement
Ad
With his skating ability and overall offensive instincts, you just knew he wasn’t going to miss.

That wrister 🔥 Rathbone's goal that put the good guys up 1-0. pic.twitter.com/ePVu1GQSoS

1-0 Canucks off of Rathbone’s goal.
It wasn’t all sunshine and rainbows for Rathbone, however, and we’d be remiss if we didn’t mention that he was knocked off the puck a couple of times and wasn’t great in the defensive zone to start the first period.
He’s dynamic, but it’s no secret that the only thing holding him back from being a bonafide top four NHL defenceman is his defensive capabilities. Thankfully for the Canucks, he’s still young and is hungry to improve that part of his game.
And in the meantime, he’s going to do things like this:
Advertisement
Ad
Advertisement
Ad

Rathbone doesn't do the fake clapper, but he wheels down the line for a setup then QUICKLY retreats to the d-zone for a reset. Gotta love this kids skating#Canucks
/9 pic.twitter.com/fFgeUVJrec

The Flow. @BBoeser16's powerplay goal that put us up 2-0. pic.twitter.com/oYsd8K5OI0

2-0 Canucks after Rathbone’s fake clapper sets up a Brock Boeser one-timer.
Seattle put on some more pressure late, but Silovs was up to the task.
With 42.6 seconds remaining in the first period, Olli Juolevi took a tripping penalty and sent the Kraken to their second power play of the night.
The Canucks escaped the period unscathed and with Silovs’ shutout still in tact.

The Kraken began the second period with the man advantage and managed to convert. Mark down Riley Sheahan as the first player in Seattle Kraken history to ever score a goal for the club. 2-1 Canucks.
Advertisement
Ad
Advertisement
Ad
The two sides went back and forth before Jason Dickinson took a cross-checking penalty with 12:48 to go in the second frame to send Seattle back to the power play.
The league recently announced they want to crack down on cross-checking, so this will be something to keep an eye on going forward.
The Kraken managed to capitalize on the ensuing man advantage, with former Canuck Jared McCann wiring home a wrister over the right shoulder of Arturs Silovs. 2-2.

Shortly after the goal, Madison Bowey took a penalty after sending Mason Appleton into the boards.
This time, it was Ryan Donato who scored for the Kraken, making it 3-2 Seattle.
Advertisement
Ad
Advertisement
Ad
The Canucks didn’t have all their penalty killing personnel available tonight, and with the full scope of Brandon Sutter and Tyler Motte’s injuries not yet fully clear, they may not have their ideal penalty killing forwards out for opening night of the season, either.
This is an are the Canucks definitely want to clean up moving forward.
“We’ll go back and watch the tape,” said head coach Travis Green. “We got some guys playing probably a little bit higher than where they normally would be. We had some guys on the PK that may not play normally on the penalty kill. That was obviously one area of the game when we weren’t very strong.”
The Canucks answered back quickly, however, and it was the Kraken slayer Kyle Burroughs who fired a shot through traffic before Nils Höglander neatly deflected the puck past Chris Driedger to make it 3-3.
Advertisement
Ad
Advertisement
Ad

Nils Höglander with a suss high tip on a Kyle Burroughs point shot to tie things up at three!

Spencer Martin was in goal to start the third, and was welcomed to the Canucks in a less-than-ideal fashion.
But before we get to that, let’s talk about Olli Juolevi.
It’s no secret that Juolevi didn’t do himself any favours with his performance at training camp. In fact, Travis Green said as much when he was asked about Juolevi’s weekend in Abbotsford.
We’re not here to tell you he was great tonight. In fact, he was probably the fourth or fifth best defenceman the Canucks had tonight — but he made a smart play here to prevent a goal:
Advertisement
Ad
Advertisement
Ad

Höglander with an incredibly dumb pass through center. Juolevi with a great sliding play to prevent the Kraken from capitalizing#Canucks
/16 pic.twitter.com/qYBWAdPsNl

Shortly after this play,
Jason Dickinson won the puck back on a draw at the defensive zone faceoff dot to Spencer Martin’s right. The only trouble was, neither Martin nor Juolevi could react in time to stop the puck from finding its way to the back of the Canucks’ net. 4-3 Kraken.
Now back to more Jack Rathbone coverage. One thing he said he worked on this offseason and wants to continue to improve on is his gap control. In theory, Rathbone’s skating ability should allow him to take risks and go for pucks that most defencemen would shy away from when defending. This is an example of him doing that well:
Advertisement
Ad
Advertisement
Ad

“I thought Rathbone was good tonight,” said coach Green. “He had a good night, a good game. I liked how active he was. He was strong, he tried to defend, there were a lot of things that he did… He had a good game.”
With 7:17 remaining in the third, Danila Klimovich took a hooking penalty and sent the Kraken back to the man advantage.
And, to the surprise of literally no one, Seattle converted once again.
It was Morgan Geekie once again, who potted his second goal of the night to make it 5-3 Kraken.
This would hold up as the final score.

Just when you thought we were done, the players stayed out because preseason games, win or lose, are going to feature SHOOTOUTS, ’cause why not?
Advertisement
Ad
Advertisement
Ad
After Höglander, Boeser, Petan, and Klimovich all failed to convert for the Canucks, it was Jack Rathbone who hopped over the boards as the team’s fifth shooter and won the meaningless shootout for the Canucks.

Jack Rathbone literally did *everything* to try carry the Canucks tonight. The shootout goal was meaningless since they already lost..but this was a massive statement game from #3#canucks
/21 pic.twitter.com/pO0TxiWcbP

Spencer Martin stopped every shot he faced on the shootout.

Brad Hunt was solid. As great as it was to see Rathbone perform well tonight, Hunt has quietly been one of the best defencemen for the Canucks through training camp and certainly tonight. He reminds me of Alex Biega in that he’s not overly flashy, but can skate, move the puck well, and is competent in his own zone with or without the puck on his stick.
Advertisement
Ad
Advertisement
Ad
Phil Di Giuseppe had a great start to his preseason tonight. He was involved all over the ice, and as we mentioned above, was likely the Canucks’ most used penalty-killing forward. He caught everyone’s attention at camp and has quickly moved himself at the forefront of the conversation of who deserves a spot in the Canucks’ bottom six.
Danila Klimovich certainly needs some more time before he’s NHL ready, but he stood out in a positive way tonight. His hands look like they’re NHL ready, and anytime he had the puck on his stick tonight, he looked dangerous.
The Canucks will be back in action tomorrow night and we will be in the building at the Abbotsford Centre tomorrow ready to bring you instant analysis from the tilt against the Calgary Flames. Puck drop is at 7 PM and you can catch that game on canucks.com.
Advertisement
Ad
Advertisement
Ad