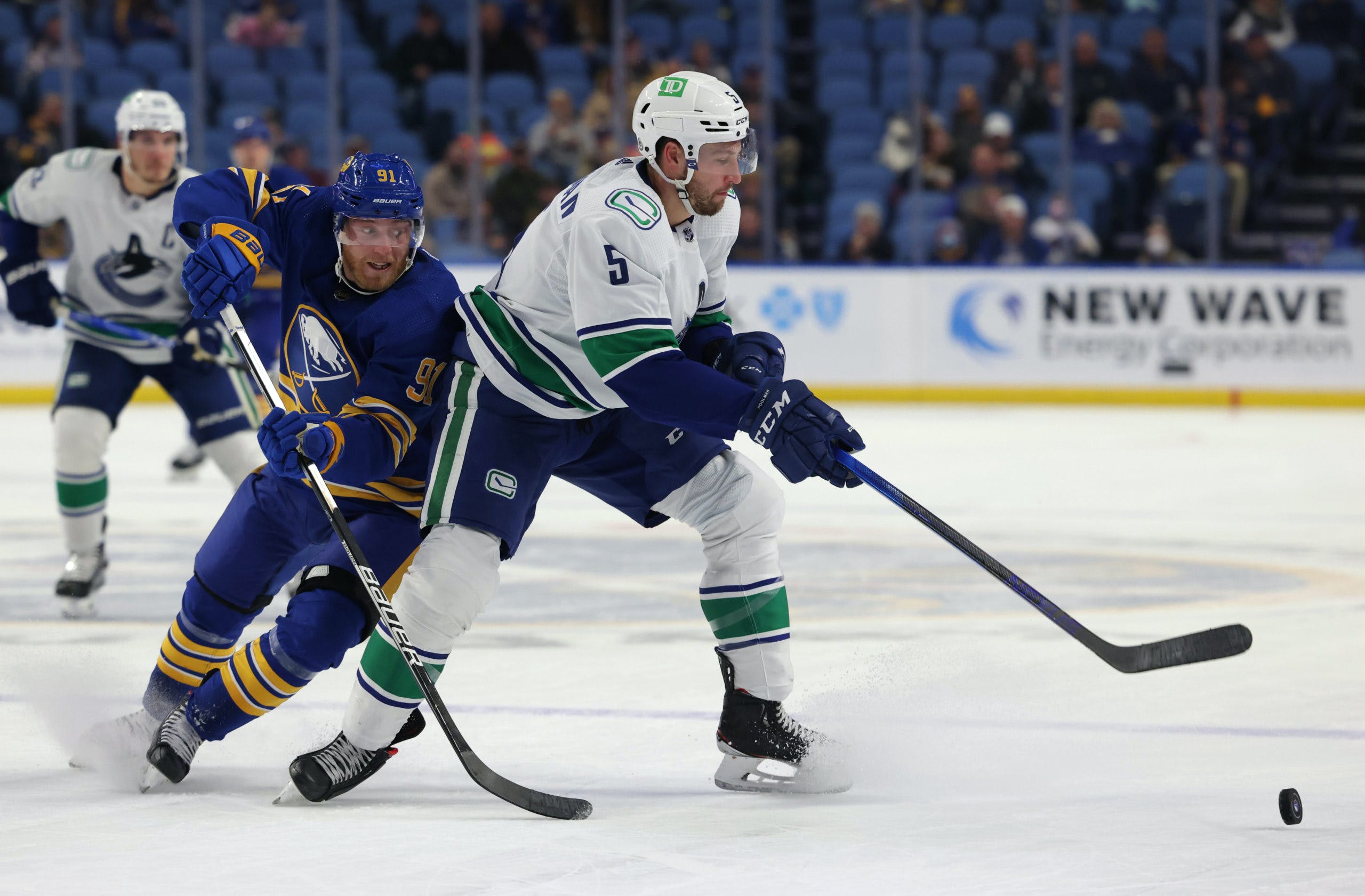 Photo credit: © Timothy T. Ludwig-USA TODAY Sports
By Faber
1 year ago
Comments
We may end up seeing Tucker Poolman as a healthy scratch not even halfway through the first year of a four-year, 10 million dollar contract.
Early in his Canucks career, it’s safe to say that Poolman has not come as advertised. At the time of the signing, Jim Benning said, “losing Chris Tanev hurt us,” and that “we think Tucker Poolman has some of that in him.”
Poolman was expected to come in and play with one of Quinn Hughes or Oliver Ekman-Larsson and be the defensive piece that allows his more offensive partner to shine. Unfortunately for Poolman, he has been outplayed by Tyler Myers, Luke Schenn and — when healthy and available — Travis Hamonic.
Puck possession and zone exits have been a struggle for Poolman this season. He seems fine when defending in his own end and is an above-average skater as well. The big problem in Poolman’s game is when the puck is on his stick. After a few decent games to start the season, it felt like opposing teams took notice of this weakness as well, and began to take advantage of it.
Advertisement
Ad
Advertisement
Ad

The accumulation of Tucker Poolman puck handling errors that just absolutely kill the #Canucks is really something.

Wherein a poorly timed, but relatively straightforward drop pass goes awry, causing 4 #Canucks to get caught up ice as the Penguins ice the game. pic.twitter.com/UBEMgQNZHa

When playing with Hughes or OEL, we have seen a drastic drop in numbers for those players. Poolman’s presence has dropped Hughes and OEL’s Corsi, goals for, and expected goals for — all while the pairings receive a 0.944 and 0.975 save percentage at five-on-five.
Hughes sees a massive bump when playing with Luke Schenn as that pairing’s Corsi currently sits at 54.6%. Their goals for is at 66.7% and their expected goals for holds at 55.5% in 108 minutes of five-on-five play. The only better defence partner for Hughes this season has been Myers, who is putting up respectable numbers in his 290 minutes with OEL.
The return of Travis Hamonic is going to raise questions of if Poolman stays in the lineup or if he is sent to the press box. We have not seen a lot of Hamonic or Poolman on the left side and the Canucks have proven to be content playing Kyle Burroughs on the left side this season. Burroughs has been one of the only defence partners where Poolman has shown well in possession numbers. This is likely due to the quality of competition dropping when Poolman plays on a third pairing and if that is working for him and the team, then so be it.
Advertisement
Ad
Advertisement
Ad
As a 12-year veteran in Hamonic returns to the lineup, Poolman may find himself on the outside looking in. When Hamonic is playing on a third-pairing with Burroughs, the duo holds a 60% Corsi in their 22 minutes of five-on-five ice time together.
Hamonic could slide to the left side to play with Poolman, as Hamonic has played some left-side this season. He was used as a left-side defenceman in Abbotsford in his short stint at the beginning of December. It just seems like Kyle Burroughs has been working fine on his off-side and head coach Bruce Boudreau also has Brad Hunt on the roster. As the season progresses, it becomes more of an uphill battle for Poolman to get ice time if there aren’t many injuries to the defence and COVID stays away from the team.
Advertisement
Ad
Advertisement
Ad
On top of all of this, Jack Rathbone is sitting down in Abbotsford and after some rehab games where he gets a boatload of minutes, he should fit right into Boudreau’s fast-paced coaching style. As the calendar switches over, this is how I would rank the defence core.
Poolman is an NHL defenceman but the Canucks simply have better bottom-pairing options on their roster.
The unfortunate circumstance of Poolman making $2,500,000 for the next four years puts the Canucks’ cap in a wretched pretzel. You don’t want your seventh defenceman making two and a half million dollars but when that two and a half million dollar player is being outplayed by Luke Schenn, you have to make tough decisions.
We also need to remember that Hamonic is making $3,000,000 a year for the next two years and having him as a healthy scratch isn’t a great situation either.
Advertisement
Ad
Advertisement
Ad
Perhaps Schenn’s game falls off and he is sent back to the press box in place of Hamonic or Poolman and then the Canucks can utilize their cap space a bit better but the fact remains that we aren’t even halfway into the first year of Poolman’s four-year, $10,000,000 contract and a healthy scratch is quite possibly coming in the Canucks’ next few games.

The analytics community warned about Poolman not being a top-four defenceman and the fact that the Canucks have third-pairing defenceman making under a million dollars, this contract should be at the top of Jim Rutherford’s list to address moving forward.
It’s still also very early into the contract and Poolman could find success as a bottom-pairing defenceman moving forward. He certainly has the skill to be on an NHL third pairing but is paid like a player who should never be in the conversation about being healthy scratched.
Advertisement
Ad
Advertisement
Ad
Maybe he will turn it around and prove a lot of people wrong.
For now, the discourse of putting a $2,500,000 player in the press box is a serious conversation and once Jack Rathbone returns to the NHL, this defence group gets even tougher for Poolman to find a home in. Rutherford and his management group could try and move Poolman if another team is desperate for right-shot defencemen but the four years on his deal make it a tough contract to swallow unless you can find another GM that likes Poolman as much as Benning did.
Speaking of trades, Stephan Roget wrote about cheap right-shot defencemen that the Canucks can target and you can read that article RIGHT HERE.
At least the Canucks will have an NHL-calibre defenceman available if an injury occurs to one of their right-side defencemen. Poolman is surely a capable NHL defenceman but with his puck-moving problems, he should be nowhere near the top-four.
Advertisement
Ad
Advertisement
Ad