Advertisement
Ad
The Canucks’ blueline is deeper and more balanced, but it still has an issue with matchups 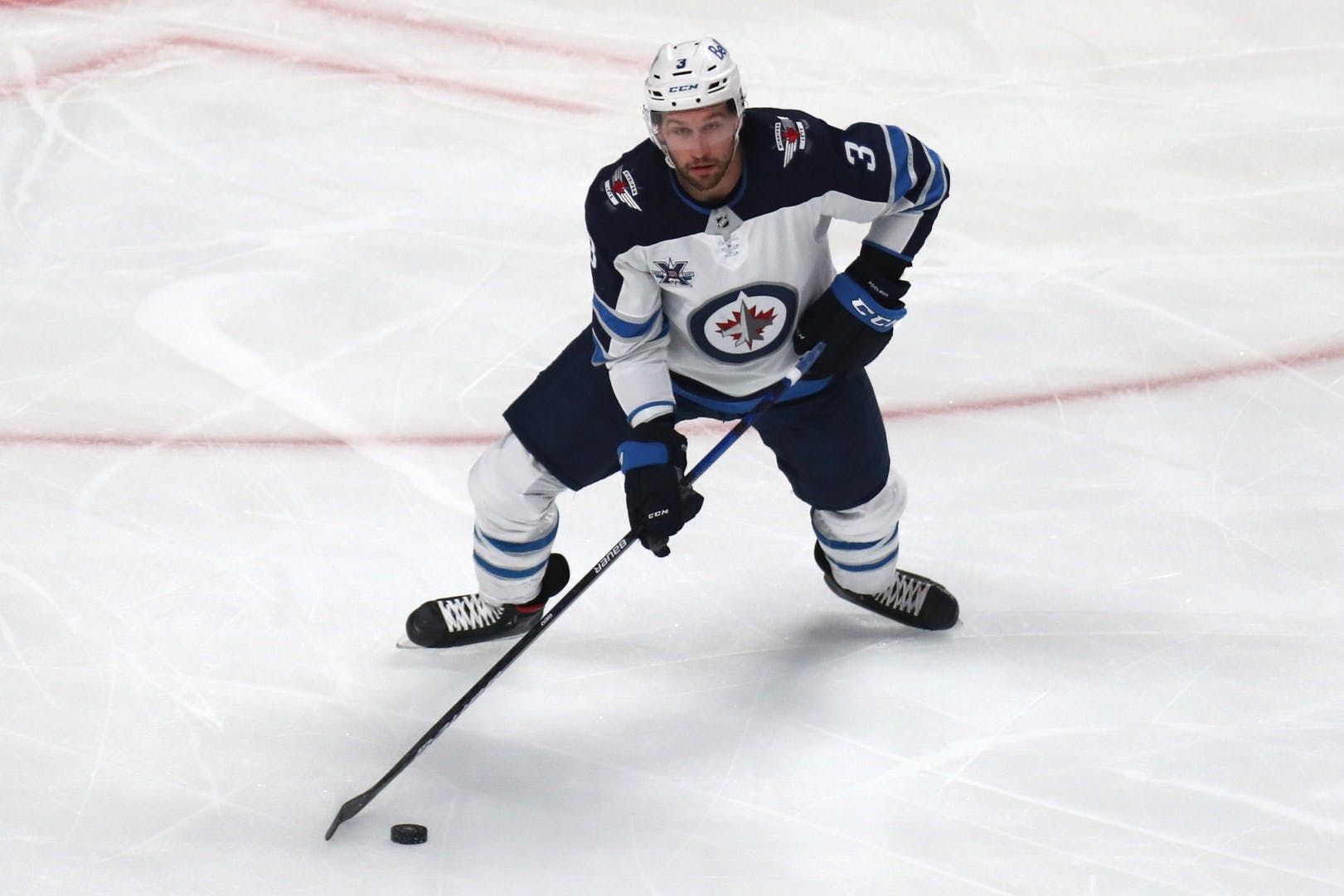 Photo credit: © Jean-Yves Ahern-USA TODAY Sports
By Stephan Roget
1 year ago
Comments
Something old, something new. Something borrowed, something blue(line).
For better or for worse, it’s still early in the offseason and the Vancouver Canucks are already married to an updated and refurbished version of their defence corps.
Within the span of about 24 hours — and having already acquired Oliver Ekman-Larsson the week prior — the Canucks saw Nate Schmidt and Alex Edler depart, re-upped Travis Hamonic, and added all of Tucker Poolman, Luke Schenn, Brad Hunt, and Brady Keeper to the roster via free agency.
In doing so, Jim Benning and Co. have undoubtedly made the Vancouver blueline deeper — no more extended stints for the likes of Jalen Chatfield — and more balanced, with plenty of natural right shots to choose from.
They may have even made the blueline outright better than the 2021 edition, though some will quarrel with that assertion.
Advertisement
Ad
Advertisement
Ad
But it’s a long way to go from “better” to genuine domestic bliss on the backend, and there the Canucks are still coming up short. In particular, they’re still going to have a very difficult time matching their blueline up against the opposing top lines of the league.
In 2021, those difficult minutes went, somewhat by default, to Edler and Schmidt. Each of them started more than 60% of their shifts in the defensive zone and faced a quality of competition well over-and-above the league average, with almost half of their ice-time occurring against the likes of Connor McDavid and Auston Matthews.
But although Edler and Schmidt were handed those minutes, it doesn’t mean that they handled them. After some initial success early in the 2021 season — during which time Edler was posting some of the best defensive metrics of his career — the strain got to both of them, and each saw their performance spiral by all measures.
Advertisement
Ad
Advertisement
Ad
It’s perhaps no coincidence that, by the end of the season, both were ready to move on.
And though Edler and Schmidt have departed, those tough minutes and matchups remain. Someone is going to have to play them. But who?
That really is the question.
On any wedding day, it’s important to know one’s good side from their bad, and the same can be said of analyzing the Canucks’ blueline for 2021/22, as succinctly summed up by this image:

We already know that, despite his exorbitant salary, Tyler Myers is not a player who should be put on the ice against the best the opposition has to offer. In certain circumstances, against slow and sizeable opponents, he can indeed do a little shutting down — like he did to Alex Tuch in the playoffs a year ago.
Advertisement
Ad
Advertisement
Ad
But against more swift and cerebral scorers, Myers is lost. As such, his deployment will still need to be sheltered as much as possible. At his price tag, putting Myers into a situation in which he can succeed is vital to the team’s overall success.
The same can be said, to a lesser extent, about Travis Hamonic. He was once considered a top-notch two-way defender, but his ability to face top lines has been greatly reduced in recent years. In 2021, he faced roughly average QoC and started more shifts in the offensive zone than the defensive, and he still ended up below water on goals against, possession, and especially high-danger scoring chances, which Hamonic’s team controlled just 36.61% of while he was on the ice at even-strength.
It’s tempting to attribute much of that to Hamonic playing most of his minutes alongside the struggling sophomore Quinn Hughes, but then how to explain the fact that Hughes’ numbers stayed relatively stable away from Hamonic, while Hamonic’s crumbled without Hughes?
Advertisement
Ad
Advertisement
Ad
From NaturalStatTrick.com
While it remains possible that Hamonic could handle some difficult minutes — perhaps spelling someone off on occasion when the need strikes — it is also something that should be largely avoided by coach Travis Green.
Which brings us to the new kid on the right-side block, Tucker Poolman.
Aside from one of the cooler names in hockey, Poolman does arrive in Vancouver with at least a middling reputation as a defensive defender.
In 2021, he was asked to play most of his minutes on the Winnipeg top pairing alongside Josh Morrissey, often against opposing top lines.
The results were far from encouraging. Not only did Poolman’s offence disappear — going from a 24-point pace in 2019/20 to just a single assist through 39 games last year — his defensive metrics were well below what one would expect from a shutdown-type.
Advertisement
Ad
Advertisement
Ad

But there is still some reason for optimism in Poolman’s defensive chops — and there’d better be after the Canucks shelled out $10 million over four years for him.
For one, the Morrissey/Poolman pairing was still on the ice for more even-strength goals for than against. For two, Morrissey played notably worse without Poolman, while Poolman played far better and suppressed chances at a much greater rate when away from Morrissey, even if the goal-differential of that short sample size doesn’t quite bear that through.
From NaturalStatTrick.com
Even better is that Poolman’s big and burly game seems naturally suited to the postseason.
Advertisement
Ad
Advertisement
Ad

Okay, I found my biggest reason yet to be optimistic about Tucker Poolman.
In four playoff games against McDavid, Draisaitl, and the Oilers, Poolman was not scored against once at even-strength. Not once!#Canucks

Not getting scored on through a four-game sweep while playing regular minutes against Connor McDavid and Leon Draisaitl is impressive by any standard.
But, again, that’s a small sample size, and Poolman’s greater body of work — even within the context of two COVID-shortened seasons and an actual arduous battle with the virus — suggests he’s not quite the shutdown droid the Canucks are looking for. The lack of control over high-danger chances alone could mean the nightly potential for disaster.
Well, too bad, because he’s going to be getting those minutes anyway. That’s what the Canucks signed him for, that’s what they’re paying him for, and despite his warts, Poolman is still the best fit on the roster for the job.
Advertisement
Ad
Advertisement
Ad
Now, the question becomes who to pair him with.
Most would agree that keeping Hughes away from difficult matchups should be a high priority for 2021/22. His sophomore season did not go exceptionally well, and he needs time to rebuild his defensive game while continuing to let his offence flourish. The best bet for that is probably to shelter his matchups and zone-starts as much as possible.
Jack Rathbone is a still largely unknown quantity, but he could theoretically provide more of a two-way presence than Hughes. Even then, asking him to take on shutdown minutes as a rookie is probably a good way to have a bad time.
That leaves Ekman-Larsson.
The man they call OEL has suffered through, by his own admission, four poor seasons in Arizona. But not all bad seasons are created equal. True, Ekman-Larsson had the worst campaign of his career in 2021, facing sub-average competition on the Coyotes’ second pairing and still coming away bleeding goals and chances against. You can actually chart the franchise beginning to lose faith in him through Micah Blake McCurdy’s patented HockeyViz imagery:
Advertisement
Ad
Advertisement
Ad
From HockeyViz.com
But in every season prior to 2021, Ekman-Larsson was still facing an above-average QoC and, as recently as 2018/19, he was maintaining positive possession stats despite that.
The offence has stayed more or less in place for OEL. The defence has slipped greatly, but not so far or for so long that a rebound is impossible.
A pairing of Ekman-Larsson and Poolman going up against opposing top lines isn’t an ideal solution, but it is the best solution the Canucks have at the moment, and it at least has the potential to perform better than the Edler/Schmidt pairing did in 2021.
Of course, as with all less-than-perfect solutions, it also has the potential to create more problems.
The Canucks were probably hoping to have OEL partner with Myers in order to settle the latter down a bit. Placing OEL with Poolman means saddling Hughes — whose metrics plummeted when paired with Myers last season — or the rookie Rathbone with Myers, neither of which looks like a recipe for success.
Advertisement
Ad
Advertisement
Ad
But if the Canucks want something more effective, they’re going to have to get into the creative options.
One such possibility is placing more faith in Rathbone than one might ordinarily place in a rookie. Green could put Rathbone with Poolman to see how he handles semi-shutdown minutes, or he put him with Myers and hope there’s a better fit there than there was with Hughes.
Another strategy is to spread the shutdown responsibilities out more situationally.
Playing against the high-flying Edmonton Oilers? Get OEL and Poolman out there.
The plodding but powerful Vegas Golden Knights are in town? That might be a job for Myers.
A rough-and-tumble opponent full of bullies? Now it’s Hamonic’s time to shine.
More than anything, the best bet seems to be leaning on OEL and Poolman as your primary defensive deployment, but not over-relying on them, as was done the case for Edler and Schmidt in 2021.
Advertisement
Ad
Advertisement
Ad
Give OEL and Poolman the bulk of shifts against opposing top lines, but not ALL of them. Throw Hughes and Hamonic out there for the odd defensive-zone faceoff. Give Hughes and Rathbone sparing shifts against the McDavids of the league, and then give them time to reflect and learn from the experience instead of just going out there to do it again. Get Luke Schenn into the lineup every so often and load him up with tough minutes as a method of reprieve.
There’s also always the option of attempting to have one partner “stay-at-home” on each pairing and dispensing with a true shutdown pairing altogether, although that comes at its own peril.
As OEL and Poolman are not ideal solutions here, crafting a deployment that doesn’t overtax them seems like the best recipe for success. Cut them breaks where possible, give them nights off. Don’t expect them to handle a role they’re not perfectly suited for night-in and night-out and expect anything other than deterioration.
Advertisement
Ad
Advertisement
Ad
Beyond that, the Canucks and their fanbase just need to hope for the best, because this is the blueline that they’ll be icing in 2021/22.
Til depth do them part.