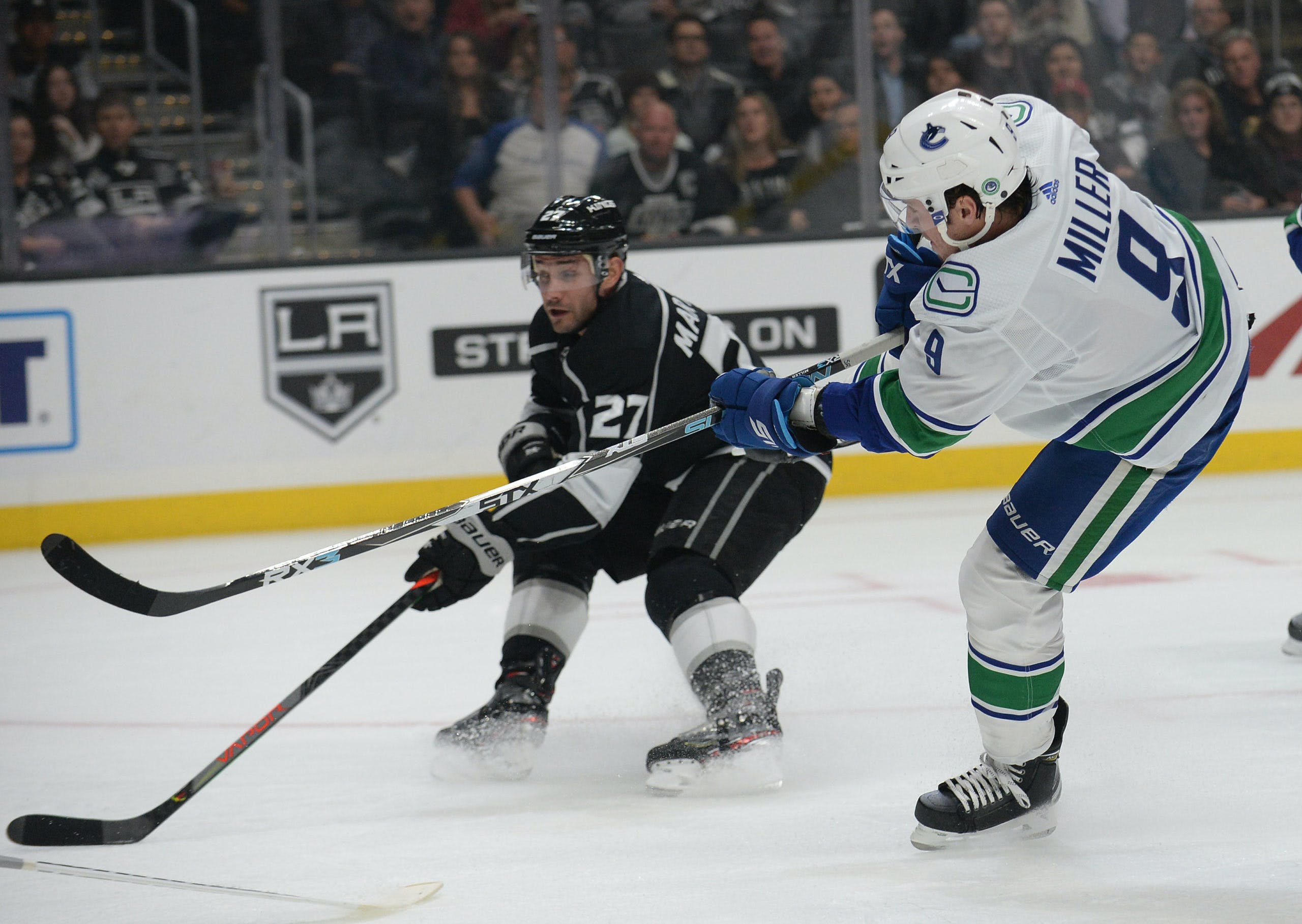 Photo credit: Gary A. Vasquez-USA TODAY Sports
By Always90four
3 years ago
Comments
THE INTRO
Welcome baaaack!
The Canucks get the night-cap of the Hockey Night in Canada doubleheader as they take on the visiting Los Angeles Kings. LA hasn’t been good lately but did win in OT last night while the Canucks have put together a handsome three-game win streak. It’s the talk of the town. Vancouver has been spreading the wealth around in that time, even more so over their last 10 games.
The push towards the postseason starts tonight and two points will go a long way.
Let’s Do This!™
WHAT ARE THE ODDS?
The odds for tonight’s game are: (VAN -175/ LAK +155) courtesy of OddsShark.com
TV / RADIO / PUCK DROP
CBC / SN 650 / 7:00 PM
LINEUPS
Alex Edler is back in the lineup and Jordie Benn sat last game. Asking for Tyler Myers to sit would be too much so Benn will probably sit again, which is a real shame. Oscar Fantenberg has been too impressive to sit but he does make less than Jordie so we’ll see there.
Advertisement
Ad
Advertisement
Ad
Josh Leivo is out until March most likely and Brandon Sutter is day-to-day.
Jacob Markstrom is well-rested and should start again this evening. Thatcher Demko has been activated which means Michael DiPietro has been sent back down to Utica.
Canucks lines courtesy of Dailyfaceoff.com:
Derek Forbort (back) has been sent to Ontario for a reconditioning stint. Alec Martinez (wrist) is on the IR. He scored the series-ending goal in 2012 against the Canucks. Never forget.
Trevor Lewis (UBI) may play this evening but missed his game just before Christmas. Dustin Brown (down with the sickness) will not play tonight. Martin Frk (no vowels?) will play in his place.
Advertisement
Ad
Advertisement
Ad
Jonathan Quick would be the likely starter but Jack Campbell hasn’t been too shabby, he got the OT win last night.
Kings lines courtesy of Dailyfaceoff.com:
GAME NOTES AND A STAT OR TWO
#CANUCKSTWITTER
Will lacrosse be a mainstream activity in the NHL next season?

Moten on when Hoglander could make the #Canucks : “Not next year, maybe the year after but I didn’t think EP would do what he did last year. Sometimes we are wrong.” #Canucks .

MY 94 CENTS
The Canucks current three-game win streak is impressive, yes it is, but it doesn’t mean they’re in the playoffs yet. They’ve outscored their opponents 13-7 in that time and the first game back after the Christmas break is usually positive. The Kings have lost their last two games and have an abysmal 5-13-3 road record this season. Two Cups will do that.
Advertisement
Ad
Advertisement
Ad
Canucks make it four-straight tonight.
AND ANOTHER THING…
Utica? For real?

Nikolay Goldobin draws a penalty and the Comets will go to the powerplay with 2:38 remaining in a 5-5 game!
What a crazy night in Utica!!!
The Comets were down 4-1 and have fought back to make this one a hell of a lot of fun.