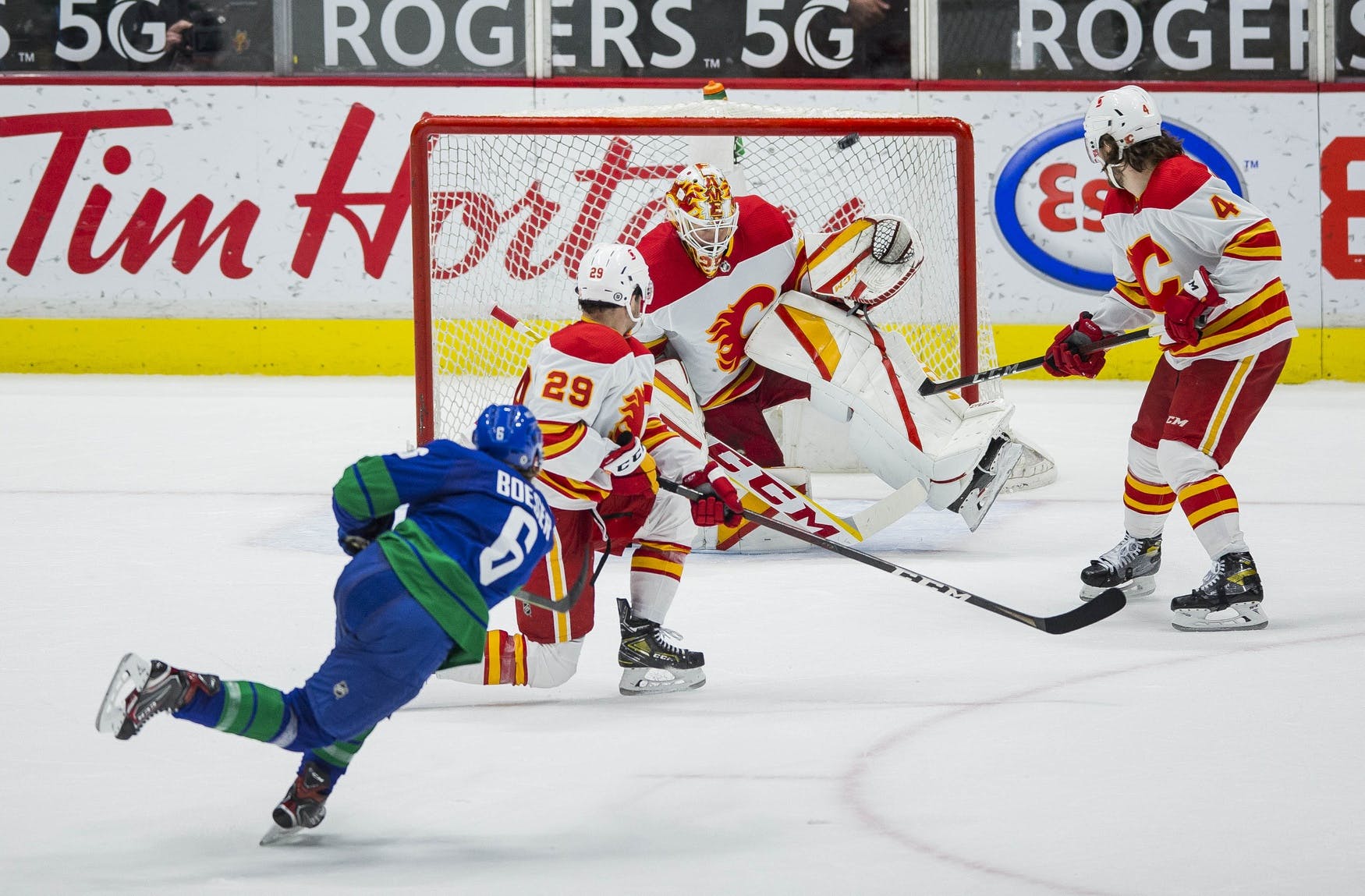 Photo credit: © Bob Frid-USA TODAY Sports
By Stephan Roget
1 year ago
Comments
With his affable nature, plainspoken delivery, and leading man looks, Brock Boeser could perhaps be considered the Rodney Dangerfield of the Vancouver Canucks.
It’s not that he gets no respect, it’s just that he doesn’t get enough of it.
No matter where one falls on the Boeser appreciation spectrum, most will agree that Boeser ranks fourth on the list of most important Canucks, trailing Elias Pettersson, Quinn Hughes, and Thatcher Demko — and we’re not here to dispute that.
But it is only rarely recognized that — just like that trio — Boeser is a true superstar and an elite talent at his position. Even worse, there are those that still want to trade the guy, either in the perpetual quest for a competent RHD or because they fear Boeser’s impending $7.5 million qualifying offer.
Advertisement
Ad
Advertisement
Ad
Such notions are, of course, silly. Boeser is absolutely worth such a salary, and will be for the foreseeable future. More importantly, the Canucks really don’t have a path forward to contention without keeping Boeser in the fold.
He may be the fourth-ranked player in the core, but that doesn’t make him any less crucial.
But don’t take our word for it. Instead, let’s examine all the measures by which Boeser has become a top-tier NHL talent.
Drafted at 23rd overall in 2015, Boeser has outscored all but a short list from that same draft class, and that list includes names like Connor McDavid, Jack Eichel, Mitch Marner, Mikko Rantanen, and Mathew Barzal.
From HockeyDB
Since arriving in the NHL full-time, Boeser has racked up 205 points in 244 regular-season games across four seasons, good enough for a PPG rate of 0.84. That production ties Boeser with Matthew Tkachuk for 47th overall among forwards during that same period of time.
Advertisement
Ad
Advertisement
Ad
That ranks Boeser ahead of notable names like Filip Forsberg, Alex DeBrincat, and Nikolaj Ehlers. It also means that he’s been producing at not just a first line rate, but at a rate better than 50% of first line players leaguewide, since joining the Canucks.
Obviously, that makes him a worthwhile player. But worth his salary?
Currently, Boeser’s $5.875 million cap hit ranks 80th amongst NHL forwards, well under the compensation that his current rate of scoring would deem as fair.
Were he to sign a new contract after this season with an AAV resembling that qualifying offer of $7.5 million, he’d come into 2022/23 with a cap hit ranked somewhere in the mid-to-late-30s for leaguewide forwards.
That could be construed as a slight overpayment, but only if one believes that Boeser won’t improve at all from here on out — and at age 24, that seems unlikely. If it’s a gamble at all, it’s one that the Canucks should be willing to make.
Advertisement
Ad
Advertisement
Ad
There’s also always the chance that a long-term extension for Boeser comes in at an even lower average. Anything around $6.5 million, and he’s right back to being underpaid.
But that’s only as far as raw point totals go, and as hockey fans tend to endlessly remind others, there are plenty of less tangible ways to value hockey players — some of which are erroneously held against Boeser.
First is the notion that Boeser is a “complementary” player. While he’s sometimes complimentary to a fault, Boeser is anything but a coattail rider.
Take last season for example. With Pettersson out of the lineup and JT Miller frequently on another line through a COVID-ravaged March, April, and May, Boeser put the team on his back, racking up 25 points in his final 30 games to secure the team lead in scoring.
Advertisement
Ad
Advertisement
Ad
In fact, whether he’s being centred by Pettersson, Miller, or Bo Horvat, Boeser has tended to score at roughly the same rate during his time in Vancouver.
Does he benefit from his place on the Lotto Line? Of course! But it’s not a one-way street. Pettersson, Miller, and whoever else he happens to be on the ice with benefit from Boeser’s presence as much as he does from theirs.
There’s also the notion that Boeser, largely due to his reputation as a “sniper,” is a one-dimensional player. This wasn’t even true when he was a rookie, and today it couldn’t be farther from the truth.
Boeser’s playmaking skills have improved in each and every year he’s played, to the point that he’s notched more assists than goals in each of his last three seasons. His setup game may not be the most underrated component of his skillset, but it is underrated. He’s not the shoot-first winger he once was, and now he’s just as much of a threat to put a teammate into a scoring position than to fire the puck into the net himself. On the power play, it’s often Boeser in the corner, bumpering the puck out to another shooter in the slot for a quick one-timer.
Advertisement
Ad
Advertisement
Ad
His two-way game has come even farther than that. In 2021, Boeser faced tougher-than-league-average matchups and still came away with a solid advanced statline. Whether it be in possession, expected goals, or chance control, Boeser rated behind only Pettersson and Nils Höglander in most categories despite playing harder minutes than either of them.
From HockeyViz.com
He hustles on the backcheck, has picked up some active stick skills in the neutral zone from Pettersson, and doesn’t get buried even when on the ice against the McDavids and Matthewses of the league.
Then there are those infamous “little things.”
Advanced stats guru JFresh recently revealed that Boeser ranked 15th overall in Puck Battle Win % among all NHL forwards. Not bad for a player who has occasionally been referred to as “soft.”
Advertisement
Ad
Advertisement
Ad

Which forwards won puck battles at the highest rate?

Using @InStatHockey's tracked stats, here are the guys you want in your corner digging for pucks. pic.twitter.com/MkNisgrRVy

Boeser wins 52.5% of his battles in the corners and on the boards. The average NHL forward has a percentage somewhere in the 40s.
Even Boeser’s goal-scoring has diversified. No longer chained to Ovechkin’s office on the left circle, Boeser has learned to score from either wing, from the rush, and even at the front of the net.
Really, there isn’t a single component of Boeser’s game that hasn’t improved drastically since he arrived in 2017.
So, why doesn’t he get his due? Why are people open to trading him? Why are they afraid of paying him what he’s worth?
Advertisement
Ad
Advertisement
Ad
Really, as strange as it sounds, it may be primarily Pettersson and Hughes’ fault.
The Canucks were extremely, exceptionally fortunate to land two franchise-level players in consecutive drafts, and with the fifth and seventh overall selections, no less. Both Pettersson and Hughes have obviously outshone Boeser since coming to Vancouver, and with good reason — they’re better players.
But not every rebuilding team is so lucky. A lot of teams come out of their turbulent years with nothing more than a player of Boeser’s calibre to show for it, and they feel grateful for it. Check out the Columbus Blue Jackets, who burned it all down and built it back up just to have Pierre-Luc Dubois to show for it. Or the Nashville Predators, who rebuilt, had Filip Forsberg become their top forward, and now need to rebuild again. The Ottawa Senators are trying to make due with Brady Tkachuk as their leading man. The Arizona Coyotes have retooled how many times? And they’ve been left with…Clayton Keller?
Advertisement
Ad
Advertisement
Ad
There are several teams out there, including a couple within the Pacific Division, who would kill for a player of Boeser’s stature.
Would Boeser be more appreciated, and more frequently recognized as the superstar that he is, if Pettersson and Hughes weren’t around to steal so much spotlight?
Yes.
Would he be more appreciated were he on approximately half the other rosters around the league?
Yes.
But none of that really matters, because the Canucks get to have their cake and eat it, too. They have Pettersson, they have Hughes, and they have Boeser, and the combination thereof places the top-end skill level of the team into the upper echelons of the NHL.
So long as Jim Benning and Co. appreciate Boeser enough to keep him around, and to give him a reasonable contract when the 2021/22 season is done, it won’t really matter that Boeser is so underrated.
The real ones will know, and everyone else will still benefit from his excellence all the same.
Advertisement
Ad
Advertisement
Ad
Even better, Boeser really doesn’t seem like to type to place much value in glory.
Heck, he’s probably humble enough to enjoy being underrated.