Advertisement
Ad
Arturs Silovs pitches 31-save shutout in ECHL debut, and what his reassignment could mean for the Canucks’ trade deadline plans 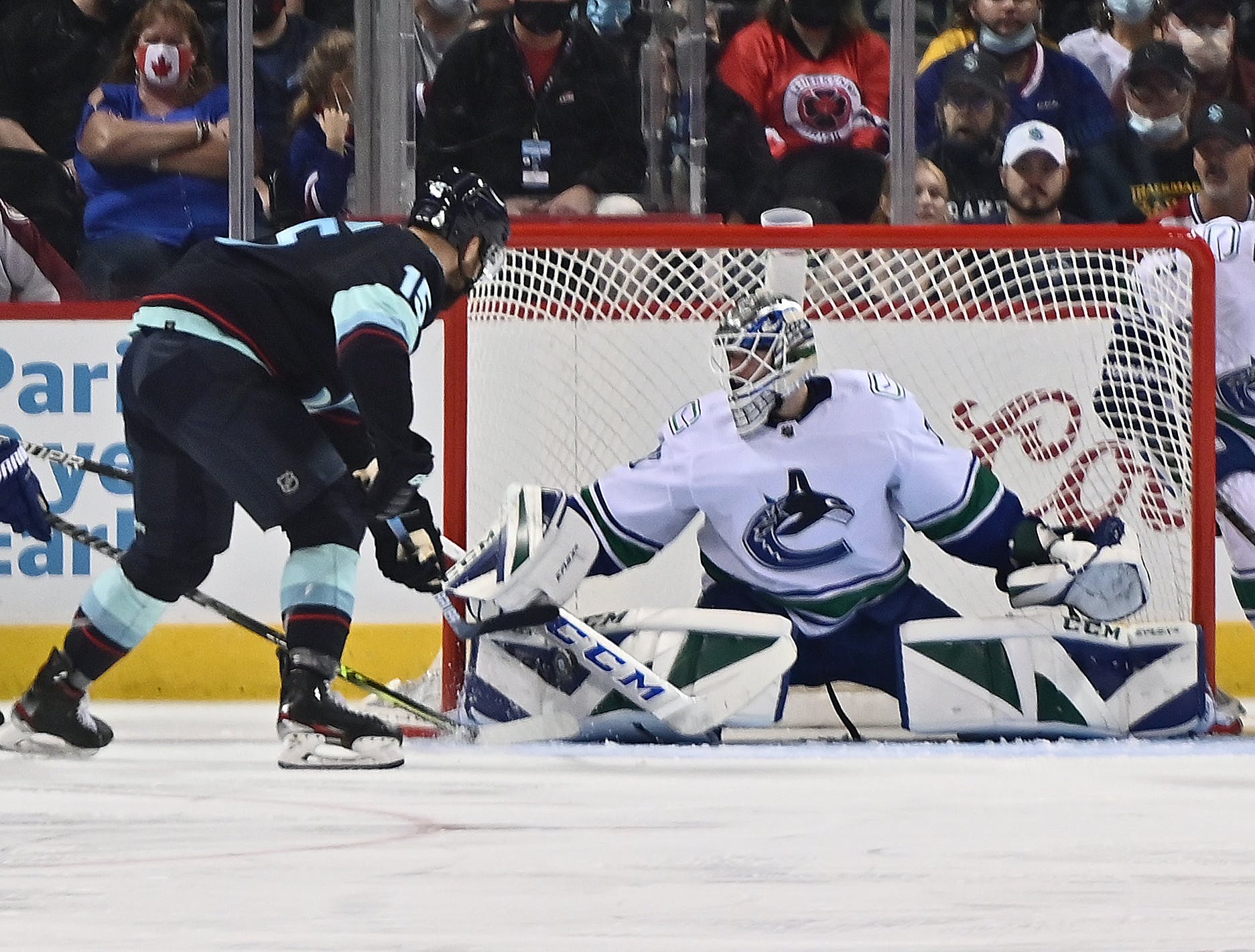 Photo credit: James Snook-USA TODAY Sports
By Lachlan Irvine
10 months ago
Comments
When Arturs Silovs made his ECHL debut on Friday, it had been a month and a half between starts for the Canucks goaltending prospect. But he sure made up for lost time.
Silovs’ 31 save performance backstopped the Trois-Rivières Lions to a 1-0 overtime victory over the Maine Mariners in his first game since January 30. With the Lions currently holding the fourth and final playoff spot in the North Division, Silovs’ reassignment from the American Hockey League could make the difference in booking a postseason berth.
With the Abbotsford Canucks’ log jam of goaltenders including Silovs, Spencer Martin and Mikey DiPietro, one always had to be relegated to the press box.  Despite a strong start to his AHL campaign, the 20 year old Latvian struggled down the stretch, posting an .888 save percentage and ended up as the odd man out; Silovs hadn’t even served as a backup for Trent Cull’s team since February 12.
It’s no secret that the Canucks have struggled to manage their goaltending prospects over the last couple of seasons. Michael DiPietro infamously went over a year between games after the Canucks left him on their taxi squad for most of the 2021 season and never acquired a goaltender to take his place. The previous management regime attempted to remedy the issue this year by signing the veteran Martin, but his strong play for Abbotsford has come at the cost of a developing prospect in Silovs.
Advertisement
Ad
Advertisement
Ad
With only ten starts all season, it was clear that Silovs needed a chance elsewhere for more game time. Despite the extended layoff between games, it seems like the former 2019 sixth-round pick hasn’t skipped a beat.

31 save, 1-0 shutout win for Arturs Silovs in his ECHL season debut tonight, his first game since Jan. 30 … from a trusted goalie person who watched: “looks insanely smooth”

Smooth is also how AHL Nucks Harvest‘s Cody Severtson would describe Silovs’ play in the few starts he saw. Speaking to CanucksArmy yesterday, Severtson compared the young goalie’s efficient style of movement to Jacob Markstrom and felt Silovs’ AHL struggles were more connected to the blue line in front of him.
“He looked crisp for his first few starts, then he took a high elbow to the head in one game and started looking a bit less confident,” Severtson said. “I don’t think he ever looked awful, he just played behind some bad defensive efforts on a couple nights which may have rattled his confidence.”
Advertisement
Ad
Advertisement
Ad
“The ECHL will be a massive benefit because the kid will actually get game action.”

What the Silovs move may mean for Jaroslav Halak

If Vancouver can find a way to ease their glut of options in net, that action could come in Abbotsford again. But the biggest aspect of Silovs’ reassignment is what it says about the current trade market surrounding one Canucks goalie: Jaroslav Halak.
With Silovs reassigned so close to the trade deadline, it seems likely that Canucks management is expecting their backup goalie to remain in Vancouver past Monday at noon. Sportsnet’s Elliotte Friedman said as much himself while previewing every NHL team’s deadline plans in yesterday’s 32 Thoughts podcast.

According to Friedman, there are Garland/LA Kings talks going on, JT Miller is probably not traded, Boeser is complicated, offer for Schenn might go up, Motte is probably traded, interest is not there for Halak. #canucks

If Halak’s full No Move Clause and $1.25 million bonus owed for ten games played weren’t enough to keep buyers away, his .883 save percentage and 2-6-2 record have certainly done the job. While it’s possible that a playoff team dealing with injuries in goal like Vegas or Toronto might be willing to take the gamble, the odds of that happening are getting increasingly slim.
Advertisement
Ad
Advertisement
Ad
Perhaps Patrik Allvin and Jim Rutherford will put together a last-minute deal that sends Halak to a contender, pushes Spencer Martin into a permanent NHL backup role and vacate a spot in Abbotsford behind Mike DiPietro. But until that room opens up Arturs Silovs will remain in Trois-Rivières, getting the starts he sorely needs.