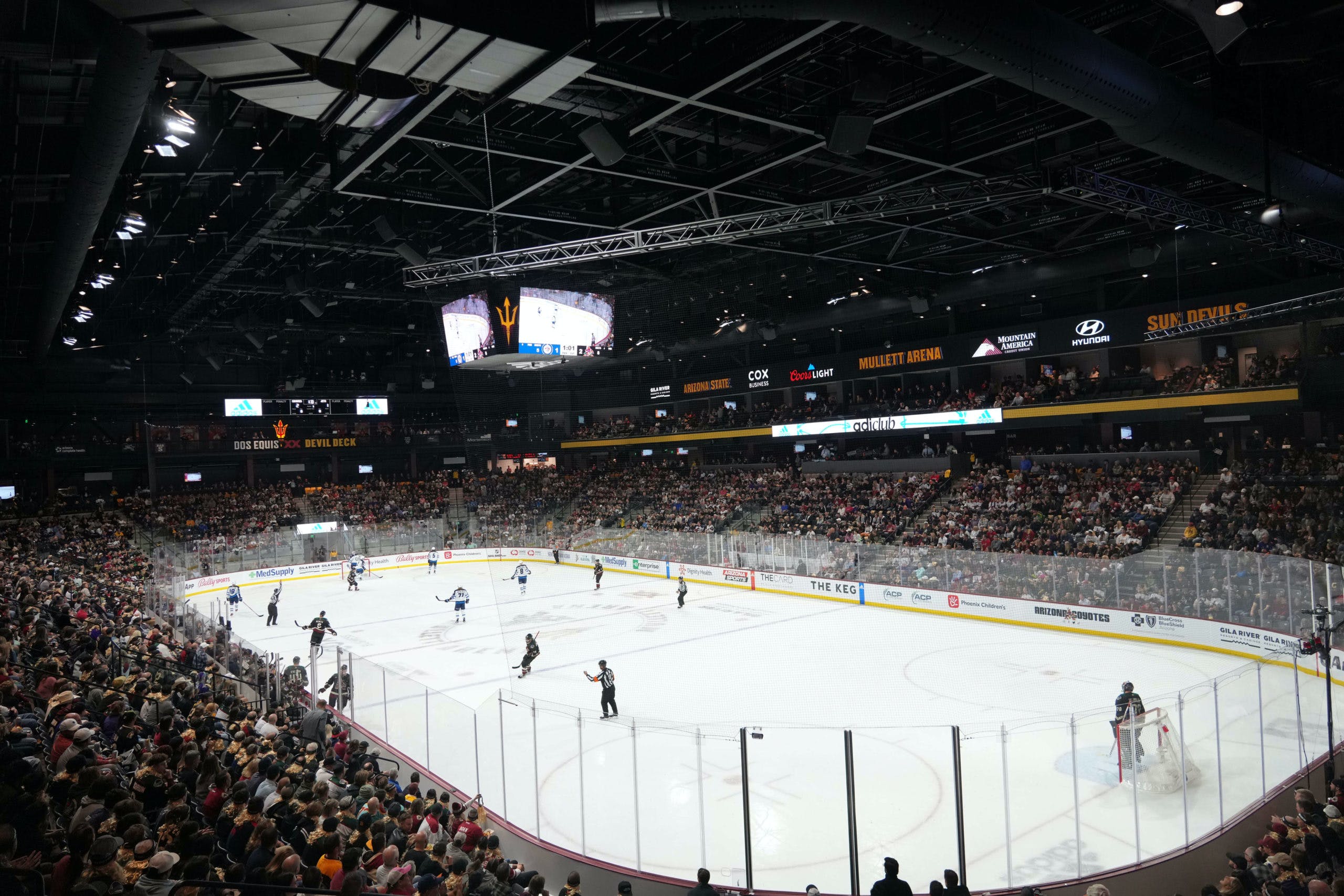 Photo credit: © Joe Camporeale-USA TODAY Sports
By Noah Strang
1 month ago
Comments
If you’ve spent any time on social media lately, you’ve likely seen images of the dressing rooms at Mullet Arena, the new home of the Arizona Coyotes. Over the past few months, much has been made about the Coyotes moving into a college stadium. However, these newly released images really drive home the reality of the situation.

This is the Arizona Coyotes locker room. The HOME locker room in their arena.

If I was on that team, I'd request to be sent down to the AHL 😂 pic.twitter.com/EPphNvNvSX

This is not what the dressing room of an NHL stadium should look like. Anyone that’s played hockey across the lower mainland might mistake these images for the Richmond Ice Center. The fact that NHL players are getting changed in this environment is embarrassing for the league.
Advertisement
Ad
Advertisement
Ad
As part of the deal for the Coyotes to play in the arena this season, owner Alex Merulo was forced to invest tens of millions of dollars into the infrastructure, including the dressing rooms. However, the result has been far from perfect and has led to the NHL being a laughingstock across the internet.
Beyond the fans, this is embarrassing for the players and will likely dissuade them from wanting to go to the desert. The Coyotes have had enough trouble building a competitive roster without providing their players with youth hockey-level facilities. The NHL has handled this situation very poorly and irreversible damage has been done to its image as a result.

When people discuss professional sports in North America, there are four core leagues that are often mentioned. This includes the NFL, the NBA, the MLB, and the NHL. However, despite the exciting on-ice product, the NHL has struggled to catch on in non-traditional markets. Positioning itself as a league that’s fine with these conditions only adds to the view of the NHL as a little brother to the “real” professional sports leagues.
Advertisement
Ad
Advertisement
Ad
In a vacuum, Phoenix, Arizona, and the surrounding area is not a bad place to host a professional hockey team. While it is located in the middle of a desert, Phonix is one of the five largest cities in the United States and has the potential to support a hockey team. Unfortunately, the inability to find a permanent home has been a major deterrent to any type of sustained success.
The Arizona Coyotes experiment has had a rough go but commissioner Gary Bettman is reluctant to admit defeat. While it still seems as if Arizona can support a team, having them play in these conditions for multiple seasons will be a blow to the NHL’s image. For a league that’s trying to break through in the Arizona market, what message do these dressing rooms send? Imagine debating watching your first game and you see these images online, especially after being a fan of the NFL or the NBA.
Advertisement
Ad
Advertisement
Ad

The silver lining in all of this madness

The silver lining to the Arizona Coyotes’ current stadium situation is definitely the student section that has been set up for their games. The organization has set aside 200-400 tickets for every game that are available to students for only $25. This meant that there was a strong and rowdy student section at the home opener.

With ticket prices rising around the NHL, this is the type of experience that many teams are missing out on. Allowing students to get cheap tickets to these games creates a fun and loud section within the stadium. While these fans might not be able to name all the Coyotes’ defence pairings, you can bet they’re going to make sure their voices are heard.
Advertisement
Ad
Advertisement
Ad

The vibes in the student section are immaculate 🐧🍌🍍 pic.twitter.com/Ybj5qDtC3R

The more fans dressed as pineapples going to NHL games, the better.