Year in Review: Elias Pettersson was trending upwards as a top scoring player in the NHL before he got hurt By Faber
1 year ago
It was a tough year for Elias Pettersson, but when he was on the ice, he was looking deadlier than ever as the Canucks’ best scoring threat.
Pettersson missed more than half the season this year. His wrist injury held him out of the lineup for the final 30 games of the season.
When he was in the lineup, he was firing dangerous shots at the highest rate of his three-year career. He hit the crossbar more times than he will post on Instagram this offseason and still scored 10 goals while adding 11 assists in his 26 games played.
After a slow start to the season that saw him only put up one point in his first six games, he was a point per game player all the way up until the injury ended his season.
Pettersson was taking more shots than he ever had in his career. His shooting percentage was also the lowest of his career and the combination of that and how many posts and crossbars he was hitting leads me to believe that he would have tweaked a couple of things and been able to score at the highest rate of his career if he played out the rest of the season.

The team is just so much better when Pettersson is on the ice.
He creates offence better than anyone else on this team and losing him forced this team to play guys like Jimmy Vesey, Matthew Highmore and Kole Lind in a top-six role–a spot where they did not belong.
Pettersson makes a massive difference to the team’s offence and it comes from his ability to score from anywhere on the ice while also being an above-average playmaker who draws extra attention on every shift. 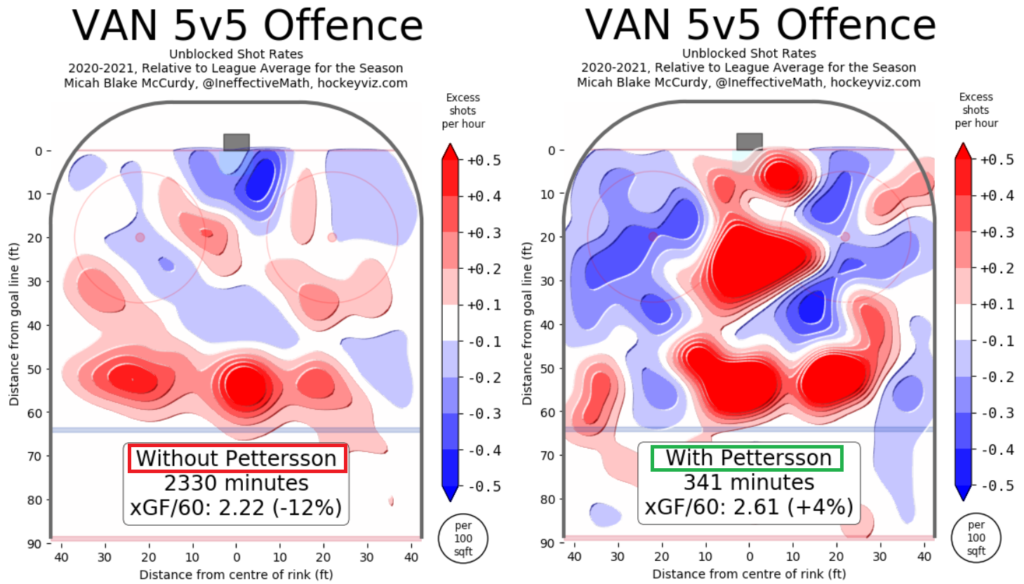 Pettersson is the most important forward on this team and moves the needle on scoring at even-strength. Once again, he was mostly featured as the centre of the Lotto Line between J.T. Miller and Brock Boeser.
More than half of Pettersson’s points came from assisting on Boeser goals or being set up by Boeser on his goals. The duo was finding even more chemistry as Boeser had a strong bounce-back season and it’s too bad that his best linemate missed the final 30 games of this season.
If Pettersson would have played with Boeser for the final 30 games, you’d have to imagine that Boeser could have put up even more points, getting him even closer to being over a point per game.
The Lotto Line played together for 202 minutes at five-on-five this season. They possessed a 51.78% control of the Corsi and a 55.34% of the expected goal share while having a positive control of the shot share and actual goal share.
Simply put, the Lotto Line was by far the Canucks’ best line this season and it’s a shame we didn’t get to see Pettersson for a full year because even with those fancy stats, the eye test was telling us that the Lotto Line could have been better.
There were so many posts and crossbars hit and it just felt like the Lotto Line spent more time in their own zone this season compared to the 2019-20 season where they were dominant on a nightly basis.
Pettersson’s shooting in 2021 was propitious when he was in the lineup. As I mentioned earlier, he was shooting and creating scoring chances at the highest rate of his career. That rise in expected goals and high danger scoring chances came from him taking more shots from closer to the net.
He obviously fired a ton of shots from the right circle on the power play but his shots, in general, were coming from closer to the net and showing that he was willing to go to the dirty areas more to get goals any way possible. 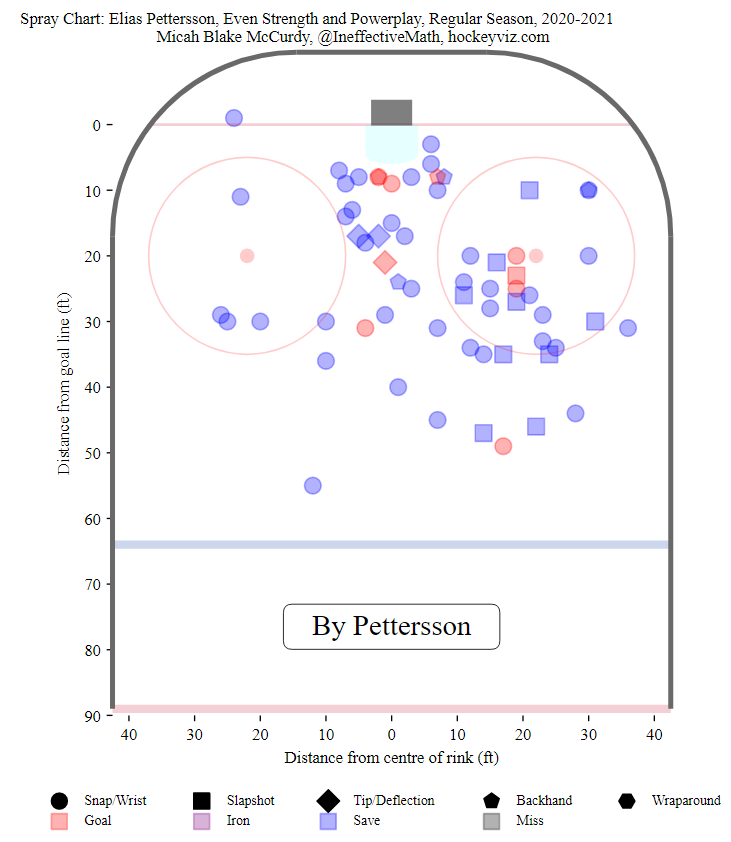 Another quick note is about Pettersson’s faceoff percentage. After having a win percentage of 41% and 41.8% in his first two seasons, Pettersson’s percentage for the 2021 season was 45%, the highest of his career.
After a slow start to the season that saw him only put up one point in his first six games, he was a point per game player all the way up until the wrist injury ended his season.
Seeing him not be rushed back into the lineup was a good thing. With how vital Pettersson is to this team, the Canucks should be worried about his future more than anything. He talked about how difficult the final 30 games of the season were for him at the end of the year zoom call with media.
“I just miss playing hockey and being able to help this team win,” said Pettersson. “Every player wants to become the best player they can be. That’s my goal too. The guys that are at the top of the scoring lead, they’re playing great. I want to be up there but it doesn’t come overnight. It comes from everyday work. I hope to someday be at that point but I know there’s a lot of work behind it.”
This offseason is going to feature a motivated Pettersson after an injury cut his third NHL season in half.
“It’s been tough. I’m just excited for next season,” said Pettersson. “I’m going to work as hard as I can this offseason to be in the best shape as possible for next season because I’m not happy with the season I played.”
In the end, it definitely wasn’t the season that Pettersson wanted.
Pettersson’s return to the action is what we all want to see. Pettersson avoided surgery, and you just hope that his wrist will be fully recovered by the 2021 season. He told media that he was close to returning but was still experiencing some discomfort when shooting the puck. Whatever needs to be done to have him 100% healthy for next season has to be step one in his offseason training.
When he was on the ice, he was once again excellent and showed why he is the most important player in this organization. Last week, he was in Los Angeles before heading home to Sweden this weekend. His agency’s main office is located in LA and this could be a good step in the right direction for management to begin contract talks with Pettersson’s camp about what his next contract looks like with the Canucks.
It’s been a tough year for everyone and after the season that Pettersson just had, I’m sure he is just as excited as Canucks fans are to have him back on the ice scoring goals for the organization.
Uncategorized
Recent articles from Faber