Braden Holtby’s debut season with the Canucks was a mixed bag: 2021 year in review 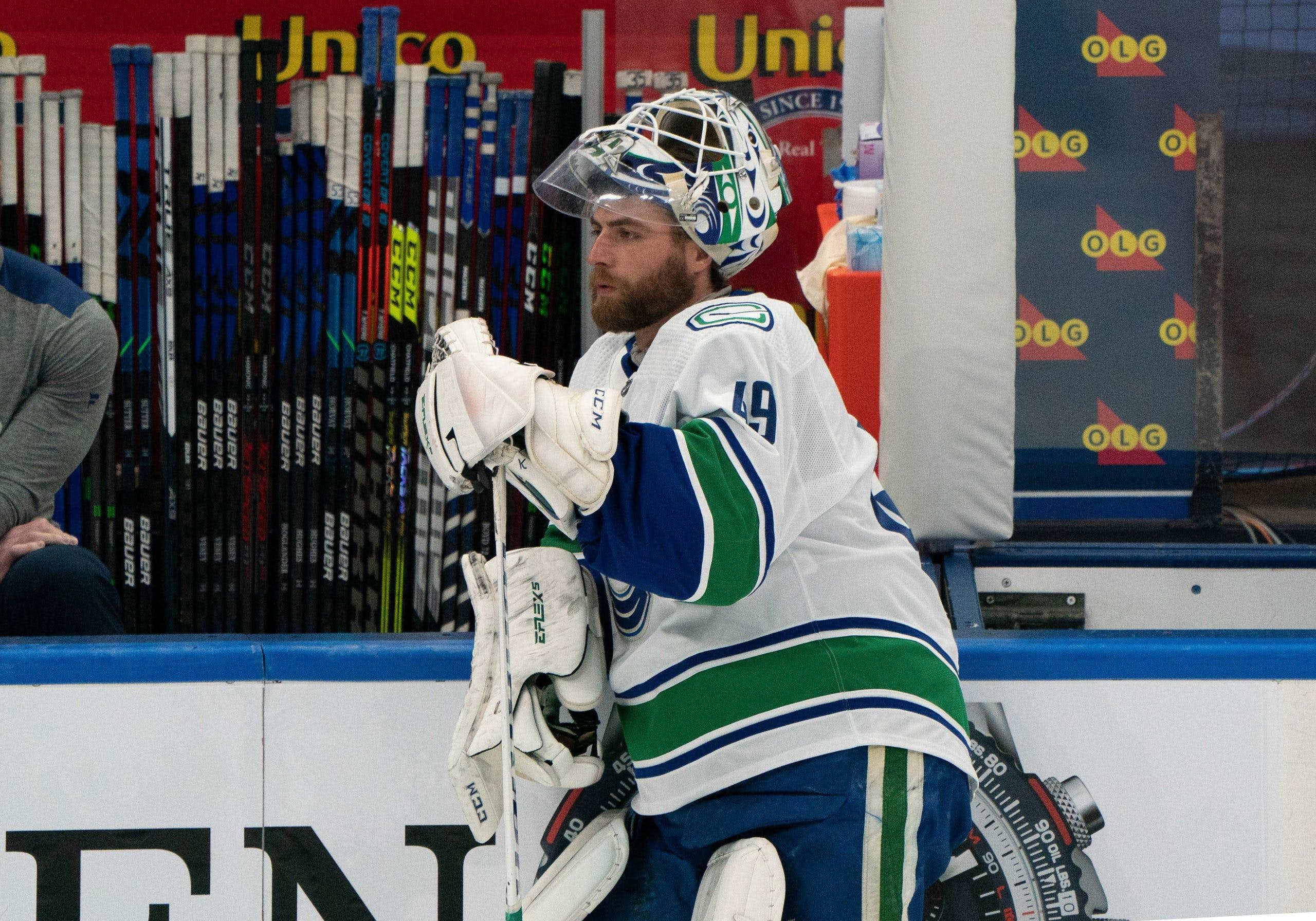 By Noah Strang
1 year ago
When back-to-back Cyclone Taylor Trophy Team MVP award winner Jacob Markstrom departed the Vancouver Canucks last offseason, the team knew they would need to find a way to replace his production. Thatcher Demko had shown promise during a breakout playoff run, but the three-and-a-half game sample size wasn’t enough to prove that he could handle a full season of starts, even if he did have a 0.64 GAA and .985 SV% during those games.
Enter Braden Holtby. The veteran netminder was signed to a two year deal with an AAV of $4.3 million after spending a decade with the Washington Capitals. While playing in America’s capital, Holtby was a five-time NHL All-Star, won a Vezina Trophy in 2016, won the William M. Jennings Trophy in 2017, and backstopped the Capitals to a Stanley Cup victory in 2018. He had developed a reputation as one of the best goalies in the league, but by the time the 2020 offseason rolled around, he was thirty years old and coming off of a rough 2019-2020 season.
During that year, Holtby saw his GAA rise above 3.00 and his SV% drop below .900 % for the first time in his career. It was a fall from grace for a goalie that had constantly been among the league’s best for multiple years leading up to that point, and unfortunate timing as he was about to hit the free agency market. This left interested teams a decision to make. Did they think that Holtby’s weak season was the beginning of a rapid decline or was it a bump in the road and that he would return to form?
With Demko ready to take at least half of the starts and renowned goalie coach Ian Clark at the helm, the Canucks were in a position where they could take a risk on Holtby. With little pressure to perform and one of the league’s best helping him refine his approach, the Canucks represented an environment where Holtby could thrive. They also clearly placed value on Holtby’s experience and Stanley Cup pedigree, something that Jim Benning was sure to point out after the signing.
“He’s going to be a good goalie for us and a real good leader for us, and he’ll help with Thatcher’s development,” said Benning to the press after announcing the signing. “We’re happy that he chose to sign with us and we think it’s going to be a good fit with him and Thatcher together.”

Holtby appeared in 21 games this season for the Canucks, posting a record of 7-11-3 with a GAA of 3.67 and a SV% of .889 %, both of which are career lows. Holtby also had weak advanced stats as he saved -6.7 goals above expected according to moneypuck.com, a far cry from the 4.9 number that Demko put up.
He was eventually relegated to a backup role due to his slow start — as well as the fact that Demko had a strong season — but still got to see plenty of game action due to the condensed schedule of this modified season. As the season progressed, it became clear that Holtby was a net negative in the crease and the Canucks needed to start Demko if they wanted to try to make a run at a playoff berth.
While Holtby wasn’t great in net, his performance can’t be discussed without adding the additional context of the Canucks’ defence as a whole. He was regularly put in tough positions as the structure in front of him collapsed — if it was even there to begin with — and he faced many high danger chances. Opponents had 61.55 xG in just over 1260 minutes against Holtby, many more than other goalies around the league had to deal with, despite his smaller workload.

Despite playing fewer minutes, Holtby had to face a higher quantity and quality of shots than other goalies. (Natural Stat Trick)
While the Canucks’ leaky defence did not help Holtby, it also cannot absorb all of the blame. Demko dealt with the same circumstances and did a much better job of backstopping the team and stealing a few games. While Holtby’s off-ice contributions were seemingly a significant portion of why the team was attracted to him, no player of this quality is worth $4.3 million, especially for a cap-strapped team like the Canucks.
Of course the Canucks could not have known for certain that Demko would be ready to shoulder such a large workload so early, but looking at the other goalies that switched teams last offseason leaves much to be desired from Holtby. Cam Talbot signed a $3.67 million-per-year on a 3-year deal and had a good season in Minnesota, and Jake Allen signed with Montreal for a $2.875 million-per-year on a 2-year deal and performed solidly.

Holtby only has one season left on his contract and is a prime prospect to be scooped up by Seattle in the expansion draft. However, his weak stats and downwards trend may result in the Kraken looking elsewhere for a goalie and selecting a skater from the Canucks. If he is selected, the Canucks will breathe a sigh of relief as it will free up some significant cap space for them to add to their roster.
If he does stick around, Holtby will hopefully be able to have a bounce-back season with a revamped defence group and another season of Ian Clark — if the Canucks do smarten up and re-sign the goalie guru, of course. Demko has clearly established himself as the number one goalie so Holtby’s workload would be decreased significantly, especially if the NHL goes back to a less hectic schedule.
From a long-term point of view, Holtby’s days with the Canucks are numbered as Michael DiPietro is a promising prospect in the system, not to mention Arturs Silovs who could make a push to be a part of the team in a few years. The Canucks have a bright future ahead of them in terms of goalies and Holtby knew from the time he signed that this was not a place that held a long-term future for him.
What did you think of Holtby’s season with the Canucks? Leave your thoughts in the comments down below.
Uncategorized
Recent articles from Noah Strang