Will the Canucks be making any buyouts in the summer of 2022? 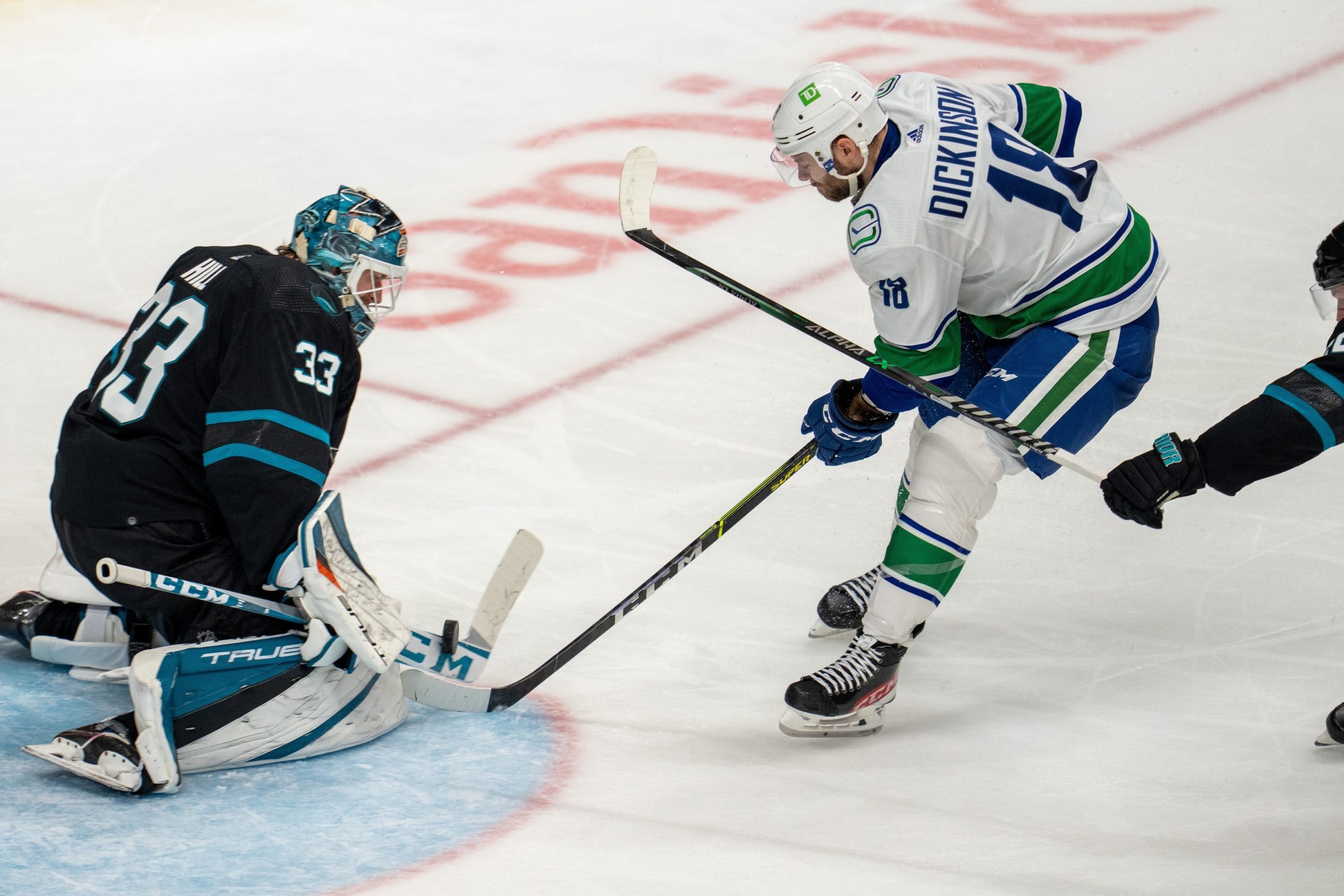 By Stephan Roget
8 months ago
The Vancouver Canucks need to do two things in the summer of 2022.
They need to improve a roster that finished five points back of a playoff spot.
They also need to cut salary, especially in the long-term.
Unfortunately, those two goals can often be contradictory.
The Canucks have their options. They can and will pursue trades, and a number of their players will draw significant interest from around the league. But dealing away a JT Miller or a Brock Boeser or a Conor Garland or even a Tyler Myers doesn’t help the team with its overall talent level — much the opposite, actually.
Another route traditionally available to NHL teams looking to clear cap space is the buyout, which allows for the ditching of overpaid contracts in exchange for a lighter cap hit over a longer period of time. Theoretically, this would allow the Canucks to create space within their cap structure without having to deal away any of their positive difference-makers.
But do any of the Canucks’ current contracts make for an appealing buyout?

Courtesy of PuckPedia
It’s hard to argue that anyone on the current Canucks’ roster is more overpaid than Oliver Ekman-Larsson, despite a solid debut season in Vancouver. But with five years remaining on his contract, buying out Ekman-Larsson would be a truly long-term decision, and not one to be made lightly. A reduced cap hit would remain on the Canucks’ — and the Coyotes’ — books for a full decade thereafter. Still, there’s some appeal, at least as far as Vancouver is concerned.
The Canucks don’t save a ton on next year’s cap by buying out OEL, but they do save more than $7 million for 2023/24 (when they’ll need to re-up Miller and Bo Horvat) and another $5 million for 2024/25 (when Elias Pettersson needs a new contract).
The savings continue for two more seasons after that, but they’re only a hair over $2.5 million, and one has to factor the cost of Ekman-Larsson’s necessary replacement into that. Chances are that by that point, the Canucks aren’t really saving any money, but they could wind up with a more effective blueline.
From 2027/28 to 2031/32, the Canucks would start taking a $2 million ding on their cap hit each year, lasting five years beyond the actual end of OEL’s current contract. With the cap almost assuredly going up plenty by then, that might not be the end of the world, but it’s still a long time to have dead salary hanging around.
Contrary to popular belief, Ekman-Larsson’s NMC would not prevent him from being bought out — it would simply give him the right to skip being placed on unconditional waivers first.
It’s worth noting, however, that an Ekman-Larsson buyout in the summer of 2023 carries almost all of the same benefits as a 2022 buyout, and only results in four years of cap penalties at the end of it, instead of five.
As such, it’s well within the realm of possibility that OEL gets bought out eventually, but it probably won’t be during this offseason.

Courtesy of PuckPedia
We know we already mentioned Myers as a talent the Canucks would rather not part with, and with the sorry state of their right-side blueline, that’s hard to argue. But desperate times call for desperate measures, and the Canucks desperately need more cap space to work with.
A trade for Myers will likely be explored this offseason, and some suitors could be found. Failing that, a buyout is always an option, but it’s not a very appealing one in this case.
Buying out the two final years in Myers’ contract earns the Canucks an extra $4 million in space for 2022/23, which is not insignificant, and would definitely give them more than enough room to get a new Boeser contract under the cap. However, it’s only a one-year reprieve. Myers’ full $6 million cap hit comes right back onto the books for 2023/24, and it’s followed by $1 million penalties for the two years thereafter.
That doesn’t really help the Canucks out much when they’ll need the space the most. In fact, all it really does is make it harder for them to field a competent blueline in 2023/24.
It’s quite possible that Myers finds his way onto a different team before next season begins, but it won’t be via buyout.

Courtesy of PuckPedia
Let’s start by admitting that no one really seems to know what the rules are regarding injured players and buyouts. There’s no specific rule against buying out players on LTIR that anyone can point to, but it’s generally regarded as being “not allowed” without that player’s express permission, and it doesn’t seem to happen much at all.
As such, before Poolman were bought out, he’d have to be free and clear of his ongoing migraine issues, which saw him finish the 2021/22 season on LTIR.
Assuming that bridge is crossed, there’s actually some real draw to taking the buyout option with Poolman. Buying him out this summer gives Vancouver savings of nearly $1.5 million in 2022/23 and more than $2 million in each of 2023/24 and 2024/25. After that, it’s a scant $900K on the cap for three more seasons, which should be easy to absorb under a rising cap.
For a player that the Canucks may not see as part of their top-six blueliners moving forward, the extra wiggle room is enticing, and there’s not much downside. On that note, however, it’s worth mentioning that simply sending Poolman down to the minors would also gain the Canucks a little more than $1 million in cap relief each season, and then there would be no penalties beyond the end of Poolman’s remaining contract. The margins are narrow, but the Canucks have multiple paths to choose from here.

Courtesy of PuckPedia
Dickinson has been an outright flop in Vancouver, but most assume that his contract is still tradeable, even if he won’t bring back much of a return. Failing that, Dickinson’s contract is definitely buyout-able — probably the most so of any contract the Canucks have right now.
Buying out Dickinson this summer yields an extra $1.7 million for 2022/23 and takes away most of Dickinson’s cap hit in 2023/24, hitting the books for just $390K. After that, it’s just two years of sub-$1 million penalties, and then it’s all over.
In other words, this buyout would give the Canucks an extra $4 million or so, spread over the two summers in which they’ll need to re-sign all of Boeser, Horvat, and Miller. That’s certainly worth their while, especially since Dickinson’s contributions can easily be replaced by a player making the minimum.
Again, trading Dickinson away is the better option, so long as the Canucks don’t need to add a sweetener to do so. But if no takers can be found, a buyout is a fine option, too.

Courtesy of PuckPedia
Unlike Poolman and Dickinson, Pearson is still very much an effective NHL player. And unlike Ekman-Larsson and Myers, he’s even paid arguably fairly for his contributions. If Pearson finds himself on the chopping block this offseason, it will be purely for financial reasons — but financial reasons are going to be a big player this summer, so the possibility remains.
As is the case for all these players, a trade that does not bring any salary back is vastly preferable to a buyout, and one would assume that there’s at least a slight market out there for Pearson’s services. If that’s not the case, his contract is, at the very least, not buyout-proof.
Buying out Pearson this offseason nets the Canucks more than $2 million in space next year and a little bit less than that the year after. Then, it’s two years of penalties at less than $1 million. There’s some appeal there, but factoring in the need to improve the roster and the cost of whoever Pearson’s replacement might be, it’s probably not worth it in the end.
Uncategorized
Recent articles from Stephan Roget