Why tanking NHL teams are outperforming the dead-last Vancouver Canucks 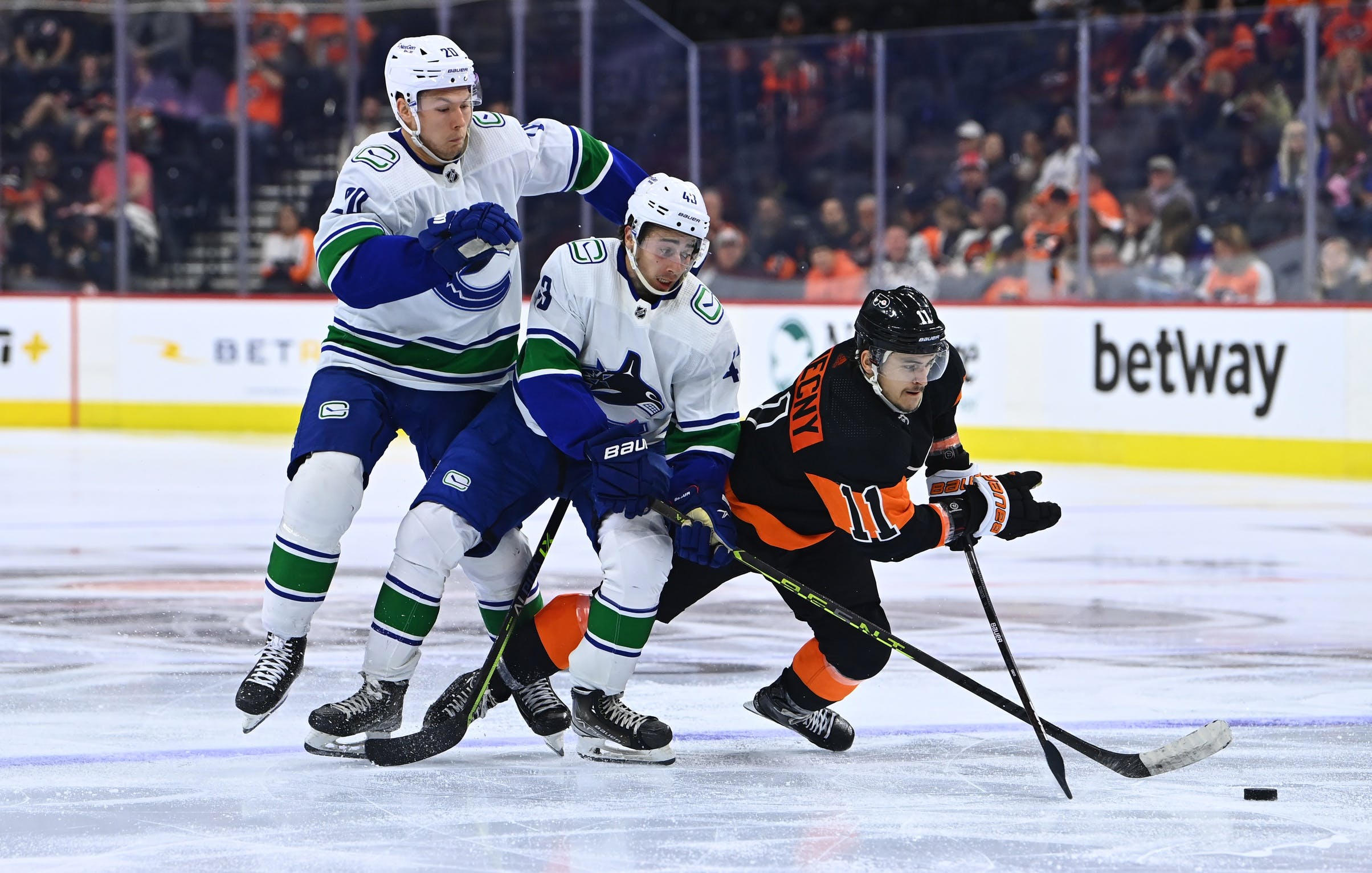 By Lachlan Irvine
2 months ago
Unless you’re counting the Reverse Retro jersey debut, the Canucks’ 5-2 loss to the New Jersey Devils was nothing new.
After a couple of games worth of positive momentum, all the same issues from the team’s previous seven losses reared their ugly head. The lack of a full-game effort, the over-reliance on great goaltending, and the extremely poor defensive work of the special teams units. It all came back.
It’s impossible not to see the glaring issues forming across the lineup. Bruce Boudreau already seems like a coach that’s out of answers ten games into the year.
“I don’t understand it. It’s frustrating. We implemented a few new guys into the lineup, and I thought that would bring energy. But we didn’t seem to win anywhere near as many battles as you would have liked,” Boudreau said after the loss to New Jersey.
Quinn Hughes noticed it in his first game back after returning from an injury. “We’ve gotta figure it out fast,” Hughes said to the media last night.
“Everyone is trying their best, but it’s not good enough right now. We’re not piecing it together.”
Hughes is right about the team not being able to put it all together, and his own effort level was consistently strong all evening. But for the majority of his teammates, it was hard to see any drive to win once Nico Hischier opened the scoring four minutes in.
As with so many of their recent defeats, the Canucks saved their worst effort for the end. In the third period, the Canucks were outshot by a whopping 14-4 margin, including just one in the first 13 and a half minutes of the final frame. That type of statline is inexcusable when you’re down 4-1 in your own building, a margin that even one early goal can make look a lot less daunting.
And this is far from a one off. In their last loss to the Hurricanes, the Canucks were soundly outshot 15-3 in the final 20 minutes, despite being behind by just a single goal for half of the period.
On the surface, these types of issues might seem small right now. After all, every bad team plays games like these, right?
Not exactly. Just ask the clubs that are supposed to be tanking.
You don’t have to look far above the Canucks’ place in the standings — dead last at the time of this writing — to find teams working much harder and playing a much more up-tempo brand of hockey. Turn on just about any NHL broadcast and you’ll see expected basement dwellers throwing everything and the kitchen sink at Cup contenders. They don’t always win of course, but the results look a whole lot closer than any recent Canucks defeat has.
The Coyotes have earned five points in their last four games, including a 3-1 win over the Florida Panthers last night. The Canadiens have gone from a team needing an MVP goalie to win to one that can keep within two points of second place in the Atlantic. The rebuilding Ducks clawed their way to an overtime comeback victory against the Leafs on Sunday, and are routinely playing exciting hockey despite their 3-6-1 record.
The Blackhawks, Sabres, Flyers, and Kraken, all expected to be in the fight for the bottom, are currently in playoff spots instead. Even the Sharks, with a league-worst winning percentage of .292, have lost by a multi-goal deficit just once in their last seven games.
All of these teams seem oblivious to the fact that they’re supposed to lose by huge margins and put up zero fight against the top dogs. Meanwhile, take one look at the Canucks’ body language in recent outings and you’ll see a team already resigned to their fate.
Newcomer Ethan Bear appeared to look as confused as anybody when no one was looking for a stretch pass in the dying moments of the first period.
Sure, the odds of that play translating into a goal are slim. But letting the clock tick down, even by six seconds, in a 2-0 deficit, isn’t the choice a truly desperate team makes.
And judging by where they’re sitting in the standings, this is a desperate hockey team. The only people who don’t seem to know it are the ones on the ice.
Editorials
Recent articles from Lachlan Irvine