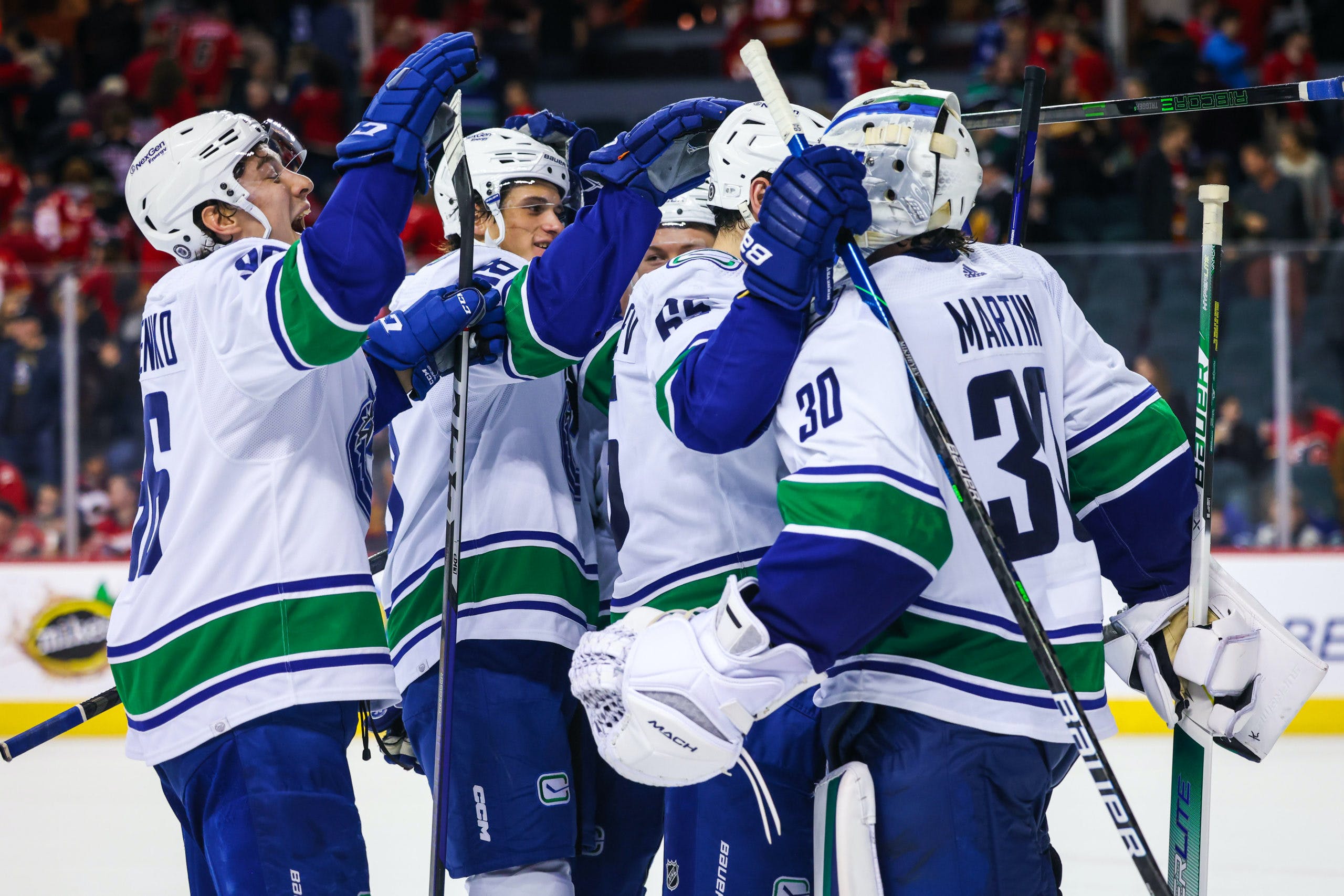 By Noah Strang
1 month ago
The Vancouver Canucks are riding a three-game win streak that has injected some optimism into the fanbase. While they’re still not in a playoff spot, the six points collected have helped them get closer. These past three games have also provided some positive storylines such as Elias Pettersson’s dominance, Quinn Hughes’ first goal of the season, and the team allowing two goals or fewer in consecutive games for the first time.
All three of their wins have come against division rivals. It would seem natural to get excited about the Canucks putting it all together and going on a run, extending this winning streak to five or six games, and getting within reach of a playoff spot. However, a closer look at the numbers suggests that’s unlikely to happen.
While the surface results have changed, the underlying numbers indicate that the Canucks have been playing no differently over this stretch. They’re still bleeding scoring chances and struggling to produce quality offensive opportunities at 5-on-5.
There have been no revolutionary tactics employed by the coaching staff, no new line combinations that are taking the league by storm, and no change in mindset that has led to a committed and engaged roster. This is the same Canucks team that has serious structural issues and needs sweeping changes to become a legitimate playoff team, much less a perennial Stanley Cup contender.

The good news about the Canucks win streak

Since December 21st, the Canucks are tied for the league lead with a 1.00% points percentage, meaning they’ve managed to collect every single point that’s been up for grabs. This has largely been due to the team’s strong offensive output, as they’ve scored 17 goals over those three games.
The Canucks haven’t been relying on their power play for this scoring outburst. With 4.56 goals /60 minutes at 5-on-5, they’ve managed to put the puck in the back of the net at even strength. Stars such as Bo Horvat and Pettersson have been crucial in putting goals on the scoreboard during these minutes.
While the Canucks defence hasn’t been amazing over the last three games, it’s been passable. They’re allowing 3.04 goals/ 60 minutes at 5-on-5, a mark that is good enough for 20th league-wide.
They’ve managed to outscore their issues, and this would be fine if it correlated with an increase in a larger share of possession, scoring chances, shots, or expected goals. Instead, it’s almost solely driven by an inflated shooting percentage that will fall back to earth sooner than later.

Why this stretch far is from sustainable

During this winning streak, the Canucks have controlled 46.25% of the scoring chances, 45.87% of the expected goals, and have had a Corsi percentage of 45.93%. None of these numbers scream “strong NHL team”. In fact, they don’t even suggest “average NHL team”.
The performance against the Sharks was the most impressive, but even then, it’s not the best indication of who the Canucks are as a team considering the Sharks’ place in the standings.
“There’s a lot more we can do,” Bruce Boudreau commented when asked about the win. “Do that against Winnipeg, do that against Calgary. San Jose is a team that works hard, but they don’t have the depth that these other teams have, and it’s important that we’re able to do those things against the top echelon of teams.”
Another number that stands out for the Canucks during this stretch is their league-leading 16.67% on-ice shooting percentage and 1.064 PDO. While the Canucks do have some great shooters on their team, neither of these numbers is sustainable. Fans should enjoy this hot streak while they can because it won’t last much longer.
It’s fun to watch the Canucks win games, but all these winning streaks are doing is implanting a false vision of the team into the heads of the coaching staff, management, and fans.
The Canucks are managing just 2.39 expected goals per sixty minutes during this streak. This is good for 20th in the league, meaning that their ability to create goals hasn’t been even league average. Since they’ve been relying on outscoring their opposition, this is a large cause for concern.
The Canucks are not a good hockey team. There are plenty of structural issues that need to be dealt with if they want to be a contender. If they want to achieve that goal, management cannot let stretches like this affect any decision-making processes.
Over the next month, the Canucks play against a lot of tough teams and have an extended road trip. Their schedule has two games against the Tampa Bay Lightning, two games against the Colorado Avalanche, as well as battles against teams like Carolina and Pittsburgh. It’s near-impossible to find sustained success in the NHL while being outplayed to this level, especially against strong teams.
As the on-ice shooting percentage falls back to average, the Canucks’ actual ability will start to reveal itself again. In fact, the Canucks better hope that their numbers only regress to average, as a negative fluctuation to the same degree as this hot streak would likely mean a one-way ticket to the bottom of the standings.
Editorials
Recent articles from Noah Strang