Why the Canucks might actually get more in return for J.T. Miller this offseason than they would have at the Trade Deadline 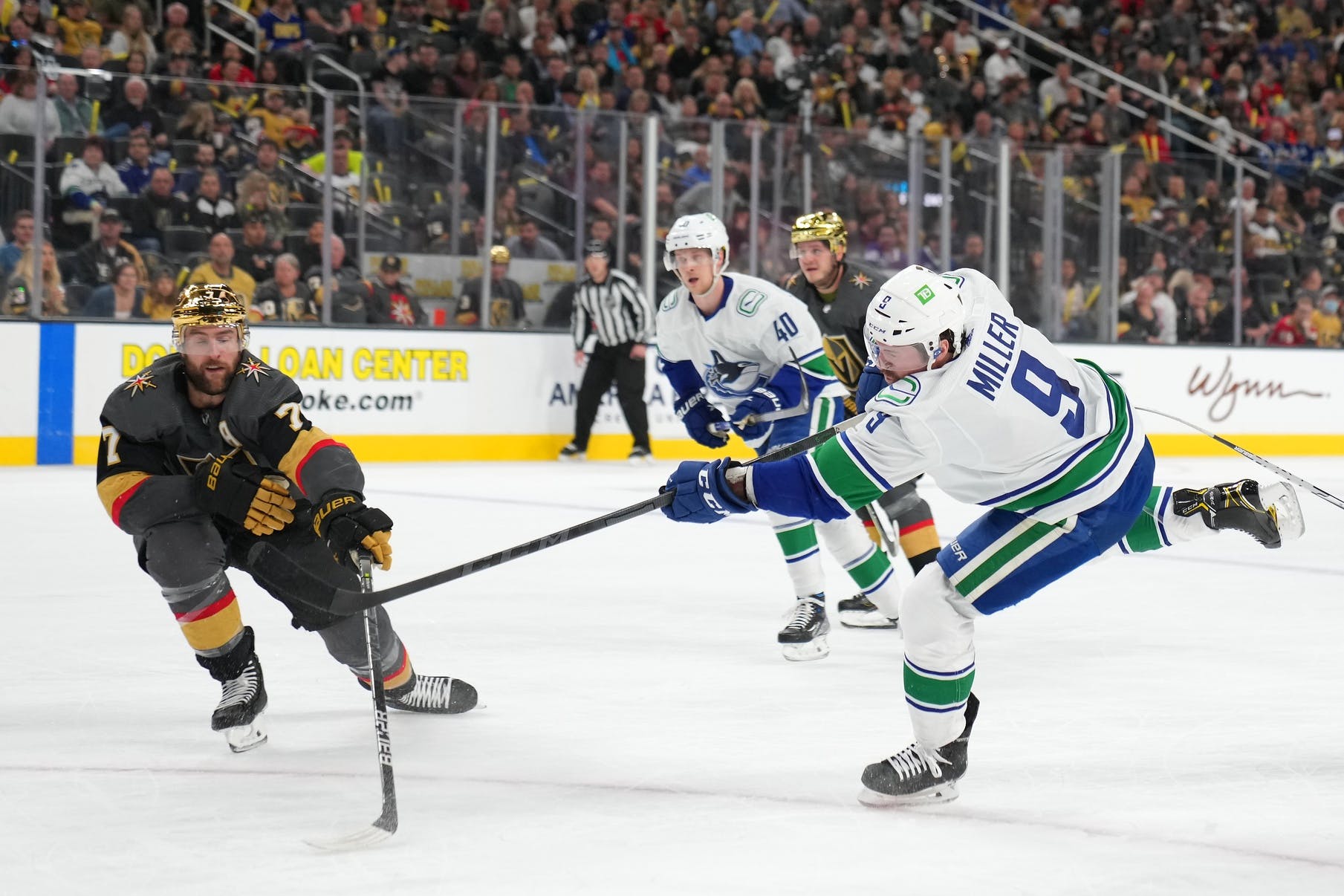 By Stephan Roget
7 months ago
Here we go again.
Throughout the 2021/22 season, no Vancouver Canuck has heard more chatter about their potential departure than J.T. Miller. But, as the 2022 Trade Deadline approached, Miller had rocketed up the NHL scoring chart and the Canucks had neared a playoff position, so that talk died down.
Some even began to talk seriously about a Miller extension again. Those chats, however, haven’t exactly been encouraging.
With Miller’s camp and the Canucks’ front office expected to be a cool $18 million apart in negotiations, the odds of Miller remaining with the team beyond the end of his current contract are looking as slim as ever.
For some, that’s frustrating, because it means that Miller will likely be traded at some point between now and the 2023 Trade Deadline. And if he’s going to be traded eventually anyway, why wouldn’t the Canucks have just pulled the trigger last month, which everyone believed was the point at which Miller had maximum trade value?
The thinking on that was sound and logical. Any team trading for Miller at the 2022 Trade Deadline would have got him for a playoff run, the 2022/23 regular season, and then another playoff run. That would have made Miller more valuable to the team receiving him than he would be this summer, or at any point after.
But does that actually correlate directly to the value that the Canucks might receive in return for him? It might not be as clear-cut as most seem to think.
In fact, there’s a decent chance that GM Patrik Allvin and Co. might actually receive more in return for Miller by trading him this offseason than they would have at the deadline.
Here’s why.
One factor at play is the size of the market. By the time we reached the 2022 Trade Deadline, there were only a handful of teams that were truly seen as Stanley Cup contenders — and maybe a few more than erroneously saw themselves as such. Only a real contender would have considered dropping the sort of massive assets that it would have cost to acquire Miller at the deadline. The pool of potential customers was thus pretty small from the get-go, and limited even further to those contenders who actually wanted Miller, had room for him, and had the sort of assets the Canucks were looking for in return.
We’re talking maybe four or five teams.
But in the offseason of 2022, that market is going to be greatly expanded.
The summer is a time of optimism. While the regular season has a nasty habit of waylaying a franchise’s hopes and dreams, there’s nothing to hold back a team’s belief in itself during the league’s off-months.
No season-wrecking injuries. No slumps. No losing streaks.
Put most simply, the offseason is the point at which the most NHL teams believe they will be competitive in the season to follow, and then that list dwindles down from there until the following April.
So, in relation to a potential Miller trade, that’s the point at which the most teams would be interested.
The offseason is also the point at which the most space will be available on other teams, both in terms of salary cap and roster spots.
The books say that a staggering 28 teams will have more than $5 million in cap space as of this summer. Obviously, a number of those teams have some of their money earmarked for various extensions of their own, but that’s still going to result in a much larger trade market for Miller than was available at the deadline.
A quick glance, and we can count more than a dozen teams that will have both the space and the need for Miller: Boston, Washington, St. Louis, Toronto, Minnesota, both New York teams, Los Angeles, Ottawa, Colorado, Columbus, Nashville, Pittsburgh, Anaheim, and maybe even more than that.
Is the larger market enough to ensure that the Canucks get equal, or perhaps even superior, offers for Miller than they got at the 2022 Trade Deadline, even without that extra playoff run on the table?
It’s quite possible. If there’s one thing that drives up prices in the NHL, it’s a good ol’-fashioned bidding war. Allvin and Co. will have the opportunity to play nearly half of the league against one another if they put Miller on the block this summer.
And, in any case, we can probably assume that the offers coming from that smaller handful of teams at the Trade Deadline weren’t exceptionally appealing, anyway. If they had been, chances are good that Miller would have been dealt already.
So, fear not, Canucks fans.
The optimal time to cash in on Miller may not have come and gone already. There’s still a haul to be had in the months to come, so long as the new management team plays their cards — and the market — right.
Uncategorized
Recent articles from Stephan Roget