Why the Canucks’ loss against St. Louis proved Bo Horvat’s value more than ever 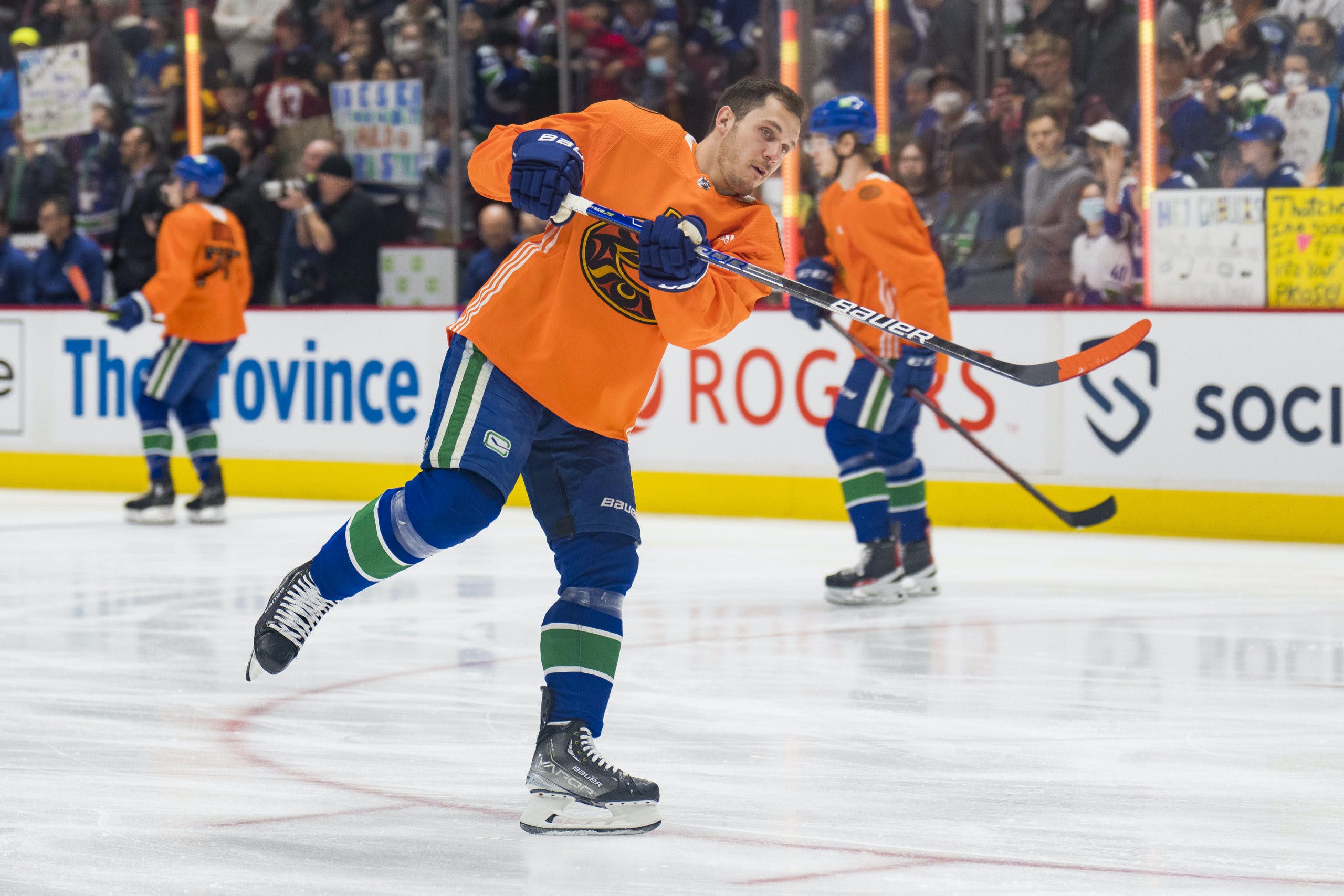 By Noah Strang
9 months ago
With every game being a must-win if the Vancouver Canucks want to contend for the playoffs, the team dropped two contests against the St. Louis Blues to all but end their postseason hopes. Captain Bo Horvat left the game on Wednesday night after the first period with what was later confirmed to be a non-COVID-19-related illness.
While sickness is a much better outcome than a serious injury and he’s likely to return to the team within a few days, Horvat’s absence for the last forty minutes of the game revealed some realities that many Canucks fans are scared to admit. Despite having a strong season and playing an important leadership role on the team, Horvat still often finds himself the target of criticism and trade rumours from the Canucks’ fanbase.
While that’s going to happen to any big-name player in a hockey-crazed market like Vancouver, it does feel at times like Horvat receives more than his fair share of the blame. Throughout his Canucks career he’s been forced to skate with a rotating cast of wingers and asked to play in all situations. He’s stepped up, never complained, and always found a way to contribute. The amount of effort he put in to improve his skating, often talked about as a major weakness when he was drafted, is impressive and speaks to his work ethic.
Without Horvat in the second and third periods on Wednesday night, the Canucks had a massive hole down the middle of their forward group. His absence was very noticeable, reminding Canucks fans of his immense value to the team. Let’s take a look at why Horvat’s presence is so crucial to the team’s success.

Bo Horvat plays an important role on the team offensively. He’s been on fire as of late and has been one of the best players in this crucial stretch of games that kept them somewhat in the playoff race.
Horvat is one of the Canucks’ deadliest weapons on the power play. He’s mastered the bumper spot and has evolved into one of the best players in that position across the entire NHL. He’s tied with Brock Boeser for the team lead in power-play goals with 10 so far this season. He also takes the majority of the faceoffs on the power play, winning 66.95% of them this season which helps the Canucks gain possession and set up in the offensive zone.
Beyond the power play, Horvat is also an important offensive contributor at even strength. At 5-on-5 this season, Horvat is fourth on the team with 22 points despite having just two secondary assists, at least four fewer than any of the players ahead of him.

While not the greatest stat, Horvat has the lowest offensive zone start percentage of any Canucks forward this year at 5-on-5. He’s regularly relied upon to take big faceoffs in the defensive zone and help the team get out of tricky situations. He is the best player in the dot for the Canucks, winning 55.57% of his draws this season with the third-most total wins league-wide.
While some of Horvat’s advanced stats don’t say the greatest things about his defensive play, he grades at about team average for many, the context of the situations that he’s placed in makes his performance more impressive. He often has to face dangerous offensive players on opposing teams and is also expected to contribute offensively. Fellow CanucksArmy writer Bill Huan covered some of Horvat’s defensive struggles in an article early last year that is worth a read.
Horvat is also depended on in all situations. He plays big even-strength minutes, a significant role on the power play, and chips in on the penalty kill. As a result of this, he’s perhaps the most difficult player to replace on the team because of all the different hats he wears. In terms of combined impact in all phases of the game, Horvat is among the most crucial players on the team.

What Boudreau said about Horvat’s absence

Who better to explain how losing Horvat to sickness affects the team than the head coach himself? When asked about what losing Horvat meant to the team in the game against the Blues, Boudreau had this to say.
“He’s got 26 goals, he’s our captain, we’re already playing shorthanded and then we lose him before the end of the third period. It’s a big blow,” commented coach Boudreau the morning after the game. “It hurts on the penalty kill because he’s a part of the penalty killing crew and it also hurt on the power play. Where did we lose the game? On the power play and the penalty kill.”
It’s clear that Boudreau values Horvat’s ability to fill different roles and adapt to various situations. With his contract coming up after next season, Horvat will certainly be in line for a pay raise. The question is how much his salary will increase by and that’s where the debate will start. With how valuable he’s proven himself to be, Horvat could be in for a big payday, making an already murky salary cap crunch that much more difficult for the organization.
How valuable do you think Bo Horvat is to the Canucks? What do you think his next contract will look like?
Uncategorized
Recent articles from Noah Strang