Why are the Canucks interested in Ethan Bear, and what might make sense as a trade return? 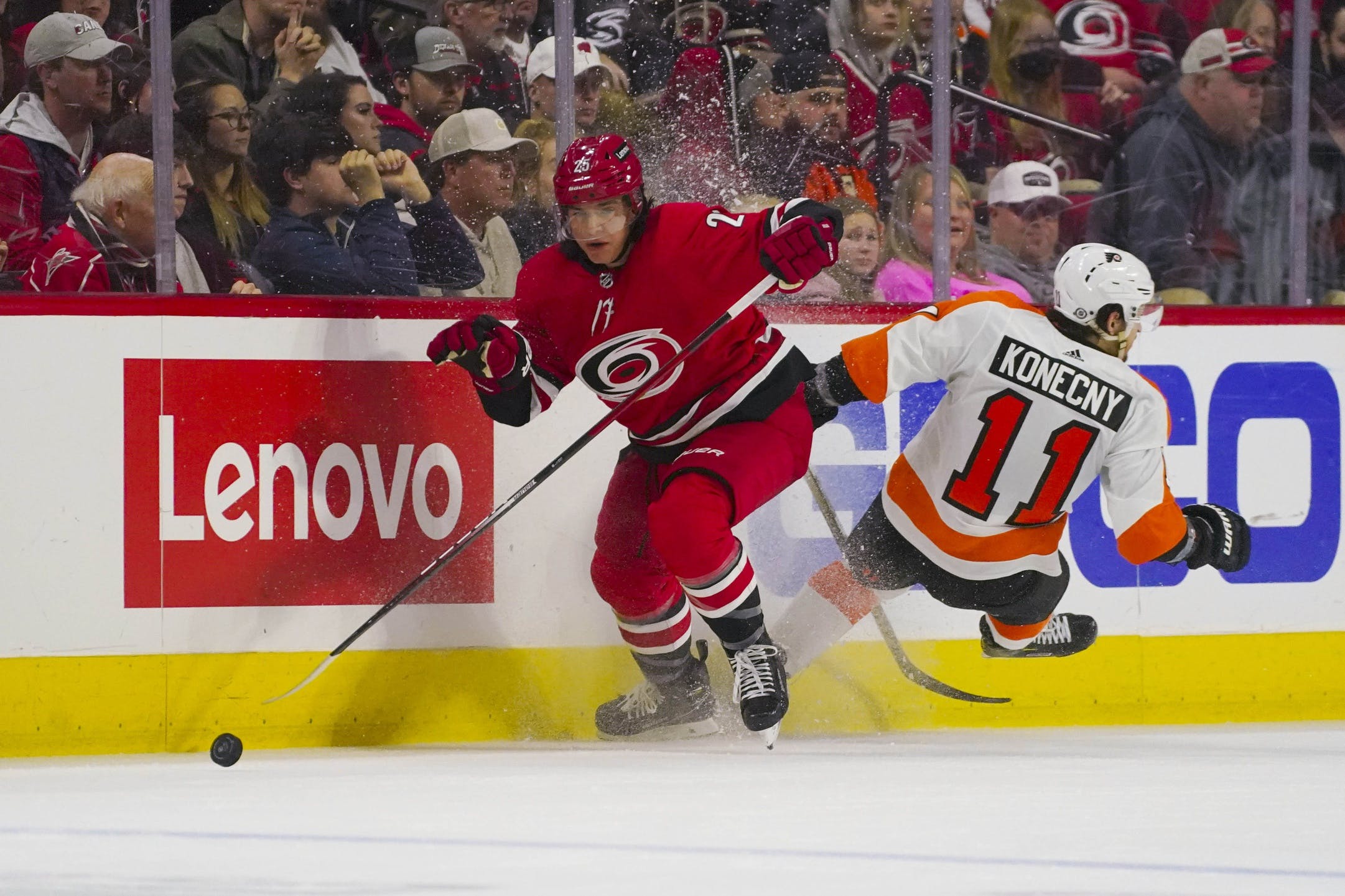 By Stephan Roget
4 months ago
By now, you’ve probably already heard.
The Canucks are “definitely interested” in Carolina Hurricanes defenceman Ethan Bear — and Rangers rearguard Nils Lundkvist, but more on him at a later date — with both Elliotte Friedman and Iain MacIntyre of Sportsnet floating Bear’s name out there in the last 24 hours.
Naturally, this led to us wondering what the Canucks might see in Bear, and what it might cost them to trade for him.

Through parts of four NHL seasons, Bear has put together a hockey resumé that is, admittedly, a little difficult to pin down.
With the Edmonton Oilers, who drafted him at 124th overall in 2015, Bear showed glimpses of being a top-four-quality defender. Since joining the Hurricanes, however, he’s settled more cleanly into a definitively bottom-pair role — albeit on one of the deepest bluelines in the league.

If you do a lot of reading about up-and-coming hockey players, you’re probably sick of hearing them described as “mobile two-way defenders.” Well, tough luck, because that’s exactly how most would describe Bear.
His skating has been a hallmark of his game since his draft year, and is the foundation of that two-way reputation. Bear is said to be good enough on his feet to skate the puck up ice in transition — a deficiency in the Canucks’ current blueline — and quick enough to get back and defend when his forays don’t end in a scoring chance.
Bear also earns high transition marks for his ability to make clean, crisp plays. He’ll probably never be a big point producer at the NHL level, but the play doesn’t die on his stick, either, and he’s generally able to move the puck in a positive direction.
Defensively, Bear is a bit of a mixed bag. He’s not a bad defender by any measure, and his coverage and active stick are two positives in his game. But he does only stand at 5’11”, and he has been known to get physically overwhelmed down low and on the boards.
Bear does block shots and kill penalties effectively, which are both major positives as far as the Canucks are concerned.
His fancy stats from this past season are a sight to behold, but there’s an important context to them.
From NaturalStatTrick, 5v5 play
Bear and his linemates simply dominated possession and control while he was on the ice, but he was generally only on the ice in very specific situations. As we’ve stated before, Bear spent almost all of last season on the Hurricanes’ bottom-pairing, all the while names like Jaccob Slavin and Brett Pesce absorbed all the tough deployment higher up the lineup.
Bear mostly hit the ice against middle-six opposition and started more than his fair share of shifts in the offensive zone. His minutes weren’t quite sheltered, but they were pretty easy.
Still, there was little that Bear could do about his role, and one season doesn’t define a player, anyway. If we hit the rewind back to the 2019/20 season — Bear’s second with the Oilers — we’ll find a defender, still technically a rookie, who arguably served as a playoff team’s top defender.
In that season, Bear played nearly 22 minutes a game, much of it against top-line competition, and still came away from it breaking more-or-less even at 5v5.
The season after, he faltered, and the summer after that he was traded to Carolina, which brings us to the present day.
So, which Bear is the real Bear?
The one that looked like a de facto long-term fit in Edmonton’s top-four two years ago, or the one who Carolina isn’t all that attached to on their bottom-pairing?
The truth, as it often does, lies somewhere in between. Given the Canucks’ interest, we can assume they’re probably leaning toward the more optimistic interpretation, but we can’t discuss their interest much farther without getting into the financials.

It’s fairly obvious to most observers that, if not for their own vaunted depth and the cap constraints that come with it, the Hurricanes would not be looking to trade Bear. He did great in the role that they placed him in last year, and he’d be in pretty much the exact same role this season.
Nevertheless, Bear is on the books for a $2.2 million cap hit this season, after which he will become an RFA. That’s a little bit pricey for a bottom-pairing defender, especially when the Hurricanes are loaded up with quality everywhere else on their blueline.
Carolina’s top-four is set with Slavin, Pesce, Brady Skjei, and the newly-acquired Brent Burns, all of whom are signed at $5.3 million or less.
Beyond that, Bear is competing for a spot with two younger, cheaper RHDs in Dylan Coghlan and former Canuck Jalen Chatfield. Then there’s Calvin de Haan, in camp on a PTO, and current contract holdout Joey Keane.
That’s a veritable bevy of bottom-pair RHDs to choose from, and Bear makes more than double what any of the others do. Even if he’s the best of the bunch, moving him looks like an easy way for the Hurricanes to cut cap.
But Carolina isn’t the only team looking to shave a little salary off the top. The Canucks find themselves in nearly the exact same financial situation. Therefore, any trade that did go down would have to be balanced very carefully.

The Hurricanes would absolutely love to get a pick or prospect back for Bear, thus freeing up a full $2.2 million in cap space. And if they can get that from another team, they should totally go for it. But they won’t (or shouldn’t) get such an offer from the Canucks, who cannot even afford to absorb Bear’s whole hit without some clever pre-season roster shuffling.
But depending on the health of Ondrej Kase and the Training Camp performances of some key prospects, the Hurricanes could also be in the market for another top-nine forward, and that’s something that the Canucks have in excess. A forward-for-Bear trade could make some sense.

This rumour has been making the rounds on twitter, and it’s not hard to see why. Nils Höglander struggled through a sophomore slump last year, appears to have clashed with coach Bruce Boudreau, and doesn’t currently have a spot in the Canucks’ own top-nine.
All that being said, trading Höglander now would constitute “selling low” on a player that is still just 21 years old and is just one year removed from a stellar rookie campaign.
Trading Höglander eventually, due to an overabundance of forwards, makes some sense. Doing so when his value is at its lowest, and in exchange for a bottom-pairing defender that is four years older, reeks of asset mismanagement. Even if Bear came with some retention to make the money work, a serious sweetener would also need to be attached to make the return anywhere near worth giving up on Höglander’s potential.

If Carolina is willing to make this swap, the Canucks should fire up the fax machine the second they get off the phone. The money works, with the Hurricanes taking back an extra $400K on Jason Dickinson, though that could probably be mitigated via retention if they really needed it.
The Canucks would be losing a superfluous forward who doesn’t really have a spot in the opening night lineup, never mind in the top-nine. They’d be moving from an area of depth to their greatest area of organizational need.
But for all those same reasons, the Hurricanes should say “no” to such an offer. Dickinson doesn’t bring anything to the table that their own, cheaper depth forwards don’t, and they’d be better off hanging onto Bear for depth than exchanging him for Dickinson.

Now, this one might just work for everyone.
In Tanner Pearson, the Hurricanes would get a forward capable of playing on any forward line, and one with ample playoff experience. Pearson is reliable, he’s great in the room, and he’s a proven winner. One has to think he’d be an instant favourite of coach Rod Brind’Amour.
Of course, Pearson does carry a cap hit that is $1 million over and above that of Bear, and said contract has an extra year on it.
If the Canucks were willing and able to retain some on Pearson — maybe not that full million, but close — we think that the Hurricanes would be a lot more amenable to this trade. Whether Bear is worth that extra cost remains to be determined, but if he can work his way into a top-four role for the Canucks, few would mind an effective $3.2 million cap hit.

No, Travis Dermott is not a forward, but we’re throwing this one last idea out there all the same.
Dermott and Bear are actually a fair bit similar, both the same age and having displayed greater potential in the past before settling into a bottom-pair role.
At this stage, Bear is probably the more effective of the two and retains the higher ceiling, but they’re in roughly the same ballpark.
In Dermott, the Hurricanes would get someone with a cheaper cap hit and more versatility.
In Bear, the Canucks would get someone who is actually right-handed and someone more built for the work they need done this season.
Maybe the two teams propose a simple one-for-one transaction and leave it at that.
It all depends, of course, on what the market can bear.
Content
Recent articles from Stephan Roget