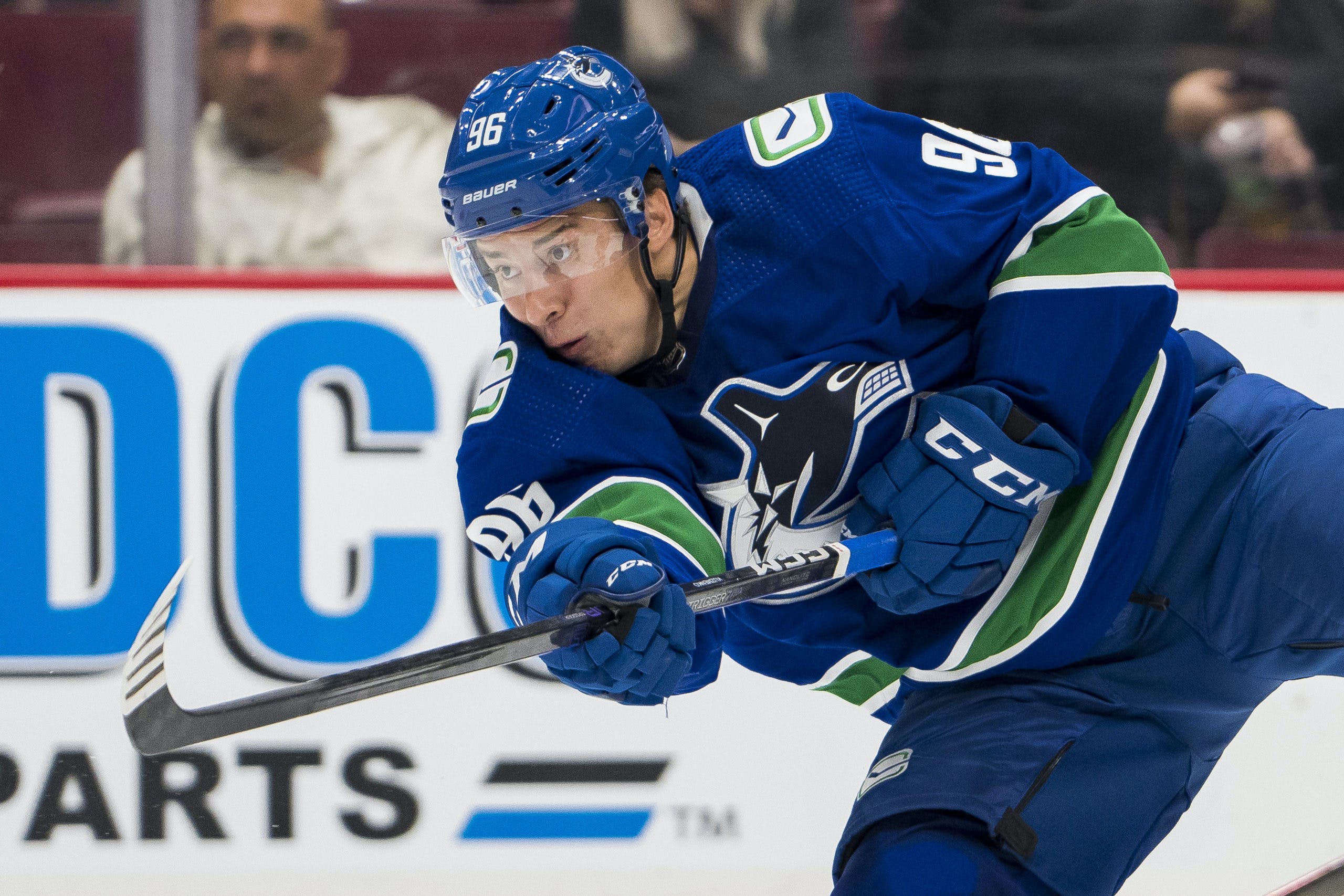 By Bill Huan
2 months ago
Last week, we discussed why the Canucks need to trade multiple wingers in order to kick off a successful rebuild, but Andrei Kuzmenko may be the one exception who the team should consider re-signing.
Having piled up 16 points in just 19 games already, the Russian has largely exceeded expectations and management could indeed bring him back on a bargain deal if everything breaks right.
That is a big “if”, though, considering some of Kuzmenko’s concerning underlying numbers and defensive play. Fortunately, there’s still plenty of time for him to improve his overall game, and the option of a trade is always available if that doesn’t happen.
So, let’s take a look at Kuzmenko’s game and how his progression this year could determine whether he is re-signed or dealt at the deadline.

Elias Pettersson and Kuzmenko have arguably been the team’s most dynamic duo this season, and their five-on-five numbers together have been off the charts.
However, Kuzmenko is putting on an Oscar-worthy Jeykll and Hyde performance when looking at his metrics without Pettersson.
This isn’t to say that the winger’s success is solely a product of Pettersson, especially considering his high hockey IQ and ability to get open.
A large number of his goals have been tap-ins, which might sound boring, but being able to put yourself in those high-danger positions is an art unto itself. Take a look at the first goal he scored against Anaheim, which resulted in an eventual hat trick.
It’s very subtle, but notice how Kuzmenko recognizes that two Ducks defenders are focused on Horvat so he immediately slides back for an easy tap-in. This isn’t a one-off, either, as he’s currently third among all Canucks skaters with 59 high-danger chances for at five-on-five, only behind Pettersson and renowned sniper Oliver Ekman-Larsson (seriously, what?).
It’s also worth noting that Pettersson’s numbers nosedive too when he’s without Kuzmenko, so they have a mutually beneficial partnership instead of a lopsided one.
Even so, there’s no doubt that Pettersson is the engine of any line regardless of who he plays with, while Kuzmenko has proven to be more of a supporting piece. The Russian’s main wart is undoubtedly his defensive awareness since he tends to lose track of his man, which often results in high-danger scoring chances against the Canucks.
The numbers back it up, too. Even with Kuzmenko largely stapled to Pettersson’s wing, the team is letting in 2.87 goals per 60 with him playing, which is the fifth-worst rate on the Canucks among forwards. That figure is also in the 36th percentile league-wide among all forwards who have logged at least 200 minutes at five-on-five, which would be much worse if he didn’t play alongside Pettersson and Ilya Mikheyev, the team’s best defensive winger.
The good news, though, is that Kuzmenko’s defensive flaws are mostly caused by a lack of awareness rather than effort. With his high hockey IQ and the fact that he’s still adjusting to the North American game, it’s realistic to expect his two-way game to improve as the season goes on, which is an underrated storyline to monitor.
Depending on his progression, the Canucks have a unique opportunity to either trade or re-sign him. The latter option would be very intriguing given his lack of NHL experience, so let’s take a look at some recent comparables to get a better sense of potential outcomes.

Over the past five seasons, only Nikita Gusev, Alexander Barabanov, and Mikheyev stand out as comparables to Kuzmenko as Russian wingers who made the move to the NHL without playing in the league previously, and they all produced at different rates during both their final KHL season and first full year in North America.
On a per-game basis, Kuzmenko currently leads the pack in production, but the sample size is too small to make any definitive conclusions from that. The more interesting thing to note is the contracts that the other players signed and how they produced in future seasons.
Like Kuzmenko, who’s making $950,000, both Barabanov and Mikheyev inked one-year minimum deals worth $925,000 when they came overseas. Gusev signed the same deal with Vegas in 2019 but was traded to New Jersey just a few months after and was awarded a two-year, $9 million ($4.5 million AAV) contract before playing a single NHL game.
Interestingly, Gusev is also the only one who couldn’t stick in the league even after putting up the best numbers out of the three during their first season. Meanwhile, Barabanov and Mikheyev have increased their production this year (12 points in 18 games for Barabanov, and 11 points in 17 games for Mikheyev) and established themselves as quality middle-six wingers. In terms of contracts, Barabanov signed a two-year, $5 million ($2.5 million AAV) deal after his first season while Mikheyev was rewarded with a two-year, $3.29 ($1.645 million) contract after his first year in Toronto.
If Kuzmenko keeps up his current pace and finishes the year with over 60 points, he could conceivably command a medium-term deal worth between $4-4.5 million annually. Whether the Canucks should be the team to offer that depends on the progression of his defensive game and play away from Pettersson. If both things improve, the Canucks will have a unique opportunity to sign him to a potential steal of a contract; the team will have leverage in negotiations due to the winger’s lack of NHL experience, and the opportunity of continuing to play with the Swede could be a selling point to him as well.
More importantly, any progression in Kuzmenko’s game this year could indicate that he’s got more room for improvement in future seasons. At 26, there likely isn’t any development left in his game, but it’s entirely possible Kuzmenko can increase his production just from getting more acclimated to North American hockey, similar to how Mikheyev and Barabanov have upped their scoring too. If that happens, then locking him up at a $4-4.5 million annual rate could become a steal as soon as next season.
Of course, there’s always the risk of Kuzmenko struggling to stick in the league like Gusev, but there are a few reasons to be more optimistic about the Canuck winger’s future. First, as bad as Kuzmenko’s defence has been at times, he’s still been better than Gusev. The latter’s diminutive size contributed largely to his struggles, and Kuzmenko’s a lot sturdier even if he’ll never be the tallest player on the ice. As mentioned before, Kuzmenko’s work rate and hockey IQ also suggests that he can improve in his own end, and having both Mikheyev and Vasily Podkolzin on the team should make it easier for him to understand defensive coverage better too.
On the other hand, if Kuzmenko’s all-around game doesn’t improve, the Canucks can always trade him at the deadline. The playoffs are already a pipedream at this point, so the club can continue playing him alongside Pettersson so that he maintains his current level of production, and Kuzmenko should be able to net a mid-round pick if that happens.
Ultimately, Kuzmenko should be a positive asset as long as management doesn’t sign him to a bloated contract. If his game continues to expand, the Canucks can use their leverage to sign him to a good deal, and if it doesn’t, the team can still receive something in return for him via trade.
Stats courtesy of Natural Stat Trick and Evolving-Hockey.
Editorials
Recent articles from Bill Huan