Which Vancouver Canucks should get an ‘A’ on their jerseys for 2021/22? 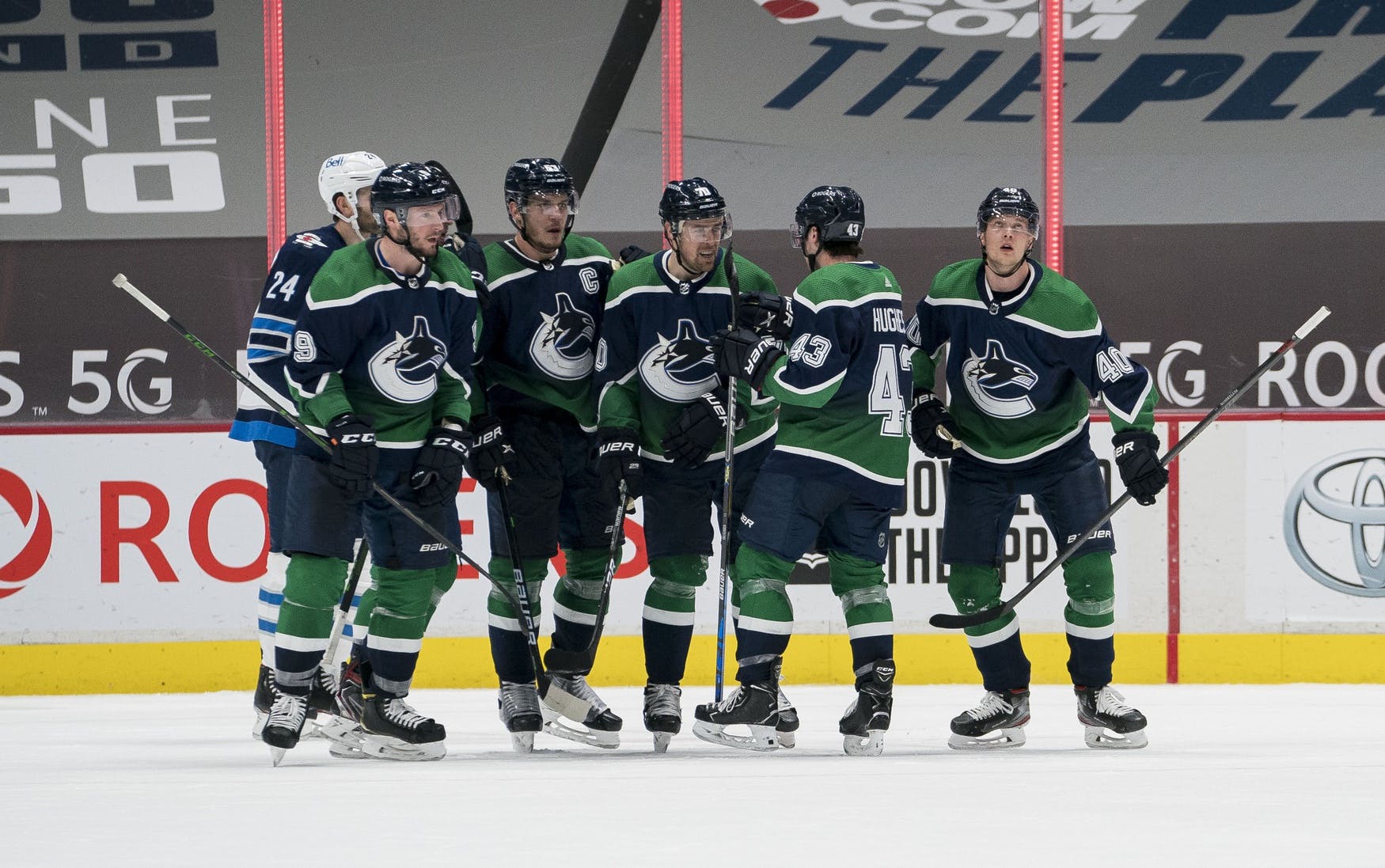 By Stephan Roget
1 year ago
Over the past three-ish years, and since the conclusion of the 2017/18 season, the Vancouver Canucks have watched four full-time letter-wearers depart via retirement or free agency.
Henrik and Daniel Sedin were first. Then Chris Tanev flew the coop last summer, and now in 2021, even Alex Edler has gone Hollywood.
Only captain Bo Horvat and alternate captain Brandon Sutter remain.
It’s not really a problem, an issue, or even an unexpected occurrence in a team transitioning from one core to another.
But it is something the Canucks will have to rectify before the 2021/22 season begins, and that does entail making a choice — and at least one stitch-job.
Assuming Horvat and Sutter retain their official leadership roles, the Canucks will need to name an additional alternate captain. They could, however, also decide to go back to the “two home A’s, two road A’s” system, and that might be a wise idea given Sutter’s propensity to miss games.
Either way, there’s going to be at least one new letter-wearer in town, and possibly as many as three.
So, who’s it going to be?

There were those who were ready to hand Miller a letter the moment he spoke out against the NHL’s preposterous post-COVID return-to-play plan for the Canucks — though it’s far from the only reason he’s deserving. Since arriving in Vancouver, he’s been the team’s most consistent scorer, and he’s becoming famous for his pre-game pump-up antics. Physical, gutsy, and willing to stick up for teammates, Miller also possesses the traditional set of intangibles most associate with hockey leadership.
There are, however, a few strikes against him. Miller has only ever worn a permanent letter once in his career, when he was an alternate captain for the USA at the 2013 WJC. He’s only under contract for two more years, and then there’s all those turnovers — and the visible on-ice frustration that followed them.
All in all, Miller looks like a fine candidate for an ‘A,’ and perhaps the most likely of all, but not enough so that he’s a definitive choice.

As the franchise centrepiece, Pettersson automatically enters the discussion for a leadership position. His recent comments about wanting to play somewhere he can win may have ruffled some feathers, but they’re a bonus when it comes to potential captaincy — good leaders demand more from their teammates.
Pettersson has never worn a permanent letter in his professional hockey career, but that’s not entirely surprising, because he’s almost always been one of the youngest players on his team. His consistent efforts to improve himself and his game speak louder, as does his genuine reputation as an A-plus human being. This is a player who has already earned the respect of teammates and opponents alike.
Pettersson may not be next in line for a letter, but he’s close, and one day he will carry on the Vancouver tradition of strong, semi-silent Swedish leadership.

It’s rare for a brand-new player to pick up a letter upon joining their new team, but it’s also rare for that player to be coming off a three-year captaincy run with their old team. Such is the case with Ekman-Larsson, who wore the ‘C’ for the Arizona Coyotes for the past three seasons, and the ‘A’ for four seasons before that. In fact, Ekman-Larsson had been wearing a letter for that franchise for so long, he only missed out on being the alternate captain of the Phoenix Coyotes by a single year.
Ekman-Larsson has also captained Sweden at the World Championships, and he even earned a letter for Leksands IF of the Allsvenskan as a teenager. Clearly, he’s a born leader, and so it wouldn’t be surprising in the least to see him sport an ‘A’ for the Canucks right away. The only mark against him is his newness, and the potential for ruffled feathers if he “leapfrogs” someone who’s been here longer.

Boeser’s arrival in Vancouver came between that of Horvat and Pettersson, two players already identified as primary leaders of the franchise, and his own leadership chops seem to have been lost in the shuffle — but they shouldn’t be discounted. In a team full of good people, Boeser is the best person, and though his affable nature isn’t exactly the classic image of a captain, it’s clearly something that his teammates enjoy and benefit from.
Boeser wore an ‘A’ in his final season with the University of North Dakota. Of any of the candidates on this list, he’s been around the longest — so, if seniority and pleasantness count for anything, he deserves consideration. But Boeser also put the team on his back for long stretches during 2021, perhaps the most difficult season in franchise history. That should also count for something.

Like Ekman-Larsson, Schenn is just joining the team, but unlike Ekman-Larsson, he’s been here before. About half of the players on the roster right now played with Schenn during his first Vancouver stint, so he’s not really “new” — and what he’s been up to in the interim is what really matters here.
Schenn is coming off two consecutive Stanley Cups. If that’s where the Canucks eventually want to get to, Schenn is the player most capable of showing them the way. Schenn has worn an ‘A’ for the Toronto Maple Leafs before (and the Kelowna Rockets), but that was more than a decade ago.
If anything, Schenn’s status as an extra defender and frequent healthy scratch might prevent him from actually receiving a letter. Regardless, he’s going to be an important voice in the room and a part of the leadership core for the next two seasons.

Of all the skaters who hit the ice for the Canucks in 2021, Pearson is one of only two under contract for longer than two more years. That continuity alone makes him a candidate, even if he’s not the first one many would think of.
Like Schenn, Pearson has Cup-winning experience to share. But he’s never worn a letter before, and it might seem an odd choice to give him one at this juncture in his career. Pearson is, for better or for worse, a complementary player more than anything, and that will probably be true of his leadership contributions, too.

Hamonic returns for his second season with the Canucks. In his first, he demonstrated a willingness to block shots, throw hits, and defend his teammates, all of which are usually considered bonuses when it comes to calling oneself a captain-type.
Hamonic has worn an ‘A’ before, in his fourth season with the New York Islanders, but that only lasted a year. As he ages and his overall role lessons, there are probably better candidates to actually wear a letter, but Hamonic will remain an important voice and a valued teammate.

By most measures, Motte is the perfect candidate to sport an ‘A.’ He’s all hustle and motor, leads by example, and has already demonstrated an ability to boost his teammates in the postseason. His bravery in speaking out about his mental health speaks volumes about his qualities as an individual. He appears to be a universally beloved person.
But Motte is only signed for this year, and there’s no guarantee that he’ll be back. Furthermore, some additions to the forward corps will likely relegate him to the fourth line for much of the season. He wouldn’t be a bad choice or an unpopular one, but it still seems unlikely.

We mentioned that Pearson was one of two skaters who played for the Canucks in 2021 and are signed beyond 2022/23, and Myers is the other one. He’s a player who competes hard, though oftentimes to a fault. He’s more than a little haywire on the ice, and that might be a reason he hasn’t worn a letter in his lengthy career. If you’re looking to someone on your bench to instill stability and calm, Myers simply isn’t it.
As this market’s go-to whipping boy, it really wouldn’t be fair to saddle Myers with a captaincy right now. Instead, let him focus on just being the best Tyler Myers he can be.

It seems strange to not mention a franchise cornerstone like Hughes on a list like this, but he just doesn’t seem ready for a definitive leadership role, and might not ever be. Plenty of players are quiet and reserved, but Hughes is downright shy and bashful, and it’s difficult to imagine him ever standing up in the dressing room to rally the troops.
There’s room in hockey for strong, silent types to lead, and maybe that will be Hughes’ role one day. He did sport an ‘A’ for the USA World Juniors in 2019. But leadership is really more of a Jack thing, and there are more than enough other candidates available that this isn’t something Quinn should have to worry about right now.
Folks, this isn’t a WDYTT, but we care what you think anyway! Feel free to sound off in the comments about who you would select as the next alternate captain(s) of the Vancouver Canucks.
Uncategorized
Recent articles from Stephan Roget