What if the Vancouver Canucks didn’t make the Bertuzzi for Luongo trade? Part 3 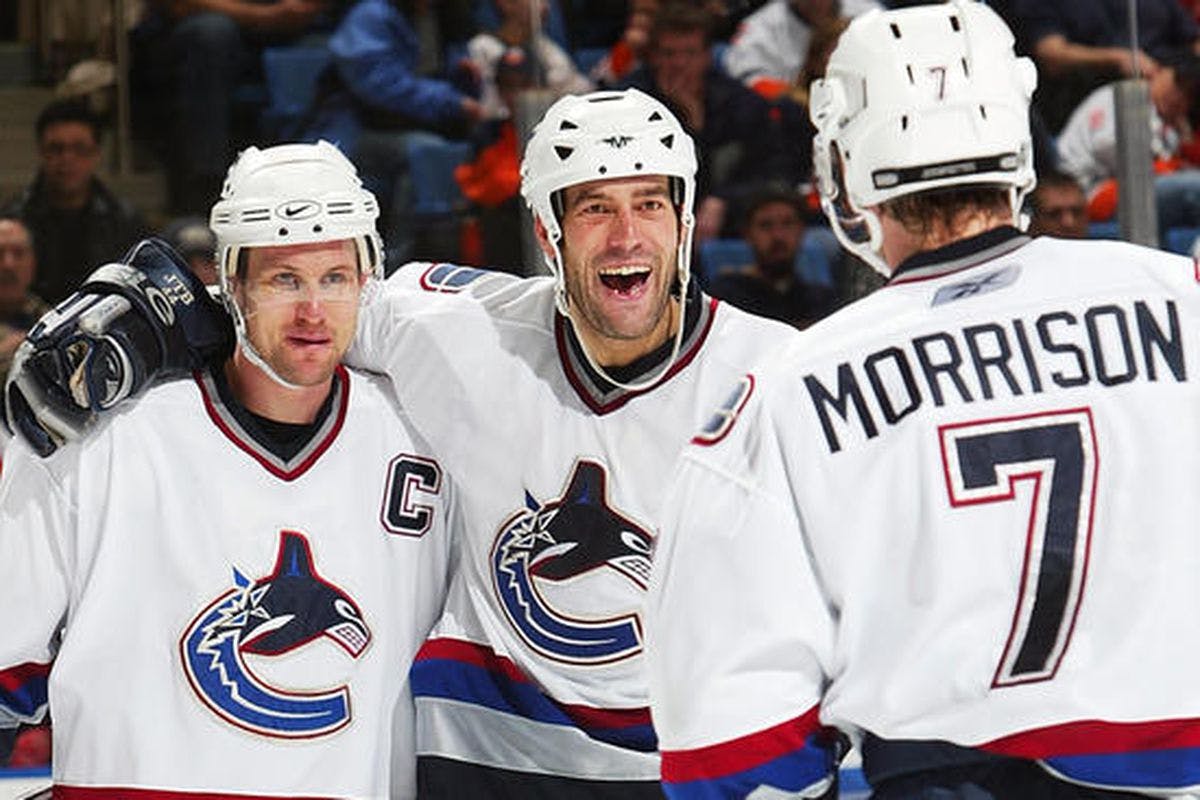 By Bill Huan
10 months ago
Welcome back to part three of our series on the Luongo-Bertuzzi trade!
To briefly recap, the Canucks pivoted and traded Bertuzzi to Anaheim for Jean-Sebastien Giguere in 2006 after the Panthers refused to part with Luongo. Giguere went on to have a few successful individual seasons for the Canucks, but unfortunately, his best years in Vancouver coincided with the team missing the playoffs.
Luckily for the club, Cory Schneider was waiting in the wings and made a smooth transition into the starters role and helped the Canucks make the Western Conference finals in the 2010-11 season. The team would go on to make a few more second-round appearances before bottoming out in 2015-16, which helped them land the second overall pick and select Patrik Laine.
So, it’s now time to pick up where we left off.

Following the 2016 draft in which the team adds Laine, the club now turns its attention to free agency.
Kesler’s frustrating 2015-16 season results in him leaving for greener pastures, and the team decides against re-signing Christian Ehrhoff too. With Mason Raymond’s contract expiring a year earlier, the Canucks now have $17.5 million of cap space to use.
Gillis knows that his job is in serious jeopardy if the team doesn’t make the playoffs in the upcoming season, so he decides to make a few win-now moves by signing Eric Staal (four years, $16 million), Milan Lucic (six years, $36 million), and Kris Russell (three years, $10.5 million) all to big deals.
Unfortunately, those decisions backfire spectacularly.
Only Staal provides over one win in value as both Lucic and Russell immediately show signs of alarming decline. Schneider, the team’s former MVP, also starts to battle hip injuries that’ll nag him for the remainder of his contract. Without the team’s star goaltender playing up to expectations, the Canucks actually end up with three fewer points than in real life, although this doesn’t make a difference in the standings with Colorado being historically bad that season.
The only bright spot is the play of Laine, who scores over 40 goals and provides Canucks fans with some hope for the future. The team still finishes second last in the league though and winds up with the fifth overall pick in the 2017 draft. Before making their selection, both Alain Vigneault and Mike Gillis are fired and are replaced by Travis Green and Jim Benning, respectively.
Sorry, Canucks fans; Benning’s impact on the franchise runs so deep that he becomes the team’s GM no matter which universe we live in.
With that said, the Benning regime in this alternate reality starts off with a bang since Elias Pettersson is still chosen fifth overall. Ironically, the signings that Gillis made in the previous offseason have now hamstrung Benning from making moves of his own (something something turntables).
Going into the final years of the Sedins’ contracts, there sadly isn’t any chance of this team making the playoffs. Fans do get a glimpse into a brighter future, though, as Brock Boeser has an electrifying rookie season and finishes second in Calder Trophy voting, one year after Laine came up just short against Auston Matthews.
The most alarming part about the 2017-18 season is the continued decline of Schneider, as the former Vezina-calibre netminder posts his second consecutive campaign with a save percentage below 0.910%. Even so, the Canucks actually manage to gain a point on their real-life counterparts but remain 26th in the league standings.

With no change in the standings, the Canucks are able to select Quinn Hughes once again with the seventh overall pick in the 2018 draft and have the same nucleus in place as they currently do. In free agency, Benning decides to use what’s left of his cap space on a goaltender and proceeds to take a flyer on Robin Lehner by inking him to a one-year, $2 million deal.
Even after back-to-back seasons in which the team finished at the bottom of the league, Canucks fans are excited about the future of the franchise with Pettersson set to make his debut. The young Swede goes on to surpass even the wildest expectations by running away with the Calder trophy and proving capable of becoming the team’s new franchise centre following the retirement of Henrik Sedin.
In net, Lehner has an extraordinary season and is voted as team MVP. His play helps add two and a half wins to the Canucks and allows them to finish 19th in the league with 86 points, which is only four points out of a playoff spot. The team’s new placement lands them the 13th picks in the 2019 draft, which they use to select Cole Caulfield.
The biggest challenge of Benning’s tenure, however, awaits him in free agency. Boeser, Laine, Lehner, and Alex Edler are all due for new contracts but the team’s cap sheet is still littered with inefficient deals. This forces Benning to trade Schneider away with just a year remaining on his deal while also attaching a 2019 third-round pick as an incentive.
With Russell’s contract also expiring, this allows the team to sign all four of their big-ticket players:
Boeser: three years, $17.625 million ($5.875 AAV)
Laine: three years, $21 million ($7 million AAV)
Lehner: five years, $25 million ($5 million AAV)
Edler: two years, $12 million ($6 million AAV)
Having locked up their core means that the Canucks don’t have any leftover cap space to work with, meaning that the J.T. Miller trade and Tyler Myers signings don’t take place. Funnily enough, Benning is able to take a more methodical approach given that he’s still relatively new to his role, and the Lucic contract has essentially replaced Eriksson’s, even though it was signed by Gillis.
Even without the contribution from Myers and Miller, the Canucks continue their ascent by finishing with 81 points in the regular season, which is three more than in actuality and places them fifth in the Western Conference. Going into the bubble playoffs, they are matched against the Blackhawks and proceed to beat them in four games.
The Golden Knights, however, prove too much to handle in the first round and the Canucks get sent home after six competitive matches. The team is happy with their performance, though, as they made it into the postseason faster than most expected and put the league on notice in the process.

Having kept their 2020 first-round pick, the Canucks now select (wait for it…) Braden Schneider. Even though Hughes and Chris Tanev formed one of the best defensive pairs in 2019-20, the club knows that they need a longer-term partner for their star defenceman, and who better can fit that role better than a defensive-minded right-hand shot like Schneider?
Speaking of Tanev, the team decides to re-sign him to a four-year, $17 million ($4.25 million AAV) deal. Troy Stecher also stays on a hometown discount by inking a two-year, $3 million contract ($1.5 million AAV). With their core defenders locked up, the Canucks no longer need to trade for Nate Schmidt or sign Travis Hamonic anymore, both of whom provided the team with replacement level value anyway.
Benning also decides to take a flyer on Erik Haula to replace Staal as the team’s second-line centre and signs him to a one-year, $1.8 million deal.
Unfortunately, all of this roster turnover isn’t enough to elevate the Canucks into a playoff position. Pettersson’s season-ending wrist injury is just too much to overcome, and the team still finishes last in the Canadian Division by tying Ottawa with 51 points.
However, Benning’s seat isn’t warm enough for him to make any desperate win-now trades, so the club decides to stay the course and run it back with its current core group. This means that the Canucks are able to keep the ninth overall pick in the 2021 draft and select Dylan Guenther, who, along with Caulfield, are able to keep the team’s prospect pipeline stocked.
Draft aside, the biggest storyline of the 2021 offseason is the pending second contracts of both Hughes and Pettersson. Without much cap space left, Benning is forced to trade Lucic along with second-round picks in both 2021 and 2022 to dump his contract.
Afterwards, he signs Pettersson to the same three-year, $22.05 million contract ($7.35 million AAV) but rewards Hughes with a six-year, $49.5 million ($8.25 million AAV) deal since the young blueliner doesn’t struggle defensively with Tanev still beside him. Haula is also brought back on a two-year, $5 million ($2.5 million AAV) contract after a decent showing the year before.
The Canucks expect to make the playoffs going into the season but struggles for much of the year, accumulating five fewer points than they currently have. Neither Green nor Benning is let go, so the team doesn’t receive the magical “Boudreau Bump” to elevate them into a fringe playoff position. Even so, the club isn’t bogged down by long-term inefficient contracts like OEL’s, so the future is still seen as being bright for the franchise.
That’s it for this what-if series! Like our previous one on Schneider, the lesson that can be taken away is that the moves you don’t make are oftentimes the best ones. Without the OEL deal, the Canucks’ future cap sheet is a lot easier to navigate and the path to contention is much clearer.
Next week, we’re going even further back in time and taking a look at another franchise-altering trade. Stay tuned!
All stats courtesy of Evolving-Hockey.
Uncategorized
Recent articles from Bill Huan