What if the Canucks hadn’t parted ways with Trevor Linden and embarked on a slower rebuild? 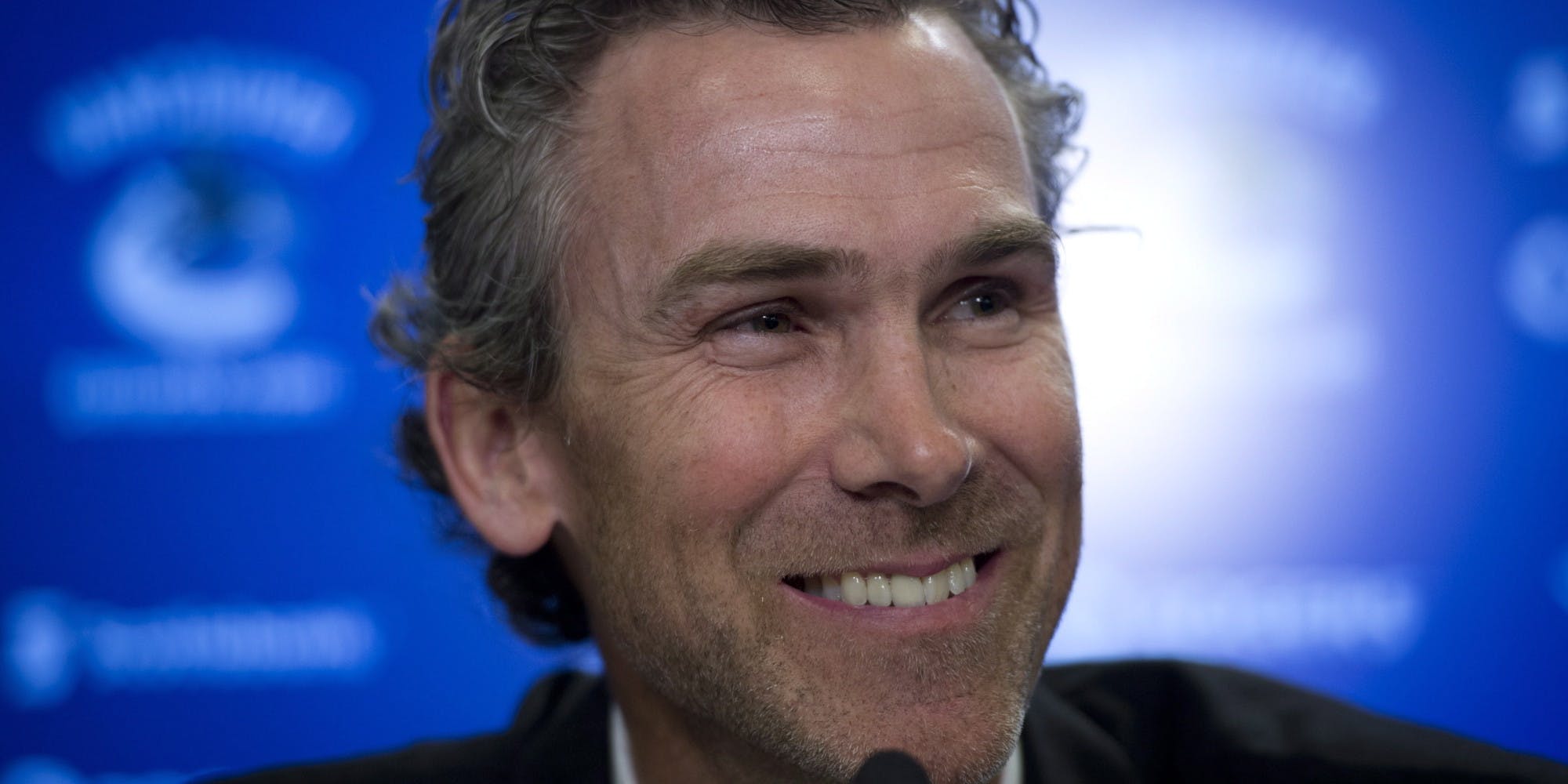 By Bill Huan
9 months ago
Welcome to the first article of a new “what if?” series where we will be taking a look at how certain events in Canucks history might’ve altered the team’s trajectory if something different had happened.
There are an endless number of topics that can be covered, and we will be going through the Canucks’ entire existence, from the first iteration of the team (“what if the Canucks had won the 1970 draft lottery?”) to more recent events (“what if the Canucks hadn’t traded Cory Schneider?”).
Some topics will require multiple parts, and we will try and provide the likeliest outcome from different scenarios to be as unbiased as possible. However, many things will still be left to personal opinion, which is what makes this so fun; everyone will have different interpretations of certain events, and the debates that it’ll generate will be fascinating to follow.
In terms of injuries, we will operate under the assumption that players are still going to get hurt at the exact same time and in the same manner they did in real life, unless the event we’re covering specifically changes that. In an alternate universe, those injuries might not have happened, but something else might also occur, so it’ll be simpler just to go with the things that actually happened.
Today, we will be looking at what might’ve happened if the team didn’t “amicably part ways” with former president Trevor Linden and embraced the more methodical rebuild that he reportedly wanted. For more recent what-ifs, we will be using Evolving-Hockey’s Wins Above Replacement (WAR) stat that estimates how many wins a player contributes to their team to objectively predict where the club would’ve finished in the standings following roster changes.
Let’s get started.

After finishing 28th and 29th, respectively, in the two previous seasons, then president of hockey operations Trevor Linden finally admitted that the Canucks were in a rebuild in April of 2017.
Just a year later, Linden parted ways with the team, with reports releasing soon after that he wanted to approach the rebuild in a different manner than the rest of the organization. With the Canucks frivolously trading away draft picks in the following seasons for veterans that helped the team in the short term, it seems clear that Linden wanted a slower, more methodical approach to rebuilding, while Jim Benning and perhaps even Francesco Aquilini preferred a quicker turnaround.
But what if the Canucks had executed Linden’s vision instead? What if they had been more patient and didn’t give away future assets? As you’ll soon see, the club would have a lot more prospects in its pipeline, with the on-ice results likely being surprisingly similar to what happened in real life.

Since Linden made his departure following the start of free agency, the Canucks still sign Antoine Roussel and Jay Beagle to their big contracts. As a result, the regular season plays out in the exact same manner, with both the Tanner Pearson and Jonathan Dahlen trades still happening at the deadline.
However, with the team looking to accumulate more assets, they deal both Ben Hutton and Markus Granlund away for a pair of 5th round picks. Since Hutton and Granlund are replacement level players, the team’s record stays the same at the season’s end and they still end up selecting Vasili Podkolzin with the 10th overall pick.

Outside of perhaps drafting Podkolzin, the biggest story of the Canucks’ 2019 offseason was the trade for J.T. Miller. But without the added pressure to make the playoffs, Benning doesn’t pull the trigger, meaning that the club will keep Marek Mazanec, its 2019 third-round pick, and also its 2020 first-round pick.
The Tyler Myers and Micheal Ferland signings still happen, though, since the Canucks would like to surround their young talent with some veterans and also make them harder to play against.

Regular season and qualifying round

With Ferland injured and Miller not on the team, the club decides to keep Sven Baertschi on its roster instead of sending him down to the AHL. The Swiss winger manages to have a relatively healthy season but doesn’t move the needle much.
At the trade deadline, Benning considers trading away Chris Tanev and Jacob Markstrom, but decides to keep both players since the offers they receive are lacklustre. The team is also still within reach of a potential playoff spot, and although they’re not in a rush to make the postseason, they still value the chance to play meaningful games down the stretch.
Unsurprisingly, the Tyler Toffoli trade doesn’t take place, so the club gets to keep Tim Schaller, Tyler Madden, a 2020 second-round pick, and a conditional 2022 fourth-round pick. COVID, unfortunately, is so transmittable that it still happens in this alternate universe, and the Canucks end the shortened season as the 21st ranked team after losing five points without the combination of Miller and Toffoli.
Now the 10th seed in the West, Vancouver faces off against Calgary in the qualifying round and loses in a close five-game series. The only other change is that eight-seeded Winnipeg defeats Minnesota before losing to Dallas in the first round, and Calgary goes on to beat St. Louis and proceeds to lose to Vegas in the Western Conference semi-finals. The rest of the playoffs are unchanged, with Tampa Bay still winning against Dallas in the Stanley Cup Finals.

After being eliminated in the qualifying round, the Canucks are one of eight teams that has a chance of winning the first overall pick in the 2020 draft, but the Rangers still walk away with the prize. Since they’re now occupying the position that Minnesota was in, the Canucks select Marco Rossi with the 9th overall pick. In the second round, the club picks goaltender Joel Blomqvist with the 39th pick, who was highly regarded by Ian Clark.
Without having to worry about Toffoli’s impending free agency, the Canucks elect to focus on re-signing many of their own players. This results in a four-year, $17 million ($4.25 million AAV) deal for Tanev and a two-year, $3 million ($1.5 million AAV) contract for Troy Stecher as they both take slight discounts to stay in Vancouver. Markstrom still goes to Calgary to make way for Thatcher Demko, and Braden Holtby signs for the same deal that he did in real life (two years, $4.3 million AAV).
The gaping hole that Miller leaves on the wing is still too evident though, so Benning inks Mikael Granlund to a one-year, $4 million deal. Granlund, who was coming off a disappointing season in Nashville, wants to regain some of his value and is sold on the idea of playing on a young team with lots of offensive potential.
Since Tanev and Stecher have both been brought back, there’s no need to trade for Nate Schmidt or sign Travis Hamonic anymore. With that said, Jake Virtanen is still rewarded with a two-year contract at an even higher AAV ($2.65 million per year) since his struggles in the bubble weren’t as noticeable without the Canucks going on a long playoff run.

With many of the team’s free agents being brought back, the Canucks maintain their chemistry and outperform their real-life counterparts. In fact, they’re in a playoff spot at the trade deadline (but with games in hand) so Benning once again decides to keep pending UFA Tanner Pearson.
The COVID outbreak still occurs though, and Adam Gaudette gets traded for Matthew Highmore. In the end, the team misses the postseason by just two points, adding close to three wins to their record with the moves made in the 2020 offseason.

Having finished 20th in the league with 56 points (as opposed to 50 in actuality), the Canucks manage to land the 12th overall pick in the 2021 draft and select Matthew Coronato. The team doesn’t sign Tucker Poolman or trade for Oliver Ekman-Larsson and Connor Garland because they’re perfectly content to keep Loui Eriksson, Beagle and Roussel until all their deals expire next summer.
Without all the turmoil that happened the previous year in real life, Holtby stays on the team and actually goes through a small resurgent. Alex Edler also re-signs for one year at $3 million and Granlund is rewarded with a four-year, $20.6 million ($5.15 million AAV) contract too. With Granlund staying, the club decides to let Pearson test free agency.
A few things stay the same, though: Virtanen is bought out once again and the Jason Dickinson trade and signing still takes place. Meanwhile, Elias Pettersson inks the same deal having been injured for most of the previous season. On the other hand, Quinn Hughes gets a slight raise since his defensive game doesn’t take a dip with Tanev as his partner. The 22-year-old signs a 6 year, $49.5 million ($8.25 million AAV) deal instead, and the only other player added to the backend is Brad Hunt.
With just a bit over a million left in cap space — Benning’s propensity to spend to the cap spans the entire multiverse — and still lacking credible middle-six wingers, the team elects to take a flier on Michael Bunting and signs him to a two-year, $2.25 million ($1.125 million AAV) deal. This also means that Brandon Sutter needs to find a new home since the Canucks will still have Jay Beagle as their fourth-line centre.

Before the start of the year, both Eriksson and Roussel are buried in the minors, but Beagle stays with the big club. With the current season not even halfway finished, it’s hard to say where the Canucks will ultimately place in the standings. Even so, the hypothetical moves that happened in the offseason actually result in the team having two more points than they do in real life. This also means that neither Benning nor Travis Green gets fired, as expectations are much lower and the club is surprisingly performing better as well.

So, there you have it! The Canucks would actually have more success over the past year had they executed Linden’s reported vision of a slower rebuild while having blue-chip prospects like Rossi and Coronato in the pipeline as well.
Of course, a lot of this is just our opinion, so feel free to comment what you think would’ve happened and give us your thoughts on this potential series too!
Uncategorized
Recent articles from Bill Huan