WDYTT: Should the Canucks go back to the black skate jersey full-time? 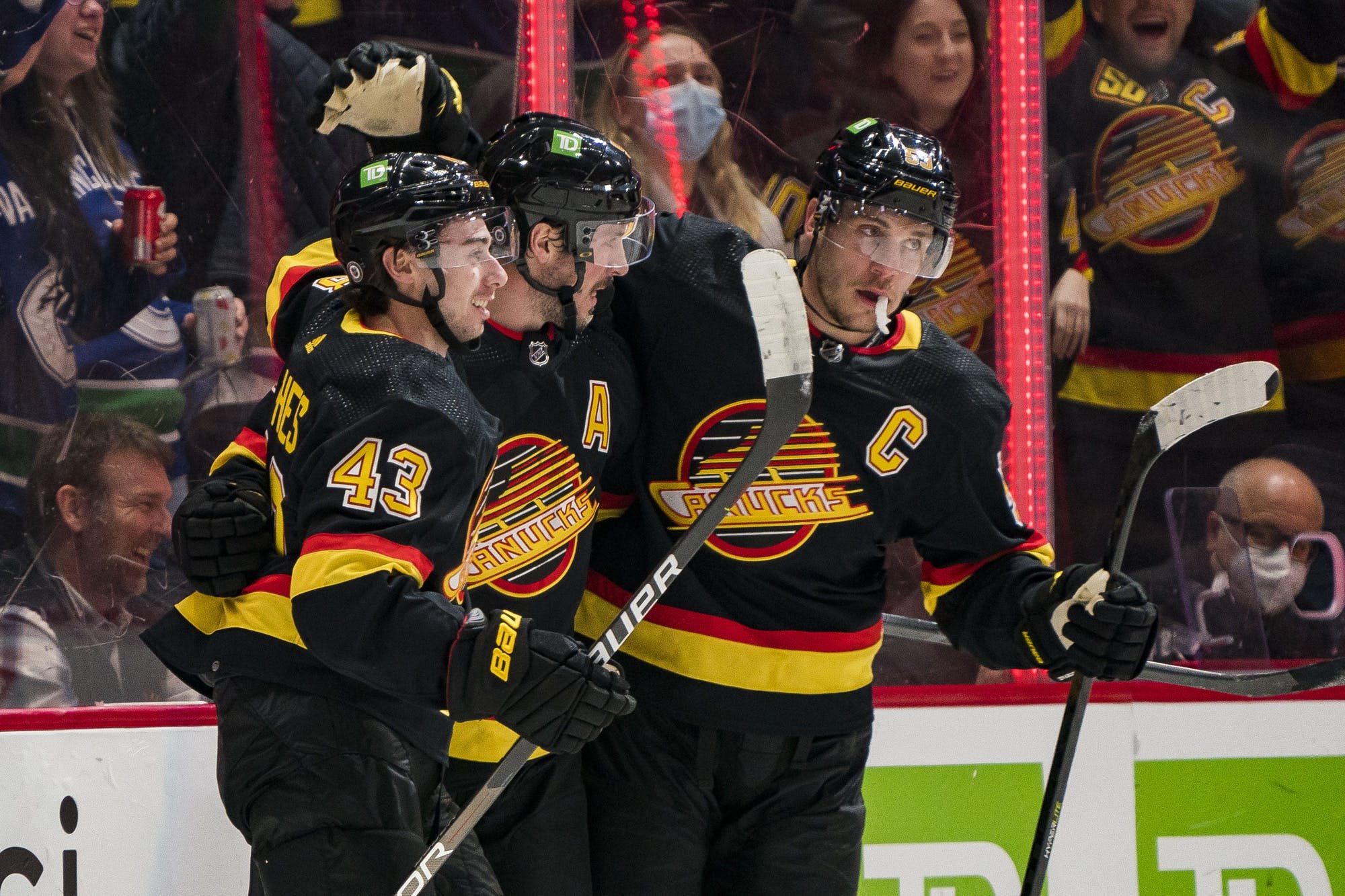 By Stephan Roget
10 months ago
Welcome back to WDYTT, the only hockey column on the internet with its own alternate font-and-colour scheme.
Speaking of alternate schemes, that old debate has reared its head in the land of the Vancouver Canucks once again. The Canucks slipped on their classic black skate jerseys in late February, proceeded to stomp the Calgary Flames 7-1, and reignited calls for said jersey to become the team’s permanent home design — along with, of course, calls in the exact opposite direction.
Really, there’s points to be made on both sides.
The black skate is the most popular jersey in team history, and what else is a jersey for, other than pleasing its fanbase? The style and colour combo have stood the test of time, and the ensemble still looks darn good in the year 2022.
On the other hand, there’s the factors of nostalgia and the frequency of appearances to consider. Sure, we all love the black skate now that we only see it a couple of times a year, but what happens when we start seeing it every night? Does the novelty wear off? Do we all start getting sick of it again?
There’s a debate to be had, and we’re going to have it right here.
Today, we’re asking you:

Should the Canucks go back to the black skate jersey full-time?

Is Elias Pettersson back (to normal)?

You answered below!
fv fan:
If Rutherford can manage to get some beef in the lineup to play with him effectively, I believe Petey will hit another gear beyond where he is now.
The only thing holding him back is the continual undeterred physical attention from other teams.
Kanucked:
I think he’s back. I would venture to say that he’s been the best forward since February 1st, JT Miller’s 2nd star award notwithstanding.
JDMay101:
I’d say he’s about 85% of the way there, which is good enough to make the Canucks a 95-100 point team, given the other players on the roster.
Unfortunately, they need to be about a 110 point team the rest of the way to make the playoffs.
Holly Wood:
There has to have been more going on than a wrist injury. In the first 3.5 months, he was getting knocked down more times per game than anyone I can remember.
TheRealRusty:
Boy… Are we all not relieved that management was not swayed by some fans who wanted him traded for peanuts earlier in the year? Yeah, he is back, but I would also like to see him dedicate himself to putting on another 20lbs for him to take the next step in his development.
neal:
Pettersson has looked much better with Pods and Hog. Hoping BB lets that line continue to develop chemistry.
J-Canuck:
(Winner of the author’s weekly award for eloquence)
This is the easiest question so far, Roget.
A triumphant yes! The shot, dekes and confidence is back. One thing I hope EP does work on in the off-season is skating. If he could get to top speed a little quicker, it would make a world of difference.
Hockey Bunker:
When he can play against first line players again, then he will be back. Right now, he is progressing against weaker competition
Easy points against third and fourth liners and on the PP are not a reliable indicator…
But I am encouraged that he looks like he is playing with more fire. Progress.
Kootenaydude:
He is getting better, but still isn’t at the level we need him to be at. He seriously needs to get bigger and stronger. Also, he practically refuses to try and score off the rush. He has to quit skating across the blue line, hitting the brakes, and then get muscled off the puck. He needs to keep evolving and creating more options. Otherwise, teams will just keep outmuscling him and taking the puck.
Craig Gowan:
I believe we saw peak Petey in his first half-year before the league figured him out. He was also good the rest of the first year and during his second year. I don’t think he’s back to that level yet, although obviously he’s been much better than earlier in the year.
BoHo:
What is Pettersson’s norm?
Because his norm seems to be not great, but he has been pretty darn good lately, so he is meeting our huge expectations.
A River Named Curt:
Not quite, but Petey is getting there. His shooting at the beginning of the season was godawful, missing the net routinely. But, he’s starting to snipe top corner more routinely. Once Elias is playing nightly against other teams’ top lines or checking lines, he’ll be back.
LiborPolasek:
Just like the team, all these young players are still learning to win together, and it is good that Boudreau has somewhat stopped the line-blending with EP and his linemates.
Although, due to the cap, some core pieces will be traded.
Putty:
Yup.
Uncategorized
Recent articles from Stephan Roget