WDYTT: Your favourite memory of the 2021/22 Vancouver Canucks season 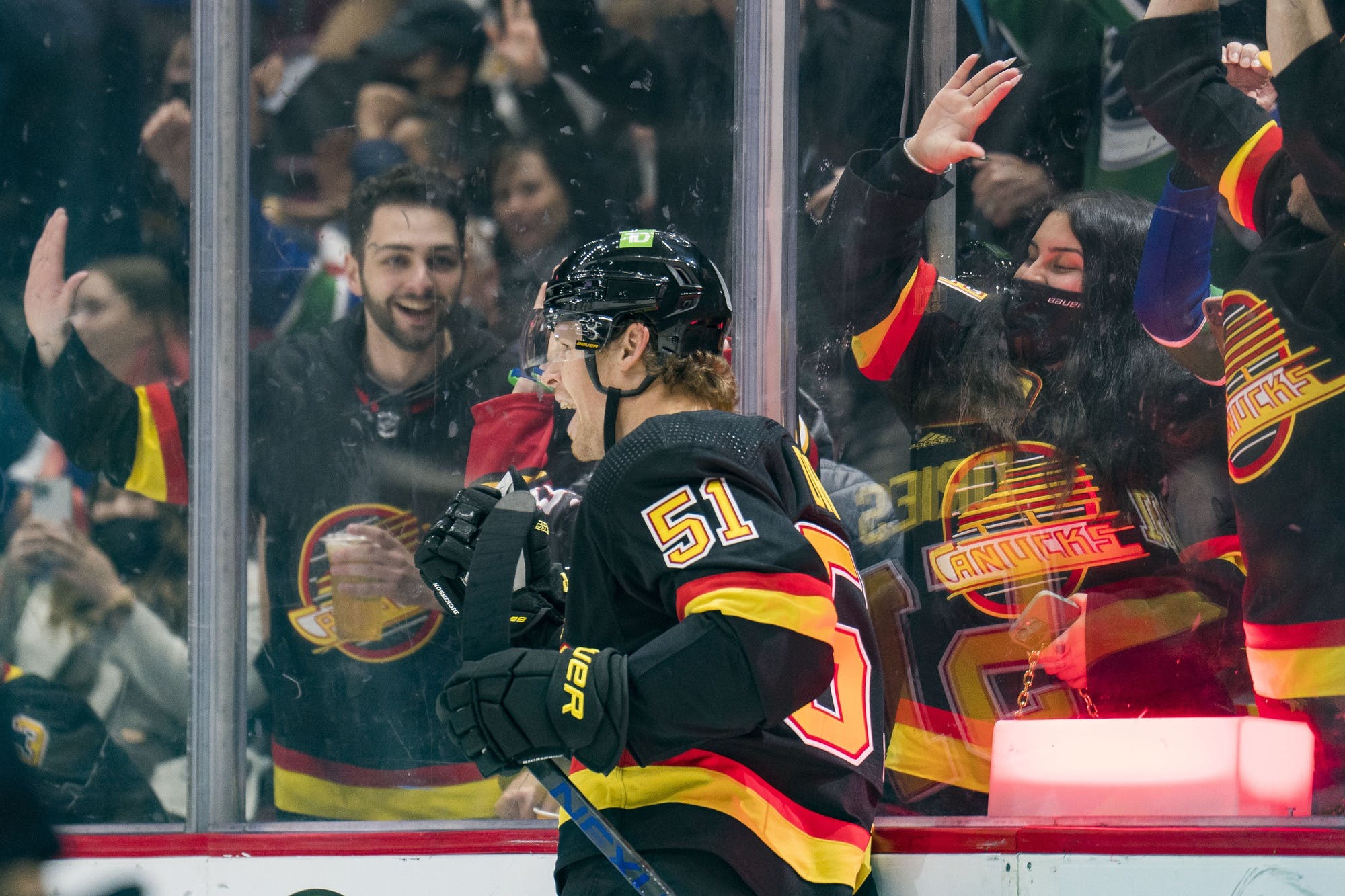 By Stephan Roget
7 months ago
Welcome back to WDYTT, the only hockey column on the internet that doesn’t have an offseason.
Speaking of the offseason, it’s upon us, for better or for worse. The 2021/22 season was certainly a memorable one for the Vancouver Canucks, even if it didn’t end quite the way that most would have wanted.
At the very least, it’s over now, and all eyes can be turned toward the future. But before we do that, we’d like to ask you to look back one last time on the season that was.
The 2021/22 campaign saw massive trades, a full-on regime change, and the introduction of the greatest chant in team history. It saw records broken, slumps defeated, and careers begun.
Perhaps most importantly, it saw Duncan Keith left in a bloody heap in the corner by Tyler Myers. Yes, we’re still going on about that.
This week, we’re keeping it simple and asking you:

Let it be known in the comment section.
Last week, Quads asked:

Which Canucks free agent players do you want back, and what contract would you give them?

You answered below!
harrythehammer27:
Boeser can be shipped out if not willing to take a paycut to stay. Lammikko at the right price, he has been great on the 4th line. They should try to find a younger FA, maybe from overseas or college, to try and replace Chiasson.
Harold Snepts:
(Winner of the author’s one-time award for only having 25% of an answer address the question)
Trade Dickinson. Drop Brock. Bring back Tryamkin. Sign Zadorov from Calgary.
Killer Marmot:
(Winner of the author’s weekly award for eloquence)
All the RFAs should be re-signed in both the NHL and AHL, but not for significantly more than they get now. This includes Boeser.
Of the UFAs, Halak is definitely gone. Martin is a better alternative in every sense. They should offer Sutter a contract, but as an assistant coach — perhaps in Abbotsford — not a player. His NHL days are probably through.
Chiasson, Petan, Dries, and Hunt should all be offered short-term contracts at about what they make now. Richardson, probably not.
Brian Togri:
UFAs? None really. Chiasson played well at the end, but I would still pass. Richardson, Sutter, and Halak are too old. Dries and Hunt are ok, but they are easily replaceable and I imagine they can get some younger, bigger bodies in there. Boeser, Lockwood, Lammikko, and Highmore are the only RFAs with the big team, so they are a ‘yes’ unless one of them gets traded.
BoHo:
Re-sign Highmore and Lammikko for $1 mil each. Re-sign Lockwood at $725k.
Sign Boeser to a three-year contract at $5.9 mil.
Dries for $800k. No re-sign Hunt. Rathbone at $875k.
Defenceman Factory:
Don’t care much if any of the UFAs are back. They were generally pretty good, but if you can find better players, by all means, sign them instead.
Re-sign all the RFAs. None are due big raises and all deserve to be back. Boeser is perhaps the exception. Even if he signs for below his qualifying offer, it will only be with some term and it won’t be for that much below the necessary offer. Boeser is a pretty good player who can excel in some areas, but this just isn’t the type of player I want to see incumbering 8% of the cap.
neal:
Let all UFAs walk if you can’t trade them or replace them for less.
Benning’s nightmare of overpaying has cost this team years.
And NO, Benning did not do a good job of making a competitive team over eight years.
Green was never a good NHL coach and Benning was never a good NHL manager.
JR may make a difference. Time will tell.
DooDaaMan:
I think “our” most important free agent signing that nobody is mentioning could be Motte! I would bring him back for $2M, with Highmore and Lammikko under $1M each. That was our best fourth line in years. Lockwood is a good bottom-six sub that could start in Abby, Chiasson earned a spot as a reliable top-six/PP injury replacement for $1M. Unfortunately, no room for Hunt, ‘cause Rathbone will arrive and give our D a new dimension next year. Nobody has scored more goals for the Canucks than Boeser since he arrived, and you don’t give up on guys like that. Our cap situation next year won’t be too bad if we can ditch Dickinson.
Craig Gowan:
I would sign RFAs Highmore, Lammikko, and Lockwood (next year’s fourth line) for about the same amount as they are making now. Ditto with Abby Canucks Rathbone and DiPietro. I wouldn’t object to Hunt, who significantly exceeded my expectations, coming back at a similar amount as a 7/8 D. Boeser is the big one to watch, obviously.
To me, management should attempt to secure the core three forwards long-term: Pettersson, Horvat, and Miller. If they extend Horvat and Miller, I’d be content to see Boeser go for a good young D. If they trade Miller and/or Horvat, I would attempt to retain Boeser for $6.5 mil or so over a middle term like two-four years. Chiasson did very well at the end of the season, but I would pass on him for a faster winger. I would pass on Richardson and Petan. Halak is obviously gone. I won’t comment on Abby extensively, but I think Dries, Rempal, and Di Giuseppe should get new contracts.
Uncategorized
Recent articles from Stephan Roget