WDYTT: Your expectations for Oliver Ekman-Larsson in 2021/22 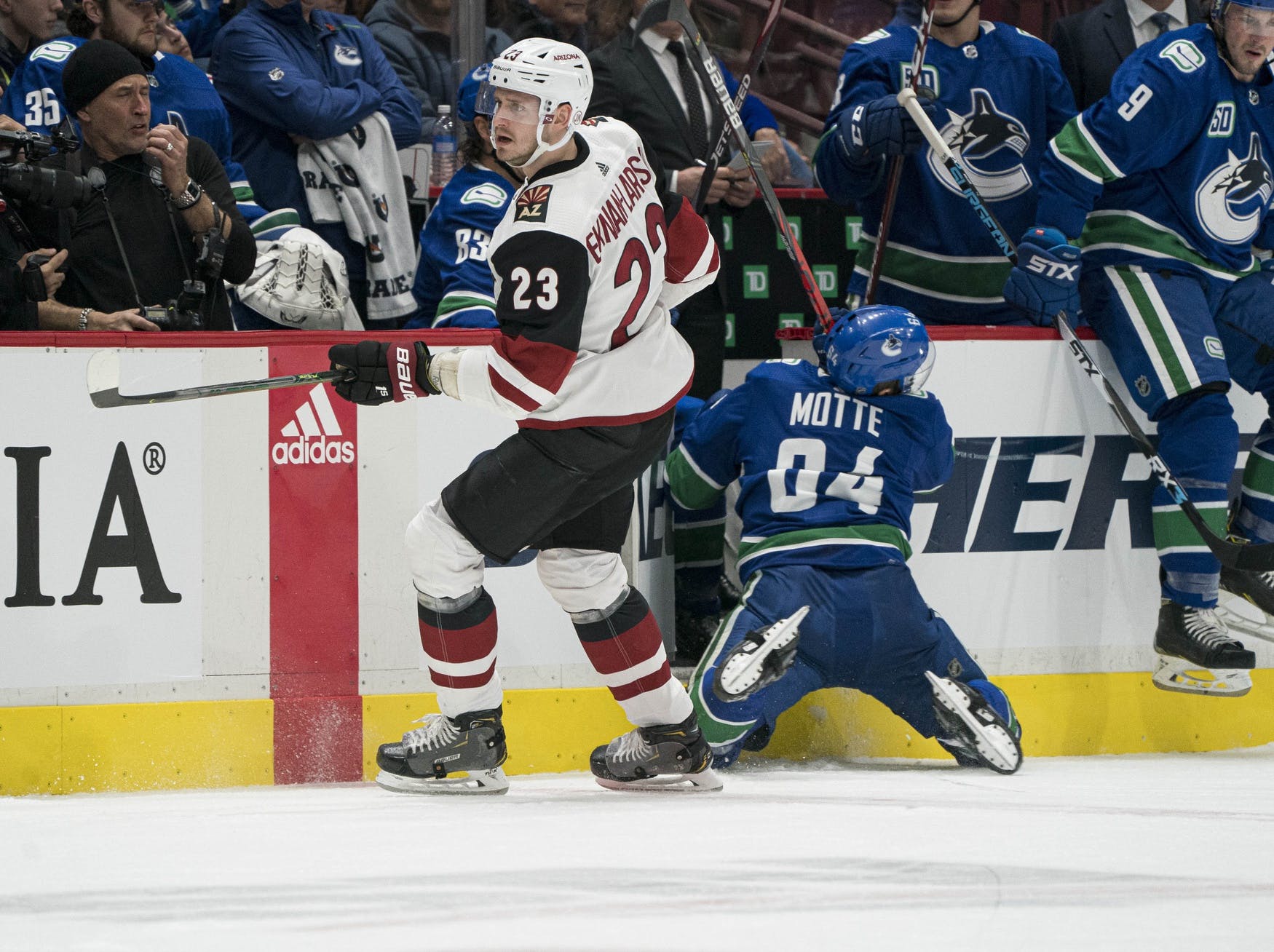 By Stephan Roget
1 year ago
Welcome back to WDYTT, the only hockey column on the internet to recently court controversy with a brief, but consequential, dalliance with a Tuesday.
We’re back in the middle of the week where we belong and, speaking of controversy, we’re here to talk about a player who has already become perhaps the most controversial on the Vancouver Canucks roster — before he’s so much as played a single game for them.
That’s right, we’re talking Oliver Ekman-Larsson.
The trade that brought OEL to the Canucks didn’t occur in a vacuum, and so he cannot yet be judged entirely as an individual, but that will come with time.
There are those already predicting a return to Norris contention.
There are those already predicting a further nose-dive into overpaid obscurity.
There are those taking a “wait and see” approach.
Few of the prognostications made about Ekman-Larsson’s immediate future with the Canucks, however, have been all that specific, and when it comes to specific prognostications, we come to you.
Where do you expect OEL to slot into the Vancouver blueline? Who will he partner up with?
How much is he going to play? In what situations? How much will he produce? What about those defensive metrics?
This week, we’re asking you all that and more, concisely bundled up into:

What are your specific expectations for Oliver Ekman-Larsson in 2021/22?

Who do you think will be the Canucks’ top ten scorers in 2021/22? And how many points will each of them get?

Your fantasy projections are below!
Burnabybob:
Pettersson will score 80 points this year assuming he can stay healthy. Hughes will score 70 points, Boeser and Miller will score 60 points, and Horvat and Garland will score 50 points. OEL and Hoglander will score 40 points, and Podkolzin and Pearson will score 30 points each.
7thD:
Pods will shock eveyone with his points totals this year. He has serious underrated playmaking ability. His passes in traffic are magic. Plus, for the first time ever, he will be playing with talent that can utilize his exceptional playmaking. Pods 50-60 (15g 35a) points. I’m calling my shot.
Marvin101:
I don’t know how many points they’ll get, but they should be fun to watch. They look like a good regular season team, but not too good in the playoffs, unless Demko stands on his head.
Jabs:
Petey – 82 points. Optimistic healthy year at a point-per-game.
Horvat – Career year, breaks 70 playing offence all year.
Garland – 68. Instant fan fav.
Miller – 65. Has some inconsistent stretches.
Huggy – 64, PP specialist.
Boeser – 62. Goals are back!
Hogz – 42. What’s a sophomore slump?
Podz – Slides into top-six, gets 40.
OEL – 52, connects with Petey, gets a fountain of youth.
Ten? Yes, I listed my top nine… Ten is interchangeable. Pearson, if he sticks on a scoring line, will for sure be there. If not, insert a random bottom-six player name or Rathbone here…
Killer Marmot:
With the possible exception of Brandon Sutter, one can’t predict injuries.
All one can do here is give point projections assuming no injuries, which is wildly optimistic. Thus, I would expect these projections to be on the high side.
Kunlun Red Star:
While many here are wildly speculating based on intuition, I have chosen to answer the question by way of a cognitive search through an Artificial Intelligence company which based their analysis on previous statistical data and the latest algorithms. The results are:
Petterson, 90 points. A breakthrough year with a healthy wrist and linemate support.
Boeser, 80 points. A beneficiary of EPs setups and opposition concentrating on other lines
Podkolzin, 68 points. Finally unleashed from his restricted role in the KHL and quickly makes Green a believer.
Hughes, 66 points. Lots of setup opportunities on an improved PP.
Miller, 63 points. See Boeser
Horvat, 55 points. Not much PP time but centering a good second line.
Garland, 52 points. Second line dynamo
Höglander, 49 points. Continued improvement and two-way play.
OEL, 40 points. Given more of a shutdown role with Myers.
Pearson, 33 points. Third line role.
Defenceman Factory:
(Winner of the author’s weekly award for eloquence)
I expect the Canucks to be quite high scoring next year, but other underlying areas may limit their success. Significant improvement to systems increasing time in the O-zone, reduced time defending, and serious power play improvement are needed. I think the forward personnel is there, but worried about the D and the coaching.
Canucks will need 250 goals to make the playoffs next year, maybe even a few more if they can’t keep the GA down. I think they will do it, but the underlying problems won’t all be solved and the player point totals might be a bit underwhelming as a result. If the underlying issues are well addressed, my point projections will be light.
Kanuckhotep:
Very arbitrary a subject and if a Ouija board is available, you might be able to address this issue with some clarity. I do foresee better numbers from our guys, but specifics smatter of absurdity. Wanna see Pods kick some butt out there, for example, but unless the whole squad is on the same page, we’re looking at the same old B.S. Don’t think we will though.
Axeman:
106.
MacEwen: Five Gordie Howe hat tricks.
Duncan Stewart:
(Winner of the author’s occasional award for predicting the next question)
Can’t predict the points leader, probably one of the Lotto Line. But definitely can predict that OEL will crater. He’s joined the Canucks, turned 30, and is signed to a max contract that will take him well past his prime (that was  four years ago). This is known as the Benning Effect.
Pettersson: 75. Miller, Boeser, Horvat and Hughes: all around 60. Höglander and Garland: about 45. Podkolzin and OEL: 35. Pearson rounds out the top ten at 30 points.
Gino’s 3rd Cousin:
Hi Stephan, I won’t give you points predictions, but I will give you my order and reasons.
7&8. Hogs and Podz – I can see them both coming into the half-a-point-a-game range. Podz may take some time, but I could see a late-season push once he gets comfortable.
Michal Pošvic
Petey – 80 (30+50)
Boeser – 70 (40+30)
Hughes – 60 (10+50)
Miller – 60 (25+35)
Horvat – 55 (20+35)
Garland – 50 (25+25)
Höglander – 45 (20+25)
Ekman-Larsson – 35 (5+30)
Podkolzin – 35 (15+20)
Pearson – 35 (15+20)
Uncategorized
Recent articles from Stephan Roget