WDYTT: Is Elias Pettersson back? 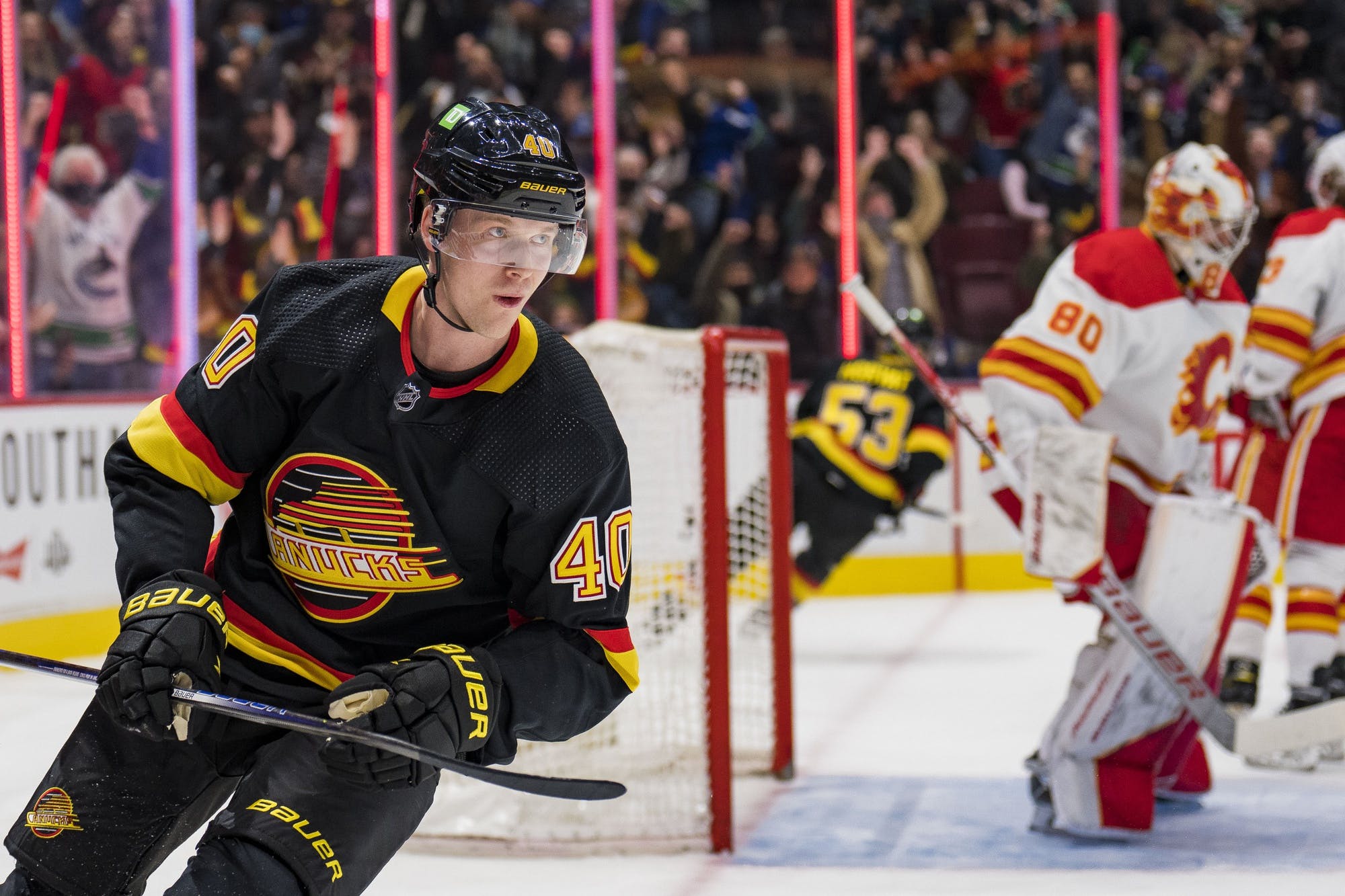 By Stephan Roget
8 months ago
Welcome back to WDYTT, the only hockey column on the internet that’s still backed up on a series of VHS tapes, for posterity’s sake.
Speaking of tape, that’s exactly what Elias Pettersson says he had affixed to his still-recovering wrist at the start of the 2021/22 season. But the tape is off now, and so is Elias — off to the races, that is.
After a dreadful start to the campaign, Pettersson has notched 27 points in 30 games since Bruce Boudreau took over, and an astonishing 11 in his last 6.
That seems like a lot of points. That seems like a lot better than Pettersson had been doing in the opening months of the season. It almost seems like Pettersson is back, baby…but is he?
We know that you, the loyal readers of CanucksArmy, have not been shy to share your opinions on Pettersson as the season has progressed. And we know you won’t be shy about it now, either.
Today, we’re asking you to make an honest assessment of the following query:

Is Elias Pettersson back (to normal)?

Which Canucks prospect are you currently most excited about?

You answered below!
Atlas:
None!
A River Named Curt:
“Excited” is too strong of an adjective for anybody in the Canucks’ relatively vacant prospects cupboard. But, I’m pleasantly surprised with Linus Karlsson putting up 19 goals so far in his SHL rookie season.
El Kabong:
Either one of the guys we get for Miller or Boeser.
Kunlun Red Star:
Earlier in the year I might have said Danila Klimovich or Aidan McDonough, but both players have gone cold. One player of interest is Lucas Forsell, who is reputed to be a speedy exciting winger with scoring ability. The Canucks best prospect continues to be Jack Rathbone.
Sandpaper:
2022 and 2023 draft picks.
Hockey Bunker:
Lockwood because of his great speed. I think he has a great future as a penalty killer and general disturber. Wait until Boudreau gets to see this guy…he’ll be gushing.
As soon as Dickinson is sent packing, bring him up.
For next year, it’s Viktor Persson. He will be a great add to Abbotsford and fits the mold of a mobile defenseman who can actually play defense.
Could be a regular in 2025.
Brian Togri:
I don’t see anything to get excited about. Rathbone is the best prospect we have, but his ceiling is third pairing LD as long as OEL is here.
Long on Hope:
Linus Karlsson!
Puck Viking:
Conor Bedard.
Punisher:
The prospect of the team returning to respectability with a long-term plan for success, versus the day-to-day “plan” of the Benning regime.
Defenceman Factory:
There just isn’t anyone in the prospect pool to be excited about. The cost of 4th line and bottom pairing UFAs has plummeted in recent years and not sure any prospects can be reasonably expected to be top-six, top-four players. I think there are enough prospects to think one or two might yet emerge.
If I have to pick a prospect I’m most excited about, it’s the 2022 1st round pick.
Kanuckhotep:
We’ve been waiting awhile for Aidan McDonough, so he piques my interest outside of Rathbone. If Aidan’s shooting acumen can translate to the bigs, what a steal he’d be for a 7th rounder.
Kanucked:
Brendan Gaunce.
Bo Ho:
Aidan McDonough or Rathbone!
Killer Marmot:
Rathbone. He’s been an offensive machine when he’s been healthy.
KearnsScoredOnHimself:
Klimovich.
LiborPolasek:
Would be nice, to have a legit reason to go to Abby, this season; but Cull seems to be, more interested in playing a mostly, veteran laden line up, full of NHL tweeners for a winning record. Preferably, I would rather see a bunch of prospects learning to win together, despite the record of the FARM team.
Currently, there is no prospect to get excited about in Abby and based on what I had seen with Lind, OJ, and Gadj — after years of reading the hype and then they just get waived — has got me very apathetic of the farm team. The farm team is supposed to be about developing the next group of players; and I am not sure if it is the last regime/the current regime in Abby, but the farm team has failed to deliver.
bigbobbyclobber:
I’m most excited about the prospect they haven’t traded for yet…is there still any buzz about Costmar or Zlodeyev??
Gino’s 3rd Cousin:
(Winner of the author’s weekly award for eloquence)
It’s hard to feel really excited about any of the prospects, as many have already mentioned in the comments. The two guys I was hoping would make a leap this year were Klimovich and Woo. For different reasons, I feel like I’ve tempered my expectations with both of them. Woo just hasn’t been able to stay healthy and establish any kind of momentum on his season. Hopefully, he comes back and finishes off strong. Klim probably should have played Jr. this year in the Q, but as far as adapting to the language and the pro game, maybe a year in Abby isn’t so bad. I still think he’s a couple of years away from challenging for a spot in Vancouver, but I think he has the most potential among the current crop of prospects.
Just wondering:
Prospects?
Craig Gowan:
I am not excited by any Canucks prospect, including Rathbone, although he seems to be the best prospect.
TheRealRusty:
Danila Klimovich. A boom/bust big and nasty power forward with a nice set of hands that isn’t afraid to deke or crash the net. He is the one with the highest ceiling (if reached… and it is a big IF).
JDMay101:
Their only prospect is Jack, so Jack.
Uncategorized
Recent articles from Stephan Roget 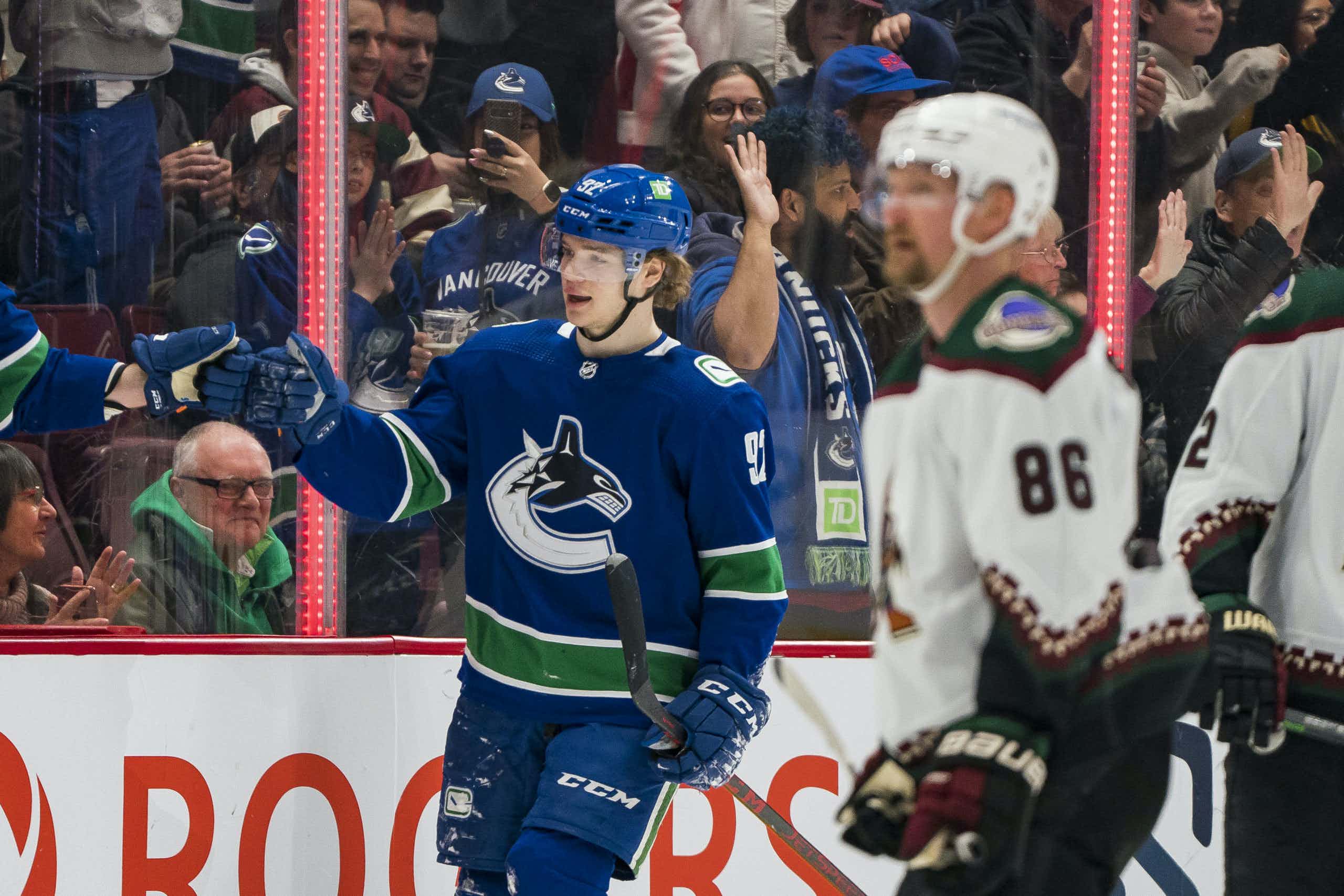