WATCH: Day one of training camp had a lot of intensity and that’s why the Canucks’ fourth line could be Joshua-Dickinson-Lazar 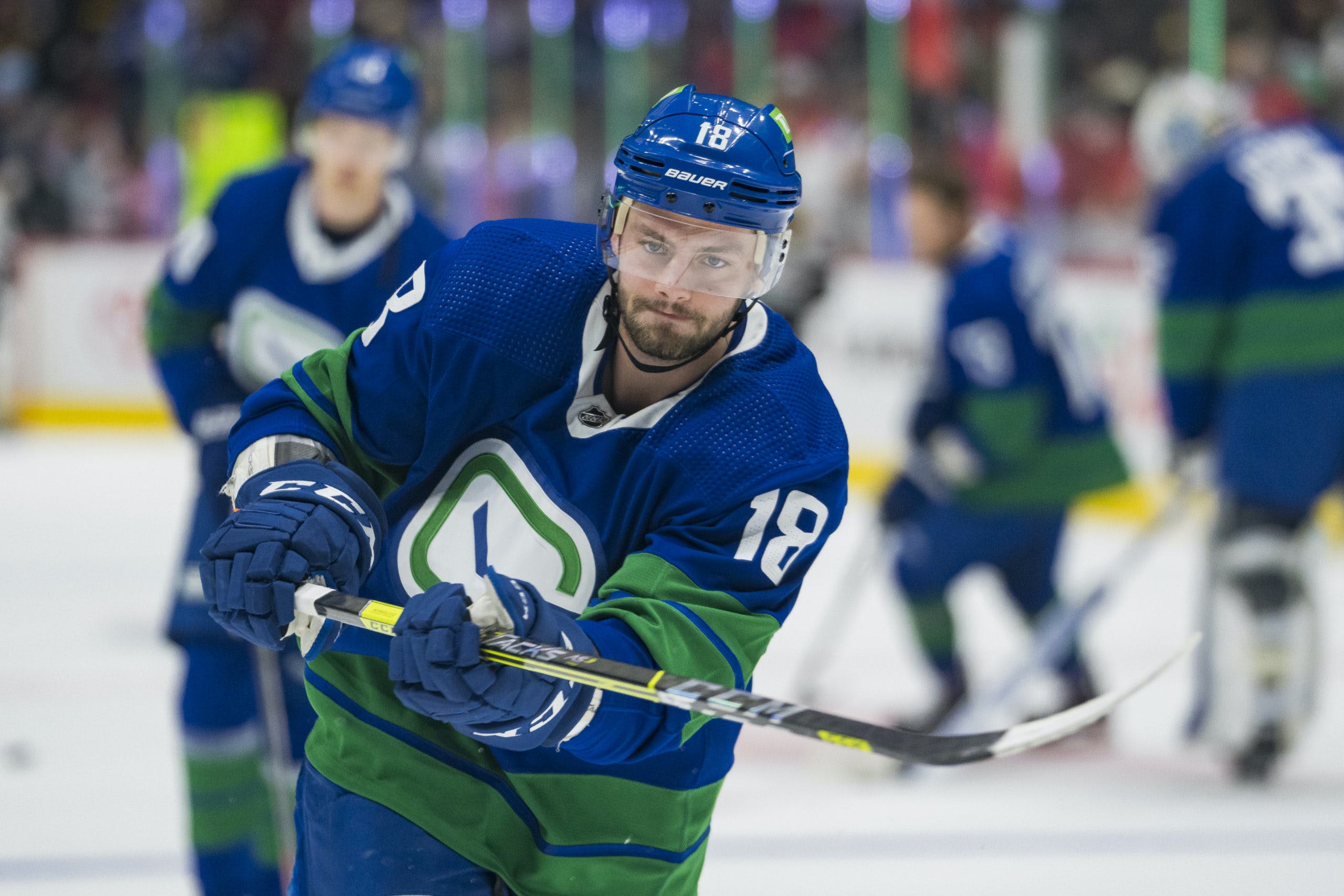 By Faber
4 months ago
The Vancouver Canucks kicked off day one of their training camp on Thursday morning.
Thursday was our first look at a Bruce Boudreau-led training camp. And with jobs to be won and lost, there was a lot of intensity during the drills and the scrimmages.
One of the drills that typically draws a lot of good battles is the short-rink scrimmage where we see a one-on-one or two-on-two with two goaltenders. J.T. Miller is typically dominant in these drills and he looked like it early in camp.
This drill saw some good intensity from AHLer Yushiroh Hirano, who had a really good battle with Quinn Hughes in a two-on-two drill.
The scrimmage was high-tempo as well.
We saw full-speed, back-and-forth hockey with lots of physical contact and the Canucks Twitter account spotlighted one of many hits from Luke Schenn.
We liked the battle at the crease between Conor Garland and Christian Wolanin. Though Wolanin was added as depth and should be a defenceman who plays most of the season in the AHL, he wasn’t holding back in a battle with Garland.
By the way, just watching this video, you love what you see from Garland and his ability to extend offensive zone possessions at five-on-five. If the trio of Garland, Bo Horvat, and Vasily Podkolzin sticks — there should be a lot of time spent far away from the Canucks’ net.
One of the lines that thrived in the high-intensity scrimmage was the trio of Dakota Joshua, Jason Dickinson, and Curtis Lazar.
Lazar’s high effort level is easy to spot. He’s all over the ice, throws a lot of hits and has a good pace to his game. Using Lazar on the fourth line is going to be a much different look for the Canucks compared to the fourth lines they have trotted out in past years.
Dickinson lined up at centre, but Lazar is more than capable of playing the position as well.
Here’s a short clip of what this line is all about. It has a neutral zone interception by Joshua near the beginning, and a strong hit from Lazar at the end.
As a BC-born kid, Lazar is ecstatic to be a part of his home province’s team and is willing to do whatever is asked of him. He will bring that intensity whenever the team needs it and spoke about that when he met with the media on Thursday afternoon.
“I think my role just speaks for itself,” said Lazar. “It’s a gritty game, it’s hard-nosed, it’s hard to play against — defensive first — and ultimately just whatever is asked me. If I’m playing down the middle, if I’m playing the wing, killing penalties. Whatever it is, I think I can offer a lot. I really like you know, kind of reading the full game. If we need a big hit here or there — whatever is asked of me, I’m going to do it.”
Day one was an indication that Nils Höglander might not be the type of player that Bruce Boudreau wants to use on his fourth line.
Höglander is a better offensive contributor than all three of Joshua, Dickinson, and Lazar but from the look of that trio, it’s more about the type of play style that Boudreau might want to see on his fourth line.
Both Joshua and Lazar impressed us on day one of camp. Both have good pace and you can see why teams were interested in them when they were free agents in the summer. Dickinson was playing centre on day one but perhaps there’s another day before the season where we see a Höglander-Lazar-Joshua line. This would be a high-energy line where Höglander’s lack of size is made up for by Joshua’s abundance of size (6’3″, 200+ lbs).
We may see some changes to the lines for day two but there was a lot to like from day one and it seemed like Boudreau challenged everyone to show some fight for day one. We will see how the battles continue into day two.
Content
Recent articles from Faber