‘I want to be a Canuck’: Despite not signing, Aidan McDonough says the plan is still to sign in Vancouver 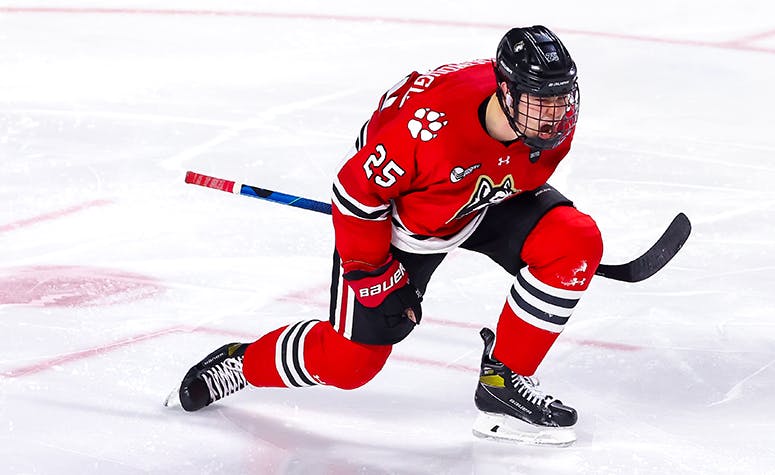 By David Quadrelli
10 months ago
Yesterday, Vancouver Canucks prospect Aidan McDonough decided that he’ll return to Northeastern University for his senior year of collegiate hockey.
With that decision, McDonough opened the door for the possibility of becoming an unrestricted free agent and signing with any NHL team next summer.
According to McDonough though, he doesn’t plan to exercise that option. Instead, he currently intends on signing with the Canucks after his senior year.
“It is,” said McDonough in an interview on Donnie and Dhali – The Team when asked if the plan is to eventually sign with the Canucks. “I’ve only played for a few teams my whole life. I’ve been a loyal person my whole life. I stayed at prep school for years when I could have left. You know, really loyal to the team that drafted me, especially taking me in the seventh round, and they’ve treated me unbelievable.
“I think this is a great spot and management’s vision for the club and the prospects and the way they want to develop guys. Get a bunch of prospects in the system, develop them, and bring them along and let them be the best players that they can be — I’m really excited for that vision.
“My best friend [Jack Rathbone] is part of the organization and has nothing but unbelievable things to say about everyone in Vancouver and in Abbotsford and the coaching staffs in both places, and I think this is a great spot for me and any young prospect coming up — you want to go somewhere where they’re going to push you to be the best version of yourself, and I think that’s in Vancouver.
“I love the city as well. I’ve only been there once, hoping to get there again this summer for development camp, but it’s an amazing spot and it’s where I want to be.”
The 22-year-old left-shot winger scored 25 goals through 38 games for Northeastern this season, adding 14 assists in the process.
The Canucks have until August 23rd, 2023 to get McDonough signed, and it sure sounds like that will be exactly what happens.
Uncategorized
Recent articles from David Quadrelli