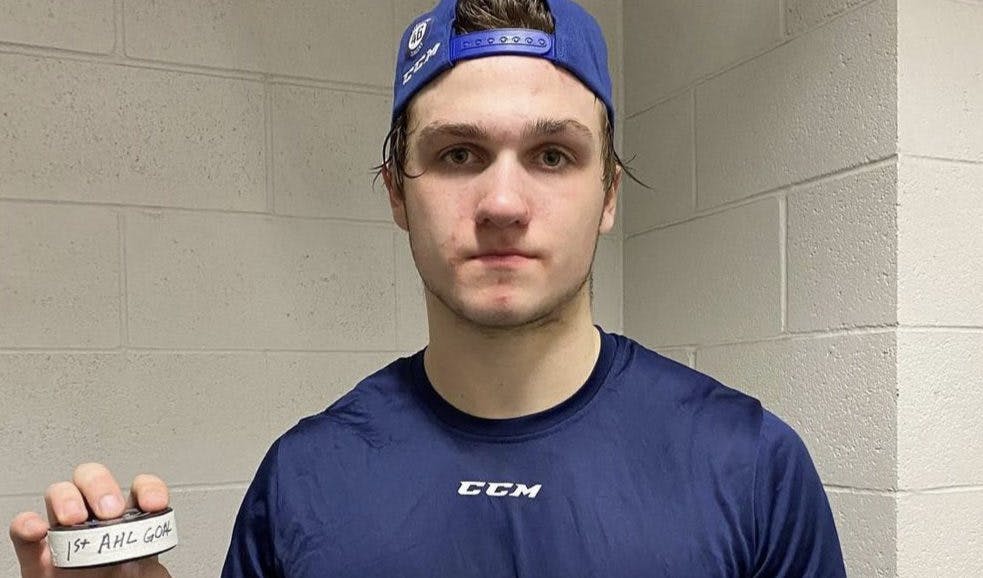 By Faber
1 year ago
It didn’t take long for Danila Klimovich to find the back of the net in the AHL.
The 18–year-old made his AHL debut on Saturday night as the Abbotsford Canucks played the Bakersfield Condors in what was their first of three games in four nights.
The Canucks fell to the Condors by a score of 5-3 and were severely outshot by a count of 32-22.
It’s not an ideal start for the Canucks but there was a bright spot in the game.
The Canucks’ top pick in the most recent NHL Entry Draft scored his first AHL goal in the second period of the season opener.
Klimovich found open ice in front of the net and didn’t hesitate for a second when the puck landed on his stick.
It was an okay debut for Klimovich. He had the goal but was on the ice for two goals against early in the third period when the Condors struck quickly to tie the game and ultimately score the game-winning goal.
Parts of his game definitely need work and the defensive side of the ice is where the main focus should be. There were times where his effort level was low and that is for head coach Trent Cull to handle as he will surely expect more drive from Klimovich in his own end.
There were slivers of his offensive skill shining throughout the game as he continued to justify the Canucks drafting him in the top half of the second round in the most recent draft.
Klimovich played on the second power play unit and finished the game with two shots on net.
After scoring his first AHL goal, Klimovich is surely to gain some confidence. His lack of defensive coil will surely be noted by Cull and could result in less ice time if it continues.
Cull told CanucksArmy that he has been breaking out the Google Translator app quite a bit with Klimovich and wants to work with him on a lot of things in his game. Cull also mentioned that because of the strange start to the season, he just wants his team play a few games before he makes too much judgement on them.
The Abbotsford Canucks don’t have much time off at they are back in action on Sunday at 5 pm to face the Ontario Reign before getting back on the ice Tuesday for another bout with the Reign.

Tidbits from the farm

The other two goal scorers on the night were Justin Bailey and Jarid Lukosevicius, who had two points on the night.
DiPietro saw a ton of high-danger shots on the night and stopped 27 of the 31 shots he faced.
Will Lockwood also dropped the gloves in a fight with Condors’ captain Brad Malone:
We will keep you posted on the Abbotsford Canucks and will be keeping a close eye on Klimovich as the season progresses.
Uncategorized
Recent articles from Faber