Vasily Podkolzin speaks about not understanding the movie “Dune” with Quinn Hughes, the Toronto Maple Leafs’ curse, and his rookie party 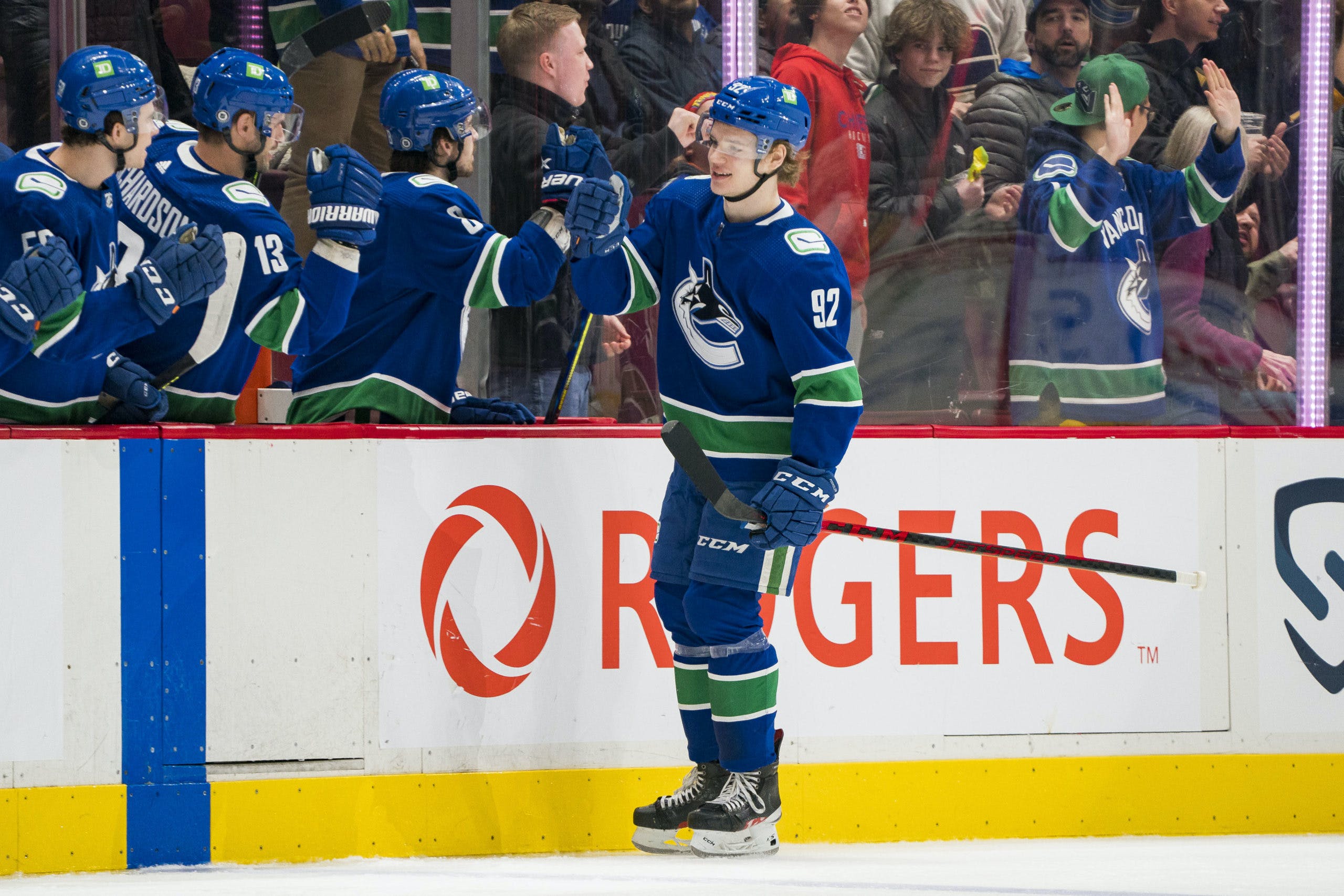 By Faber
8 months ago
Vasily Podkolzin spoke with Daria Tuboltseva of Sport24 in Russia.
We translated the article and wrote about the hockey-related stories HERE.
Podkolzin also told some stories about being away from the rink.
He told a story about being on the first road trip and going out to a movie with defenceman Quinn Hughes. The two youngsters went and watched the movie “Dune” and each left the theatre with more questions than answers.
“When it was my first trip of the season, Hughes took me to the movies,” said Podkolzin. “Back then, my English was just terrible. We went to the movie “Dune” and I didn’t understand anything at all. I sat for 2.5 hours and couldn’t understand anything. Hughes then said, ‘well that was hard to understand even for me.'”
You’d think that Hughes could have maybe picked a simpler movie for Podkolzin’s first North American theatre experience. For those of us that have seen the movie Dune, I think we all left that theatre confused about what we just saw.
Podkolzin also spoke about his wife being crucial for getting him out of the house and seeing the city. He said his wife Sasha isn’t a huge fan of movies but really enjoys getting out and seeing the city.
“I’m not a fan of walking or doing anything at all, but, thank god, at least my wife pulled me out, otherwise it would definitely be sour,” said Podkolzin. “I lived in an apartment in the arena building, if it wasn’t for her, I wouldn’t have gone outside at all.”
Coming to a new country can be hard but Podkolzin said that Hughes was a big help in getting him to feel comfortable.
“The best thing to do is not be afraid to speak,” said Podkolzin. “You’ll still be understood, even if you say nonsense, they will nod or smile at you. Or they’ll ask again. When I was learning English, Hughes began to ask what exactly I had said. I had to explain what he had told me, so he knew if I understood him or not. That helped. It would be worse if I kept quiet.”
Podkolzin said that he and Hughes, “communicate quite well” even from the early stages of Podkolzin learning English.
He also learned about the Toronto Maple Leafs and said he was told they are cursed.
“I don’t know what’s wrong with them. They are said to have been cursed. With such a composition, not to pass the first round is amazing.”
Podkolzin mentioned that his wife Sasha doesn’t have the most knowledge of hockey but that she was impressed by watching how good Auston Matthews was when the Leafs came to Vancouver.
He also talked about the Canucks’ rookie party. He said that the rookie party took place in Nashville and that each of the rookies paid $5,000 for the party and he was happy with the night because there were four of them. They ended up having a great night with a musical performance from Nils Höglander.
“There were four of us, Höglander, me and two guys who didn’t have a party, but they’re older. We were playing in Washington, D.C., and we had a day of rest before the game in Nashville. It is the capital of country music. We went to a restaurant, Höglander was trying to sing a song and I said a Russian toast in English. Everyone seemed to like it.”
It was fun to see Podkolzin grow more comfortable as the season went on and we expect to hear more fun stories from the 20-year-old as the years go on.
We’re not confident that he will rewatch “Dune”.
More from CanucksArmy:
Uncategorized
Recent articles from Faber