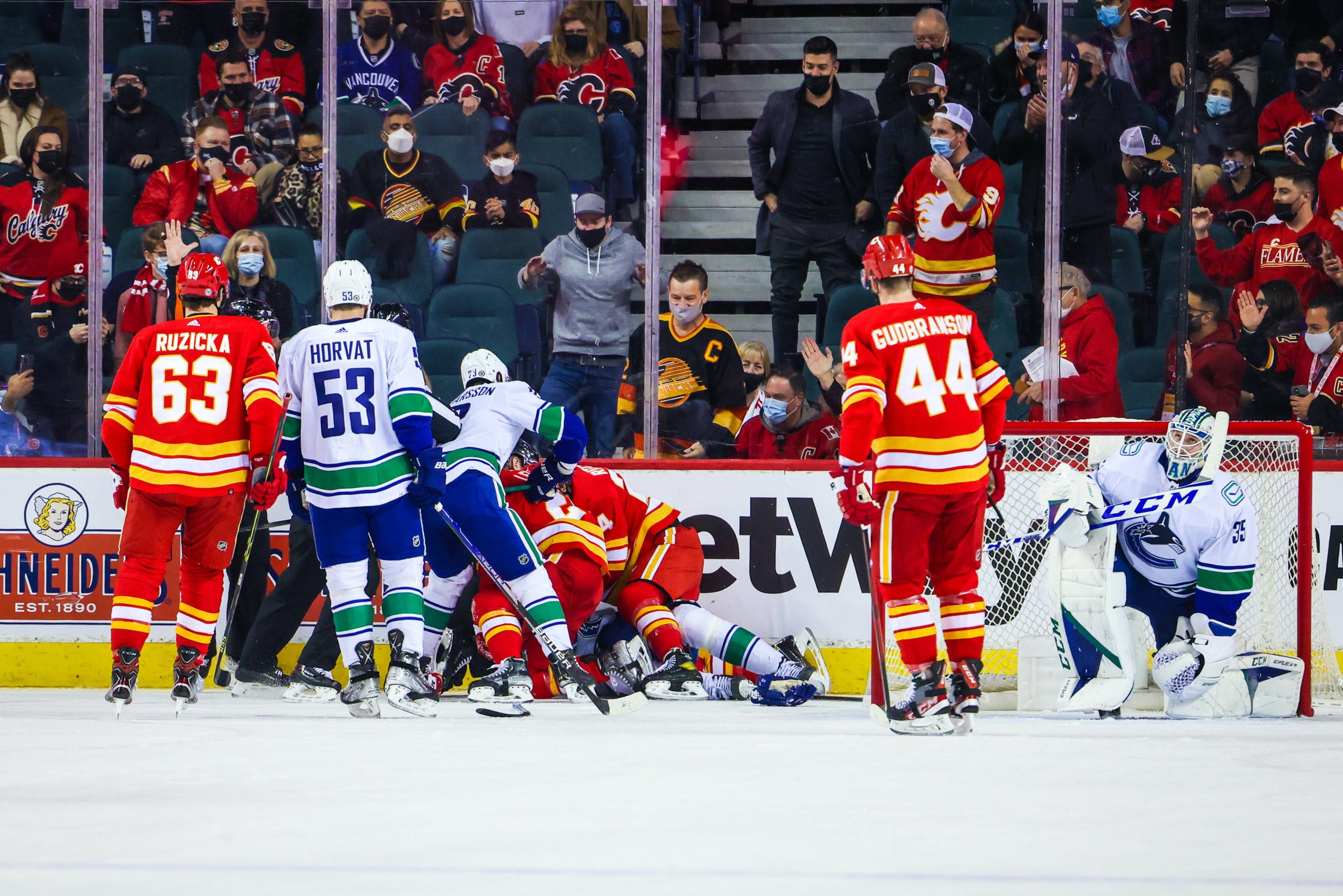 By Faber
10 months ago
Hockey day in Canada concluded with a Saturday night bout between the Canucks and Flames in Calgary.
The Canucks’ lineup was boosted with the return of their captain to the lineup. Bo Horvat said that he was able to skate with the Seattle Thunderbirds as he awaited his time in COVID protocol to expire. Horvat said he had absolutely no symptoms during his COVID situation.
With Horvat’s return, the top-six looked much better and gave a boost to the middle of the lineup.

Nils Höglander slid down to the fourth line, Noah Juulsen jumped into the lineup and Elias Pettersson moved to the wing.
Another big addition came with all-star goalie Thatcher Demko taking the crease for the Canucks. Demko would battle against his friend turned foe, Jacob Markstrom who has had a below .900 save percentage since December 5th.
The final game of hockey day in Canada was underway for these pacific division rivals.
Let’s go!

The first five minutes saw only one shot hit the net as the game was off to a clunky start. Neither team was able to string together three passes in the offensive zone until the 14-minute mark when the Flames had some sustained pressure in the Canucks’ zone.
The first penalty of the game went to Brad Hunt when he was sent to the box for tripping with 12:50 remaining in the period. The Flames had one shot on the power play and the Canucks were able to kill the minor penalty.
The one shot from the Flames’ power play was more shots than the Canucks had in the first 10 minutes of play as they were held without a shot in the early phases of this game.
Tyler Myers threw a hit that resulted in a five-minute major as he made contact to the head on Trevor Lewis. The play was reviewed and Myers was ejected from the game after the referees determined that it was direct contact to the head. With 6:58 remaining, the Flames went to work on a five-minute power play.
The Canucks did an excellent job in the first three minutes as Tyler Motte had a scoring chance and the Canucks were consistently clearing the puck out of the zone. The next two minutes were also highlighted by the Canucks’ stellar penalty killing and they were able to escape the five minutes of shorthanded time in a scoreless game.
You could hear the Canucks fans in the crowd cheer as the Canucks built momentum but now had a serious uphill battle to overcome without their top right-shot defenceman.
The best Canucks’ opportunity of the period came when Vasily Podkolzin attempted a buzzer-beating shot in the final second of play in the period.

Well, the Canucks had one shot on net, they killed off a five-minute penalty and lost their top right-shot defenceman. It wasn’t a great period for the visiting team. Losing Myers forced much more pressure onto Luke Schenn and Noah Juulsen. The Canucks needed to overcome a tough first period if they wanted to come out of this game with a victory but the good thing was that the game was scoreless after the first period.

It was more of what we saw in the first period as the Flames won the faceoff and immediately had a scoring chance where they drove the net, and Horvat took a hooking penalty just 10 seconds into the period.
The Canucks were able to kill off the penalty and that famous “since last shot” clock came up to let everyone know it’s been another 10 minutes without a shot on net. The Canucks only had one shot on net through the first 23 minutes of play.
With 16:25 remaining, Quinn Hughes took a high stick to the face and earned the Canucks their first power play of the game.
It was a shotless power play attempt and the Canucks were stuck with only one shot on Markstrom as the game approached the halfway mark.
Demko was looking like he didn’t miss a beat as he was locking down the Flames through the first 30 minutes of play. He saw 16 shots on net at the halfway point of regulation and was locked in against the Flames’ shooters.
The Canucks had some quality pressure with the Miller line but it ended with Johnny Gaudreau having a breakaway and being hooked by Schenn. Gaudreau earned a penalty shot and went in on Demko, attempted a shot to the glove side, but Demko shrugged his shoulder into the open net and made a big save to keep the game at a 0-0 tie.
Markstrom saw more action in the period but not enough to crack his shutout hope as the Canucks were outshot 20-8 through 40 minutes.

It was a strong showing from the defence core who was missing Tyler Myers. Hughes was moving with a ton of pace in the offensive zone and Oliver Ekman-Larsson stepped up big time in the second period. The Canucks were good in front of Demko and cleared loose pucks quickly. They weren’t great offensively through 40 minutes but their defensive game was applaudable and was keeping them in a scoreless game.

It was a quick start to the period as both teams pushed for the first goal of the game. Podkolzin got behind the defenceman as Garland flipped a puck to him but it bounced over Podkolzin’s blade and into the corner. Demko continued to stand tall as he challenged shooters throughout the beginning of the third period.
Nils Höglander took an unnecessary elbowing penalty off of a faceoff with 12:39 remaining in the period. He just flew his right elbow into Dillon Dube’s face at centre ice seconds after a draw. It was a bad penalty to take.
The Canucks killed off the Höglander penalty and were back to five-on-five with just over 10 minutes remaining in the game.
Garland was working in the corner and drew a tripping call on Dube with 9:19 remaining. The Canucks were given a huge opportunity with a commercial break to prepare themselves for the man-advantage that was about to come.
The power play came and went with little to no offence at all for the Canucks. They were unable to even get set up during the two minutes while skating with a man up.
OEL took a high stick to the face with 3:57 remaining and the Canucks went back to the power play late in the game. The power play was once again just horrible and it felt like this game was destined to be a 1-0 win.
The seconds ticked away and we were off to some three-on-three action just hoping and praying for a damn goal.

Miller wound it up and made a rush but lost the puck after appearing to be hooked by Elias Lindholm and the Flames came right back on a three-on-two that ended on Gaudreau’s stick who wired a slap shot past Demko.
Canucks head coach Bruce Boudreau had some pointed criticisms for Miller’s lack of a backcheck on the goal that ended up resulting in the Calgary win.
1-0, Canucks lose.

It was another one of those games where the Canucks didn’t have a top performer aside from their goaltender. Demko made 31 saves on 32 shots and faced 28 scoring chances against. It was good to see Demko back in form and that was likely the only positive you could take away from the game.

It was a boring game through and through. Demko was able to hold the Canucks in the game long enough to earn a point.
This is the type of game where you rinse it and get back to the next game. We’re going to do the same with this post game report.
The Canucks are back in action on Monday and Tuesday with the start times being 4:30 and 5:00 pm.
Hey commenters, what should the Canucks get in return if they trade Miller?
Uncategorized
Recent articles from Faber