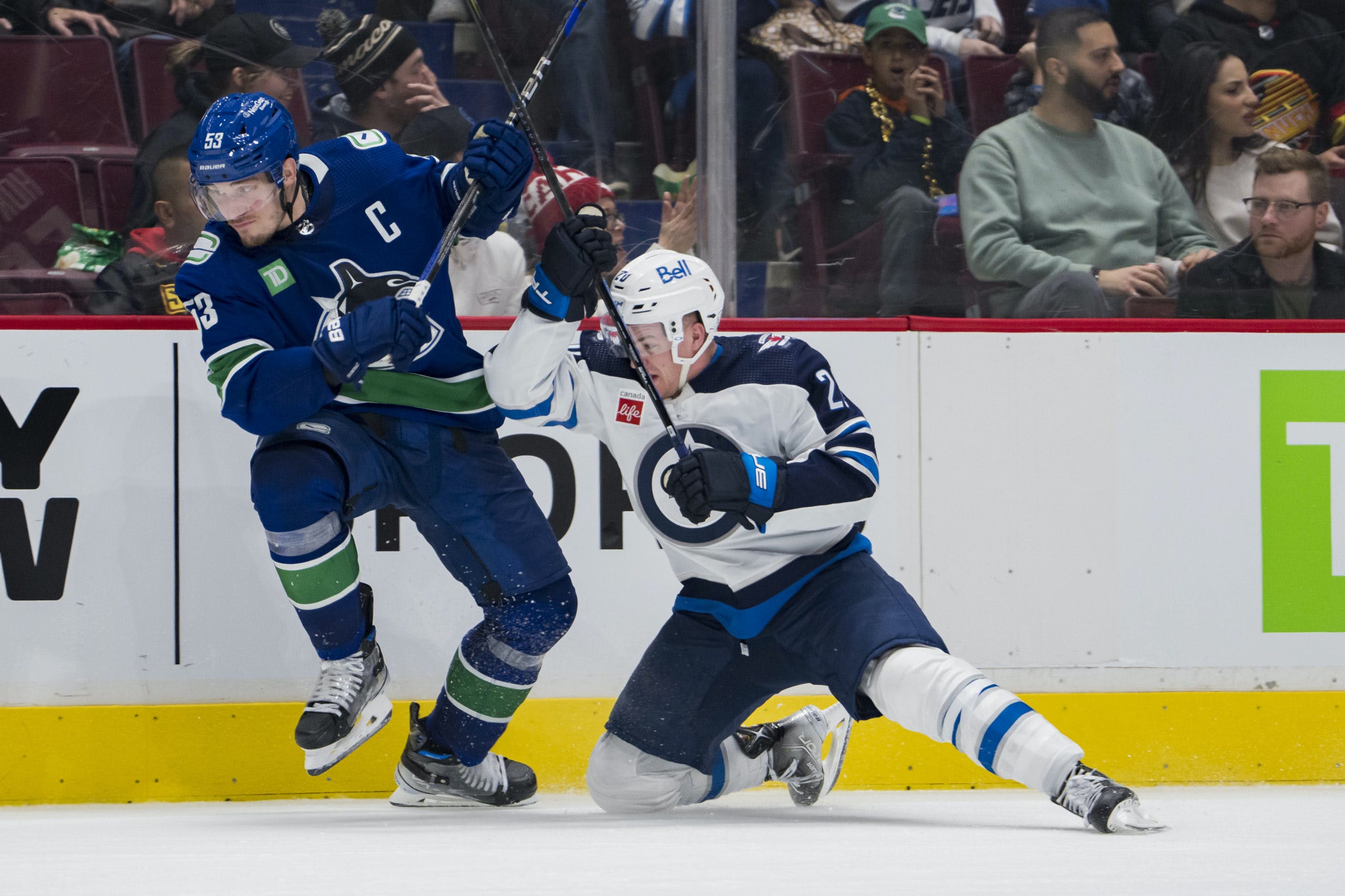 By Lachlan Irvine
1 month ago
The Canucks’ 5-1 loss to the St. Louis Blues at Rogers Arena on Monday sunk the franchise to a new low. A low even deeper than the previous one set by their 5-1 defeat at the hands of the Winnipeg Jets on Saturday.
The season is barely two and a half months old and the Canucks have lost by the same four-goal deficit five times, an NHL record in futility for a home team.
Throw in the occasional jersey on the ice, choruses of booing and, last night, a chant for ownership to sell the team, no building has been more hostile for the Canucks to play in than their own. The team only has themselves to blame for it.
It wasn’t always this way.
Throughout the mid-2000s to the mid-2010s, GM Place/Rogers Arena was an incredibly hard place for opponents to play. Strong Canucks teams, a vastly emotionally invested fanbase, and the infamous nightlife at the Roxy all contributed to a home-ice advantage that earned the Canucks upwards of 20+ victories a season. Even last year, the Canucks wound up with 20 wins at home, as fans fully got behind a new front office and a new coaching staff.
That all feels like an eternity ago now. Games look far from sold out, and the fans that do show up lately seem to either leave early to beat the SkyTrain traffic or stay to voice their displeasure until the bitter end. The on-ice product has taken a dramatic nosedive, while the team still tries to convince fans they can compete for a playoff spot.
And now, the results are heading in a historic direction.
After playing 15 of their 41 scheduled games at Rogers Arena, the Canucks have already lost nine. For context, the franchise record for home losses in a season is 22, set by the infamous 1997-98 team led by Mark Messier and Mike Keenan.
The NHL’s all-time record for home losses in a season is 32, set by the second-year San Jose Sharks in 1992-93. The mark sits a full three losses ahead of the next closest teams, the 1983-84 Penguins and the 1993-94 Senators, and is virtually unbreakable in today’s NHL.
Right now, the Canucks are on pace for 24.6 losses at home. Even if we ignore the rules of mathematics and round down to 24, it would not only still break the team record, but it would also put the team in a tie for the 27th most losses in a single NHL season. Give them one more defeat, and they land in 21st.
But it gets worse.
That 1997-98 mark also came in an era where points for overtime losses didn’t exist, meaning any defeats in extra time — in this case, two — were put in the same stat box as regulation ones. Thanks to the introduction of the OTL category in the 1999-2000 season, it became a lot harder for teams to set new loss records.
At the Canucks’ current pace, they’ll break that record based on regulation wins alone. Throw in their sole shootout loss to the Predators, and they’re basically halfway there already with 64% of their home schedule left.
It’d be one thing for the Canucks to go on this disastrous trek with a real pot of gold at the end of the rainbow; a solid plan in place to rebuild the team from scratch into a Stanley Cup contender. But right now it feels like the team is on a one-way trip to the bottom of Mariana’s Trench, and all they’ve brought underwater with them is a shovel.
The only good news comes in the form of what happens to a lot of the teams that set those infamous records. A number of those teams earned the first overall pick in the draft and began rebuilding the foundation of their franchises into perennial contenders. Just ask the ’84 Penguins, who lost 29 games at the Pittsburgh Civic Arena and got Mario Lemieux for their troubles.
With a clear plan to put the team on track, as passionate a fanbase as the Canucks have could easily find the silver lining to losing a record amount of home games. The same fans that booed the Canucks off the ice in three consecutive home games also raucously cheered for the Timbits hockey players and the players’ dogs racing across the ice during intermissions. You just have to give them a real reason.
Until then, it’s going to be a long, long year on Griffiths Way.
Editorials
Recent articles from Lachlan Irvine